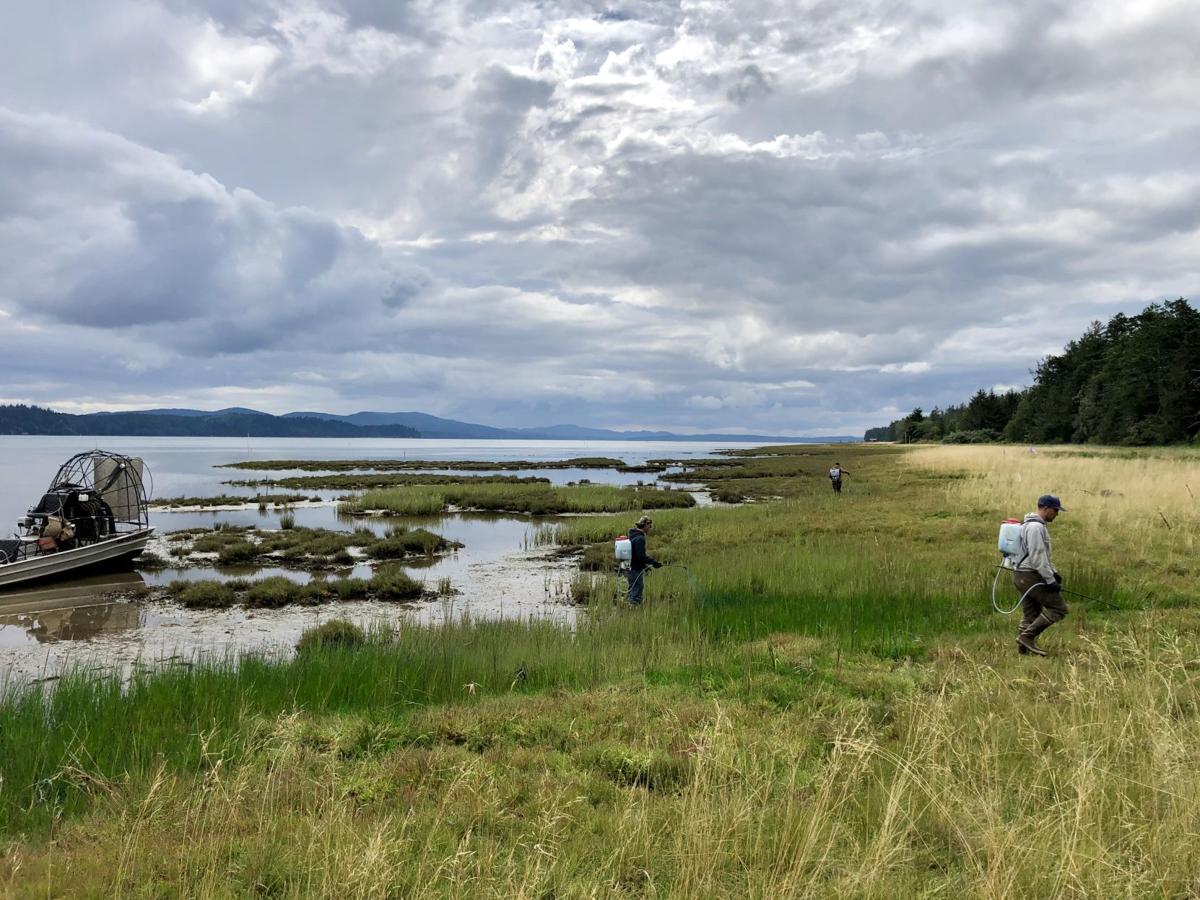 Employees from the Pacific County Department of Vegetation Management spray coloring on areas of spartina to mark where herbicides are needed. The department sprayed the property of the Moby Dick Hotel after almost a decade long legal battle between the hotel owners and Pacific County officials. {/span} 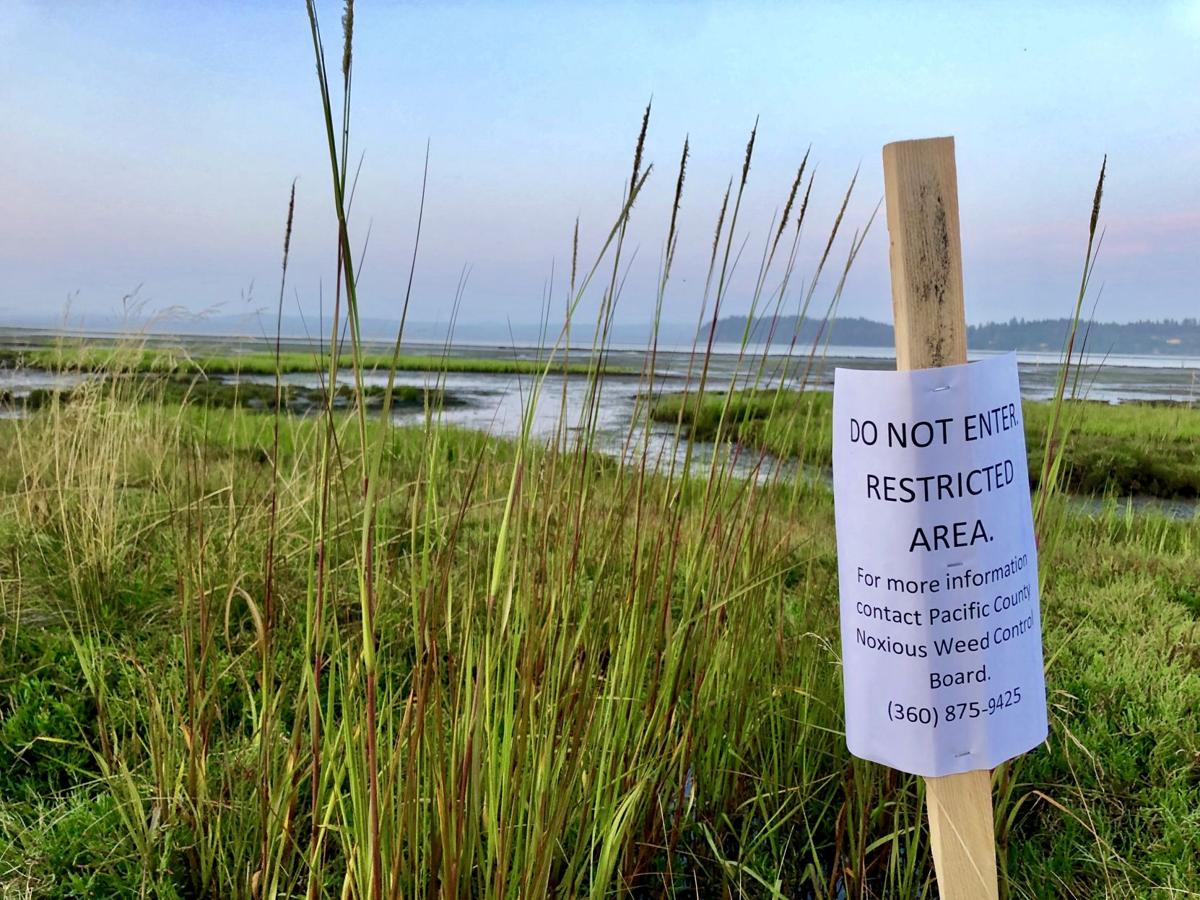 Employees from the Pacific County Department of Vegetation Management spray coloring on areas of spartina to mark where herbicides are needed. The department sprayed the property of the Moby Dick Hotel after almost a decade long legal battle between the hotel owners and Pacific County officials.

NAHCOTTA — The last spartina stronghold in Willapa Bay was sprayed with herbicides in early August, ending more than a decade-long fight between the owners of the Moby Dick Hotel and Pacific County officials.

Herbicides are considered by the state as the best way to kill spartina and control the threat it poses to Willapa Bay, said Jeff Nesbitt, director of vegetation management for Pacific County. The herbicide used by Nesbitt’s team to kill the spartina is called Polaris. It is an herbicide manufactured by NuFarm, an agricultural chemical company headquartered in Melbourne, Australia. Polaris uses an isopropylamine salt of imazapyr.

Spartina, also known as cordgrass, is considered an aggressive noxious weed by the Washington State Department of Agriculture. Spartina displaces native species, destroys wildlife habitat, interferes with recreational activities and is difficult and expensive to control, according to the agriculture department’s website.

The herbicides used are too diluted to build up in the water and are broken down by sunlight, Nesbitt said. The minimal amount of risk the herbicide poses to the environment doesn’t concern Nesbitt when he considers the immediate risk posed by the spartina to the rest of the bay.

Fritzi Cohen is owner of the Moby Dick Hotel and advocated for the spartina to be left to grow, or controlled through mowing rather than using chemicals. Nesbitt is paid to spray, paid to carry out a policy.

“We’re always fed by the companies that profit from this, that to feed the world we need to use chemicals,” Cohen said. “These things are not good for the health of the planet.”

Nesbitt’s and the federal Environmental Protection Agency’s reassurances that the chemicals are safe when used properly mean little to Cohen. She heard these claims before regarding glyphosate, an herbicide that researchers at the University of Washington have linked to non-Hodgkin lymphoma. She believes Monsanto and other herbicide manufacturers have an economic motive and will not be honest about the possible dangers of these chemicals.

“Some people are going to survive being exposed to a lot of things, and some of them are going to die,” Cohen said.

Must be a balance

To be dead set against using chemicals is bad, Nesbitt said, just as being always in support of using them is bad. The spartina threatened the entire bay and the use of imidacloprid had a minuscule amount of risk when compared to that, he said. As someone who works with many herbicides, he said it is important to respect the dangers they post and put a lot of research into how they interact with the environment.

“I have a vested interest in staying alive,” Nesbitt said.

The robust spartina elimination program began in 2003 when spartina covered more than 8,500 acres of Willapa Bay. Nesbitt remembers airboats launching each morning at 7 a.m. Employees from federal agencies and local departments worked together to find and kill the spartina.

“It was a pretty big spectacle,” Nesbitt said.

In 2009, the Pacific County prosecutor filed an injunction against Cohen to try and force her to let the county spray her spartina with pesticides. By that point, the number of acres covered with spartina in Willapa Bay had dropped from about 8,500 to 85 acres.

Cohen mowed her spartina in an attempt to control the plant spreading, but year after year new patches of spartina would pop up in the bay. Retired Washington State University research scientist Kim Patten told prosecutors much of the spartina sprouting in the bay likely originated from the Moby Dick Hotel property, said Ben Haslam, deputy prosecutor for Pacific County.

The county gave Cohen almost a decade to try to contain the spartina on her property using mowing, Nesbitt said.

The county did not sanction Cohen or require her to pay the county’s attorney fees for fighting the injunction. It sought compliance, not punishment, Haslam said.

Nesbitt said he also never sought to punish Cohen. He prefers talking with people about noxious weeds over ticketing them, he said.

“I really think I did help them,” Nesbitt said. “And I really think they genuinely thought they were trying to do what was right.”

The spartina elimination program is regarded as one of the most successful campaigns against a noxious weed in history, Nesbitt said. Having begun his battle with spartina in 2005 when he worked at the Washington State University Extension office, he said it feels good to start seeing native saltmarsh creep back into the spaces where spartina once grew.

For Cohen, it was a disheartening end.

“I hate it, but the thing is I’m older now and I know the world isn’t a perfect place,” Cohen said.

Every year there is less funding for the spartina program. In 10 years Nesbitt imagines the program will just be him out on the bay, scouting for any last spartina havens.

Editor's note: This story was corrected to reflect that the main ingredient in Polaris is imazapyr.