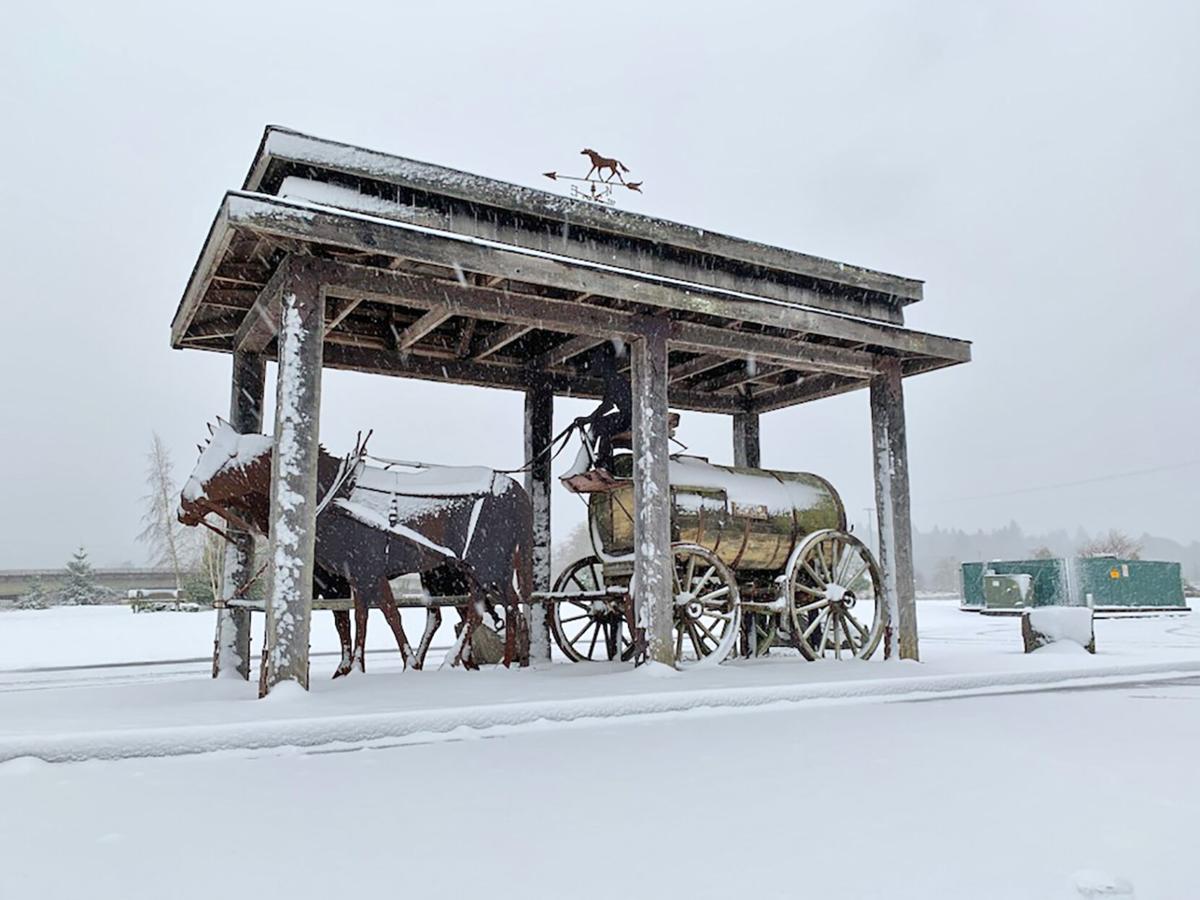 An historical logging display in Raymond was shrouded in snow late last week, as a storm blanketed north county. In south county, the problem was ice. 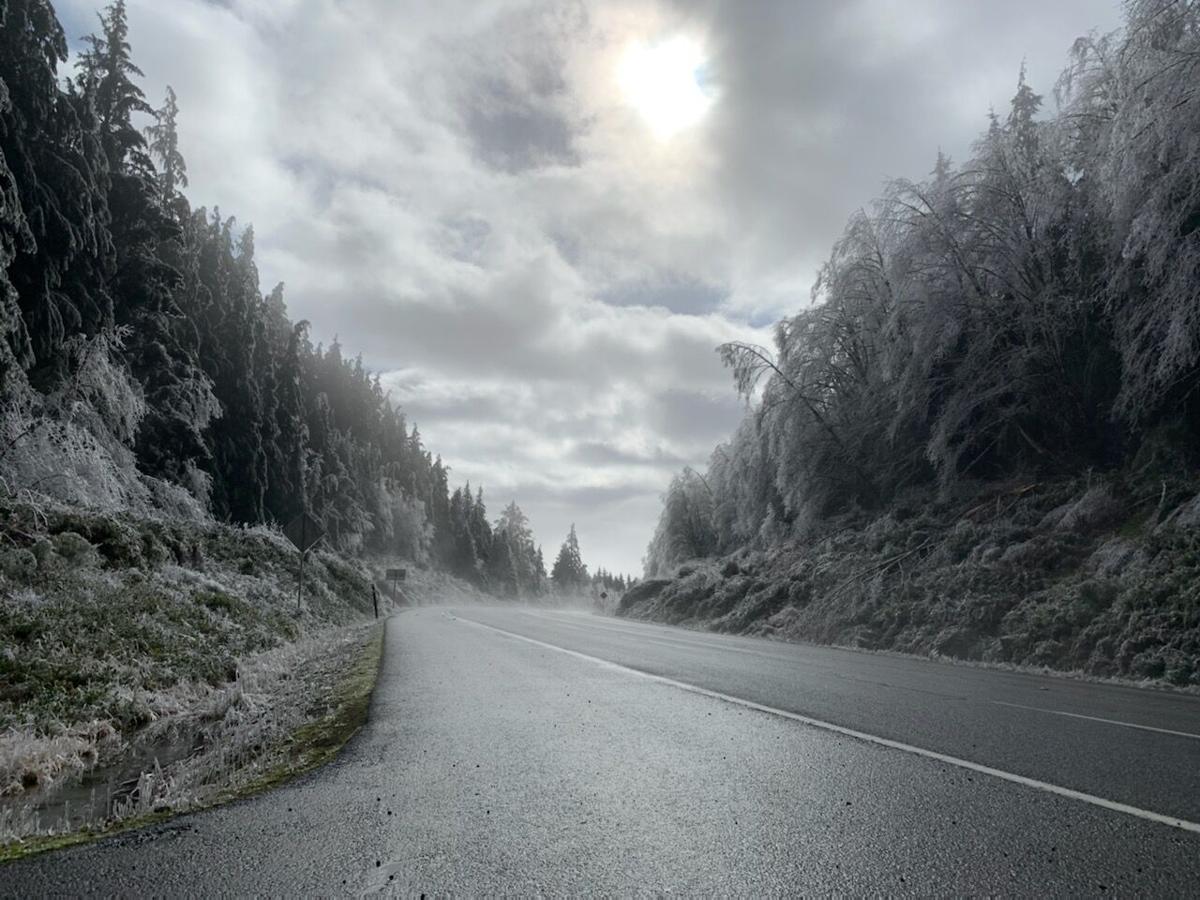 A silvery sheen coated everything near the U.S. Highway 101-State Route 4 intersection after an ice storm.

An historical logging display in Raymond was shrouded in snow late last week, as a storm blanketed north county. In south county, the problem was ice.

A silvery sheen coated everything near the U.S. Highway 101-State Route 4 intersection after an ice storm.

PACIFIC COUNTY — It’s been over two decades since Pacific County saw a winter storm like what unfolded between Feb. 11 and Feb. 13.

Only a few miles separated who received a snowstorm, ice storm, or rain and wind, but one thing is for sure, it was all a bit surreal and led to a wild weekend.

The first snowflakes fell near the Pacific and Lewis County line in the early morning hours on Feb. 11, where around 4 inches of snow fell before the early afternoon at the top of Pluvius. By nightfall, the snow showers shifted 20 miles west and engulfed Raymond and South Bend with flurries.

The Washington State Department of Transportation (DOT) began running plows 24 hours a day and often had two plows working together in sync on State Route 6 to keep up with quickly accumulating snow. They kept every major roadway clear during the entire storm, even though there were moments when it seemed like a losing battle.

Residents in both Raymond and South Bend reported snow accumulations of upwards of 2 inches with locally higher or lesser amounts the following morning of Feb. 12. The more significant snow totals were found to the east from Menlo to the county line, ranging from 6 to 12 inches.

“I think that there are places in Pacific County where we saw things that in terms of the ice storm that [it] was probably the most extreme ice storm that I’ve seen in my tenure at Pacific County Emergency Management Agency,” Director Scott McDougall said. “That’s not something that commonly happens, and I think it was a fairly rare event, and I don’t know to quantify it beyond that.”

He continued, “I think the National Weather Service gave us pretty accurate snow totals. The Long Beach Peninsula didn’t see very much snow at all, and the Willapa Hills areas of the county saw probably 6-8 inches [in most spots.] It’s interesting because I think [University of Washington Meteorologist] Cliff Mass’s totals for the Puget Sound area were pretty much spot on to what he predicted, and I think the Pacific County totals were quite a bit less and in line with what the NWS thought we might get.”

An icy yet beautiful mess

The south region didn’t receive hardly any snowfall, but the story was ice. Overnight Feb. 12 into Feb. 13, the National Weather Service issued a rare Winter Weather Advisory for the potential of freezing rain and ice accumulation between .25 and .50 of an inch for the entire county, practically an Ice Storm Warning without the warning.

North county residents woke up to the ice-covered outdoors with about .25 of an inch of ice. A short commute southward to Naselle, the picturesque scene was entirely different with the woodlands and everything in between covered in at least .50 of an inch of ice. Trees were observed falling due to the extra weight, and branches could be heard snapping all around.

The quickly building ice also led to several power outages in the south county region, including sections of the Long Beach Peninsula where vehicles and the outdoors were noted to have been coated with upwards of .25 of an inch of ice.

However, the worst-hit area was near Chinook eastward towards Wahkiakum County, where dozens of trees plummeted due to the heavy ice.

“My gut tells me this is probably the most extreme ice storm we’ve had in the area since I was a kid,” McDougall said. “We had a lot of ice. I looked outside about 2 a.m. on Feb. 13 and looked at my trees and looked at the power lines in front of my house, and I am guessing we had half an inch of ice accumulation pretty much everywhere.”

He continued, “by morning before I [had] a chance to really go out and look at it [around 6:30 a.m.], all the ice was melting. There was far less ice out there at 6:30 a.m. than there had been at 2 a.m.; it was falling off the trees, and it was already pretty much over with. [However], I can say with great confidence that we saw an usually heavy ice storm, something that we are likely to not see again anytime in the near future, but having said that, I suppose the same thing could happen next week. Not that I expect it.”

The combination of ice on branches and wind made for hectic days and nights for the crew at Pacific County Public Utility District No. 2.

“Yeah, that was crazy,” PUD General Manager Jason Dunsmoor said Feb. 16. “Especially since it hit the whole county. I have never seen the silver thaw hit north county in 29 years. Closest it got was 1996, just north of the county line. Has always just hit Naselle and Chinook along the Columbia.”

Although there was a lot of ice in north county, there was little damage to the electricity infrastructure, he said. However, “Nemah south hit hard. Naselle area hard, but we are mostly underground, so that was good. A lot of overhead services to homes hit. A lot of people saying they want to convert to underground now. The last remaining overhead lines along the Columbia River hit very hard. No broken poles, just wire tore down from the weight of the ice. Crazy how heavy it gets.”

On the peninsula, Dunsmoor said a lot of tree tops broke and fell onto into neighborhood lines, along with the transmission system once. “A lot of little stuff,” he said. “Raymond crew finished up Sunday early and then helped the beach crews.” Power was back on for everyone on Feb. 16 except for a couple overhead services that were tore down. “As of this morning, only one customer left that needs to repair service.”

It wasn’t just power that was affected by the thick ice; in a rare incident, the Astoria-Megler Bridge was closed down entirely after ice chunks the size of cars fell from the bridge onto the roadway. Officials determined it was too dangerous for motorists, and they decided to act before someone got seriously injured. Ice chunks were seen falling for most of the day onto the roadway and into the Columbia River.

On top of the outages, the Pacific County Sheriff’s Office reported five collisions before sundown on Feb. 12 alone, including a driver who rolled his truck into the Willapa River outside of Raymond on State Route 105 due to losing control of his truck in slushy conditions. He walked away from the incident uninjured but was sopping wet after landing several feet deep in the water. It took several hours for the truck to be removed from the river.

Remnants of the rare winter storm were still visible on Feb. 15, with spotty snow accumulations visible from Raymond through the entire 20-mile journey to the top of Pluvius. There, upwards of 10 inches of snowfall remained, with some portions resting 12 inches or more.

Even with the intense snowfall from days before, the entire area remained as if nothing had changed except for the bare roadway that DOT worked relentlessly to keep clear for traveling motorists. The quiet and relaxing wintry environment remained mostly undisturbed except for the footprints of a few trail goers and homeowners who worked to clear their driveways.