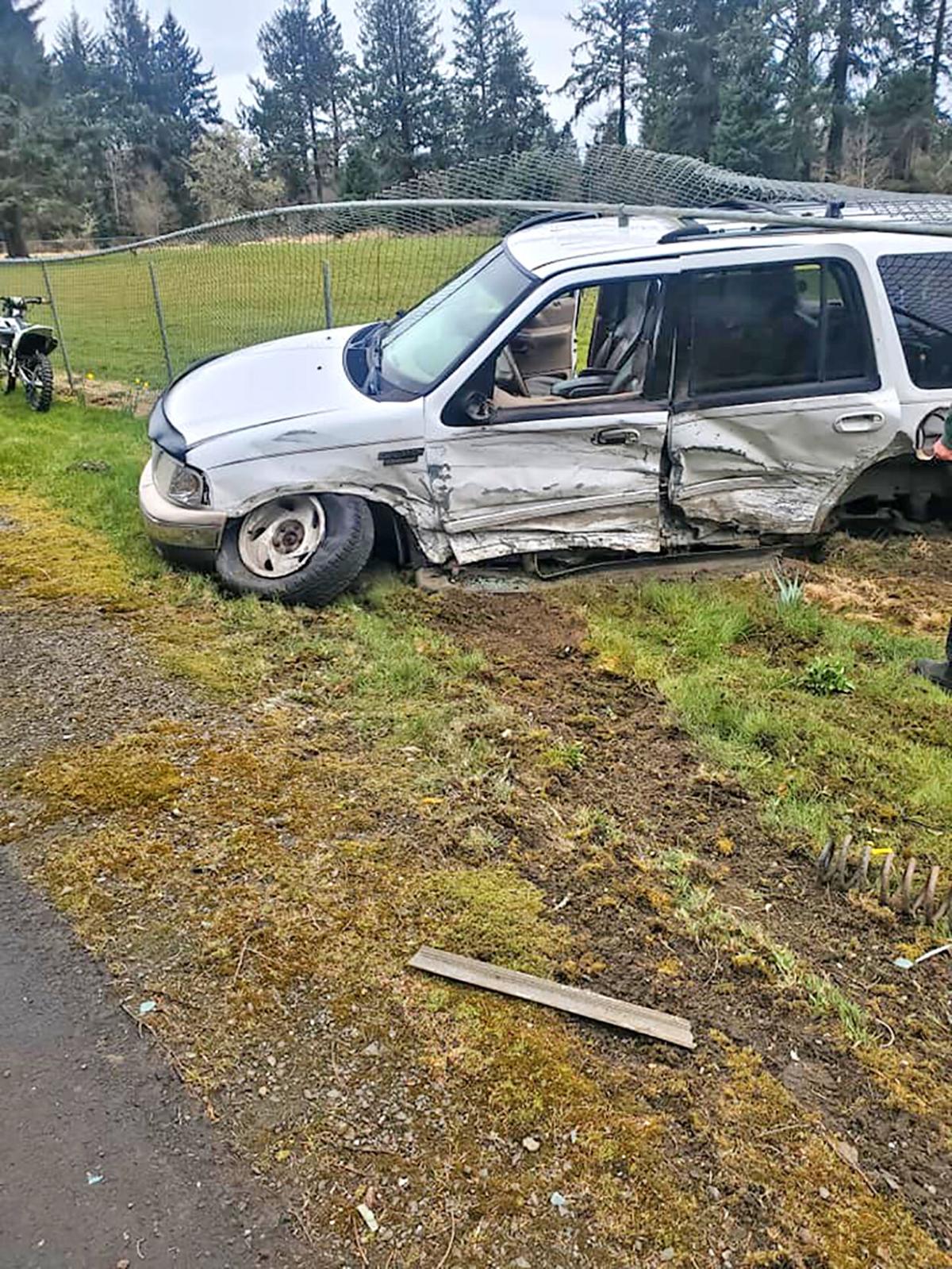 Quick thinking turned what could have been a deadly head-on collision into a glancing blow after the driver of an oncoming vehicle allegedly deliberately steered into the wrong lane. 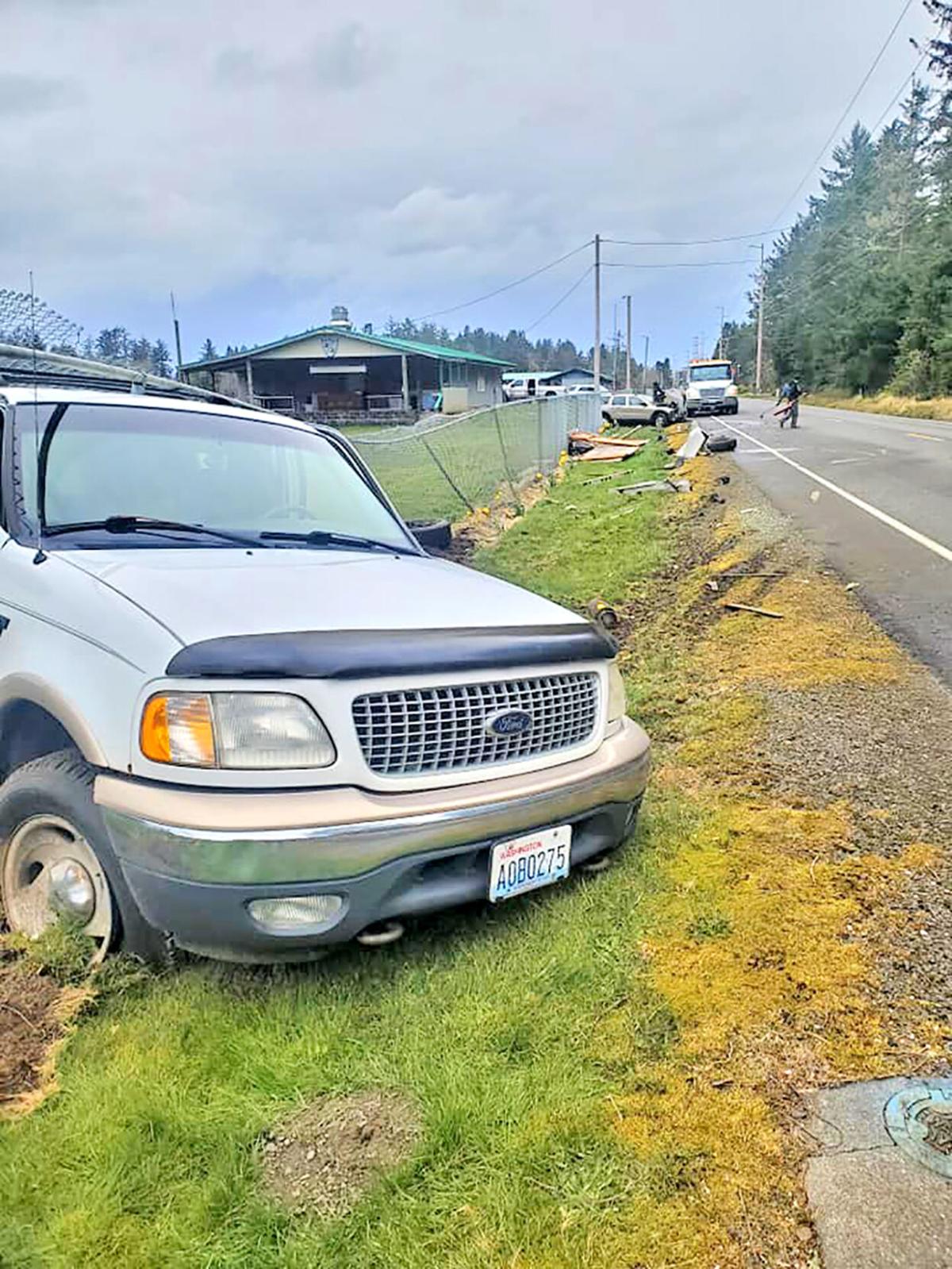 A Ford Expedition driven by Jason Coffin came to rest in the fense surrounding Wilson Field about a quarter mile south of the Sandridge-Bay Avenue intersention.

Quick thinking turned what could have been a deadly head-on collision into a glancing blow after the driver of an oncoming vehicle allegedly deliberately steered into the wrong lane.

A Ford Expedition driven by Jason Coffin came to rest in the fense surrounding Wilson Field about a quarter mile south of the Sandridge-Bay Avenue intersention.

NAHCOTTA — Three people are lucky to be alive after a March 19 collision in the 25000 block of Sandridge Road. In the aftermath, a Long Beach man is being held in the Pacific County Jail in lieu of $500,000 bail for allegedly steering into the oncoming vehicle on purpose.

A young driver’s quick thinking is believed to have kept the collision from becoming a fatality. His mother, who was his passenger, has nothing but praise for his heroism during the ordeal.

45 yards of crushed metal and skidmarks

Pacific County Fire District No. 1 was the first agency on scene at around 12:55 p.m. and discovered two vehicles with severe damage next to the Beach Barons’ Wilson Field. Pacific County Sheriff’s Office Deputy Dustin Eaton arrived a short time later and began investigating.

According to Eaton’s report, a vehicle traveling northbound driven by Jay Jensen, 30, of Long Beach, on Sandridge Road swerved into the opposite lane where Sabrina Coffin, 52 of Ocean Park, and a minor male driver were traveling. The minor attempted to get out of the way of the oncoming vehicle, but wasn’t able to entirely avoid a collision.

‘He saved our lives,’ says mom

Before the collision, Sabrina and her 15-year-old son, Jason, pulled off the roadway so he could text a friend. He and his mom were heading to Chinook in their late-90s Ford Expedition and were towing his dirt bike on a trailer so he could go riding with a friend. Minutes after they reentered the roadway, they were struck by Jensen’s vehicle.

They both managed to walk away from the collision with only minor bumps and bruises. Jason “swerved hard right” at the last second to avoid a direct head-on hit from Jensen’s Volvo station wagon, Sabrina said.

“I looked up, and there was somebody coming towards us in our lane, and at that point, he was very much in our lane to where I was concerned he was sleeping or something,” she said. “It was obvious he was not going away. I gasped, and my son took a hard right, and I mean just cranked the wheel. Then there was the sound of metal when the guy hit us, and then we ended up sweeping to the side, and the trailer was pulverized.”

Both vehicles came to a rest off of the southbound lane with the Expedition crushed on the drivers’ side and wrapped in chain link fencing. Almost 50 yards away, Jensen’s vehicle came to a rest partially in a ditch. Jason’s last-second action was able to ricochet Jensen’s car at an angle, avoiding a direct head-on impact, thus diverting a lot of the energy from the collision away from him and his mom.

“We couldn’t get out, and we had to crawl out the window on the driver’s side and I still don’t know how I did that. The adrenaline was going, and there was just wreckage everywhere, and there was a woman who saw the whole thing. She pulled off of the side of the road and asked if we needed any help,” Sabrina said.

After the collision, Coffin said Jensen walked up to Sabrina and Jason, apologized for the collision, and checked to see if they were OK, even taking a second to hug Jason.

“I’ve told everybody, and I am so proud of him for the quick decision and the way he handled the situation,” Sabrina said of Jason. “He’s the one who called 911. I mean, it’s amazing, and he is just like his dad. He is just a really quick thinker and is quick-witted, and he’s just an amazing kid.”

The Washington State Patrol arrived to assist units on scene and waited for a tow company to arrive and remove the vehicles so that Eaton could respond to OBH and continue his investigation. According to his report, while Eaton responded to OBH, he was advised by dispatch that a disorderly incident was occurring at the hospital.

‘I arrived on scene and identified the disorderly subject as Jensen,” Eaton stated. “When I arrived, Jensen was in the middle of being evaluated, so I didn’t have a chance to speak with him. I spoke [to a nurse] who was in Jensen’s ER room. [The nurse] stated that [they] called 911 for Jensen acting disorderly. [They] stated that Jensen had told [them] that he purposely went into the other lane because he wanted to kill himself.”

After concluding his investigation, Eaton charged Jensen with first-degree assault, and he was booked into the Pacific County Jail after being cleared by OBH. He is currently being held on $500,000 for the incident.

“In the area where the accident occurred, it [has a posted speed of] 45 mph,” Eaton stated. “A reasonable person would believe that two vehicles traveling approximately 45 mph and the force of hitting head on would produce great bodily harm or death.”

Sabrina learned of the cause of the collision later in the evening after Eaton called to inform her of what he had found out. The collision’s reasoning has left her shaken up that someone would have such disregard for others’ lives.

“It’s a miracle all around that we are okay,” she said. “The whole thing bothers me that he did it intentionally. That’s the biggest challenge of all of it, and it makes me feel a sinking feeling, ultimately.”