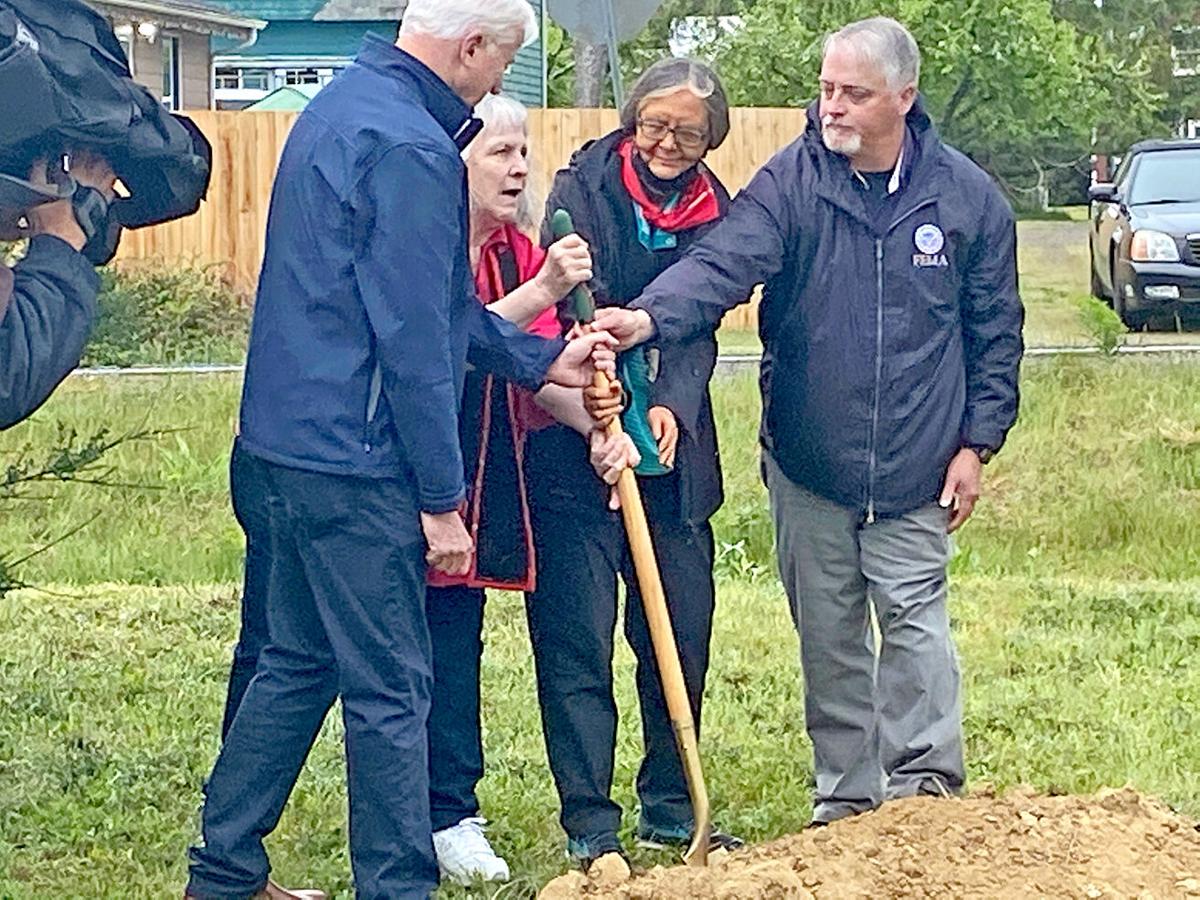 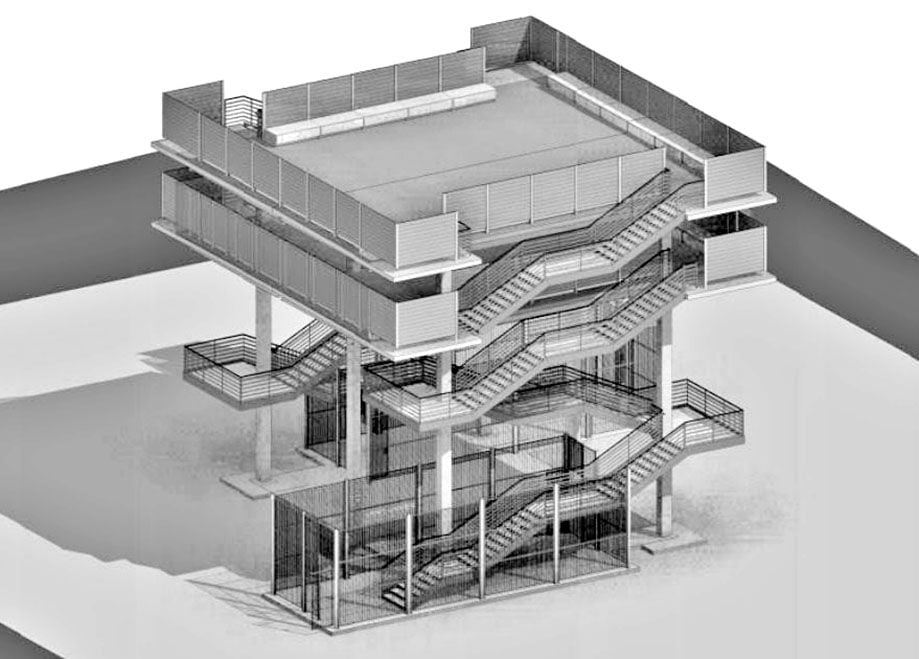 The finished design of a tsunami evacuation tower in the north Pacific County shoreline community of Tokeland is shown in this architectural rendering. 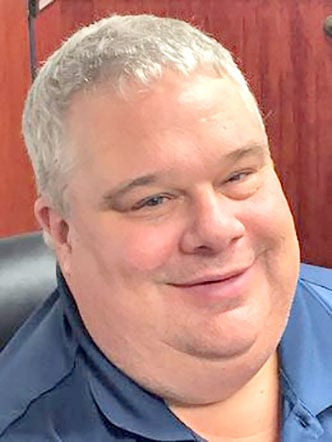 TOKELAND — The Shoalwater Bay Tribe broke ground on a stand-alone tsunami evacuation tower May 17. The first of its kind in the U.S., county officials hope it will lead to more.

“Lee approached [the University of Washington] and their tsunami research team,” Ufkin said. “[Together] they got enough information over time to put an intelligent request together to obtain funding. Then they went to the hazard mitigation folks, Maximillian Dixon and his group, and in a month’s time, they were able to take all that information and put it together into a grant.”

The tribe received an initial $2.2 million grant for the project from the Federal Emergency Management Agency (FEMA), with the tribe providing just over $1 million.

The tribe originally expected to break ground in 2020. But due to covid-19 pandemic limitations and subsequent increases in steel costs, the project needed to be re-bid.

‘We were able to hit the reset switch,” Ufkin said. “We put it out to bid again, and it landed on Rognlin’s Inc., and they broke ground on May 16, the actual day of the groundbreaking ceremony. Usually, there’s boots on the ground prior to that.”

Once constructed, the tower will be about 50 feet tall with a specialized footer system that will go another 50 feet into the ground. The tower will have multiple 40x50-foot decks capable of sheltering a total of at least 382 people.

“You can easily double that,” Ufkin said. “From an engineering standpoint, it could easily hold maybe 800 people without the structure being remotely put at risk. There’s approximately 300 people in Tokeland. Now, if you think of a busy summer day and there’s tourists around, you know you might just double that number which it can still hold.”

Residents, tourists and any passersby in the heart of Tokeland will notice the placement was selected to benefit all community residents, not just tribal members.

“The tribe intentionally chose the location for the tower to share it with the community in a centrally located spot because it’s at the southern limit of the reservation,” Ufkin said. “They put it there so that the Tokeland residents at large could share it with them.”

After the risks of tsunamis started to become widely known starting in the 1990s, tribal officials spent around 18 years working toward providing a vertical evacuation option. Ufkin notes that it’s living proof that the tribe won’t give up easily, and, seeing a chance to save lives of both tribal and non-tribal members, pursued it until it came to fruition.

“This tribe has historically has put itself in a position to always be a good neighbor to the folks around them, which in itself is impressive because if you go back to as early as the 1980s, there wasn’t always that kind of relationship among tribal groups and those who are non-tribal living around them,” Ufkin said. “The tribe has always been of that mindset to be a good neighbor, and I feel very fortunate to be a part of that.”

First, but hopefully not the last

Only one other tsunami evacuation structure stands in North America, and it’s about a 20-minute drive north of Tokeland in Westport. Ocosta School District taxpayers funded it as part of a new elementary school gym.

In contrast, the one in Tokeland will be the first stand-alone tsunami evacuation tower built in North America.

Pacific County Emergency Management Agency Director Scott McDougall hopes it will lead to more in the county and that the state Legislature sees its benefits. The Long Beach Peninsula is estimated to need up to 18 to 23 evacuation towers for all residents and visitors to find refuge from a tsunami during the “worst reasonable-case scenario, the 2,500-year event” used by the international building code, McDougall said. “The timing between the time of the earthquake and arrival of the first wave [on the peninsula] is somewhere in the range 15-25 minutes.”

Currently, only a few sections of the peninsula are expected to be high enough to escape flooding during such a CSZ tsunami, according to a simulation model released by the Washington State Department of Natural Resources in August 2020. Higher elevations of Ilwaco and inland sections of Ocean Park and the peninsula’s northern end east of Surfside are shown to remain above tsunami inundation.

‘Balance the risk and the costs’

Pacific County’s most significant hurdle in constructing evacuation towers is funding so many. At an overall cost per tower of $2 million to $4 million, a minimum of 18 towers could come to $36 million to $72 million. FEMA grants currently require a 25% local match, potentially totaling up to about $20 million for the entire evacuation network.

“We need to find a way to balance the risk and the costs and find a way to make these things go forward with the understanding that we aren’t only protecting the 22,000 souls that live here now but also the souls that would be here on a tourist weekend,” McDougall said.

McDougall and county officials have been looking at funding towers with public and private cooperation since FEMA funding is currently an unlikely solution. One idea is to mirror what the Ocosta School District did, since multipurpose structures aren’t now eligible for FEMA grants.

“I’m thrilled if we could get a [evacuation tower] built, but if we can find a way to get people to build these towers and do it as a value-added thing to construction that is already taking place, I think there’s a real benefit to that,” McDougall said. “I’m open, and I will work with the community however they see fit to try and make these things come together, but I can’t spearhead these efforts. I can’t do all this on my own because it would potentially take all my time.”

One possible option is providing tax write-offs for construction proponents willing to work with the county on building evacuation structures within new construction.

Until the county, state and federal governments find a solution for the problem, peninsula residents are encouraged to familiarize themselves with tsunami evacuation maps on the PCEMA website and periodically monitor for changes: www.pacificcountysheriff.com/emergency-management.html. The agency also provides timely information on its Facebook page, www.facebook.com/PCEMA.

“Every step inland is a step closer to safety,” McDougall said.