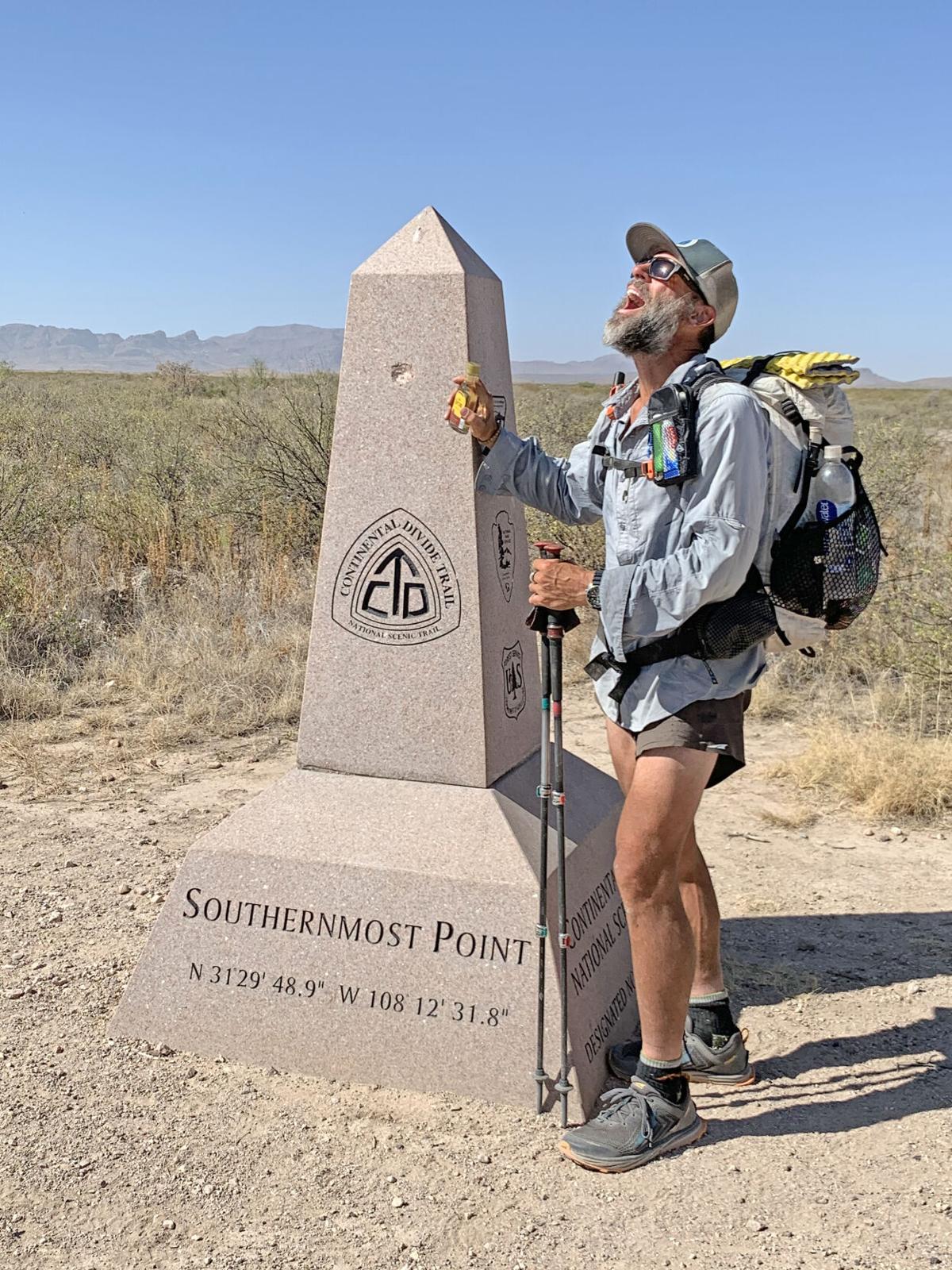 Gabriel West celebrates at the terminus of the Continental Divide Trail on the Mexican border earlier this year on completion of what he called “a brutally tough hot and dry” through-hike which meant he had accomplished the Triple Crown. 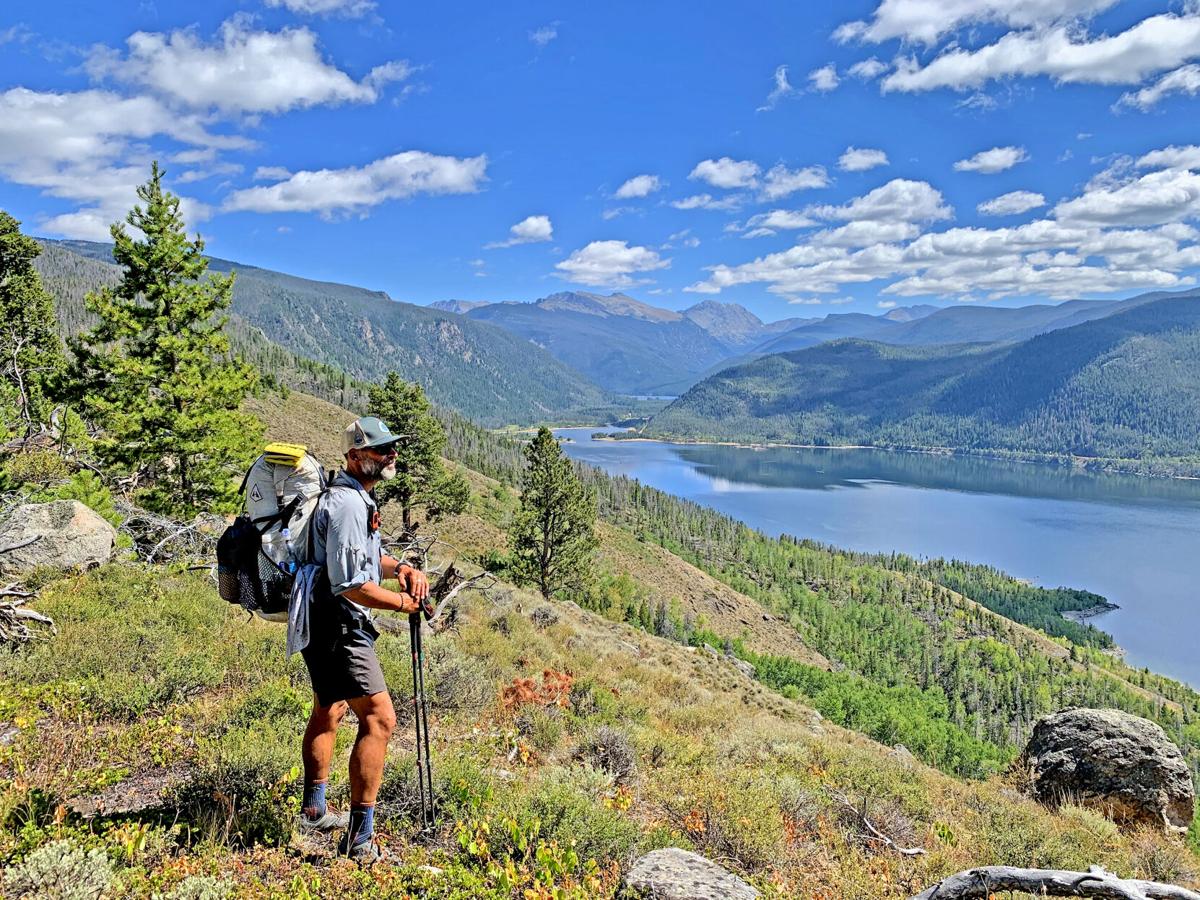 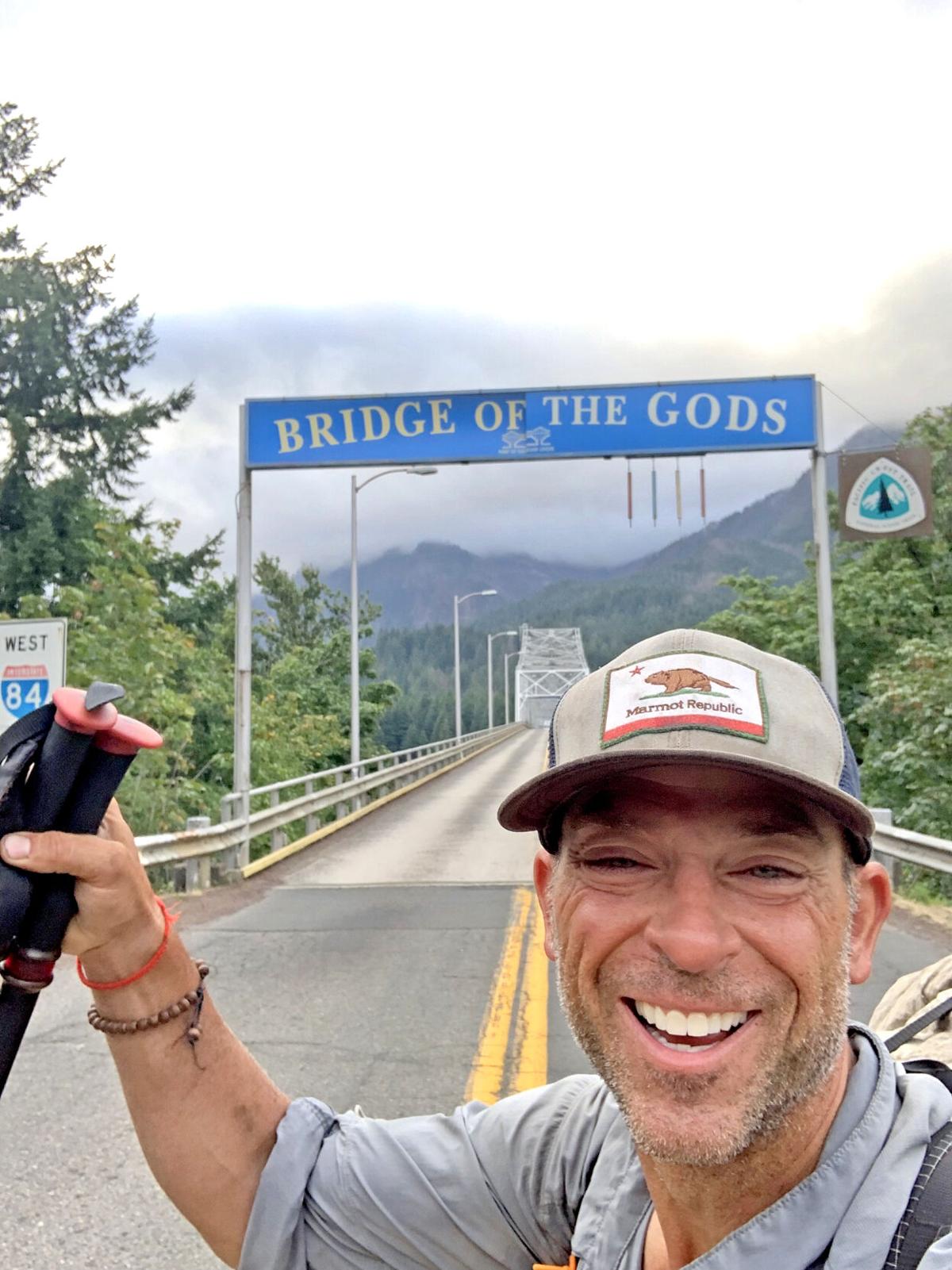 During last year’s walk along the Pacific Crest Trail, Gabriel West pauses for a souvenir photo in front of the Bridge of the Gods at Cascade Locks that marks the border between the Oregon and Washington sections of the trail. 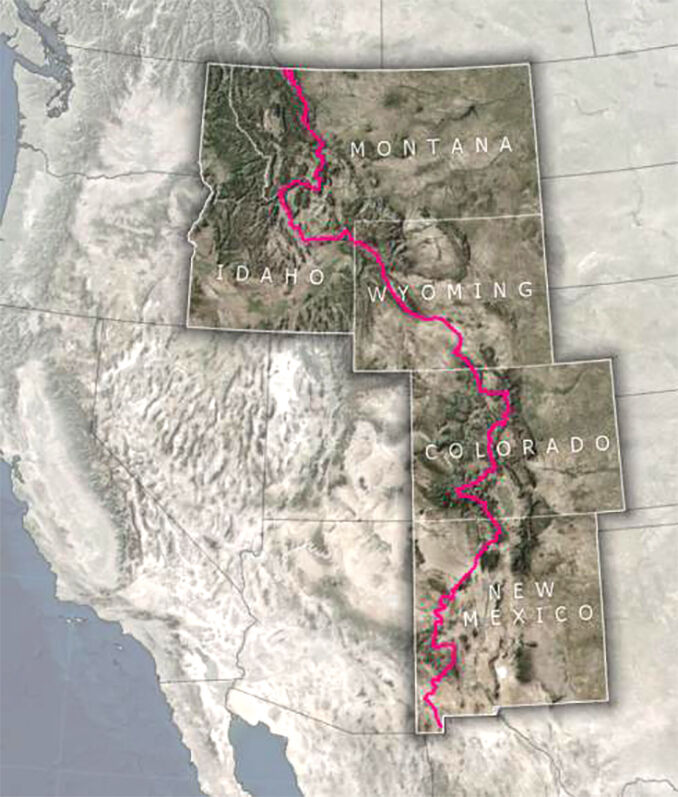 The Continental Divide Trail is a challenging route along the backbone of five western states.

When it comes to coping with covid-lockdown inspired blues, Gabriel West has a solution.

Get out and walk.

West takes his own advice to extremes, having just completed the Continental Divide Trail, the third in the “triple crown” of the most testing hikes in the United States.

Hear Gabriel West talk about the cathartic value of the hike after the death of his mother:

But his belief in the therapeutic value of unplugging from modern stresses and getting out into nature holds true for less intrepid souls.

“We need to be getting people back walking and hiking, in any fashion,” said the 50-year-old. “There are so many people who could benefit from this — it’s a healthy culture, being outside.”

West is the son of Doug West of Long Beach, a retired professor originally from Chehalis who earned his Ph.D. from Washington State University. Doug West’s career as a widely published university chemistry teacher took the family to several locations, including New Jersey and Michigan, plus periods in England and Spain, as well as Illinois State University, where he was department chairman for 11 years. Before retirement, he conducted research at the University of Washington.

Although his home is Austin, Texas, Gabriel spends significant time on the Peninsula bonding with his father. His job as a self-employed trader in commodities and equities means he can work anywhere; he keeps odd hours to monitor international markets.

‘If you know why you are on the trail, you will never be disappointed. It’s the journey — not the destination.’

He recalls always keeping fit because of his passion for soccer, which began at age 5 and included playing at Illinois State and elsewhere, including when he lived in Europe.

Equipped with a fit physique, and having enjoyed camping trips throughout his life, he was positioned for a challenge when his mother died four years ago. Gayl West had been a popular figure on the Long Beach Peninsula since she and Doug retired to Ocean Park in 2002. She was an enthusiastic member of the Shoalwater Birders and the Peninsula Garden Club. As master bridge players, she and Doug had an active social set playing at clubs on the Peninsula and in Seaside.

Gabriel, the younger of their two sons, was devastated by the loss of his mother. A friend suggested tackling the Appalachian Trail, which runs from Georgia’s Springer Mountain to Baxter State Park in Maine — a distance of 2,190 miles. Such trips inevitably allow time to think, sometimes releasing positive endorphins to create what’s known as a runner’s “high.”

“The first 500 miles was cathartic and heavy and I was ‘in my head’ a lot, but after that I had worked through my grief and felt ‘high’ the rest of the way to Maine,” West said.

The route took about three and a half months and West recalls with amusement that it was reportedly the wettest on record. He slept in a hammock for most nights, and said that helped him stay dry. He didn’t pack a heavy stove and instead ate nuts and mashed potato.

When told about the challenge of walking that far, he first researched what he was getting into. He trimmed his pack weight to just 12 pounds before adding food and water, and never carried more than 30 pounds on his back.

The trip — called “through walking” — inspired him to a second adventure the following year. The Pacific Crest Trail took him about four months from the Mexican border in California to Canada, where the trail ends at Manning Provincial Park in British Columbia.

In the serious walking community, Oregon is considered a “two-week challenge.” He was especially proud to have completed that portion in just 11 days. He enjoyed meeting Dutch and French hikers who accompanied him for large parts of the route (as did mosquitoes, of which he speaks less fondly). A side trip included a climb to the summit of Mount Whitney (14,505 feet); he would learn afterward that last year’s season was the snowiest for years.

Meeting people on his routes who help kindred spirits — known as “trail angels” — was rewarding, he said. “It’s a happy, healthy group.” Many give the walkers nicknames so they can distinguish each other; West’s moniker is “pay-it-forward.”

His latest three-month trek, which has just concluded, was going north-south from the Canadian border at Glacier National Park to Crazy Cook Monument at the boot heel of New Mexico. He is still checking his route notes to determine the exact length, but estimates it at 2,760 miles, perhaps longer because of a side trip or two.

This time, he slept in a tent for many more nights, although not all. “There is just something mentally therapeutic about laying out under the stars,” he said, recalling troubled veterans he encountered on his Appalachian trip who had been encouraged to walk as a healthy alternative to medication.

He noted, though, that the significant exertion and commitment is not for everyone. “A lot of people fall back after being on the trail. If you know why you are on the trail, you will never be disappointed. It’s the journey — not the destination, and you spend a lot of time by yourself.”

The success has not surprised his father, Doug, who speaks with pride about his son’s accomplishments. “He’s been one to see the world and he’s in good shape. He runs on the beach and does 8 or 9 miles when training,” he said. “Actually, he’s never been out of shape.”

For Gabriel West, this year has featured the added pleasure of learning that he has completed the “triple crown” of American through hikes. A friend impressed on him that the number of walkers who can boast that accomplishment is fewer than 1,000.

And next year? West is planning a 700-mile hike in the rugged Canadian Rockies.