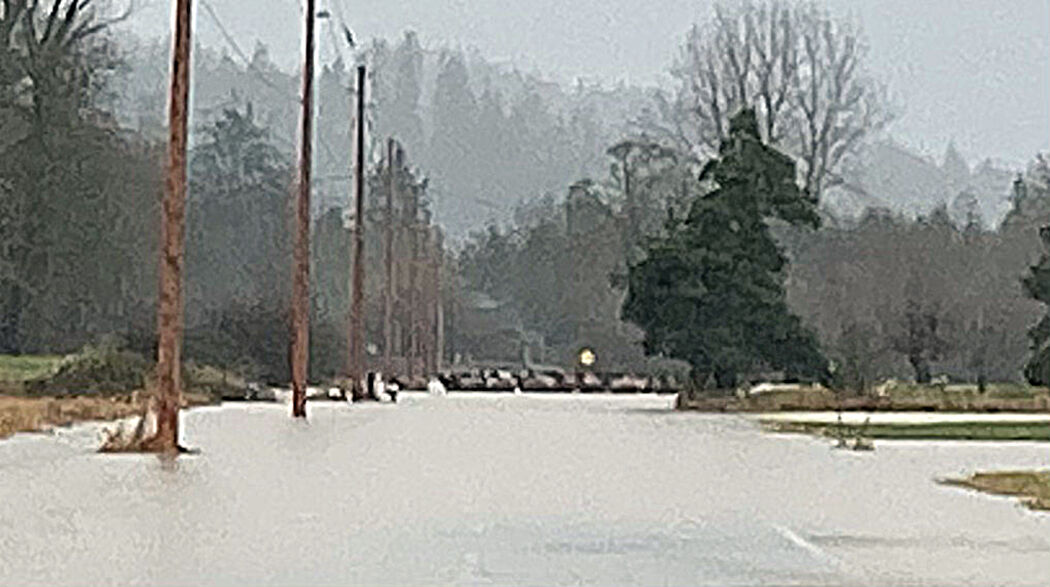 A herd of elk forded a flooded rural road in north Pacific County.

Heckard Road in north county was covered by floodwater early this week. 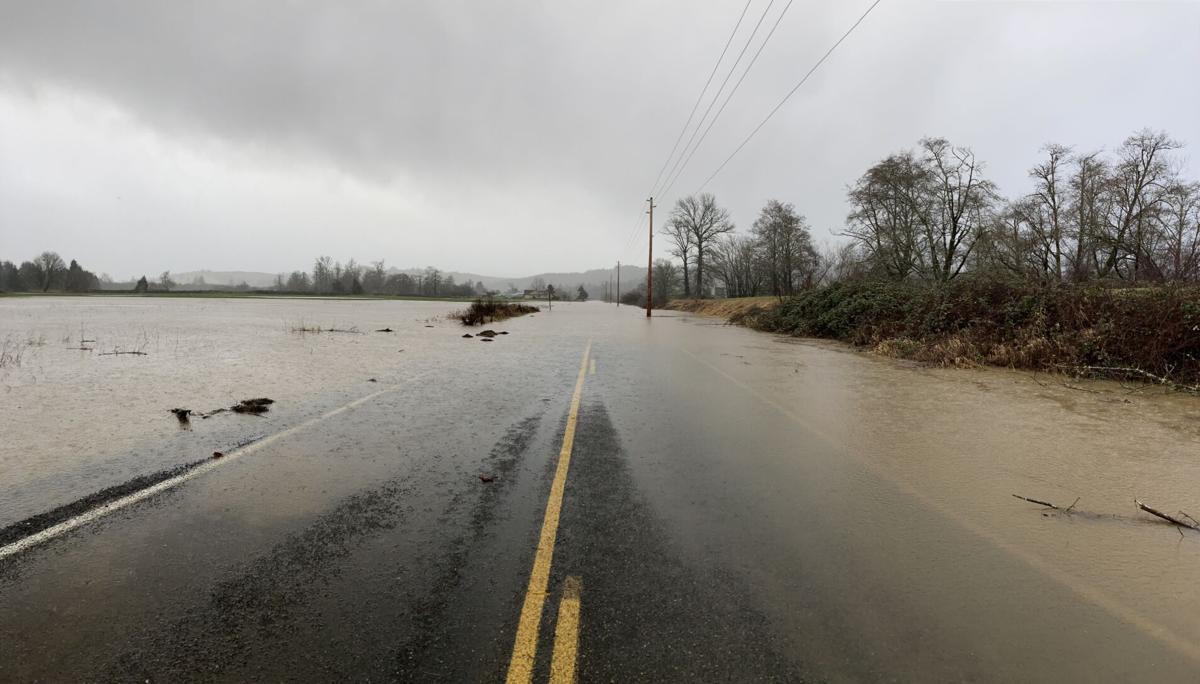 A herd of elk forded a flooded rural road in north Pacific County.

Heckard Road in north county was covered by floodwater early this week.

PACIFIC COUNTY — Over the weekend, rainfall approaching half a foot in some places pushed the Willapa River over its minor flood stage of 21 feet on Jan. 3, cresting at 21.06 feet around 7:45 a.m.

The hardest-hit Pacific County area has been the area of Old Willapa and Heckard Road outside Raymond, which has been covered with floodwater. In western Wahkiakum County, flood-prone Grays River came close to its 15-foot major flood stage, causing local road closures.

With another atmospheric river expected to impact Western Washington on Jan. 5 after the Chinook Observer’s press deadline, over-saturated soils are at risk of causing landslides. A major slide just east of Astoria early Monday morning damaged a passing pickup, sending the driver to the hospital with cuts and bruises, and closed Oregon Highway 30 for hours.

Lots and lots of rain

“In the last 24 hours, about 4 inches of rain [has fallen],” Pacific County Emergency Management Agency Director Scott McDougall said. “The rain gauge in Frances is currently offline, so it’s more difficult for me to access the period in the last 24 hours. Based on historical events, we generally need about 6 inches in 24 hours to produce the river levels we saw with this event.”

An additional inch or so of rain was forecast to fall on low-lying areas of the county on Tuesday. Higher elevations of the Willapa Hills could get twice as much.

The Northwest River Forecasting Center sent out a bulletin on Jan. 2 that the Willapa River would likely be near its minor flood stage with a crest of 20 feet around 1 a.m. The rain, however, hung on longer than expected and pushed the river even higher.

“The river continued to rise, and at 3:49 a.m. this morning (Jan. 3), the National Weather Service put out a bulletin that said that the river was at 21 feet,” McDougall said. “Their forecast at that point [predicted] that it would go to 21.2 feet.”

Pastures in the area of Old Willapa along Camp One Road have been the most impacted with flooding, including the area near Woohoo Winery. The only road that has been inaccessible is Heckard Road between Camp One Road and State Route 6. It was covered by several feet of water that left a few homeowners stranded but didn’t deter a herd of elk that traversed the murky water.

“To the best of my knowledge, I don’t believe there has been any damage done,” McDougall said. “It’s mostly just been water covering property, and that’s traditionally what happens when the Willapa hits its minor floss stage. We really start running into problems at about 24 feet.”

The sudden rise to flood level took many by surprise, including McDougall, who didn’t expect the Willapa River to reach flood stage. It wasn’t until the early morning hours on Jan. 3 that the picture became clearer about what was actually happening.

“I was on top of it until about midnight (Jan. 3) and by 4 a.m. things had changed fairly dramatically,” McDougall said. “I ended up putting information out about the Willapa between 3:45 a.m. and 4 a.m. I put it out as fast as I get it and it’s hard to track when the rain stays longer than it should.”

One family that lives along Mill Creek Road less than a mile from the U.S. Geological Survey flood gauge at the juncture of Camp One Road and Mill Creek Roads was taken aback by the unexpected flooding.

“Last night it wasn’t this high,” Stacy Lorton said. “We looked out this morning and saw this and we were surprised about how high it is.” Her husband and son also ventured down to the roadway to peak at the swelling river bank. The same portion of Mill Creek has washed out in the past due to flooding.

Close call on the Naselle

The recent rainfall has been the first real test of the new flood stage of 15 feet on the Naselle River, which reached a crest of 14.39 feet around 7:30 a.m. on Jan. 2. At the peak, it came within 6 inches of reaching the minor flood stage.

“It ended up cresting below flood stage and there were no reports of anybody having issues,” McDougall said. “I think we must have gotten the flood stage just about right. The one thing that we will have to pay attention to is down in the area in Naselle down by Okie’s [because] some of those roads are almost below the level of the river.”

McDougall continued, “they tend to flood on high tides like we see up in Raymond so it will be interesting to see if you have that much water coming through at the same time as high tide. The river crested pretty much at low tide for this event.”

He also kept a close eye on the Grays River in Wahkiakum County, because he’s found that it’s a great indicator of what to expect locally in Pacific County. The Grays watershed in the Willapa Hills extends well into Pacific County.

“If we start to see flooding there, you start to wonder about stuff in your area too,” McDougall said. “It will typically flood two or three times a year.”