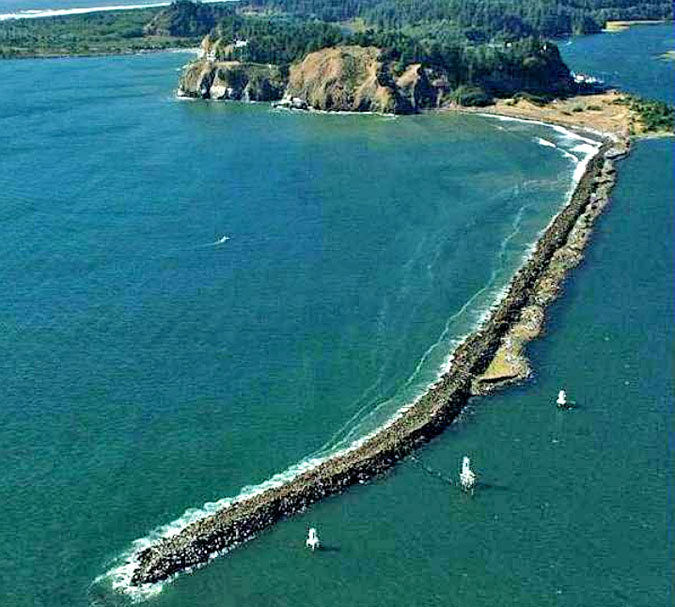 Jetty A extends south from Cape Disappointment. Approximately 160 million pounds of rock will be added to it starting this summer. 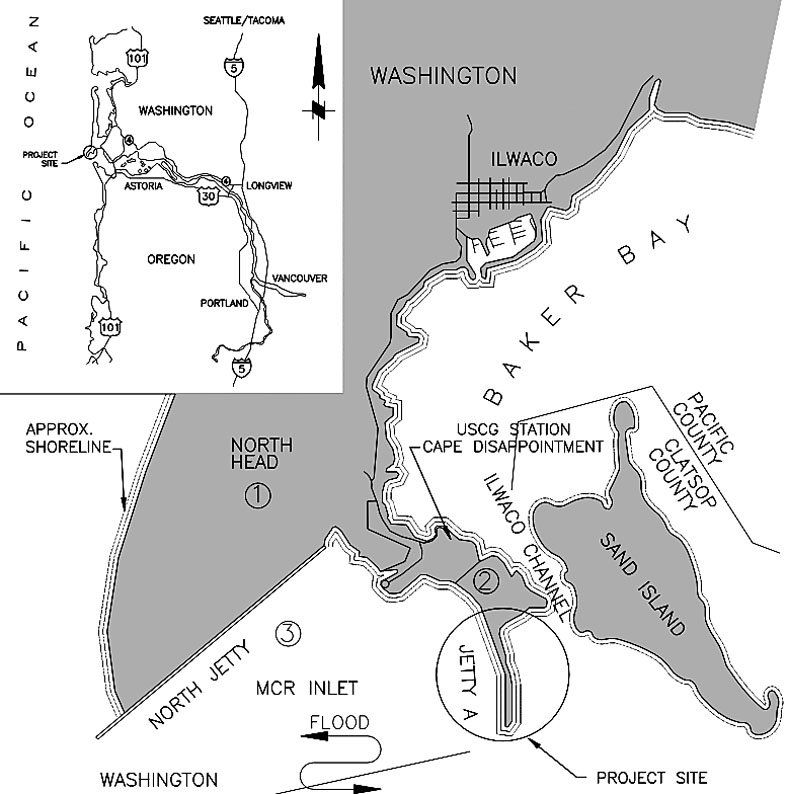 Jetty A (circled on this map) will be substantially reconstructed between this May and 2017. Located south of U.S. Coast Guard Station Cape Disappointment, it is seldom visited by local residents but plays an important role in protecting the Columbia River's navigation corridor.

Jetty A extends south from Cape Disappointment. Approximately 160 million pounds of rock will be added to it starting this summer.

Jetty A (circled on this map) will be substantially reconstructed between this May and 2017. Located south of U.S. Coast Guard Station Cape Disappointment, it is seldom visited by local residents but plays an important role in protecting the Columbia River's navigation corridor.

ILWACO — The U.S. Army Corps of Engineers has yet to officially award a contract, but says it expects to begin work on the smallest of the three jetties at the mouth of the Columbia River, Jetty A, next month.

At an Ilwaco Merchants meeting April 13, USACE Project Manager Jerry Otto assured community members that the Corps plans to meet with the broader community and the Coast Guard to “work through any concerns the community has about construction, before construction.”

Though the Corps hasn’t been able to award a contract yet for Jetty A work — it is waiting for a final decision on a protest filed by a contractor who had bid for the project — Otto told the merchants it is likely that much of the large stone needed for Jetty A will be delivered to the site by barge rather than sent by truck.

For critical repair work on North Jetty last year, hundreds of long, flatbed trucks carrying massive jetty stones and dump trucks loaded with material traveled down Pacific County’s highways and through Ilwaco. These trucks, the loads they were hauling and the sheer number of them passing through town and Cape Disappointment State Park, caused some concerns among residents and Washington State Department of Transportation officials.

Not all contractors have the capability to barge stone, Otto said, but “our preference is water.” For one, added USACE Administrative Contracting Officer Violet Albright, it’s much more cost-effective, especially since, with the quantity of stone needed, a contractor will have to draw on multiple quarries, some of them far away by land.

And Jetty A, originally constructed to direct river and tidal currents away from North Jetty’s foundation, is going to require a lot of stone, approximately 80,000 tons. Each individual jetty stone can weigh up to 30 tons.

A small number of barges could easily haul that much stone. But if the Corps’ contractor can’t barge the stone, Albright told the Ilwaco Merchants, “We’re going to need to talk, because it’s going to be hundreds and hundreds of trucks.”

The arrival of these stones, by whichever method, is still months away.

What the Corps expects to begin in May is primarily site preparation, said Otto. The community can expect to see some dump trucks and excavators travel through the area as well.

Critical repairs on North Jetty last year limited access to Waikiki Beach and Benson Beach in Cape Disappointment State Park, and required occasional road and parking lot closures. But Jetty A is less visible; it begins in the U.S. Coast Guard station in the state park and has no public access.

Site preparation and staging of materials expected to begin next month mark the beginning of major rehabilitation work on the entire three-jetty system at the mouth of the river, a project the Corps expects will last through 2023.

According to estimates provided by the Corps in its 2012 “Major Rehabilitation Evaluation Report,” the total cost of the work on all three jetties is estimated at $257.2 million. Work on Jetty A is expected to cost close to $30.5 million.

The jetty system as a whole is crucial to local and international trade, the Corps says, providing ships safe entry into the Columbia River navigation channel. Thousands of cargo vessels and fishing boats cross the famously dangerous Columbia River Bar ever year. An independent review of the jetty system, however, stated that all three jetties are in desperate need of repair.