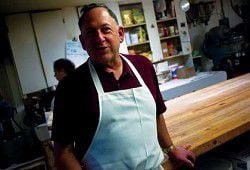 After operating his business in downtown Long Beach for over 30 years, Bob Andrew recently moved into the Long Beach city limits in order to serve in public office. Andrew ran unopposed in the recent Long Beach mayoral election.<I><BR>DAMIAN MULINIX photo</I> 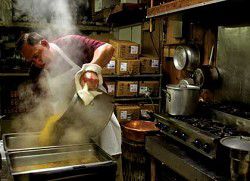 <I>DAMIAN MULINIX photo</I><BR>As he has done since buying the business in 1973, Bob Andrew spends a good deal of his day working at various tasks, such as making soups or baking, at Cottage Bakery in downtown Long Beach.

After operating his business in downtown Long Beach for over 30 years, Bob Andrew recently moved into the Long Beach city limits in order to serve in public office. Andrew ran unopposed in the recent Long Beach mayoral election.<I><BR>DAMIAN MULINIX photo</I>

<I>DAMIAN MULINIX photo</I><BR>As he has done since buying the business in 1973, Bob Andrew spends a good deal of his day working at various tasks, such as making soups or baking, at Cottage Bakery in downtown Long Beach.

LONG BEACH - Growing up in the Vancouver and Battle Ground areas, Long Beach Mayor-elect Bob Andrew says he has fond memories of taking trips to the Ocean Park family cabin and spending lazy days around and about the Peninsula.

Throughout his teenage years, he worked at a plywood mill and also with his dad, a longshoreman. While attending Evergreen High School in Vancouver, he enjoyed companionship with his high school sweetheart, whom most now know as his wife, Judi. Following their high school graduation in 1968, Andrew joined the army reserves, where he worked for a supply company delivering vehicles for headquarters. He also was once part of a partnership for Sputnik Donuts.

After finishing his obligations with the service in 1974, he and his wife moved to Ocean Park and purchased a small bakery in downtown Long Beach in late September. Eventually, they purchased the retail space north of them, at the time it served as a sweets store called Candyland.

After trying out the bakery and candy business for a bit, the couple connected and renovated the two spaces to form a bakery and deli - now known as the popular Cottage Bakery.

After running his bakery for more than 30 years, Andrew says, "One thing we find owning a food retail establishment - like a bakery where you have to start at 2 a.m. to bake - that this is social as well as a business process. We've befriended a lot of customers over the years, and now it's getting to the time where some of them are passing away and we're sad to see them go.

"We've been able to acquaint ourselves with people who have big histories on the Peninsula, and you can gain guidance, their thoughts on how they did business here, and then you take what applies to you and you adhere to it. ... Some of the best advice I received from one of them was 'Just remember that you're in a small community, because everyone is related. So don't say anything bad about anyone because you might be saying something bad about someone's relative.'"

Fortunately, Andrew doesn't seem to be the type to need such advice.

Throughout his years on the Peninsula, Andrew has made it a point to be active in the community. For four years in the 1980s he served on the school board and acted as board chair for a couple years, where he says he "got a real understanding of working through bond issues, facilities and buildings and gained experience in how to work in the governmental process."

These days, he spends time working with Long Beach Merchants Association and the Loyalty Days committee.

"I think patriotic pride starts within each of us and so I believe that hopefully we are looking at teaching people to have pride in themselves, their community, city, county, state and nation. It's about instilling pride within yourself and a balance in being good to other people - don't do anything to others that you wouldn't want done to you. It's just a stepping stone. ... I think Loyalty Days is something where you can see how infectious patriotic pride is and how it affects others. It's about keeping the message going about our history, our forefathers and the military - the whole perspective of what that's all about and how our nation grew. ... Once we walk away from pride, we have nothing to hold on to."

Now in a leadership position for the city, Andrew hopes that the Loyalty Days event, its volunteer efforts and its message will continue to spread with support from city staff.

Heritage areaAnother project that receives help from the new mayor is the possible development of a National Heritage Area on the southwest Washington and northwest Oregon coasts. Through networking with former state Sen. Sid Snyder and groups like Destination: The Pacific, Andrew says he has gained knowledge in the legislative process and developed a working relationship with state and federal politicians like U.S. Rep. Brian Baird.

"They have been great teachers and educators. I hope to use those resources and what I've learned, so that people know that this little southwest corner of Washington is on the radar and that we are worth visiting ... We're working toward providing proof that we're worthy of being a National Heritage Area. Local communities have pledged to help and so far we've collected about $35,000 to $40,000."

According to Andrew, Washington State Rep. Dean Takko and Oregon State Sen. Betsy Johnson have pledged to support the second phase of fundraising for the National Heritage Area project. Meanwhile, supporters are waiting for local senators and representatives to guide a bill through committee and to the floor for approval.

Leaning on the councilReady to start his first city government position, Andrew says in the beginning he will have to "lean on the city council, staff and administrators" for guidance and available resources. He adds that exiting mayor Ralph Moore and the city council have been receptive to his interest in becoming mayor and helped define his mayoral duties.

"I believe that the business experience we've had here gives us an insight into how this community functions - its resources, what its ups and downs are, the economy and how it's driven, and the fact that hospitality is our industry. We need to be hospitable to the communities to the north and south of Long Beach, as well as municipalities, the county, the residents and businesses. The city has to have an understanding, an open ear [to residents' concerns], and the logic that their wishes, which may not be always be feasible, need to be at least considered."

Though he hasn't received much input or priorities from citizens yet, the mayor says he hopes to work closely with the business district so that their efforts do not go unrecognized - specifically when business owners fix up their buildings, add a fresh coat of paint or any other chore that adds appeal.

"Instead of saying 'Well it's about time,' we need to give them a pat on the back, which would encourage others to spruce up their community to create a positive image and progressive community atmosphere."

When it comes to Long Beach being a leader for the Peninsula, Andrew hopes that other communities follow in Long Beach's footsteps toward bettering the community when they see fit. But he also advises that each community retain their own unique qualities and "be supportive of other parts of the area that find a niche" worthy of rallying for and supporting.

"We can't pit communities against each other - we're only a mile apart!"

Growth planningAs for the city of Long Beach's comprehensive plan, Andrew says his first goal is to finally finish the plan. Secondly, he wants to make sure that the laws and guidelines are simple to understand.

"Many people have given their time in trying to get it worded in a fashion to make sure the comp plan can be easily read. Planning lingo means absolutely nothing to anyone other than a planner, so we need to quit talking in that language and put it in plain terms. It doesn't matter how elegant a word sounds, if we don't understand it, we won't know what your original intent was."

He also adds that while the plan is written in black and white, the city should also be open to compromising with investors from outside the area. Instead of turning down an investor's idea, the city should delve into the subject a little deeper to see what could be done to accommodate both sides.

"We need to make [the investors] feel like the city is willing to help them, rather than saying 'You can't do that.'"

The new mayor says he plans on sustaining open communication among council members and city staff and looks forward to working in a cooperative nature without hidden agendas.

"We won't always agree or have the same interest level, but we have to listen to each other so that the important things for the community are not being hindered by personal agendas. ... But there will always be differences of opinion, but that's why we use the democratic process."

"I'm very excited, this is a new experience that Judi and I are both looking forward to," explains Andrew, who encourages volunteerism and being active in schools and children's programs. "We have a great community base with volunteers that put in so much effort, it will be a great opportunity to work with them. I'm excited about the possibilities that are there and the opportunities that council pledged to support. ... I am looking forward to not only enhancing the livability of Long Beach, but the experience of our culture as part of the things with the National Heritage Area. ... I believe that the heritage of Long Beach and its surrounding communities still exists and that effort that it took to create it in the beginning, that community effort, is still here.

"I'm hoping we can tap it and see that kind of development happen - development where we get to keep the sense of community pride and individuality while still getting out to our visitors and surrounding communities. We have to provide them a unique experience while they're here visiting, playing, and all the other experiences we enjoy. ... This is a great place to raise a family and make a life here - we enjoy the benefits and fruits of living in a small community."

Ten years from now, Andrew says he pictures Long Beach "more discovered" and hopes that citizens will be involved in maintaining aspects of the city that are already established. He also envisions dunes protection and manageable growth that creates an economical and livable area.