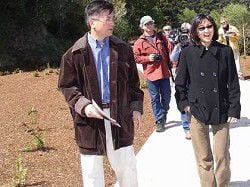 <I>NANCY BUTTERFIELD photo</I><BR>Maya Lin and old friend former Washington Gov. Gary Locke got together for a schmooze Saturday before the dedication of the first Confluence Project to be completed, the fish cleaning station at Cape Disappointment State Park. Despite the official opening, considerable work remains to be done at the site. 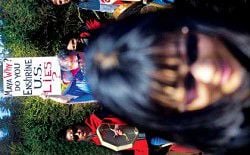 <I>DAMIAN MULINIX photo</I><BR>Indian activist Robin Taylor, who believes Chinook people still hold underlying legal title to much of Pacific County, protested Lin's involvement in the Confluence Project. Taylor says the project and other things like the new Lewis and Clark National Park give legitimacy to the alleged unlawful occupation of the area by interlopers.

<I>NANCY BUTTERFIELD photo</I><BR>Maya Lin and old friend former Washington Gov. Gary Locke got together for a schmooze Saturday before the dedication of the first Confluence Project to be completed, the fish cleaning station at Cape Disappointment State Park. Despite the official opening, considerable work remains to be done at the site.

<I>DAMIAN MULINIX photo</I><BR>Indian activist Robin Taylor, who believes Chinook people still hold underlying legal title to much of Pacific County, protested Lin's involvement in the Confluence Project. Taylor says the project and other things like the new Lewis and Clark National Park give legitimacy to the alleged unlawful occupation of the area by interlopers.

CAPE DISAPPOINTMENT STATE PARK - The weather couldn't have been better Saturday for the official opening of the first of seven Confluence Project installations at the fish-cleaning station at Cape Disappointment State Park. A couple of small racoons and a river otter played in the water of Baker Bay at the newly constructed oyster-shell path to the viewing platform near the park's boat launch before the dedication of the installation designed by artist Maya Lin.

The Confluence Project sites, five of them in Washington, will be placed along 450 miles of the Columbia River, to Chief Timothy Park near the confluence of the Clearwater and Snake rivers, and are scheduled to be completed by March 2008.

"I've never been here on a bad day," said Lin, who has visited the area several times in the five years the Confluence Project was in the planning stage.

"This is perfect weather," former Washington Gov. Gary Locke said. An old friend of Lin's, Locke was instrumental in persuading her to take on the multimillion-dollar project five years ago.

Because the weather this winter was mostly unrelenting rain, though, and although the fish-cleaning station is nearly 100 percent completed and the viewing platform is complete, the third portion of the project, at Waikiki Beach, has yet to be finished.

Lin said the Waikiki installation "will take some time. It's a great first project in the series. It was a rough winter, but what do you expect? It is called Cape Disappointment, after all." She said the entire project should be completed by Memorial Day this year.

"The platform and the fish-cleaning station show how important the Columbia River estuary is," Lin said. "How it's changed. Before, this was a turnaround, it was all for the car. People were prevented from seeing what they came here for. When they see it now, they know they can use it and get back to an immediate connection with the area and its ecology. The three pieces are connected by a path from fresh water to salt water, connecting the ecology of the place."

"This makes the park so much better," Locke said.

Jane Jacobsen, executive director of the Confluence Project, welcomed about 150 guests at the Earth Day event. "This place will talk to us about where we are and how important these places are," she said. "I hope the confluence of time and place will be in your hearts and your eyes. It's a place of reflection, a place to find your place in the world, a crossing to safety and to find by whatever means how to make the world a better place."

"People will come here because of Maya's fame," Locke said, "and be intrugued. But when they come, they will understand the confluence of time, people and the environment. It will challenge them to think of what is, was and should be and how we take care of the land. They'll think beyond the facts and the story of the Lewis and Clark Expedition.

"This was the most complex of all the sites," Lin said. "It puts the viewer on the edge of nature. People have been too removed from place because the car has taken over. Every site is connected back to the land. I used the words of Lewis and Clark as a lens, to give clear insight into what it was like here 200 years ago and the interaction with the tribes who helped me frame the sites. This isn't three separate sites, it's one, connected by the environment."

Gary Johnson, chairman of the Chinook Indian Tribe, blessed the area in the Chinook language during the dedication and said the area was the site of the westernmost Chinook village. The basalt fish-cleaning station is engraved with the words of the Chinook creation myth.

Locke and Lin then cut a braided sea-grass ribbon to open the first Confluence Project site for public use.

"For Lin, art is about thresholds: places where she can create direct and powerful connections between the viewer and the natural world. At Cape Disappointment, her design reflects the ecological complexity of the ocean shoreline and the edge of Baker Bay. Here the saltwater of the ocean blends with the fresh water of the Columbia River to create a teeming estuary, which influences the life of plants and animals over thousands of square miles.

"The Cape Disappointment site encompasses a restored oceanfront dunes area. Boardwalk planks leading to Waikiki Beach are inscribed with a summary from Lewis and Clark's Jornals of their westward journey. Symbolically paralleling this path is a quieter, more secluded path of crushed oyster shalls that follow basalt formations along the shoreline as it was 200 years ago, before jetties reshaped the landscape. Along this path is set the text of a Chinoo praise song spoken at Cape Disappointment by a member of the tribe exactly 200 years to the day after Lewis and Clark arrived at the site. The oyster-shell path ends in a circle of seven cedar driftlog columns, found along the beach and resurrected to form a quiet glade at the point where the coastal forest meets the dune grass. The number of columns was determined by the seven directions recognized by Native American tradition: north, south, east, west, up, down and within.

"Another pathway, connecting the ocean side of the site to the bay side, takes visitors through restored wetlands and describes the shifts that occur as ecosystems change from salt to fresh water. At the bay, an arc-shaped viewing platform and basalt fish-cleaning table are set next to the water, drawing the visitor directly to the edge. The basalt table replaced a fusty cutting sink, which was previously installed for fishermen at the site. The new table is inscribed with a story of the Chinook origin that recounts the emergence of the Chinook people from the body of a fish that had been cut open the wrong way.

"The Cape Disappointment site subtly juxtaposes the ways in which different cultures relate to the earth. At times the hand of the artist is barely detectable - and yet she reshapes the site to create a new way of experiencing this place."

COVID-19 deaths aren't just numbers. An Omaha family moves on without their 'glue'

Acrylic glass, masks, warning signs: Is this the office of the future?