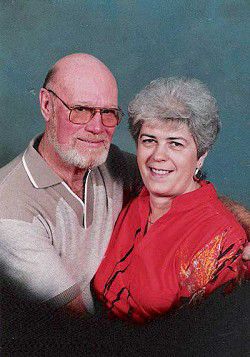 <I>Photos provided by Dick Watrous</I><BR>Morene Martin died in July bur her memory is treasured by long-time companion Dick Watrous and all who knew her as a humorous and constructive force at the Ocean Baech School District office. 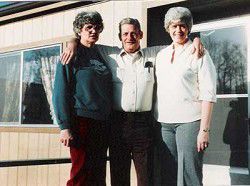 M&M, right, shares a hug with her neighbors and friends, Al Siewart and Margaret Fithen, in 1986.

<I>Photos provided by Dick Watrous</I><BR>Morene Martin died in July bur her memory is treasured by long-time companion Dick Watrous and all who knew her as a humorous and constructive force at the Ocean Baech School District office.

M&M, right, shares a hug with her neighbors and friends, Al Siewart and Margaret Fithen, in 1986.

PENINSULA - Strong, smart, warm and witty, Morene Martin had a big heart that was shared with many in her years working for the Ocean Beach School District. At 74 years old, she had a knack for remembering the details and knew nearly everyone on the Peninsula - and most everyone knew her as well, but they just called her M&M.

After more than 20 years with the school district, Martin recently gave notice that she would be retiring at the end of this month - a well-deserved break for her to do the things she loved most, like puzzles, old music and old television shows, and playing cards - especially solitaire.

"She would go and dance at the Elks Lodge," says Dick Watrous, her companion for more than 30 years. "She would sing with Eileen on the organ; she had a beautiful voice."

Unfortunately, Martin's hobbies were put on hold when she was diagnosed with cancer shortly after her notice of retirement. And after a sad turn of events, Martin died at Providence St. Mary Medical Center in Walla Walla on July 25.

It was sad enough for school district employees that their dear M&M was going to be leaving the office soon, but the fact that the welcoming coworker - the woman who knew everyone in the community and genuinely cared about their kids and grandkids for over two decades - never got the chance to experience retirement, that was news that was almost too much for them to bear.

Martin was born in Walla Walla and graduated from McLoughlin High School in Milton-Freewater, Ore. After high school, she moved to Portland and worked for Glaser Bros., a candy and tobacco wholesaler that eventually became Core-Mark. Living in Camas, she and Watrous moved to the beach following his retirement in the early 1980s. In 1986, she was hired for a secretary position at Ilwaco Junior-Senior High School. In 1988, she moved to the district office, where she also worked as a secretary. She later worked in accounts payable and then took on the job as the superintendent's secretary.

School leaders treasured her Longtime school board member Kim Patten says Martin outlasted six school district superintendents and often "kept the ship afloat." He remembers her as being friendly, open and confident, and having a welcoming smile and a great sense of humor. As the superintendent's assistant, Patten says Martin strongly supported betterment for children and their education.

Ocean Beach School District Superintendent Boyd Keyser says, "I think what I remember about M&M is this dry sense of humor that she would kinda slide in there. I remember when I first came here and she was showing me around, she said to me, 'You know young man, I just want you to know that I don't do coffee.'"

Having worked with Martin from 2003 to 2006, former superintendent Tom Lockyer says Martin treated everyone with care and sincerity. She understood the inner workings of the community, and often acted as a historian for him.

"I relied on M&M an awful lot," he admits. "As a superintendent, you rely on your administrative assistant to know what's going on around you, the culture, your staff, the community, and having the proper perspective."

Former superintendent Rainer Houser agrees that there were numerous qualities to love about Martin - she was loyal to the district, confidential, eager to help people and treated them professionally, and knew nearly everyone on the Peninsula.

He explains, "She had this intertwining of personality traits of sense of humor, professional quality, capability and capacity to do things, and there was always this element of 'Don't tread on me.' ... She was highly qualified to do her job, she loved the kids in the district, loved the employees, she truly loved her job."

"She was obviously a fine lady for the front office of the school," says Ocean Beach School Board member Sandy Stonebreaker. "She was the voice of the school district for long time ... a very positive, very upbeat, very nice lady."

Houser says Martin was an employee whom he valued who later became a good friend.

"Most of my stories about her can't be shared, that's what was great about M&M," he admits with a laugh.

"The thing that always strikes me when I look back to that first year, when a new superintendent comes into an office you have to rely on the people there and you look for the people who know the history of district, where the bugs are and where pluses are, and you really begin to work your way with that person to gain that knowledge that they have," remembers Houser, who worked with Martin from 2005 to 2009. "She was literally invaluable to me, she knew previous administrations, the policies and the rationale behind them, she knew all the folks in the district, where I could get assistance, and she knew where to find things, like deeds."

Former school superintendent Nancey Olsen describes Martin as an "experienced right-hand woman who knew the ropes and knew how to help you get through your first year and grow into your position."

She adds, "I think as a new superintendent, it was nice to know someone who knew what was going on. She was just someone you knew you could count on to do the right thing. She was kind, helpful, and never judging."

From colleague to friend "I knew M&M from 1990, when I came to the district," remembers Geri Marcus, education manager at Ocean Beach Hospital. "She was always there when I came to the district office with my children, and watched them grow up between visits, and always asked about them and enjoyed seeing pictures and hearing stories. Getting candy from M&M's desk was a family ritual - my kids, husband, even my dad partook. I had the great honor of working along side her in the district office from 2003 to 2010 when I was the special education director, and she was a vital part of the district office: always ready to help when needed, and knew the answers to so many things. You could count on her to know who somebody was, because she'd been around for so long. She made good friends with my dad, who would come to the district office to visit me. She will be truly missed by so many people."

"I was only able to spend three years with M&M, but boy she was such an integral part of that community and the district," Lockyer recalls. "I remember the first day when I came in they introduced me to her as M&M ... Seeing as those were the two initials of her first and last names, she was the sweetness of the candy, she treated everyone with kindness and respect."

"She and her husband were always warm and opening. They canned their own salmon, and fish and halibut, and that was always a great treat. It was a great gift I looked forward to at Christmastime, birthdays, whenever."

"There was nobody else like M&M," Lockyer concludes. "She was the mother hen of the [school district] family."

"She knew everyone," Keyser adds. "She knew the story behind the person, and it was always in a positive way, not spreading rumors, nothing negative, but she knew about their families, where they worked ... It's the institutional memory that we're at a loss with right now."

"She was a loss, she not only was a highly valued employee, but she was a friend," Houser laments. "And every time, still even after I retired, when I'd come back she'd greet me with a hug, it was a friends relationship. That was M&M, one of those special people that you'll think of for many, many years and when you do a smile will come to your face."

Maureen Ellsworth, Martin's coworker for 22 years, says, "We began as coworkers and it turned into a friendship. M&M was family; she treated my daughter Brenda like her granddaughter. She was always supportive, a good listener and I loved her laugh. Anyone who knew her will tell you she was a special person, one of a kind. I wish my time with M&M was not over. I miss her very much everyday, but she leaves me with decades of memories and love. She was a pillar of strength to the end. I will always remember her words, 'It will be OK.'"

Video: Boat dangling from the edge of dam rescued