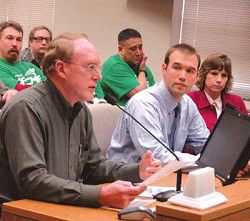 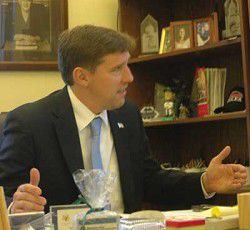 OLYMPIA - "You might as well take the R out of JRA (Juvenile Rehabilitation Administration)," 20-year veteran counselor at Naselle Youth Camp Jerry Elliott vehemently testified to the Washington Senate Ways and Means Committee during a hearing last Wednesday in Olympia. He was speaking of Gov. Chris Gregoire's budget proposal that would reduce NYC to 50 residents when the facility is designed for 148 and currently houses 88 juvenile offenders.

The impassioned Elliott told the Ways and Means Committee, "Naselle Youth Camp is not only a model of success in our state, but has received national recognition as a model for its programs. We have more high school diplomas and GEDs (General Equivalency Diploma) than any other institution. Why would the Governor want to cut us back to being a work camp with 50 kids? Why would she want to cut any successful programs at any of the institutions?"

Jack Smith, also a NYC counselor with over 20 years experience, testified, "Last year our DNR program sent kids to help put out twice as many fires around the state as the year before. Our programs at NYC are like putting out fires. It is much easier to put them out when they are small than when they are out of control. Our school and work programs at NYC do make a difference in our residents' lives and in many cases keep them from re-offending as adults. Please support Senate Bill 6039 Sentencing for Treatment."

Governor proposes to cut camp enrollment The governor's proposed budget would move 124 juvenile offenders to group homes scattered around the state, often in urban settings that are far less secure and that are without the educational, treatment, and vocational opportunities available from facilities such as NYC. JRA's mission statement is to protect the public, hold juvenile offenders accountable for their crimes, and reduce criminal behavior through preventative, rehabilitative, and transition programs.

Consultant Christopher Murray & Associates' testimony to the Ways and Means Committee included making significantly larger cuts in Maple Lane and Green Hill JRA institutions. Murray recommended in November to close Maple Lane, for a savings of $17 million, but with a net loss of 122 jobs statewide. There was no mention of NYC in any of the report's four recommendation scenarios.

Adam Aaseby from the Governor's Office of Financial Management stated, "Our proposal will reduce Naselle Youth Camp to 50 beds for those who participate in the forestry program. We will cut Green Hill by two wings (20 beds) and will cut Maple Lane by one cottage (24 beds). We will move 53 (juvenile offenders) to two community facilities that we will reopen and that will save $5.3 million over the next four years, but 50 fulltime equivalent (FTE, jobs) will be lost."

Last Tuesday Gregoire in her State address said, "The last time we closed an institution was in the 1970s. Now is the time to demonstrate that Washington government makes good business decisions, not political ones." Jon Tienhaara, assistant principal of Naselle schools, shared with the Ways and Means Committee a 2010 policy brief titled "Government Working Smarter." It begins, "Governor Gregoire is proud that Washington has reduced its juvenile detention population by almost half in the past decade." Tienhaara pointed out that 70 percent of adult offenders were adjudicated in the JRA system.

The policy brief stated, "The Governor believes the money invested in juvenile rehabilitation benefits the state through lower recidivism and less crime. Research shows reaching offenders early results in fewer offenders as adults. By moving our youth offenders to secure community settings and offering proven treatment models we can make communities safer, save money and offer a brighter future."

Arne Wirkkala, Naselle business owner and long-time school board member, told Sen. Brian Hatfield in a meeting following the hearing, "We have a Blue Ribbon school at Naselle and a community that is solidly behind Naselle Youth Camp. NYC takes these kids away from the drug scene and they are in a church-going community where they are cared for. By helping these kids now we will actually be saving money down the line when they are productive citizens instead of being in prison."

Lisa Nelson, NYC School principal, was on deck to testify when time expired, but said later, "For us to lose about 35 jobs in a community of 350 people will be devastating. The NYC School will have to make many changes if our population is cut to 50 students."

Sen. Hatfield told the NYC group, "Reps. Dean Takko, Brian Blake and I will continue to fight for Naselle Youth Camp. It seems there is no end to having to battle to keep it open and operating at its fullest capacity." He cautioned, "The reality is that we do have a financial crisis (in Washington state) and we will either have to make cuts or increase revenues."

Smith said, "Last year Senator Jim Hargrove (chair of Human Services and Corrections Committee from Hoquiam) came to our assistance at NYC by supporting the DNR program and he was invited to the Ways and Means Hearing. That is a good sign."

Over the last decade the number of juvenile offenders has dropped from about 1,400 per year to about 700 and is projected to even go lower than that in the next few years. Senator Hargrove mentioned that one reason for that decline is due to positive programs he and other legislators have put in place during that time.

More hearings were scheduled for Jan. 18 in Olympia on the Governor's proposed supplemental budget and Jan. 19 for the Sentence for Treatment bill. About 60 people signed up to testify, but only six had their turn at the microphone, including Elliott, Smith, and Tienhaara from Naselle. The two-hour hearing was videotaped and can be viewed at (www.tvw.org).

States raise $117 billion to fill gaps, at least 30 raise taxes OLYMPIA - Washington state's budget crunch is well-chronicled and many worthwhile endeavors such as Naselle Youth Camp hang in the balance of legislators' decisions and yet Washington is just one of many states in a state of financial flux.

Across the nation, state tax collections in the first three quarters of 2009 posted their steepest decline in at least 46 years, according to a report this month from the public policy research arm of the State University of New York. At least 30 states raised taxes in their most recently completed fiscal year which ended in most cases in mid-2009. Even more states, including Washington cut services. All told, states raised $117 billion to fill last year's budget gaps, the Pew Center on the States estimates.

Yet despite all those new taxes and deep cutbacks, pressure on state finances continues to build. Economists warn that without a new round of federal stimulus spending, states could face another round of layoffs that could kneecap an already shaky economic recovery. "We could see a real ripple effect if the states don't take a balanced approach" by balancing cutbacks with tax raises and other new revenue, said Jon Shure, deputy director of the state fiscal project at the Center on Budget and Policy Priorities in Washington.

State and local governments have cut 132,000 jobs since August 2008, the center says. Fiscal problems appear most acute in California, whose general obligation bonds were downgraded this week after Gov. Arnold Schwarzenegger declared a fiscal emergency. The state has already said it will increase tuition by a third in the University of California system, among other cash-raising moves. California has asked for federal help and warned it could run out of cash in March 2010.

And California is not the only state facing an almost unfathomable shortfall. Arizona and Illinois face budget gaps above 40 percent of projected general fund spending, according to Pew data. Arizona put its state office buildings on sale this week in a bid to raise $700 million. The University of Illinois furloughed some workers this week after the state failed to come up with $436 million in expected funds. Budget officers in those two states describe their outlooks for fiscal 2010 as dire, according to a National Conference of State Legislatures report.

Alaska, Nevada, New Jersey and New York face gaps of at least 30 percent of their planned general fund spending by the end of this fiscal year. A dozen more states face a fiscal 2010 budget gap of between 20 and 29 percent. Big shortfalls scare legislators because states by law must balance their budgets every year.

After revenue and spending rose steadily in the middle of this decade, bolstered by a housing bubble that boosted employment and fed a stream of property transfer fees, state funding went into freefall when the recession started at the end of 2007. The domino effect of that crash is now filtering down to areas as far from Washington, D.C. as Pacific County.