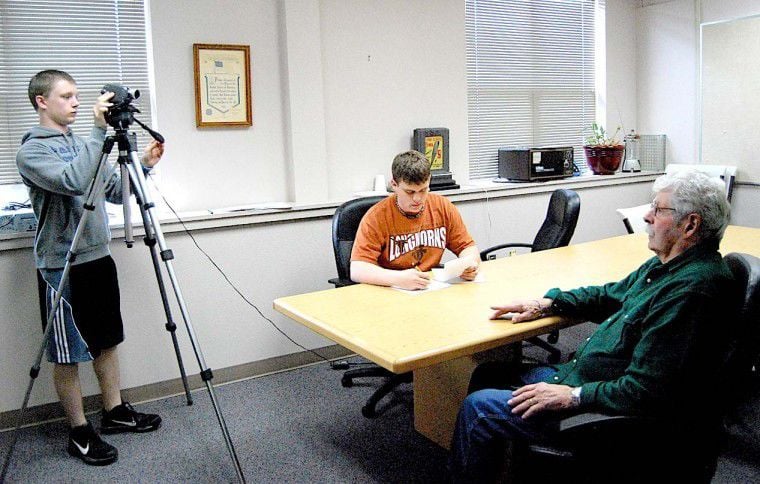 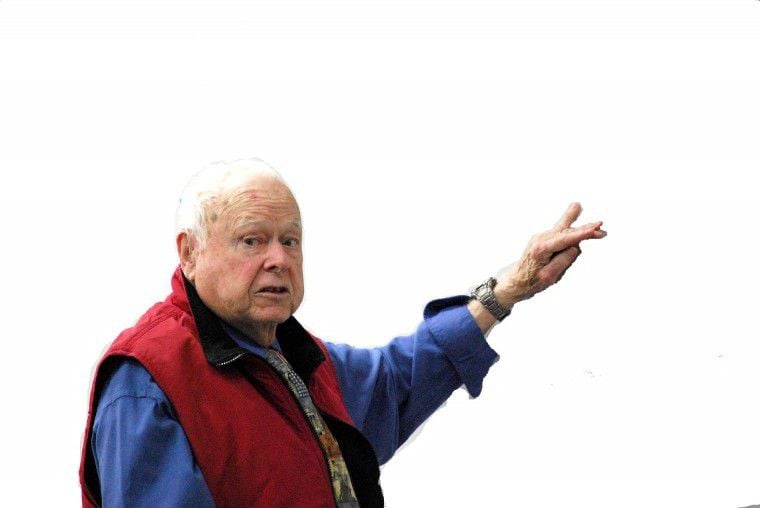 NASELLE  Following Veterans Day last year, Naselle High School teacher Rob Dalton proposed a joint project between the school, Appelo Archive Center in Naselle and American Legion Post 111 in Deep River. The project was to have NHS juniors in Daltons U.S. history class interview veterans living in the school district and videotape the interviews so they can be preserved for future generations.

As a part of that project, Tavish Hammonds and Rachel Underwood interviewed Naselle resident William (Billy) Wuorinen. As the interview unfolded, Hammonds and Underwood learned that the retired logger is a true hero of the Korean War, but had never been awarded the Silver Medal he had been promised and rightly deserved.

During the battle for Gibraltar Hill on March 17, 1953, combat was so fierce that 134 of the 150 men in L Company were either killed or wounded.

After completing their interview with Wuorinen, many NHS students wrote letters to U.S. Rep. Jaime Herrera Beutler and other U.S. elected leaders describing Wuorinens situation and requesting that the U.S. Army award Wuorinen the recognition he deserves. In a parallel action, American Legion Post 111 in Deep River is making a similar request through military channels.

Herrera Beutler, after meeting with the American Legion and receiving the letters from the NHS students, made a formal request to the military on Mr. Wuorinens behalf.

A day of blood and heroism

Here is an account of that day in Korea:

At 2 a.m. on March 17, 1953, the 150 men of L Company, ninth Infantry Regiment, second Division, joined the battle to take Gibraltar Hill in Korea. The hill was occupied by two regiments of Chinese soldiers, who had the advantage of the high ground. The fighting was fierce during those early morning hours.

Of the 150 men in L Company, 134 were either killed or wounded during the battle. Sometime between 5 a.m. and 6 a.m., Wuorinen, a rifleman in L Company, spotted a wounded soldier lying on the open ground. He and another soldier, Pvt. Courtney L. Stanley from I Company, decided that with the Chinese advancing toward him, the soldier was sure to be captured or killed if they did not get to him first.

They were able to reach the wounded man and quickly dragged him to a foxhole. That soldier was Col. Harry A. Clark, Jr. from Easy Company. He was badly wounded in the legs and was losing blood fast. Wuorinen told Stanley, One of us has got to keep those Chinese back while the other stops this guy from bleeding to death.

Stanley replied, I cant stand blood. Ill try to keep them back while you work on him. He began firing his Browning automatic rifle at the 16 Chinese soldiers who were firing at them and advancing on their foxhole. Wuorinen cut open Clarks pant legs and began applying tourniquets to both legs. Remembering his military first aid training, he kept track of the time and loosened the tourniquets every 15 minutes for a short period of time in order to prevent gangrene from setting in.

Not long into his defense of the foxhole, Stanleys weapon jammed. Wuorinen told him to take his M1 rifle and, in between loosening of the tourniquets, he dissembled the Browning rifle and managed to clear the jam so Stanley could put it to use again.

The fighting got so close that, at one time, Clark directed them to take all of their personal possessions except their Geneva Convention cards and burn them. They quickly placed their wallets and other possessions in a pile and ignited them. Several times Wuorinen and Stanley ran low on ammunition and had to run stooped over in trenches from foxhole to foxhole collecting what shells they could find.

With each loosening of the tourniquets, the bleeding in Clarks legs slowed. Around 8 a.m., Wuorinen and Stanley could see U.S. soldiers advancing up the hill toward their position. By the time soldiers came upon the occupants of the foxhole, Stanley had killed eight of the advancing Chinese and Wuorinens tourniquets had stopped the loss of blood from Clark.

As Clark was being prepared to be carried to the medical area, Wuorinen used some of the colonels blood to write on the colonels forehead the time the tourniquets had last been loosened. As he was about to be carried away, Clark thanked both men for saving his life and stated he would put each of them in for the Silver Star.

Both Pvt. Stanley and Col. Clark were awarded the Silver Star. Pvt. Stanley was later awarded the Distinguished Service Cross, as well. To this day, the only recognition by the military for Pvt. Wuorinens actions was a battlefield promotion to staff sergeant.

Several decades after that event, Wuorinen contacted Clark, the man whose life he helped to save, and told him he had never received the Silver Star. That was a long time ago and I no longer involve myself in military things, Clark said and hung up his phone.

The main focus of our interviews with the veterans is to get first-hand accounts of how they made their military choice, what their families thought of them joining the military, what the military was like back then, and if they thought it was a good experience for them and what they got out of it, Dalton said.

Patterson met with the junior history class last Friday, April 29, to continue their series of interviews with veterans.

Patterson was born in 1929 at the beginning of the Great Depression. When he was six years old, his mom had died and his dad became sick, so he and his other three siblings were farmed out and he ended up living in Spokane with an uncle and aunt. He eventually ended up living with his older brother who he hadnt seen in many years, which he said was probably the best thing to happen to him.

Patterson joined the Army Air Corps in 1947 where he was part of the occupation force in Japan. He later served as buck sergeant, as the chief gunner on the top window on the B29 during the Korean War  he mentioned that he had the best viewpoint. He flew 31 combat missions and went on to share some stories of tracers the size of a basketballs flying right by his head and how the MIGs would come out of the sun. He was stationed in Okinawa for many of his trips into MIG Alley. Patterson shared his viewpoint on the restrictions of war for both the Korean War and Vietnam  he felt that we should have crossed into China to bomb the MIGs on the ground rather than wait to try and get them when they were in the air.

He then shared how he ended up coming to Naselle. He said that after meeting then school Superintendent Grabenhorst, he found a guy that he could work for and became a math teacher. The class got to ask him questions about coaching football and basketball, and he commented on some of his best teams and players throughout the years.

Patterson ended the presentation by telling the kids that life is about trying to find a job that they like.  If you find something that you like to do then it isnt work, Patterson said, and told them whatever they choose to do they just need to work hard at it.