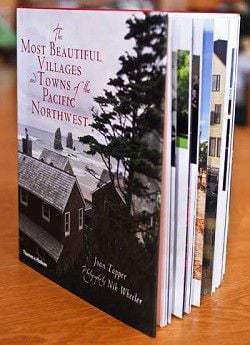 Cover of the new book 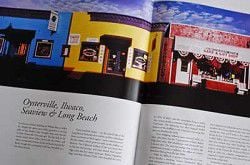 The opening spread of the section on the Peinisula features a photo of the colorful downtown Long Beach shops.

Cover of the new book

The opening spread of the section on the Peinisula features a photo of the colorful downtown Long Beach shops.

LONG BEACH - Peninsula residents and town planners are basking in recognition with last week's publication of "The Most Beautiful Villages and Towns of the Pacific Northwest," by the founding editor of National Geographic Traveler magazine.

Focusing on Washington, Oregon and British Columbia, this celebration of our region's most picturesque small towns features Oysterville, Ilwaco, Seaview and Long Beach on this side of the Columbia. It also includes nearby Astoria and Cannon Beach across the river.

Joan Tapper's big, glossy coffee-table book is splendidly illustrated with photos by Nik Wheeler, whose work has been published in National Geographic, The Sunday Times Magazine and many other publications.

Following the Great Depression and 20th century boom years in bigger places like Portland and Seattle, "The little towns may have languished, but they didn't disappear," Tapper writes in her introduction.

"Artists discovered them. Vacationers flocked to their beaches and mountains. Preservationists renovated their architectural treasures. Farmers replanted their lands with desirable new crops. Decades later, these places are travelers' delights, charming gems populated by passionate advocates for local heritage who are happy to share their corner of paradise."

Despite the demise of the Ilwaco Railroad & Navigation train in 1930, Tapper notes of Long Beach, "Visitors have never stopped coming ... drawn by unsullied ocean beaches, delicious oysters and clams, a relaxed atmosphere ... and constant breezes.

"It turned out that the flat sands and reliable winds were perfect for kite aficionados, who for some 30 years have gathered in Long Beach by the thousands for their summer festival. The town also is home to the World Kite Museum, whose collection ranges from historic and scientific kites to colorful examples from around the world. Kite in hand or not, you can stroll the beach, breathe in the sea air, and let your spirits soar."

The book has many other complimentary things to say about the other towns on the Peninsula and in Clatsop County. It also singles out several local lodging places and restaurants for travelers who will use the volume for inspiration. These include the Depot Restaurant, Shelburne Inn and Restaurant, The Breakers, Charles Nelson Guest House, Jimella's Seafood Market and Pelicano restaurant.

Our Peninsula communities were the only towns honored on Washington's ocean coast or in the entire southwest quarter of the state. Elsewhere in Washington, most of the most scenic villages and towns are clustered around Puget Sound: Port Townsend, Gig Harbor, Coupeville, La Conner, Friday Harbor and Eastsound. The prettiest places east of the Cascades are Winthrop, Ellensburg, Walla Walla and Dayton.

The book is $40 from the major Thames & Hudson publishing house.

Raju: This could complicate a lame-duck session even further