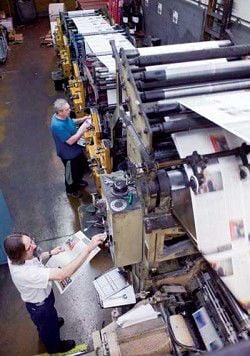 The final edition of the Astorian is printed on the old press. 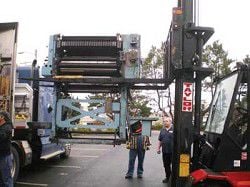 The new press is unloaded by forklift.

The final edition of the Astorian is printed on the old press.

The new press is unloaded by forklift.

ASTORIA - The Chinook Observer looks a little different this week, as our parent compant, East Oregonian Publishing Co., makes a major investment for the 21st century.

In one of the biggest possible changes for any newspaper, the Daily Astorian is installing a new "gently used" press. By special arrangement, our neighbors at the Longview Daily News are printing both the Observer and Astorian this week only.

During this installation period, each Observer page will be made into a PDF (portable document format) and sent electronically to Longview. There, the newspaper will be printed then transported back to local offices where inserts will be added and distribution completed at the usual time.

Probably the only difference noticeable by readers this week is where color ads and photos appear inside, because of how the Daily News' press is configured. For example, the color ads that usually appear on Page A2 appear on Page A3 for this week only, while sports photos on Page B2 appear in black and white.

A major part of the Astorian's new press installation was accomplished over the weekend. As the old 1970s-era press was switched off Thursday afternoon after its last run, crews began tearing it out. This was accomplished by midafternoon Friday.

The units of the new press were moved into place by forklift during the weekend, and they were assembled in the pressroom.

This week's work includes installation of paper slicers and systems to deliver water and ink to the press.

The newer press units will increase the color capacity of both newspapers and bring a variety of other improvements, while ensuring the reliability of the printing process for decades to come.

A Web cam that takes photos every five minutes has been installed in the Astorian pressroom, so people can follow the progress online at (www.dailyastorian.com/press).

Putin faces question about cyberattacks against the US

'They're lying and they know it': Cooper slams GOP over insurrection