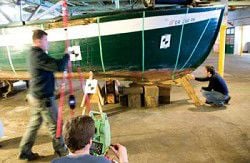 <I>Photos by ALEX PAJUNAS - The Daily Astorian</I><BR>Brian Nice, middle, a student intern from Clatsop Community College, uses a Leica total station to record points along the bow of the Bumble Bee 11 gillnetter outside the Hanthorn Cannery Foundation in Pier 39. 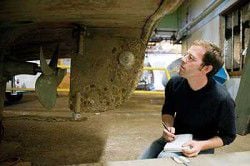 Emmett Smith, who was contracted to help with the research and mapping work, sketches out a drawing of the Bumble Bee 11 noting details of the shape of the boat's hull.

<I>Photos by ALEX PAJUNAS - The Daily Astorian</I><BR>Brian Nice, middle, a student intern from Clatsop Community College, uses a Leica total station to record points along the bow of the Bumble Bee 11 gillnetter outside the Hanthorn Cannery Foundation in Pier 39.

Emmett Smith, who was contracted to help with the research and mapping work, sketches out a drawing of the Bumble Bee 11 noting details of the shape of the boat's hull.

COLUMBIA RIVER - It's one of the most recognized boats on the Columbia River, and there are plenty of books about its fisheries, but you'd have a hard time finding a book about the gillnet boats themselves.

Starting this summer, Sam Johnson, the executive director of the Columbia River Maritime Museum, hopes to change that.

After all, history has the tendency to disappear unless someone writes it down. Boat builders die, leaving only their boats behind them. No plans, no records. The boats themselves rot, or sink or are sold.

"We need to not repeat the past. We need to write these things down," said Jon Westerholm, former gillnetter and a member of the Columbia River Fishermen's Protective Union.

In what could be seen as equal parts important preservation work and unabashed wooden boat love, the Columbia River Maritime Museum has coordinated with the National Park Service and Clatsop Community College to document fishing vessels of the Pacific Northwest in general and the Columbia River in particular.

Between the different organizations, they've amassed thousands of dollars worth of equipment and manpower.

Using a variety of techniques and tools, the team - a mix of museum and park professionals, students and independent researchers - is locating and identifying "the most important boats of the region, to take their measurements and make drawings of their parts and to record how they evolved and were used," Johnson said.

Preservation on paper If they wanted to rebuild a given boat from scratch, they'd have enough information.

It would be almost impossible to preserve these big boats in a museum, Johnson said. On paper, you can preserve hundreds.

Though the team plans to document many other types of boats, the gillnet fleets seemed like the logical place to start: they are so well known and the museum has access to several locally. The museum worked with Westerholm and other gillnetters to develop a list of what types of gillnet boats should be documented.

The collected information on the boats - combining detailed measurements and 3-D mapping with historic interpretation - will eventually be available online and through the Library of Congress. The museum, meanwhile, hopes to assemble a book - maybe one of the first dedicated exclusively to the evolution of the gillnet boats of the Pacific Northwest.

On a recent morning, some members of the team drove to Pier 39, to the former cannery that houses the Bumble Bee 11, a gillnet boat, built in Astoria in 1954 to fish Alaska's Bristol Bay.

Her stern looks like a villain's moustache. Instead of the sides curving down to form a triangle point at the middle, they curve down and in and dip upwards.

Todd Croteau, maritime program coordinator with the National Park Service's historic American engineering record, pats the boat. "These could get in shallower waters the way they were designed," he said.

Croteau has several tools at his disposal: a scanner called a "total station," that spits out one laser point per hit of the button, and the much more impressive (and much more expensive) LIDAR scanner that throws out thousands and thousands of points. LIDAR, a remote sensing technology, stands for light detection and ranging.

Plotting with photos The team is also experimenting with a technique called photogrammetry, which uses multiple digital photographs instead of lasers to plot points along the boat.

Using the lasers and photos, Croteau and his team - an intern from Clatsop Community College, Brian Nice, and Emmett Smith, an independent contractor versed in restoration work and research - create 3-D images of the boat. The bright points, laser tips with their own coordinates, show up on a computer screen.

Connect the complicated series of dots, add a skin and, with the computer program adding some helpful lighting to bring out the contours and dimensions, you have a digital boat. It can be flipped every which way, peered into, scrutinized.

Mixing in other information gathered during the scanning process, Croteau can even summon up the colors and textures of a mapped boat.

"Since my students do historical restoration, the boat work is a natural fit," Swerdloff said. His students are used to measuring buildings like the Hotel Elliott or the Astor Hotel in Astoria, but the same techniques can be adapted to the boat documentation, he said.

One problem the team faces is the question of when to stop collecting details. An obsessive documenter could go crazy measuring nail lengths, but is that information necessary?

"It's a debate," Johnson said. "Are you measuring (a boat) just to come up with plans to build more boats or are you also looking at the archeology of the boat?"

Some halibut schooners, he said, have spots where the fishermen stood to work that are so worn down you can see actual footprints.

Even with the lasers, the team still has to look at a boat closely, hunkering down deep inside with a camera, paper and a pencil.

"If two people set out to build the same boat, we'd build it slightly differently," he said. Master boat builders leave their own kinds of signatures on the boats they've built and experienced fishermen can recognize the differences, he said.

"So long as we can recognize that, we should record the differences, the subtleties," he said.

The goal is to get through six to nine different gillnet boats this summer. After the six weeks, even if all the final drawings and historical interpretations aren't finished, at least the measurements will be complete, Johnson said.

He hopes the Maritime Museum will become a center for boat documentation efforts and Swerdloff is ready to provide student interns. The students receive college credit and a stipend through the internships while the museum gains willing and knowledgeable workers.

The National Park Service provided the funds for Smith's internship through the Council of American Maritime Museums and also paid for Croteau's time and the use of park equipment.

As if to affirm the work could very well continue into the future, the museum recently received a grant from the Oregon Cultural Trust that boosted the museum's project funds to $25,000.

Johnson hopes to use the money to purchase a total station (they are currently borrowing Croteau's) and other equipment, and to fund the writing of a manual so others can learn how to document boats using the techniques the team will be perfecting over the summer.

Pennsylvania lawmaker to GOP: 'Are you not 100% White?'