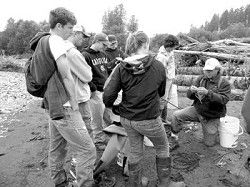 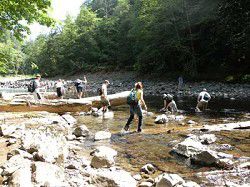 Students perform exploratory monitoring on the south fork of the Grays River in Western Wahkiakum County.

Students perform exploratory monitoring on the south fork of the Grays River in Western Wahkiakum County.

As part of the Columbia Estuary Environmental Education Program (CEEEP), now in its fourth year, the group spent five weeks in the woods of their own "neighborhoods," and in streams of Pacific and Wahkiakum counties, mapping and assessing streams, invasive weeds and fish habitat, gaining first-hand knowledge of the area.

NHS seniors Tylor Nortrup, 17, and Conor Smith, 18; juniors Alan Erickson, 17, Drew Macy, 16, and Charley Scalzo, 16; sophomore Kyle Mullins, 15; and 2008 graduate Kyle Burkhalter, 19, participated in the project sponsored by the Wahkiakum Community Foundation. Jenny Klinger, 20, a sophomore at the University of Washington and a NHS graduate, was an intern on the project, guiding the students through the process. She also will put together a report for the foundation. Her mother, Debby Denny-Klinger, a teacher at NHS for 31 years, supervised the program.

This is the first year the program was held in the Naselle area. Jenny Klinger said it began in 2005 at Wahkiakum High School. In 2006 it was extended to NHS students where she participated as a then-high school student. "We built a fence to keep cows out of Duck Creek, did stream surveys to see if there were fish and mapped invasive species," she said. In 2007, students from both schools again participated and this year it was based in the west end of Wahkiakum County.

The project supports a $1.4 million Bonneville Power Administration project that the Columbia River Estuary Study Talk Force (CREST) is doing in the area. Funding is provided by the Wahkiakum Community Foundation and one-to-one, in-kind matches with the foundation's partners - CREST, local landowners, the Columbia Land Trust, Hancock Forest Management and the Washington Department of Fish and Wildlife, according to Karen Bertroch, director of the foundation.

"This was a big landmark, the first year we provided funding for Naselle High School," Bertroch said. "The first three years, it was in Wahkiakum County. This year, it's their own projects in their own backyards." She said the students had a "great time together. They're great guys - inquisitive and smart." NHS Superintendent Allen Bennett "really went out of his way on this," she said. "He went out to the sites to watch what the kids were doing. He gets so excited when they get to do something new. This is such a great program. Hands-on learning comes 10 times faster than book learning."

The students' families also were involved, coming to the sites on a special family day to see what their sons were accomplishing.

One of the major focuses of the project was noxious and invasive weeds. "It involved a lot of grunt work," one of the students said. They mapped and dug up yellow irises, Japanese knotweed and English ivy, which are creating severe problems on the streams and rivers in the area. On the Grays River, they canoed and floated on the river, using GPS devices to mark the worst invasions of knotweed, a huge problem, Bertroch said. "We didn't know how big a problem it is," she said. "If we don't get rid of it, the Grays River will become another Naselle River" which is choked with the weed, she said. "It eats everything," she said. "It goes right down the banks of the river. Blackberries are mild compared to this stuff."

"We dug up lots of iris roots, put them into bags and packed them out," Drew Macy said. "It was hard work, very monotonous."

But the hard work and monotony paid off when the students got to go on a camping trip the last week of the project to a "pristine" lake near Mount Adams where they saw an area without invasive species. At the lake, they saw the reason they were working so hard to remove noxious plants from their "backyard." They also saw a large beaver and caught - and ate - some nice trout.

Bertroch said, during their project, the students "went places no one has been for a long time. It's a very effective program. It educates us all."

One of those places was the Kandoll Farm, now owned by Columbia Land Trust, where there are severe problems with invasive weeds. The students worked hard, digging up yellow iris roots, tearing out English ivy and knotweed. They also worked at Secret River, which empties into Grays Bay and Crazy Johnson Creek on Fossil Creek Road, home to major chum runs on the estuary. Conor Smith said they surveyed a cross section of Crazy Johnson Creek on CLT land where a dyke had been breached during the 1999 floods. "We measured what had happened since then," he said.

And, they met John and Gail Gorley, owners of land on Fossil Creek Road, who lost access to portions of their property during the 1999 flood. "They're very nice people," Scalzo said. CREST is planning to "nudge" the Grays River back to its routes before the flood, he said, and they want to build a bridge to the Gorleys can access their property.

They didn't just dig up plants. They planted willow whips along the banks of the rivers to keep the banks from eroding and to provide shelter for fish. "The willow helps the riparian zone and traps woody debris that's important for fish habitat," Scalzo said.

Denny-Klinger said the land trust pays the taxes on the Kandoll Farm land, a big help for the tiny Naselle School District. She said the project she supervised for the first time this year is "the neatest thing. These are country kids. They were exposed to professionals and got ideas about what careers they would pursue. They were an amazing bunch of kids to work with. It was an education for them and for me. I learned too. I've lived here for 31 years and we went places I've never been before."

Students also surveyed land in the areas owned by Hancock Forest Management Inc., and toured an area near Cathlamet, learning about logging practices and the rules about logging near streams, Kyle Mullins said.

The rewards for all the hard work included getting paid - $9 an hour for five 40-hour weeks - and a science credit at Pacific University in Forest Grove, Ore., one of the in-kind matches. Rob Stockhouse, a retired science professor at the university, and director of the program who lives on Puget Island, provided the match. All the students said they will be attending college.

On Saturday, all the students' hard work was condensed into a Power- Point presentation at the school.

Duckworth on whether Washington statues should come down