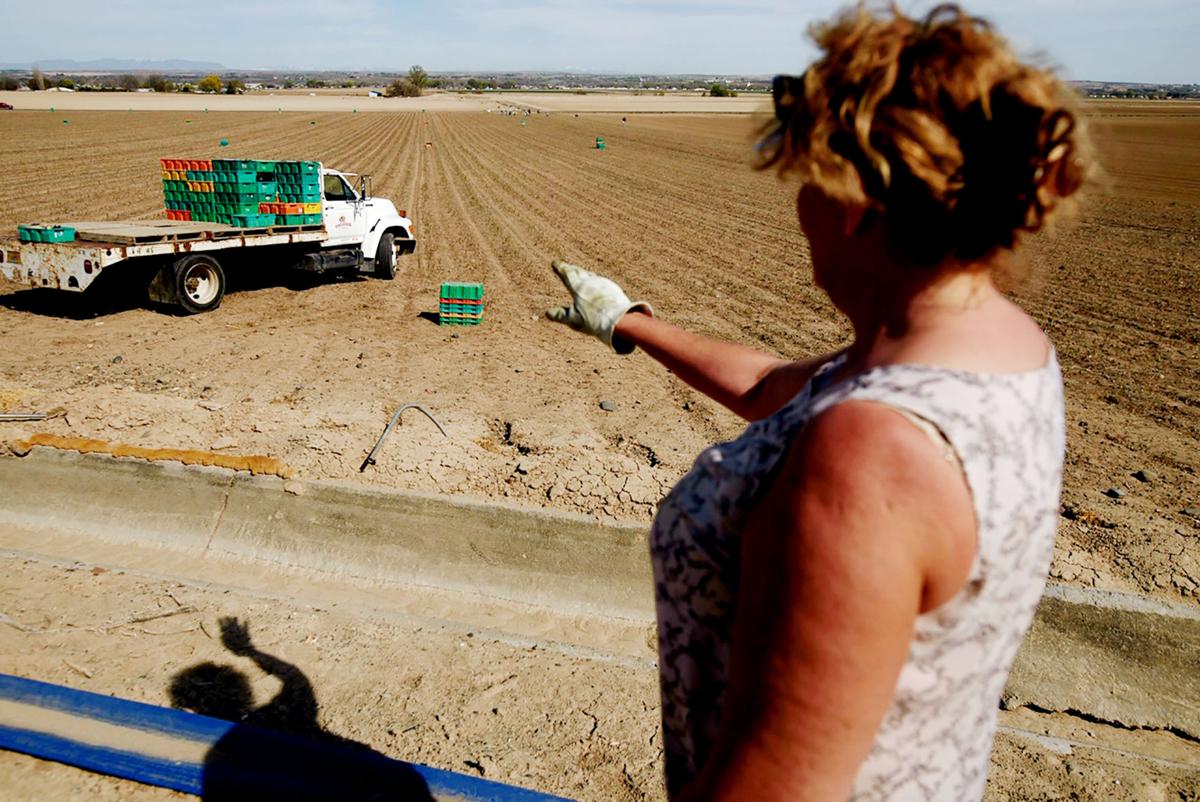 Marcey Clark, a crew leader at Owyhee Produce, gestures toward a field at the family farm straddling the Oregon-Idaho state line. 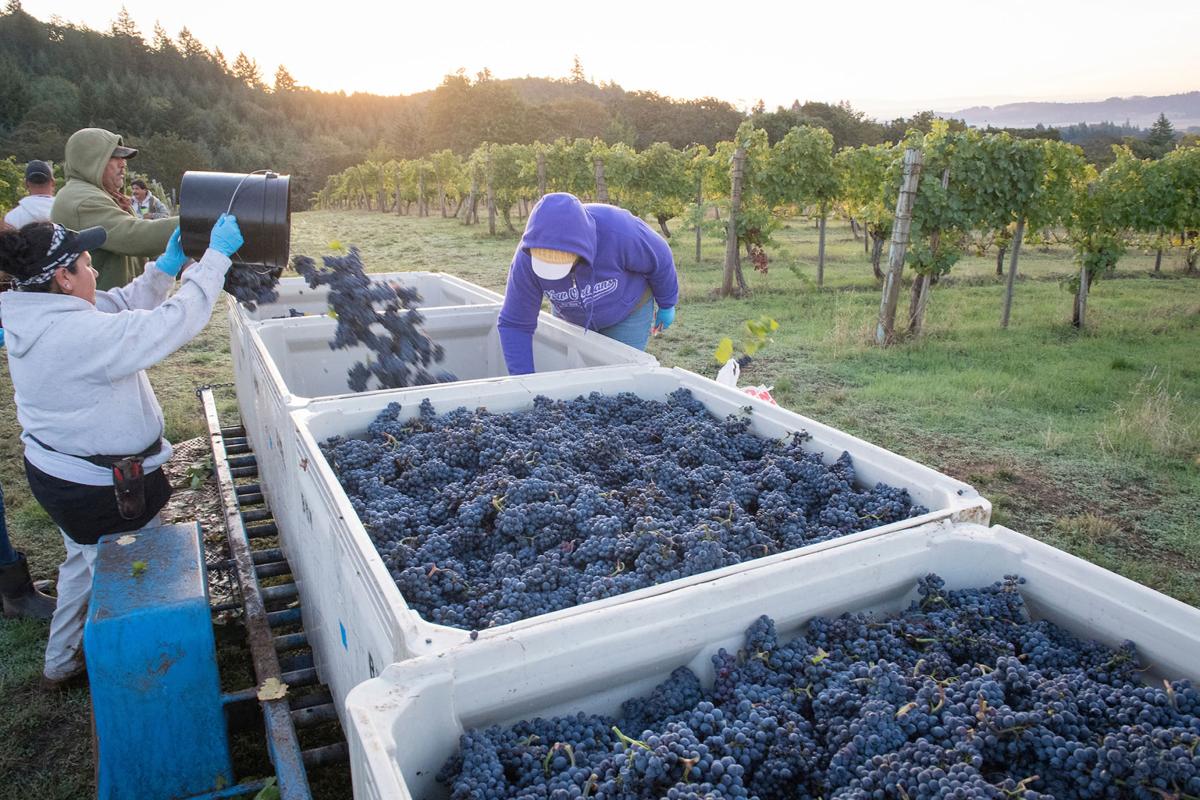 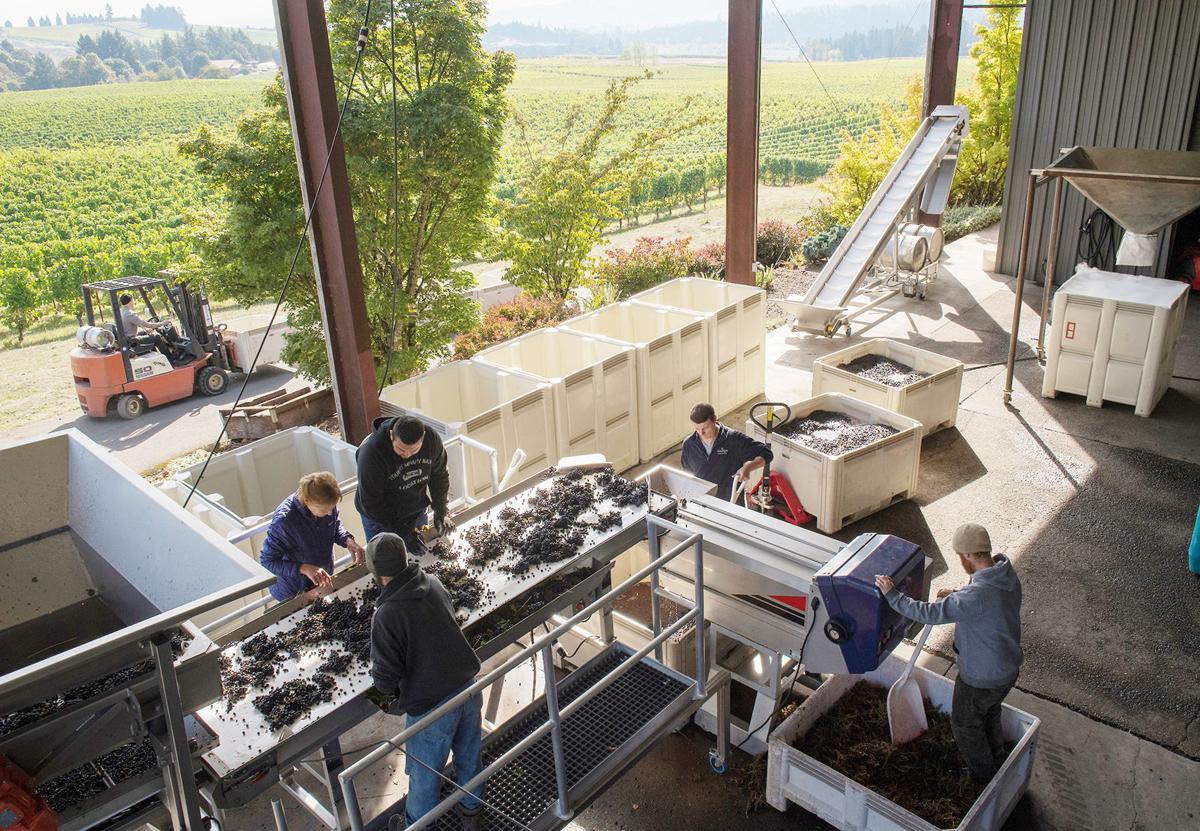 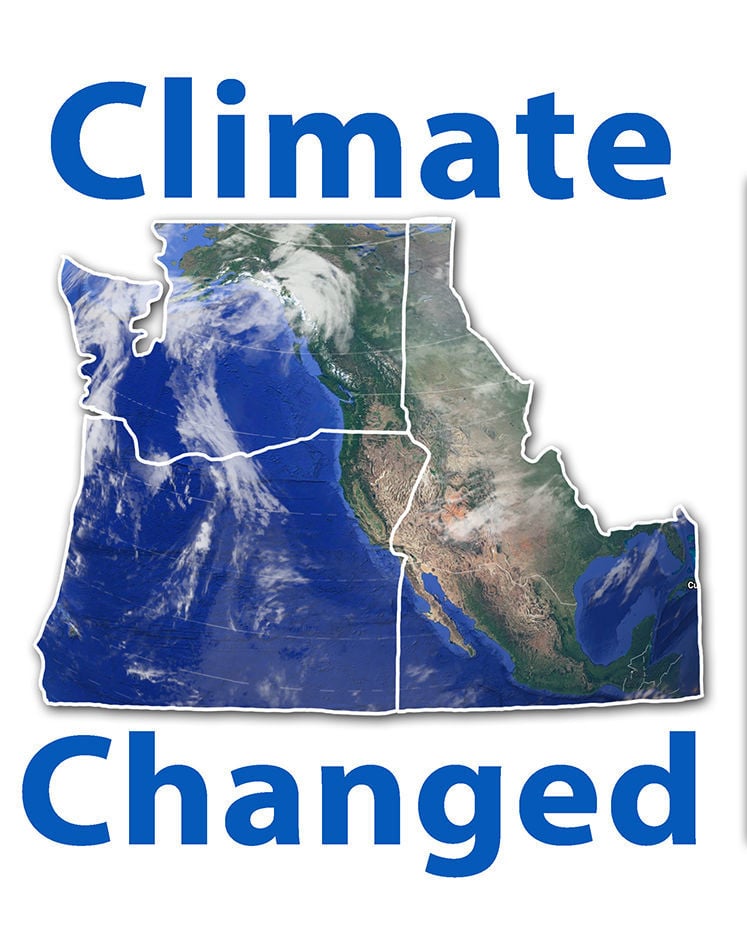 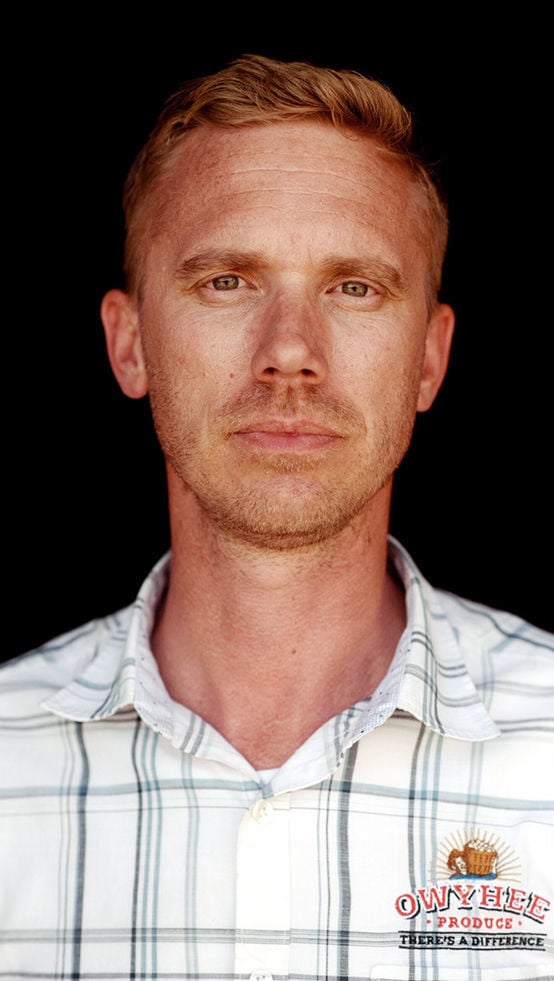 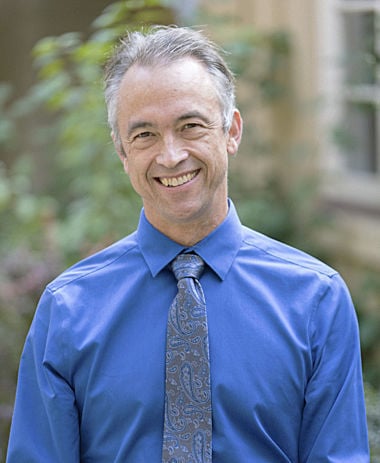 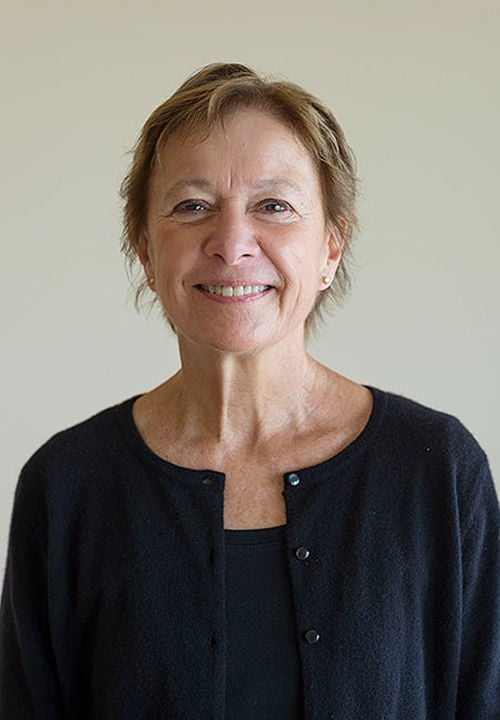 Marcey Clark, a crew leader at Owyhee Produce, gestures toward a field at the family farm straddling the Oregon-Idaho state line.

Pat Dudley and her husband, Ted Casteel, began growing winegrapes more than 40 years ago in the Eola-Amity Hills of Oregon’s lush Willamette Valley.

About 50 miles southwest of Portland, their vineyard lies in the direct path of the Van Duzer Corridor — a low point in the Oregon Coast Range where cool winds from the Pacific Ocean travel inland, creating the perfect climate for producing Pinot noir grapes.

But climate change poses a new challenge for Oregon winemakers and their $200 million industry. Dudley, president of Bethel Heights Vineyard and a former member of the state Board of Agriculture, said the delicate balance of growing conditions may be at risk.

“Everybody is talking about it,” she said. “People are starting to make difficult choices.”

Rising average temperatures are impacting farmers and ranchers across the Northwest, altering growing seasons, threatening water supplies and, in some cases, prompting farmers to change crops or fallow land.

According to the latest USDA Census of Agriculture, the average age of farmers is now 58. Over their lifetime, scientific data reveals a warming trend correlated to an increase in greenhouse gases. Studies are now showing how that will affect everything from precipitation to pest and disease pressure.

Perhaps the biggest consequence of climate change for Western agriculture is decreasing mountain snowpack, which acts as a natural reservoir for streams and rivers that provide fish and wildlife habitat as well as irrigation for crops and livestock.

Philip Mote, who until recently served as director of the Oregon Climate Change Research Institute at Oregon State University, has published several studies charting snow levels at nearly 700 monitoring stations across the West.

The most recent study published in 2018 shows that, compared to 1955, 90% of sites had a snowpack decline. Of those, one in three sites saw “significant” declines. The biggest drops were measured during the spring in parts of West Coast states with typically mild winters.

To put that in perspective, Mote said the volume of water lost by April 1 each year is comparable to the West’s largest reservoir, Lake Mead, which can hold more than 26 million acre-feet of water.

“It was a much larger impact than I expected,” Mote said. “It jumped off the page.”

At the same time, global temperatures have generally risen between 1 and 1.5 degrees Fahrenheit since 1980 and worldwide carbon dioxide emissions from fossil fuels and cement production are up 143.2% since 1970.

Mote is quick to acknowledge that Earth’s climate is naturally variable, though scientific consensus is clear that the current trend is human-caused.

For example, Mote compared the year 2015 — which saw record low snowpacks at 80% of his monitoring sites — to 1934, a similarly warm year in the Northwest. Both years were hotter than average, Mote said, due partly to natural variability. However, 2015 was an additional 2 degrees warmer, a phenomenon Mote attributes to more heat-trapping greenhouse gases in the atmosphere.

Drier, warmer winters in the mountains affect runoff and irrigation supplies in many of the Northwest’s most productive agricultural regions.

Irrigation means everything to Owyhee Produce, a sprawling operation straddling the arid Oregon-Idaho state line where farms typically receive less than 7 inches of rain per year.

Owyhee Produce is the packing and marketing arm of Froerer Farms, a third-generation farm based in Nyssa, Ore. Shay Myers serves as CEO of the operation, growing 4,200 acres of onions, asparagus, beans, corn, mint, wheat, alfalfa and hemp.

“Everything grown is dependent on irrigation,” Myers said, pointing to the desert climate. Here, summer high temperatures can reach 95 degrees. Without the intricate network of irrigation ditches and canals, productive farms become nothing more than sun-baked sand and sage.

Froerer Farms gets its water from the Owyhee Irrigation District, which includes Owyhee Reservoir. The 13,900-acre reservoir provides water to more than 167,000 acres of farmland. At full allotment, farmers receive 4 acre-feet of water per acre of farmland.

However, Myers said lower spring runoff over the last decade has meant less water from the reservoir.

For the first time since his grandfather started the farm in the late 1950s, Myers said the farm had to leave several hundred acres fallow in 2015 and 2016, at a cost of about $400 per acre. Canals that would normally carry water through September instead went dry in August.

“We’ve had less consistent filling of our reservoir, and more fallowing of our ground,” Myers said. “It’s been more exaggerated over the last 5 to 10 years.”

Myers said he expects water supply volatility to continue across the region. In response, he said some farmers have drilled wells as a backup water supply, and switched from flood irrigation to drip irrigation to conserve water.

The warming climate has not been entirely negative for Owyhee Produce. One benefit is a longer growing season. With 30 more days on average between the last frost in spring and the first frost in autumn, the farm has begun growing sweet potatoes, normally a subtropical crop, he said.

“We could see the window of opportunity,” Myers said.

Changes in the length and intensity of the growing season also present new challenges for other Northwest farmers.

Gregory Jones, director of the Evenstad Center for Wine Education at Linfield College in McMinnville, Ore., gave a presentation on climate change at the annual Oregon Wine Symposium in February. He used data from 13 long-term weather stations in agricultural regions around the state to illustrate the warming trend between 1948 and 2015.

The stations — including five in the Willamette Valley, four in the Columbia Basin and six in the Rogue and Umpqua basins of Southern Oregon — show average temperatures during the growing season increased between 2.2 and 2.9 degrees over those 67 years. Each station also saw an additional 5-15 days each year of temperatures above 95 degrees.

The longer the frost-free period, Jones said, the more likely insects can survive through the winter and potentially cause more crop damage.

“You can look at almost any measure of climate — warming, drying, less cold — and find something that could be detrimental,” he said.

A 2019 survey of more than 1,700 wine industry members showed that half of those represented expect climate change will have a strong or very strong effect on their businesses. Jones said growers are especially concerned about water scarcity, lower yields and higher demand for products like pesticides and herbicides.

Bethel Heights Vineyard has about 50 acres of grapevines, primarily Pinot noir and Chardonnay. Dudley said harvest has typically taken place during October in the Willamette Valley.

In hotter years, Dudley said harvest has been pushed forward to August to avoid the wines becoming too “jammy,” referring to wine with a cooked berry sweetness. But that, too, poses a predicament, as picking early might not give grapes enough time for their flavor and acidity to come into balance.

“Every grape has its own preferences,” she said. “It’s all dependent on the climate.”

On the front lines

While agriculture is on the front lines of climate change, growers are also in a unique position to mitigate its effects through farming practices that sequester carbon and build the soil.

“When we speak to policymakers and legislators, that is certainly part of the story we’re telling,” said Chris Schreiner, executive director of Oregon Tilth, a nonprofit organization that certifies organic farms and ranches in 49 states.

A study published in 2017 by the National Soil Project at Northeastern University in Boston found that soils from organic farms had 26% more potential for long-term carbon storage and 13% more organic matter than soils from non-organic farms, based on over 1,000 soil samples taken from nearly all 50 states.

Tabitha Brown, a climate change technical specialist for the American Farmland Trust in Moscow, Idaho, works primarily with dryland wheat farmers on ways to improve their resiliency, especially in low rainfall areas where springs are getting wetter while summers are getting hotter and drier.

“The timing of rainfall is sometimes more important than the amount,” Brown said. “If that rain falls at a different time than it normally does, it can impact yield considerably.”

The Trust’s climate initiative is still a relatively young program, starting 18 months ago in the Pacific Northwest, Brown said. One of the key goals is working with the U.S. Climate Alliance — a coalition of 24 state governors committed to reducing greenhouse gas emissions, including Oregon Gov. Kate Brown, Washington Gov. Jay Inslee and California Gov. Gavin Newsom.

If the alliance can help reduce environmental and cost barriers, Tabitha Brown with the American Farmland Trust said more farms can set themselves up for greater climate resilience in the future.

“In large part, I feel like most producers agree with the principles behind the practices,” she said. “Adapting those practices is really where the challenge lies, and we still have a lot of areas where we could benefit the soil and atmosphere.”