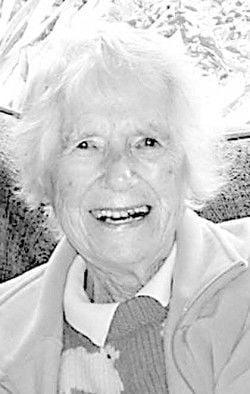 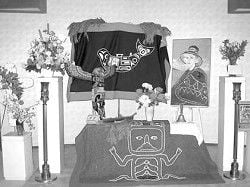 Photo provided A memorial altar at a service for Catherine Herrold Troeh in Burien in July featured several of the traditional Northwest Indian button blankets she made by hand.

Photo provided A memorial altar at a service for Catherine Herrold Troeh in Burien in July featured several of the traditional Northwest Indian button blankets she made by hand.

SEATTLE - Catherine Herrold Troeh died June 28, 2007, at her home in the Seattle suburb of Burien at age 96.

Mrs. Troeh was born Jan. 5, 1911, in Ilwaco, 24 minutes after her identical twin, Charlotte. Both women attended nursing school at St. Vincent Hospital in Portland around the year 1933. Mrs. Troeh later attended University of Washington, where she was awarded a public health degree. Charlotte survives and lived most of her life in Ilwaco. They were the fourth and fifth of the six children of Elfreda and Roy Herrold.

In a forthcoming profile in the Chinook Observer, Mrs. Troeh reminisced about their childhood. "The whole town of Ilwaco was our playground. Our mother opened the door in the morning and said, 'Go!' and we were outside until evening. I guess we must have come home for lunch!"

Mrs. Troeh was proud of their Chinook heritage, tracing her Indian ancestry back to her two times great-grandmother, Marianne (Almavox) Aubichon. "I have a vivid memory of seeing an Indian canoe up in the trees on the bluff," Catherine told the Observer. "I don't know how I knew that we were in a special place - an Indian burial ground. I also remember that when Grandmere Amelia Petit died, the Indians all came from Bay Center and sat cross-legged facing the Presbyterian Church during her funeral."

Involvement in the Chinook tribe and regional Indian issues was to be a lifelong passion of Mrs. Troeh's. According to the Seattle Times, she worked alongside other activists: Pearl Warren; Erna Gunther, an anthropology professor at University of Washington; and her older sister Betsy Trick. Together, they founded the American Indian Women's Service League, which helped spawn the Seattle Indian Center, the Seattle Indian Health Board and the United Indians of All Tribes. In 1952, she was the only woman to join the newly established Chinook Tribal Council.

"Her contribution is immeasurable," Camille Monzon, executive director of Seattle Indian Center, told the Times. "If it wasn't for Catherine Troeh and the other group of women who formed a nucleus, we wouldn't be where we are today. They were not deterred by the naysayers. You can see the fruits of their labor everywhere."

Catherine and her husband Neal purchased the George Johnson House in Ocean Park in 1970 and maintained that home. The Troeh family has turned it into a bed and breakfast, with many Indian artifacts and local artists displayed throughout the home and one room named for the twins - "The Herrold Room" - which has many of their early pictures from Ilwaco.

During her professional career, Mrs. Troeh worked as a nurse in hospitals and at the Seattle Health Department, and she also owned an antique store in Burien.

Mrs. Troeh is survived by her twin sister, Charlotte, her son, Arnold, and her daughter, Charlotte Killian. Her husband died in 1981.

A graveside service is planned at Ilwaco Cemetery at noon on Sunday, Aug. 19.