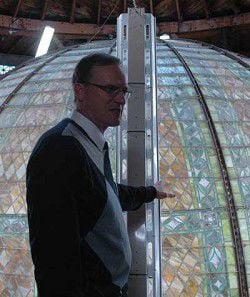 <I>Photos by KEVIN?HEIMBIGNER/Chinook Observer</I><BR>During a tour, County administrator Bryan Harrison explains the restoration of the stained glass dome that was done in 1980 at a cost of $13,000, more than the entire building cost to build 70 years prior to that. 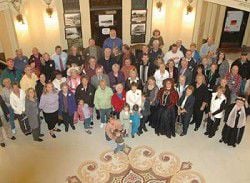 In 1910 a photograph was taken of those celebrating the opening of the Pacific County Courthouse. On Oct. 9, another group photo recorded those who celebrated the historic building's 100th anniversary celebration.

<I>Photos by KEVIN?HEIMBIGNER/Chinook Observer</I><BR>During a tour, County administrator Bryan Harrison explains the restoration of the stained glass dome that was done in 1980 at a cost of $13,000, more than the entire building cost to build 70 years prior to that.

In 1910 a photograph was taken of those celebrating the opening of the Pacific County Courthouse. On Oct. 9, another group photo recorded those who celebrated the historic building's 100th anniversary celebration.

Local historian and author of Pacific County Historical Society's magazine, the Sou'wester, Steve Rogers then quickly corrected Penoyer to the laughter of the crowd of over 50 people. Cuffel and other commissioners were very responsible for a $1.2 million repair of the courthouse last year. County administrator Bryan Harrison pointed out that the commissioners had set aside about half of the restoration's cost and that state funds had paid for the rest of the project.

Washington State Senator Brian Hatfield read a proclamation sent by Brian Baird of the U.S. House of Representatives celebrating the importance of keeping the Courthouse as a valued historical treasure. State Representative Brian Blake was also in attendance and noted his grandfather as being among those on the Pacific County Honor Roll located in the foyer.

For perspective Penoyer said that in 1910 Boy Scouts of America was begun, President Taft threw out the first pitch for the Major League season for the first time, Halley's Comet made a visit, and the first female police officer was hired. He then pointed to one of the many chairs in the rotunda and said even the furniture is original.

Tours were given by courthouse employees and included a rare trip up the steep flight of steps to the third story and stained-glass dome. Harrison gave a detailed explanation of how the wooden structure high above the glass dome for protection was handmade, including the entire wood frame that had to be molded into a circle. He said the courthouse was one of the first to use concrete, but instead of more sturdy quarried sand, there were sea shells in the sand taken from the Long Beach Peninsula.

He explained how the price of copper had literally shot the cost of the 2009 restoration "through the roof" before creative planning by the county leadership and cooperation from the National Historical Society came up with cost-effective blue prints for the project. Harrison told of how the final step was having a glass covering placed over the wooden structure high above the stained glass dome. "There were some tense moments, but fortunately it fit perfectly when the giant crane let it down."

Most of the county's officials were in attendance and as many as 200 well-wishers stopped by for the tours, refreshments, and the ceremony. Facilities maintenance superintendent Randy Wilson received praise from Cuffel for his work "over and above the call of duty" during the dome's water problems a couple of winters ago and for his efforts to beautify the grounds for the celebration.

Later in the afternoon the Navy Band Northwest performed a concert at South Bend High School's Koplitz Gymnasium. Cuffel joked, "One hundred years ago at the dedication there was a picture taken of everyone on the front steps of the courthouse. I'd like another one taken now so I can look back on it 100 years from now."

The photograph was duly taken, but this time inside the rotunda because of a heavy rain and wind storm. As the good old-fashioned sou'wester poured water over the 100-year-old Pacific County Courthouse, everyone and everything in the venerable and functioning building remained safe and dry.

How to win the presidential debate