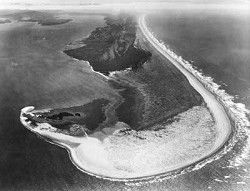 <I>COLUMBIA?PACIFIC?HERITAGE?MUSEUM photo</I><BR>The mouth of the Willapa Bay and Leadbetter Point are seen from the air in 1978. 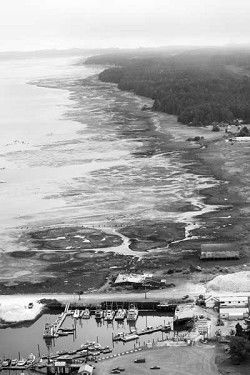 <I>MADDIE?DICKERSON/Chinook Observer</I><BR>The Willapa Bay stretches out from the Port of Peninusla in Nahcotta, as seen from the air.

<I>COLUMBIA?PACIFIC?HERITAGE?MUSEUM photo</I><BR>The mouth of the Willapa Bay and Leadbetter Point are seen from the air in 1978.

<I>MADDIE?DICKERSON/Chinook Observer</I><BR>The Willapa Bay stretches out from the Port of Peninusla in Nahcotta, as seen from the air.

WILLAPA BAY - How many people do you know who are passionate about Willapa Bay? Dick Wilson, president of Bay Center Mariculture Co., is certainly one to put on the top of the list.

"I love the bay. I love my bay," said Wilson, looking out over the Willapa mudflats from the bank of windows in his Bay Center office. "That's why I choose to work and live here."

"The bay is a beautifully functioning system - it's very complex," he adds. "People at its margin can certainly do harm but it's certain types of industry that can do the most harm, and so far local citizens have kept the bay safe from that."

Although regulating the population and development growth around the bay is critical to its health, Wilson feels that much more dangerous is the potential for industrial residues and chemicals that could flow into and be stored in the silts and fine sediments of the bay.

So far, Willapa Bay has been spared the onslaught of these more harmful, persistent chemicals.

Keeping the harvest sustainable Wilson has a long history with the bay. In the 1970s, Wilson - with his wife Janet, brother Dennis and Arnold Shotwell - chose to settle on Willapa Bay to raise salmon and oysters. With a Ph.D. in geology and minors in zoology and ecology, Wilson is a scientist at heart and has a historical knowledge of the bay that few people possess.

"The concept of the sea ranching salmon I still think to this day can be a sustainable business and economical for the area," said Wilson, "but it will take years to change the politics and build that system."

"At Bay Center Mariculture Co., we've been harvesting oysters for several decades," he said. "Willapa Bay produces around 60 percent of the oysters in the state, or better, and probably around 25 percent nationally depending upon the year. That's a big pile of oysters and they're excellent, really high-quality oysters."

"We sell oysters for shucking locally, and we ship two full truckloads a week to California, five dozen oysters in a bag, 50 bags per pallet and 10 pallets in a truck load," he explained. "We have over 100,000 bushel of oysters in the bay for harvest each year - that creates employment and improves the water quality for other species."

People versus Industry "I don't want to minimize the individual contribution to pollution by the residences around the bay. The ground water with the residues humans can contribute - medications, nitrogen, phosphates - must be contained and blocked from the estuarial system," Wilson said.

"But by stringent adherence to the state, and thus county, septic standards, I think a pretty high degree of containment is achieved.

"You can overwhelm an area with people at the margins, like in Puget Sound, for instance, where the biggest problem is not having comprehensive zoning to keep people back away from the shore," he explained.

"However, from what I've seen of our zoning laws, they aren't too bad," he continued. "What the oyster growers have worked on for years is to keep things like fecal coliform levels at a minimum.

"Yes, it's ugly but it isn't that harmful. Fecal matter is organic - it gets used up. It becomes a nutrient. It's just an indication that there are people too close to or in the bay.

"But things that are really harmful are those hard core materials, heavy metals and chemicals like PCBs [polychlorinated biphenyls or manmade hydrocarbons], stuff that gets stored in the sediment from industrial processes."

Geologic time "Even when the South Bend/Raymond area had a much larger population logging and building ships - there were around a dozen mills, numerous whore houses and taverns, it was a big 'urban' area for its times, a real point of commerce," Wilson said.

"But even then, the oysters did fine and no one got sick because there was never a pulp mill, never big industrial waste going into the bay. So we have a relatively clean sediment on the bay bottom today, "he concluded.

Willapa Bay is an estuary, big and shallow. The bay floor is made of layers of sedimentary materials, some newly deposited by the tides or river run-offs and some thousands of years old. This sedimentary layer is in constant motion and in differing states of erosion and deposition while it moves toward the ocean.

When Wilson scans the bay, he sees not only what everyone sees but he is able to look back in time - not decades but even further back into what scientists call "geologic time."

"We can go back to the geologic history of the bay, say 60 million years," he said, setting the scene. "There was no Coastal Range, no Cascades, no Rocky Mountains."

During the Eocene, 60 million years ago, sediments and volcanic material were being deposited into a wide subsiding trough stretching from the Olympics on the north to the Klamath mountains to the south.

"Temperatures were warmer - it was a tropical marine area with swamps to the east to the margin of the Cascades of today. The coal areas in Centralia were formed during this period. I don't know exactly what to compare it to," said Wilson. "Maybe Puerto Rico or another archipelago region."

"Sediments accumulated into this sinking basin, eventually reaching around 10,000 feet - a similar subsidence is happening today in the Gulf of Mexico. Eventually, some tens of millions of years ago, the crust began to rebound and those older sediments uplifted forming the Cascade Range and the Willapa Hills."

The Cascades, which are still forming, are much more recent in time.

The 'ugly' rock of Cape D

"They're ugly igneous rocks, but from their weathering over time nutrients are sloughed off - magnesium, calcium, iron and silica. The weathering of these silicate rocks contribute important mineral for the shells of an algae called diatoms that make up a valuable base of the food chain.

"Sediments store stuff," said Wilson. "They move around and encapsulate nutrients and keep them from washing into the ocean. They can be released into the water column by disturbance such as burrowing critters in the bay."

There are so many propitious factors that came together to form our bay. The older igneous rock that one sees on the Washington side of the Megler-Astoria Bridge also makes up part of Cape Disappointment. This rock, once buried thousands of feet below the current sea level, was included in that uplift that formed other Pacific Northwest peaks.

Wilson explained. "So here you have the Columbia River bringing down all this sand as it cuts through the gorge and it meets the wave energy at sea level and the sand which does not make it to deep water moves north. The hard rock of Cape Disappointment forms a shelter for the sediment, and, over time, the spit of the Long Beach Peninsula was created.

"The Peninsula locked in the waters of Willapa Bay to form the estuary," he said. "If it weren't for Cape D, we wouldn't have a spit or a bay."

EDITOR's NOTE: This series will be concluded in next week's Observer.

'Had to square up with him': Woman describes bear encounter in Alaskan woods

Sanders: 'Not easy' to satisfy every Democrat on infrastructure

Adviser to Iran's Speaker of Parliament: US has constantly lost opportunities