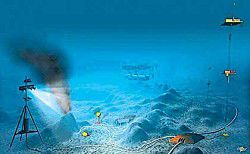 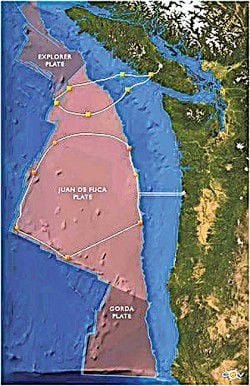 PACIFIC OCEAN - A journey into the unknown has just begun for scientists in the Pacific Northwest, and the ocean off Washington and Oregon will offer clues along the way.

The University of Washington's plans to install an underwater research lab on the submerged tectonic plate just west of the Peninsula received $2.2 million in start-up funds last month.

Within 10 years, a system of cameras and sensors on the seafloor could paint a clearer picture of marine life and ocean systems than the world has ever seen.

Feeding off an elaborate network of fiberoptic infrastructure currently in the design stages, interactive robotic instruments will collect data from the ocean to shed light into a world of physical and scientific darkness.

The resulting ocean observatory would be the first to cover an entire tectonic plate - specifically, the triangular Juan de Fuca plate, which spans a section of the seafloor as large as Oregon, Washington and parts of Montana put together - and send images and measurements ashore to land-based scientists. Later, as part of a larger vision, the Pacific Northwest observatory will link up with similar labs in oceans around the world.

Project leader John Delaney, an oceanographer with the University of Washington, has been advancing the concept of an ocean observatory for 15 years. He said the technology will revolutionize the way scientists study the planet in the same way the first ships and satellites did historically.

"This project is almost the size of spacecraft - it's a fiberoptic network into inner space, and that network will allow us to see and experience different things," Delaney said. "It's like the quote from Marcel Proust: 'Discovery is not so much finding new territory as finding new eyes.' We're providing new eyes."

The observatory's round-the-clock monitoring capabilities would be a first in ocean science, experts say, taking the potential for discovery beyond the reach of traditional tools.

Project leaders expect the lab to deliver new insight to many branches of science. Among the possibilities are:

? Answers to questions on the ocean's role in global warming;

The data would be sent ashore through the Internet in real time, allowing universal public access for anyone with a Web connection.

That means the average Peninsula resident - with little or no scientific background - could log on and see live broadcasts of fish runs swimming by or zoom in on microscopic creatures living on underwater volcanoes. They could check for activity in the subduction zone right off the coast or follow pollution patterns miles out in the Pacific.

"It's not bringing people to the ocean but literally bringing the ocean to people," said Delaney. "It would empower anybody who's willing to take energy to learn how to use it."

Super-charging the seafloorThe underwater research facility will feature four SUV-size power centers, or nodes, connected by more than 850 miles of cable that will send data, video and photographs to shore at the speed of light, via the Internet. Scientists on land can use the power and communication lines to send instructions to the robot-researchers.

John Orcutt, a project leader from the University of California-San Diego, said the concept is groundbreaking and will require more bandwidth than has ever been extended into the ocean.

"One of the really transformative parts of the project is being able to integrate this information in real-time and being able to use it to model the ocean," he said. "It's going to change the way we do oceanography."

Research instruments connected to the nodes will roam the seafloor and water column to deliver a constant stream of measurements of underwater phenomena such as ocean currents, tectonic plate dynamics, volcanic seafloor creation and releases of 700-degree water from volatile spires and chimneys.

With the network in place, scientists won't have to brave the elements in ships and submarines to conduct testing; instead, they can access data from land-based computers.

"We've normally gone out and collected data and put it in on a disk drive," said Orcutt. "Then other people come along and analyze the data for years. They're not doing it in real time; they're doing it years or weeks after the data are collected."

Scientists compete for a partThe power and bandwidth of the ocean observatory and its promise of new, streaming data on the physical, chemical, geological and biological properties of the ocean and seafloor is already attracting scientists of all walks.

Oregon State University scientist Jack Barth studies upwelling of nutrient-rich waters in the ocean, a natural process that forms the base of the marine food chain and ties into fisheries and climate change research.

His goal is to add sensors into the water column inside the observatory to zero in on microorganisms and carbon concentrations. He could also test for oxygen levels that would answer questions about hypoxia, or dead zones in the ocean.

"It's real important because of this idea of climate change," he said. "We want to be able to tell whether changes in the atmosphere are influencing the ocean ecosystem."

The observatory, which will allow for data collection over several decades, "is like a laboratory under the sea," said Barth. "We're hoping to get our instruments into this lab."

"It's a competitive process," said Delaney, who will have to compete himself to conduct specific experiments on plate tectonics even though he's leading the construction phase of the project.

"I see this as changing the way scientists work together," he said. "It's no longer going to be individuals or small groups of scientists going out alone on a ship and collecting data. We'll have to learn new ways of interacting with each other. It will change how the public interacts with scientists and students."

A broad effortRight now, the University of Washington is charged with developing detailed engineering specifications and seeking the needed approvals and permits to clear the way for a six-year construction project to build the facility with $130 million from the National Science Foundation (NSF).

But a much larger consortium of oceanographers in the Joint Oceanographic Institutions has worked to secure the NSF funding for a broad $331 million Ocean Observatories Initiative that reaches across the globe and zeroes in on the West Coast.

The recent congressional approval of NSF funds launched a movement of scientists across the country and the world to make the innovative concept a reality.

Scientists at Oregon State University and the University of California-San Diego have teamed up with the Woods Hole Oceanographic Institution to vie for control of a complementary project focusing just on the West coastline. The group will find out in August if they are the project leaders.

Number of people killed by guns in US continues to rise