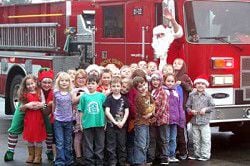 <I>Erin Reilly photos</I><BR>Pacific County Fire District No. 1 delivered Santa to the Boys & Girls Club of the Long Beach Peninsula last Friday. The Secret Santa Society helped provide presents for the kids, some of whom are pictured below. 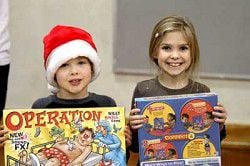 <I>Erin Reilly photos</I><BR>Pacific County Fire District No. 1 delivered Santa to the Boys & Girls Club of the Long Beach Peninsula last Friday. The Secret Santa Society helped provide presents for the kids, some of whom are pictured below.

After a healthy reindeer food snack, the holiday party at Boys & Girls Club was in full swing. Program director Erin Reilly planned and supervised fun activities for each child - building a gingerbread house, playing the snowman toss, and the famous Rudolph Relay. Staff members Sara Morris and Keylin Knutzen joined in this fun day, supervising areas of the party as volunteers participated with the kids.

What is a Christmas party without the real deal Santa? Santa helpers Jason Derrey and Mike Karvia partnered with Pacific County Fire District No. 1 along with South Pacific County Professional Firefighters No. 3999 to give a Christmas gift to each youth. Gifts were provided courtesy of Boys & Girls Club of the Long Beach Peninsula's newly formed "Secret Santa Society," led by community member Rita Nicely.

What it all comes down to is our kids and making sure they had a great send off. That is why Boys &?Girls Club is here. One child received a fun game that required batteries from Santa, but his family couldn't afford them. His sad face turned to joy as the batteries arrived. A couple of favorite kids' quotes from the executive director's file were by a 7-year-old boy, who said "This is the best Christmas party I have ever been at!" and a very sage 10-year-old girl who said in her most grown up wise voice, "That fake Santa seemed more real to me than any other I met. He was good, so good I could believe in Santa Claus again after meeting him!"

This will be a brighter, happier, and better Christmas for many of our community's youth due to the efforts of the staff, the volunteers, the Santa Helpers and the Secret Santa Society!