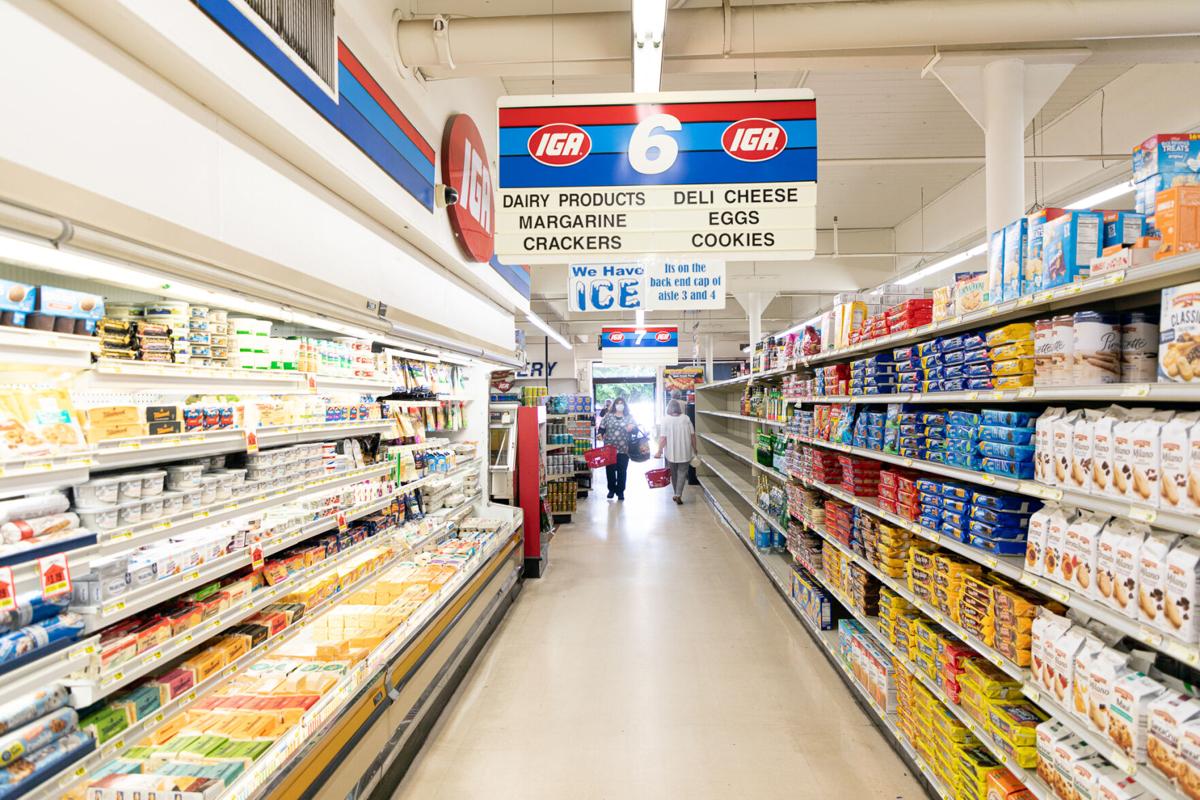 New owners are planning to add as much as 10,000 products to store shelves at Sid’s Market in Seaview. Currently the store has about 25,000. The store is relocating some items to make rooms for an expanded line of natural, organic and gluten-free options. 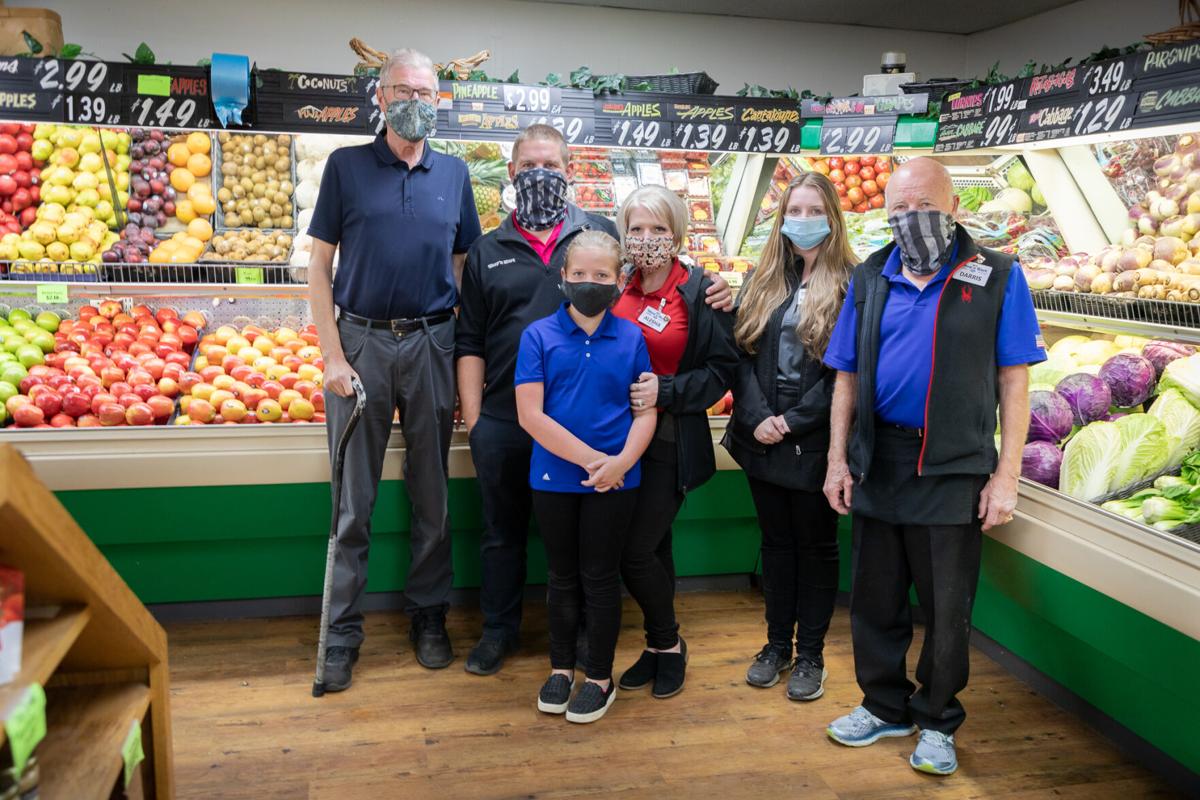 Left to right: Sid Snyder Jr., Garet Russo, general manager; Alesha McDaniel, CEO; Kaitlynn O’Neil, store director; Darris McDaniel, owner, and Lilly Russo pose for a photo in front of the produce section on Wednesday, Oct. 14 at Sid’s Market in Seaview. Sid Snyder Jr. said that he couldn’t be more pleased and that the McDaniels were his ‘first choice’. 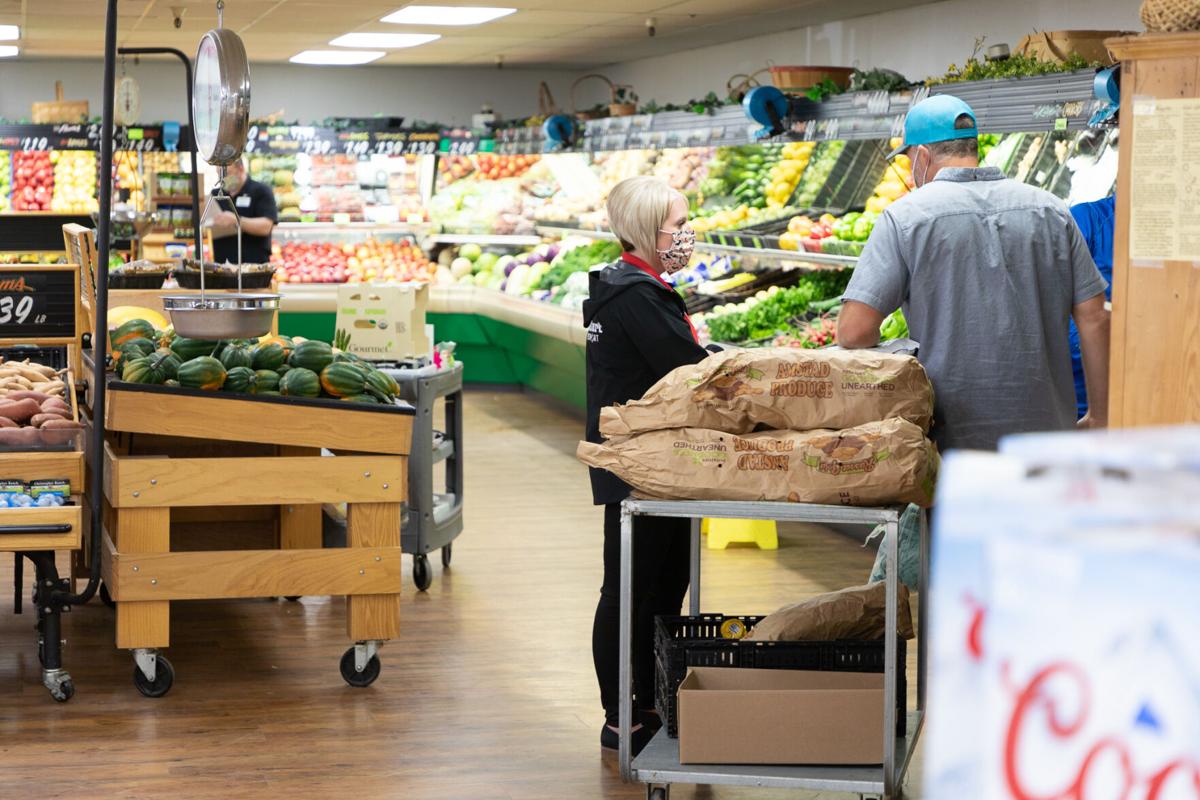 CEO Alesha McDaniel speaks with a delivery driver in the produce department on Wednesday, Oct. 14 at Sid’s Market in Seaview. “With groceries we pull from a couple major wholesalers, which gives us a little more variety and selection, instead of just having one,” Alesha said. 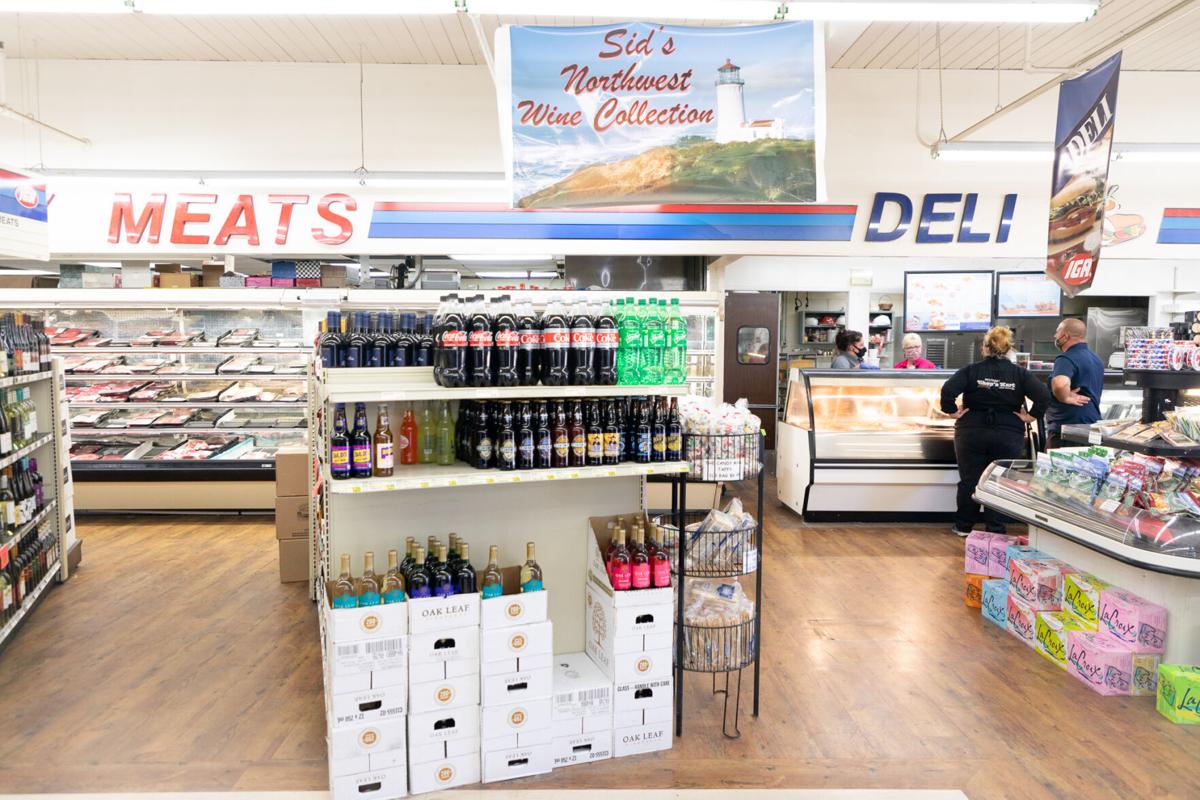 More space could be added to the meat counter as the antiquated bakery department is reconfigured. 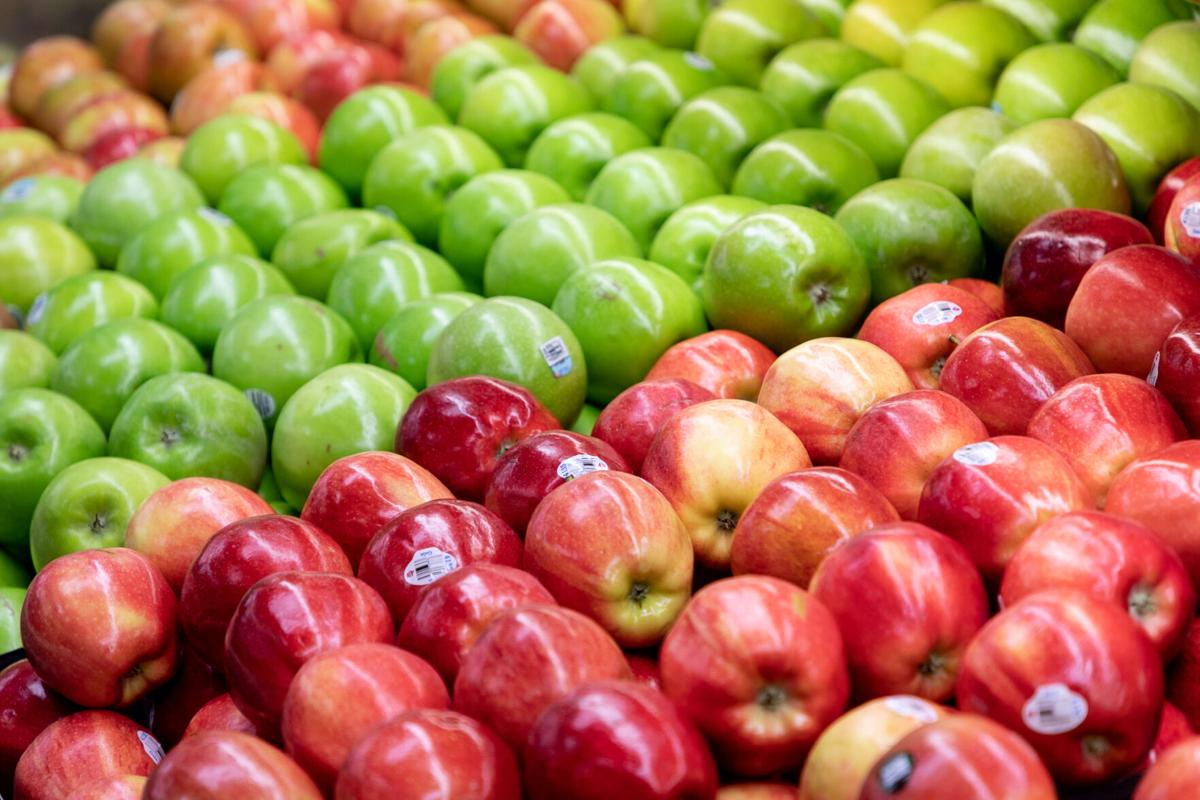 The new owners are expanding the produce department to include more natural and organic offerings.

There will be some new faces inside Sid’s Market with the transition to new ownership. Pictured left to right are Darris McDaniel, owner; Kaitlynn O’Neil, store director; Alesha McDaniel, CEO; Garet Russo, general manager and daughter Lilly Russo on Wednesday, Oct. 14 at Sid’s Market in Seaview. The market will retain the name but will be undergoing several changes inside over the coming weeks.

SEAVIEW — Change has come to a legendary community grocery store.

Sid’s Market in Seaview, owned by the Snyder family since 1953, officially changed ownership with new purchaser Darris McDaniel earlier in the month.

The Sid’s Market grocery flier inserted in the Oct. 21 Chinook Observer was scheduled by the previous owners. We were unable to remove it in time for this edition. Product availability and prices advertised in it are no longer valid, so please discard it. Watch future editions of the Observer for real bargains on quality products at your new Sid’s Market.

McDaniel, 77, who operates Shop’n Kart market in Westport and Shop’n Kart Fuller’s Market Place in Centralia, has long known the Snyder family, including Sid Jr., who has run the store for the past decade.

“I appreciate Sid, his wife Robin and Chuck [Winn, the store’s long-time manager]. They’ve been very helpful in this transition,” McDaniel said Oct. 14.

“Sid Snyder Sr. was well respected in the whole state and we’ve known Sid Jr. for a long time. It’s staying as Sid’s,” McDaniel said of his decision to retain the store’s heritage name. Sid Sr. was majority leader of the Washington State Senate and a hero of local civic life for decades.

While the market will retain the original name, ambitious changes have already begun inside the store, starting last week. On Oct. 14 bread and produce trucks began arriving intermittently while department managers delegated deliveries inside and electricians worked overhead.

“The only changes will be inside the store. We’re upgrading and adding another 10,000 items, at least. We’re going to have a full line of natural and organic products. We’re adding approximately 36 feet of hardware, including everything you need for clamming,” McDaniel said.

“The produce was probably the weakest, because there was only one company [supplier]. We’ll now deal with four because of our buying power we can bring more supply and selection,” McDaniel said.

“With groceries we pull from a couple major wholesalers, which gives us a little more variety and selection, instead of just having one,” added CEO Alesha McDaniel.

This will mean more choice and lower prices for customers, including more natural, organic and gluten-free options. The market will continue to fine tune product offerings based on suggestions from shoppers.

“We’ll be adding a full line of Hispanic products. In our other stores there’s a lot of need for Russian and Ukrainian, which we’ll add if there’s a need,” Darris McDaniel said. “Our goal is to supply to every customer what they want.”

Customers will eventually see lower prices on common staples such as bread, milk and eggs.

“The basic groceries will be a lower price. Everything we can buy in truckloads is a much cheaper bracket. We buy cheaper and we pass that along,” McDaniel said.

The market will be buoyed by two warehouses covering a combined 18,000 square feet to help keep store shelves stocked for anticipated holiday and weekend crowds.

“A short-term goal is to get more inventory in here. We want to have head storage in each aisle, so on strong weekends and we run short we’ll have extra product,” McDaniel said.

The liquor, pop and potato chips have found new store locations so far, part of an on-going inventory optimization with help from smarter checkout stands.

“The new checkout stands will be faster and more efficient. They will allow us to take readings from items that determine how slow or fast they’re moving. It will help allocate space,” McDaniel said.

“We can do better allocations based on readings with our point of sale person. For example, if we only sell 12 bottles of something per year but have three rows of it, we can cut it back to one row to allow more room for new items. The technology really helps.”

“We will expand the hours,” he said. “This community does a hell of a job promoting all kinds of events. When this town is full of people, we’ll be open until midnight. Our hours at some point will be 6 a.m. to 10 p.m.” Special seniors-only hours will be added after more staff is hired. A 24-hour self-service ice machine will also be added outside.

Covid-related shortages are still impacting supply on some items.

“Right now, we still can’t get canning jars or canned spinach. There’s also a tightening of the fresh spinach in our produce department,” McDaniel said.

The same commitment to community that the Snyder family started will endure, McDaniel said.

“Starting in November we will have holiday meal deals for $25 that can feed 8 to 10 people. I just talked with the police chief this morning about a program that starts around Thanksgiving where we give gift certificates to the police and if they stop someone in need, they’ll give them a gift certificate,” McDaniel said.

The store will embrace seasonal events and hold fun contests, including an ‘Ugly Sweater’ competition in December and sponsor an annual ‘biggest Chinook’ fishing contest, with thousands going to the winner.

And the McDaniels don’t plan to do it alone. The former staff of 15 at is expected to eventually double in size.

“We will be hiring more people. We need approximately 15 more. If they want a job, we’ll find a spot for them,” McDaniel said.

He works in a Covid-19 unit in a parking garage. Trump called it fake