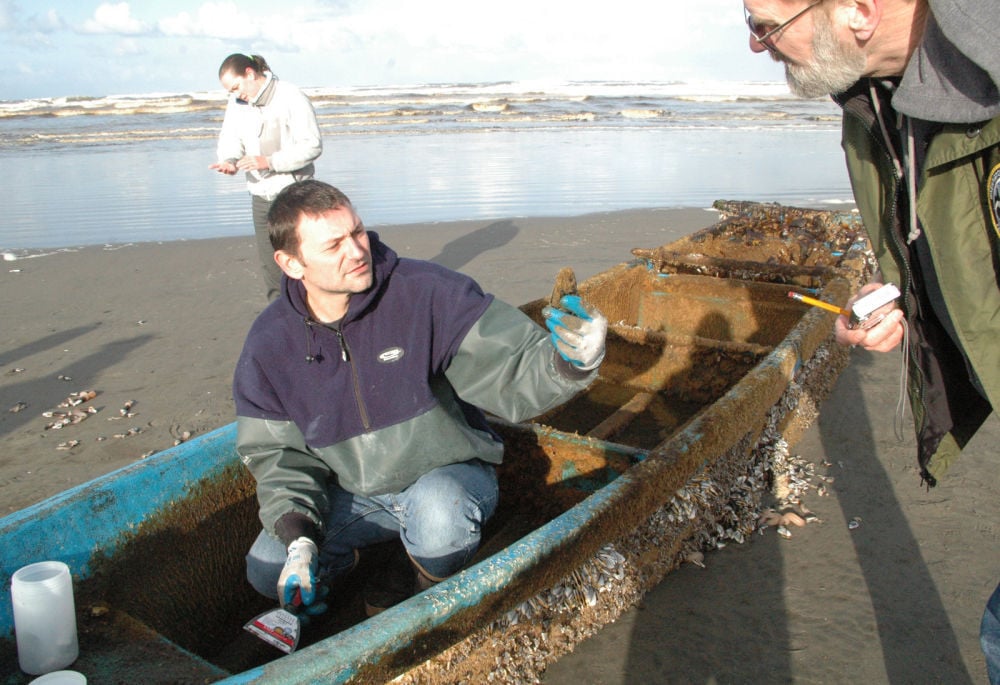 <p>Leanna Reuss of AmeriCorps, Travis Haring and Bruce Kauffman of Willapa Bay Shellfish Lab examine a small boat that appears to have been swept to sea by the Japanese tsunami.</p> 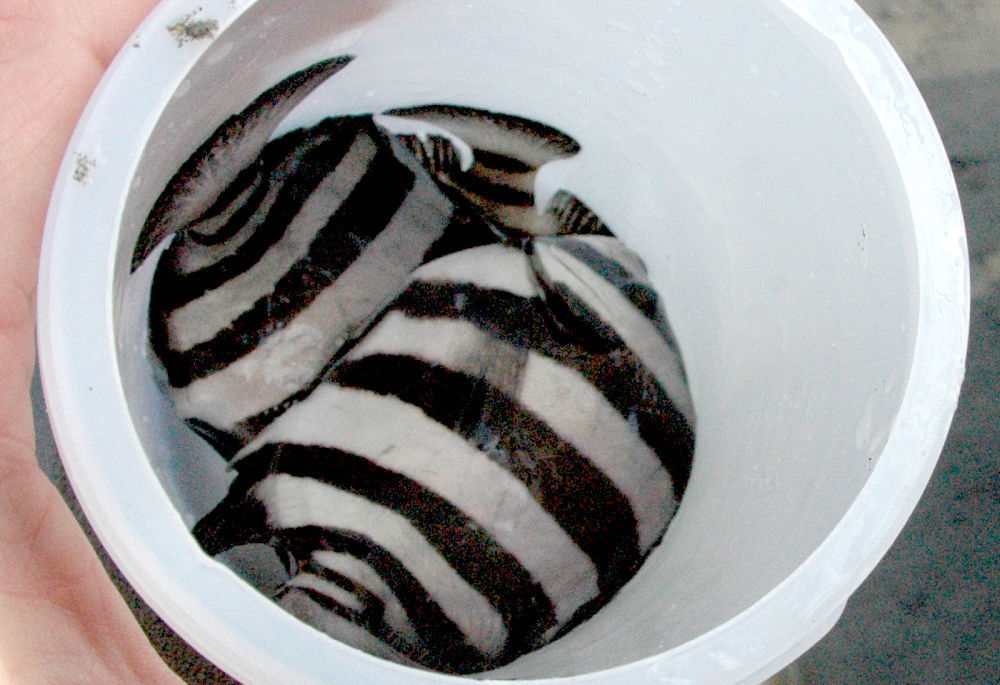 <p>These were three of the four live fish retrieved from the Oriental boat that washed ashore in Long Beach March 22.</p> 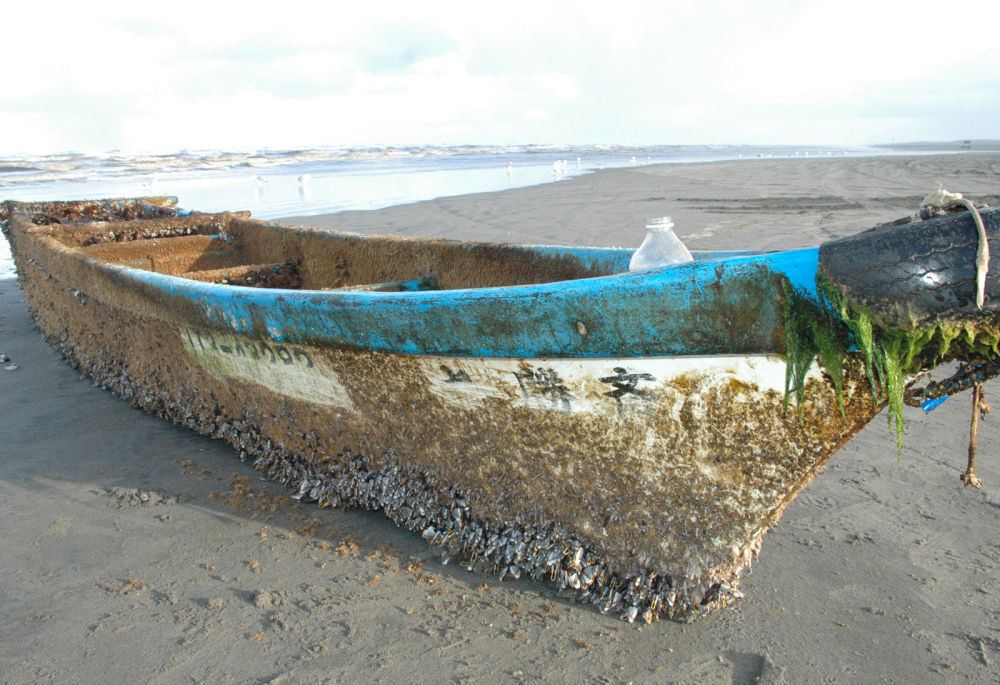 <p>A small boat that washed ashore in Long Beach Friday displays a registration number from the area of Japan struck by the tsunami.</p>

<p>Leanna Reuss of AmeriCorps, Travis Haring and Bruce Kauffman of Willapa Bay Shellfish Lab examine a small boat that appears to have been swept to sea by the Japanese tsunami.</p>

<p>These were three of the four live fish retrieved from the Oriental boat that washed ashore in Long Beach March 22.</p>

<p>A small boat that washed ashore in Long Beach Friday displays a registration number from the area of Japan struck by the tsunami.</p>

The three-foot wide boat had the number IT3-43282 on the side. “IT3” is a common boat registration prefix in the area of Japan hit by the tsunami, as pointed out by Observer reader David Hathaway, Naselle High School Class of 1985, who cites this resource from the Japanese Coast Guard: www.bit.ly/eNh44K.

It was first reported by Mike Hoyt about 100 yards north of Sid Snyder Drive off the coast of Long Beach. Bruce Kauffman and Travis Haring, biologists from the Washington State Department of Fish and Wildlife Nahcotta Shellfish Lab began taking samples from the boat at about 8:30 a.m.

Leanna Reuss from AmeriCorps helped with the process. Four live fish were taken from the fish well in the stern of the boat. Large mussels and gooseneck barnacles were also found on the vessel, as well as at least one sponge. Other samples of marine life were taken by the biologists.

Federal agencies also responded to the boats arrival, according to a statement Friday from the Washington Marine Debris Task Force. No oil or hazardous materials were associated with the boat.

Finding live fish on the boat was quite a surprise, Allen Pleus, Washington Department of Fish and Wildlife invasive species coordinator, stated. He identified the fish as barred knife jaws which are typically found feeding on flotsam in the Western Pacific Ocean. There were several types of crab native to ocean waters off the coasts of Japan, Korea and Taiwan.

This boat is very rich in different species. The boat that came ashore in June 2012 had about 30 species, with about 90 percent of the bio-mass being gooseneck barnacles, Pleus explained. He said there were about 70 species on the dock that washed ashore in northern Washington and Pleus figures that there will be somewhere between 30 and 70 species on this boat.

One of the barred knife jaw fish was taken to Long Beach City Hall and eventually found a safe home at the Seaside Aquarium. The name of the boat is Sai-Shou-Maru and as yet no one has claimed it. The boat is at Cape Disappointment State Park.

It will take some time to identify all of the samples. We will look at the ear bones of the barred knife jaws to see how old they were and get an idea if they were alive in the boat for two years, Pleus said.

Japan was inundated with an earthquake and tsunami March 11, 2011. Other tsunami items that have washed ashore in Washington include buoys, bits of Styrofoam, small appliances, plastic, crates, refrigerators and even a soccer ball.

In addition to State Parks and DFW, agencies coordinating in the response are the Pacific County Department of Emergency Management; the Emergency Management Division of the Washington Military Department; and the National Oceanic and Atmospheric Administration (NOAA). The multiple agency effort is focused on coordinating any actions that might be necessary to protect public health, safety and the environment, and on working with the Consulate-General of Japan in Seattle to confirm whether the boat came from Japan and to locate its owner.

'Have to laugh to keep from crying': Business owner struggling amid pandemic