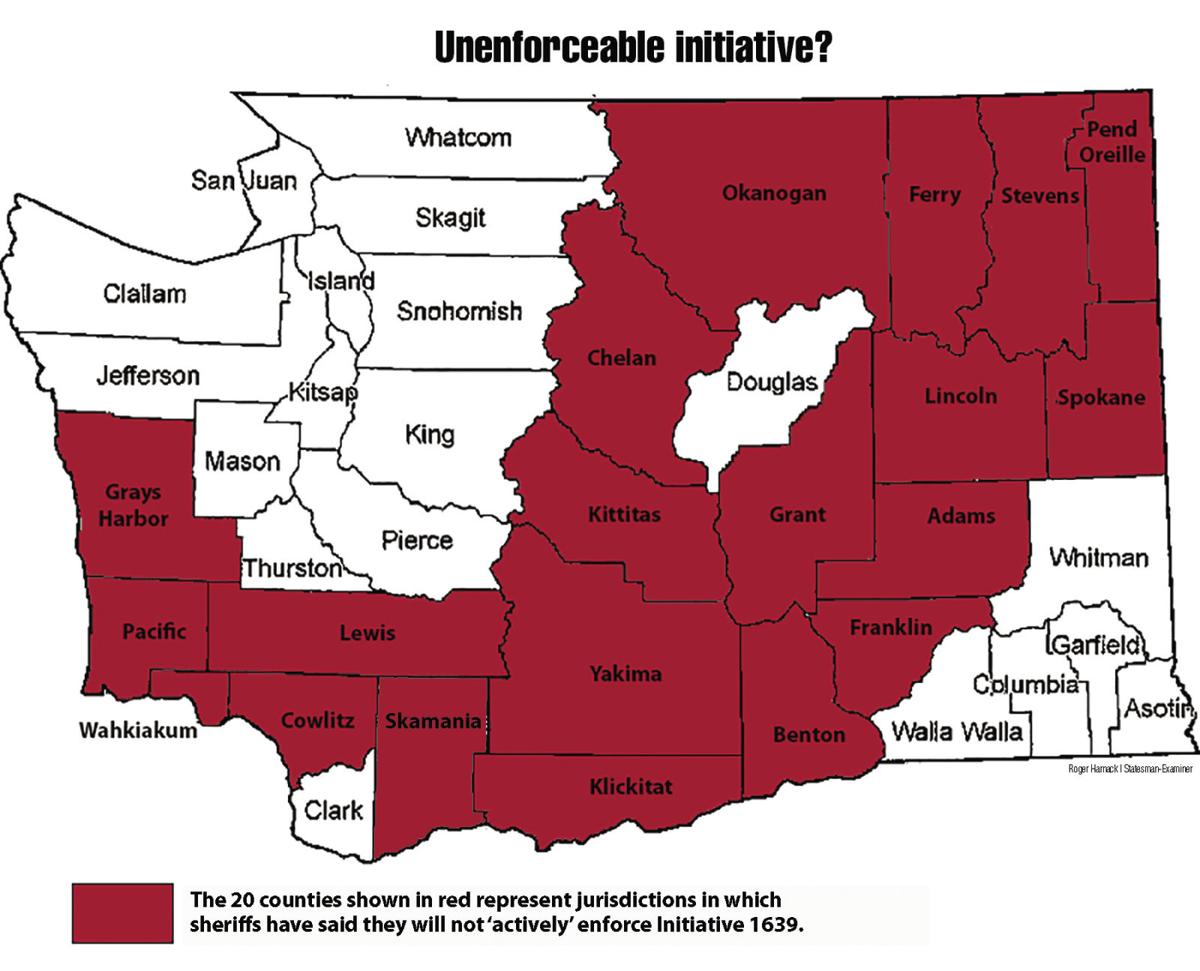 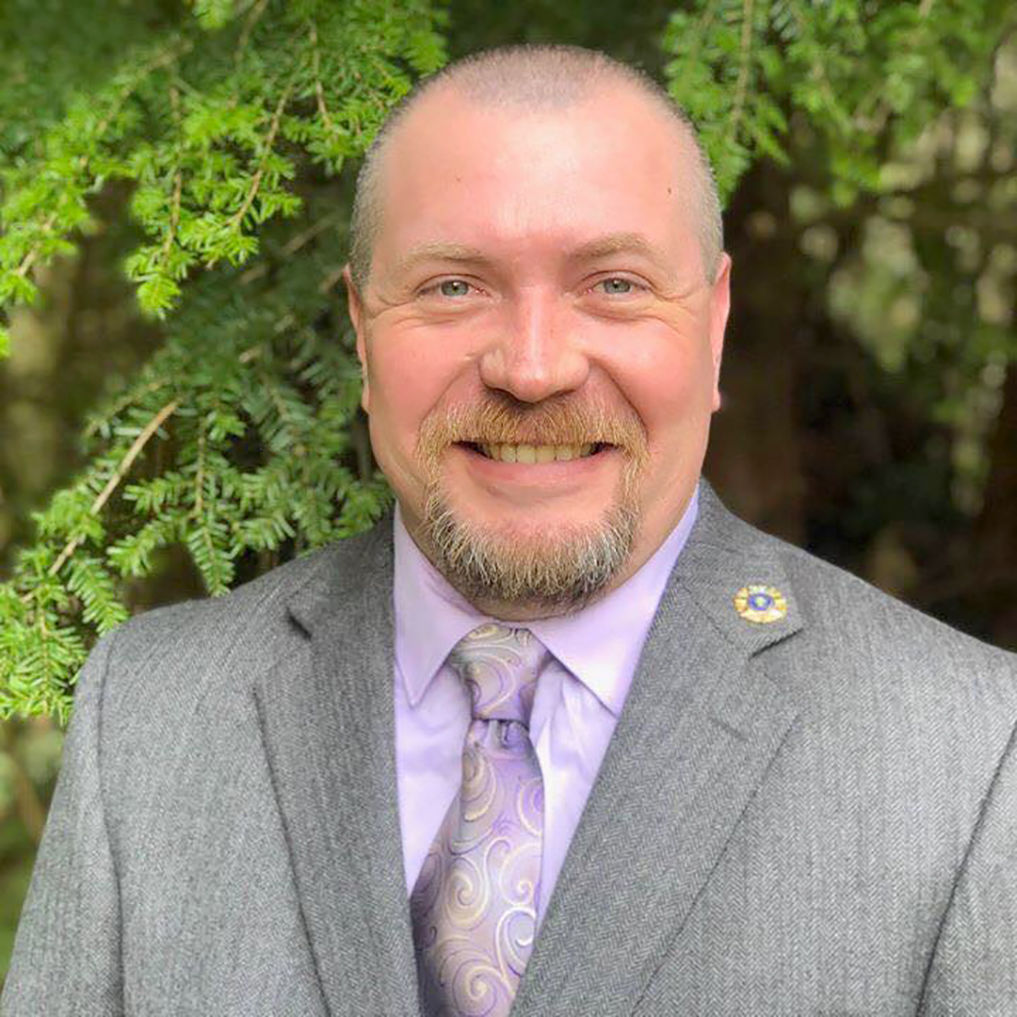 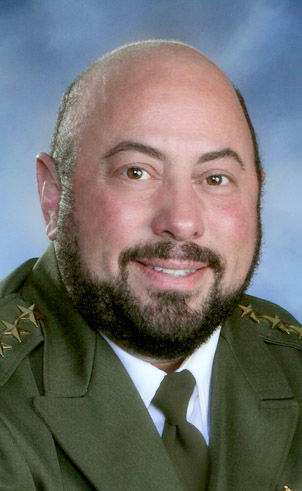 The number of Washington law enforcement and government leaders balking at upholding gun-control measures approved by voters in November, is growing.

Citing U.S. and state constitutional concerns, Pacific County Sheriff Robin Souvenir in a Feb. 1 press release said, “The Pacific County Sheriff’s Office will continue to investigate all complaints we receive from our community members but until the legality of Initiative 1639 is resolved by the courts these initiative matters will be documented only.”

In northeastern Washington, Stevens County Sheriff Brad Manke said his deputies will not actively seek out violators unless there is an imminent threat to public safety.

“I took an oath to defend the Constitution and uphold the laws of the state of Washington, so I don’t feel I can say I will not enforce a law under any circumstances,” he said. “However, it would have to be a pretty extreme circumstance for us to ever make a custodial arrest for a violation.

“As a sheriff, you have a lot of discretion and I will say that we are going to respect the Second Amendment.”

Initiative-1639 passed with more than 60 percent of the vote, with the majority of “yes” votes coming from heavily populated, more urban counties west of the Cascades, while voters on the east side of the state mostly gave it a thumbs down.

The measure raises the minimum age for adults to buy a semi-automatic rifle from 18 to 21, redefines semi-automatic rifles as “assault rifles” and mandates safety classes for purchases. In addition, it requires firearms dealers to sell trigger locks and gun safes and prevents them from selling to out-of-state residents. The law would also make firearm owners criminally liable if their guns were involved in any criminal incidents, even if the weapons were stolen.

The measure is being challenged for its constitutionality in U.S. District Court by the Second Amendment Foundation as well as the National Rifle Association.

Manke said he opposed I-1639 and is hopeful the NRA-led challenge will ultimately prevail.

“When my 19-year-old daughter can’t carry a .22 rifle off our property but we can send her off to war — I don’t agree with that at all,” he said.

Manke concedes there could be huge liabilities for jurisdictions refusing to enforce the law altogether if an underage subject uses a gun for a violent crime and authorities knew about weapons access and failed to act.

A motion to dismiss the NRA suit was filed by state Attorney General Bob Ferguson and Safe Schools Safe Communities, the leading proponents of I-1693; it will be heard Feb. 15.

“We are aware of this situation and are actively monitoring developments as they occur. Attorney General Ferguson has been clear that he is committed to protecting the legal and constitutional rights of Washingtonians, and upholding the will of the state’s voters in passing I-1639.”

At least 20 county sheriffs statewide have said they would not “actively” enforce the measure.

She said the AG’s office was confident I-1639 would be found constitutional. She referred people wanting further information to http://www.atg.wa.gov/initiative-1639.

Pend Orielle Sheriff Glenn Blakeslee shares Manke’s views and they are working with other authorities on the east side to consolidate concerns about “nonspecific and vague” language in I-1639 that is open to interpretation.

They plan to ask the Legislature to further define the issues they identify.

After doing research, he learned that the definition of “assault rifle” in the measure is more restrictive than even than that of the United Nations and California.

“It’s much too broad for my comfort,” he said. “This definition could end up being applied to every semi-automatic handgun or shotgun.” He said the requirements for storage are also too vague and could be interpreted differently by someone on the west side of the state than on the east.

“I want my citizens to have guns accessible where they can get to them in an emergency. I don’t like this law and I’m going to use a lot of discretion when enforcing it,” he said.

Existing state law provides exemptions for underage possession of a firearm, such as target shooting and hunting, Blakeslee said.

He is going to follow those regulations and believes that will be important given that I-1639 does not specify whether guns already purchased by 18 to 20 years old are “grandfathered” and legal.

“We are going to rely heavily on those exemptions,” he said.

Howie said in a release Feb. 12, “With nearly three decades of law enforcement experience, I have never refused to enforce a law in this state. And I will continue to enforce the laws. However, when a law is passed that is in direct conflict with each and everyone’s constitutional rights, I have an obligation to step back and take a harder look.”

Okanogan County Sheriff Tony Hawley said I-1639 has the potential to “re-victimize victims.”

“If someone has guns stolen and then we prosecute them for not storing them correctly, we are re-victimizing that individual,” he said.

“I don’t like this law. My interpretation of I-1639 is that the language is so contradictory it’s unenforceable. Until that’s cleared up, we will do an investigation and document our findings and then turn them over to the prosecutor.”

Stevens County Commission Vice Chairman Steve Parker said a proclamation is being drafted by the elected body in opposition of the new gun control laws.

A proclamation is a statement of principal, as opposed to an ordinance, which is local law, or a resolution, a legislative stance, he said.

The commission has taken time to research statements made by other counties, such as Franklin County’s resolution announcing that its officials don’t want the new laws enforced within their jurisdiction. Cowlitz County has also passed a resolution opposing the implementation of I-1639.

Stevens County Prosecuting Attorney Tim Rasmussen pointed out the Second Amendment says, “The right of the people to keep and bear arms shall not be infringed” so there should be no law telling people how to handle firearms in their own homes.

“People have a right to protect themselves,” he said. “I support efforts to reduce gun violence but not to the extent of depriving people of their constitutional rights.”

Rasmussen believes portions of I-1639 will be found unconstitutional.

“The portion that holds a gun owner accountable for actions of other people I do not believe will stand judicial scrutiny,” he said.

Like Manke, Rasmussen said an 18-year-old who is eligible to serve in the military should not be prohibited from gun ownership.

He said many young people in Washington are taught by their parents how to safely handle guns and that is “family business and the government should not tell families how to conduct themselves.”

All prosecution is based on a case-by-case analysis, said Rasmussen, which considers the facts and the application of the law.

For that reason, he said he could not predict his response to any hypothetical situation that could arise under I-1639 laws.

Parker believes I-1639 was approved because too many voters have not been educated about how their constitutional rights play a vital role in protecting their personal liberties.

“We need to call out any law that violates the constitution,” he said.

That’s exactly what Republic Police Chief Loren Culp said he is doing by refusing to enforce laws that violate the Constitution.

Skamania County Sheriff Dave Brown said he believes the law is unconstitutional and will wait for the courts to decide the issue before starting enforcement.

“I did not personally support this initiative but I follow the rule of law,” he said.

Spokane County Sheriff Ozzie Knezovich issued a statement against I-1639 last week and said he offered to join the opposition lawsuit, although sheriffs have no standing to become a party.

He said there is nothing to enforce at this time and, until the day there is, “I’ll evaluate it and if it is against the Constitutions of the state of Washington or that of the United States, I will stand against it.”

Ferry County Sheriff Raymond Maycumber said he would not enforce provisions of the law that he believes are unconstitutional.

“As a person who has spent most of my adult life in service to our system of justice, I must have faith that the courts will fairly try and lawfully apply due process to the constitutionality of this initiative and find it lacking, as I do,” he said.

Some gun shop owners, such Matt Cieslar of Talos Tactical in West Richland, have joined the rebellion by continuing to sell semi-automatic rifles to adults ages 18-20.

Cieslar says there is a loophole in the law, that the definition of “assault rifle” will be determined and implemented July 1.

All but two counties — Spokane and Whitman counties — in favor were in Western Washington.

While Spokane approved the measure with 51.1 percent of the vote, Stevens County rejected it by 72.1 percent.

In Pacific County, 6,034 voters rejected the initiative and 4,897 supported it.

Voters in Ferry County where Republic is located, opposed I-1639 by a nearly 80 percent margin.

No law approved by a state can supersede the rights protected in the U.S. Constitution, Culp said.

“The supreme law of the land is the constitution and that’s the law I uphold,” he said.

His bid to have Republic declared a “sanctuary city” for Second Amendment rights is on hold pending further research by the city council, which he said is strongly supportive of his stand, as are local citizens.

“When officers graduate from the academy they are certified by the state as peace officers, not law enforcement officers,” Culp said. “So, the argument that we have to enforce a law that doesn’t keep the peace doesn’t hold water.”

He said the Legislature is considering more gun control laws and it’s time for authorities and citizens alike to stand up and be counted or they will lose their Second Amendment rights.

“It will keep happening until enough police chiefs and sheriffs stand up against it,” he said.