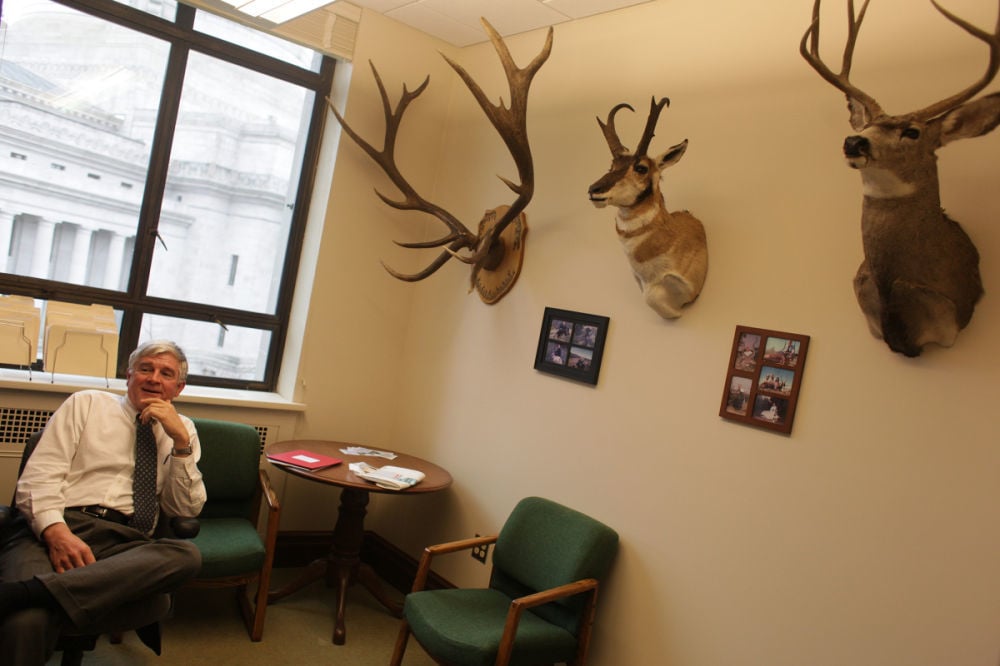 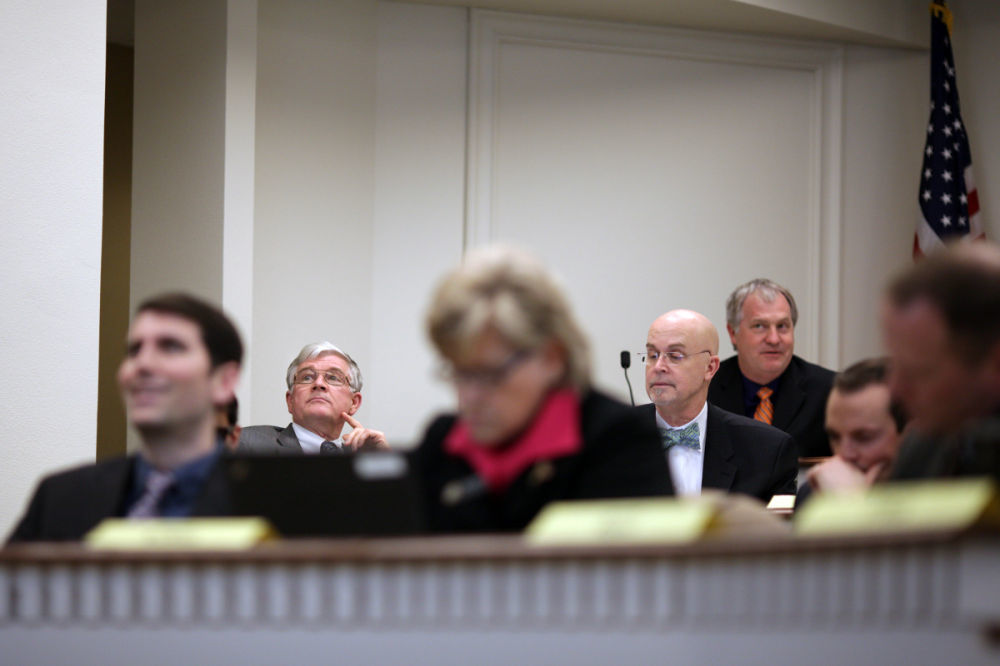 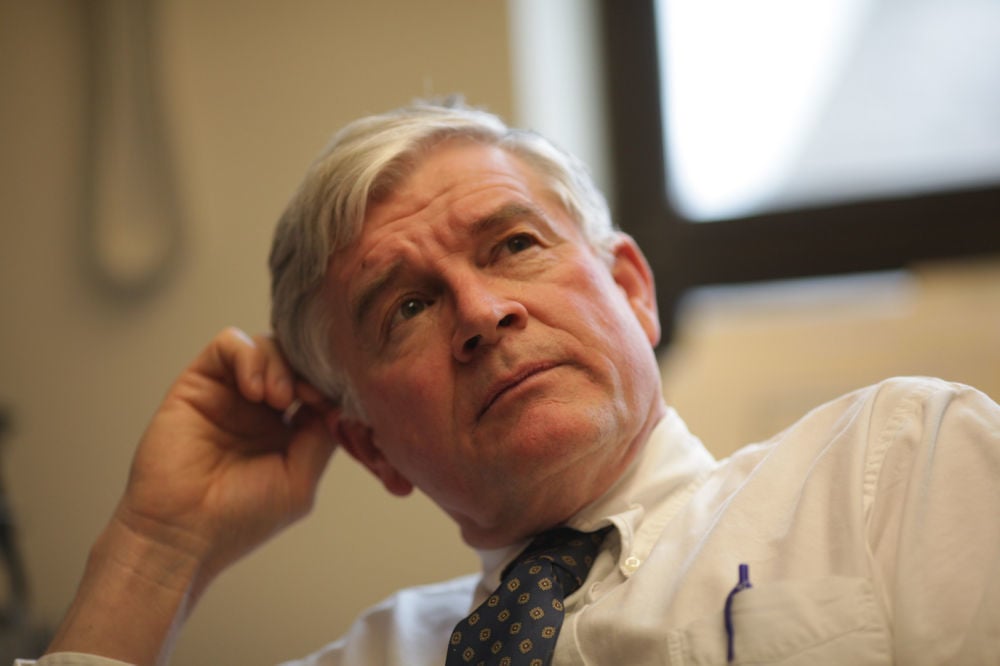 OLYMPIA  Writing legislation, giving voice to a cause and hitting the streets to meet with people are all crucial aspects of representing a political constituency. Citizens expect elected officials to talk the talk and walk the walk.

As a state representative for the 19th Legislative District, Dean Takko knows he is no exception. In addition to meeting with constituents, campaigning for their issues and maintaining working relationships throughout the state, Takko says the duties of the House require a lot of walking and talking  in person and via email.

Spending Monday through Friday  and sometimes weekends  at the state Capitol in Olympia, Takko says much of his in-session free time is consumed with walking. As a former runner, the legislator sees his many steps as an advantage.

Part of my exercise routine here is that at the Capitol building, he says. I have not used an elevator in five years.

Any idle moment is not wasted either, as he is often multitasking by sifting through hundreds of emails in his inbox, typically consisting of citizen feedback, requests for assistance, and cookie-cutter requests sent out on behalf of one campaign or another.

The emails dont stop, there are hundreds upon hundreds, he says. With the internet and email we can just get flooded with things instantly. We spend a lot of time on these things. Ill usually have 500 or 600 in a weekend.

Yet despite the demands, the jam-packed schedule and the hours on his feet, Takko says there are many positives to the job.

I enjoy it, he says of his duties. But you can have great emotional swings out there. It can be pretty frustrating when you know you have a great idea or its not your idea but its a good issue you want to see moved forward, and people are blocking it. Its not fun, but its really interesting. Fun is fishing, hunting, bowling or golfing. No one ever wakes up and says, I think Ill go legislate things today.

Born in Ilwaco and a 1968 graduate of Wahkiakum High School, Takko received his associates degree from Lower Columbia College in 1970 and a Bachelor of Science degree in environmental planning from Western Washington University in 1972.

From 1975 to 1978, he was the Wahkiakum County assessor. Then he was hired as the chief appraiser and administrative assistant at the Cowlitz County Assessors Office until 1999, when he took over as assessor.

In 2004, he was appointed to the house when Brian Hatfield resigned to take a job in the lieutenant governors office. This year marks Takkos ninth legislative session. He is the current chair of the Local Government Committee, and also serves on the Public Safety Committee and the Transportation Committee.

Every day starts usually at 8 a.m. But we also  [Rep. Brian] Blake, [Sen.] Hatfield and I  well do conference calls at 7 a.m. It just kind of depends, but typically there will be a committee hearing at 8 a.m. Ill have three two-hour committee hearings a day, so a lot of your day is eaten up with hearings.

I chair a Local Government Committee, and when you chair, it adds a little bit of responsibility in what you have to do, he explains. When youre a committee chair, people are always wanting your bill scheduled, getting a hearing, getting it through your committee.

We get quite a few bills in our committee because we hear anything that deals with fire districts, counties, cities and ports  and unfortunately I cant hear all of them, he adds. There are some bills that dont have a prayer in the world, so I put those aside.

Takko says the bills that are usually filtered out are ones that were written with the intention of making a statement.

Takko notes that while citizens should retain the right to accessing public information, the bill is aimed at cutting down on costs and time spent on frivolous records requests, such as when people request thousands of pages of records for no other reason than someone was fired or their land use permit application wasnt approved.

We had a hearing on it two weeks ago and had a number of people from local governments and they testified their horror stories that they spent thousands on these public records requests, he explains.

Essentially what the bill allows is if a county has somebody come in, and they were fired the week before and request documents of information that isnít relevant to their firing, then the office can ask a judge to file an injunction. And if the judge agrees, they wonít have to complete the request. Now if the judge says they have to, then they will have to do the request.

I think its a pretty good bill, it went through committee and all the Ds and all the Rs voted for it.

When it comes to concerns from his constituents, Takko says, Guns are a big issue. My email is just getting flooded with Please protect the Second Amendment and thats what I plan on doing. People in our area, we have guns and we shoot, our district is different from the rest. I dont think the votes are here to do much.

Youre not going to see us banning assault weapons. I certainly feel for those people at Sandy Hook, but it had happened last April, it would be far down the radar screen. But its so fresh. I dont think youll be seeing regulating clip sizes or assault weapons.

In regard to HB 1588, which proposes background checks for all firearm sales in the state, Takko explains, Under this bill, if I come over to your house and say, Thats a pretty neat gun. How much do you want for it? And you say $500, and I give you $500 and I take the gun, you cant do that. You would have to go to the sheriffs office and have a background check done on me first. Who is really going to actually do that?

Referring to the gun show loophole and the demand for more background checks when purchasing firearms, Takko explained, People that are going to do bad things, they dont go to gun shows to buy guns. The statistics show that they steal them. We need to take a closer look at our mental health system, I think that would get us a lot further than gun control laws ... If gun laws made a difference, Chicago, which has the most gun laws in the country, should be the safest place, and it isnt.

Takko is also concerned about the status of the stateís capital budget, especially in regard to the McCleary Decision, which defined the stateís duty to fund education before funding any other obligations.

The big $64,000 question is how to deal with McCleary Decision and revenue we need, he explains. Were looking for a billion dollars this year for the McCleary Decision, but thats just for one biennium. Were told we may need $2 billion for next two bienniums. Were not going to turn around the economy and state revenues that fast. I hope we do, but I dont think thats realistic.

He says the implementation of the McCleary Decision will bring positive changes to areas around the state. I think it will be good for schools all over the state, particularly smaller schools in Cowlitz and Pacific counties.

Takko says he opposes sweeping dollars from the Public Works Trust Fund or Model Toxics Control Act Fund to balance the budget rather than spending them on the projects in which they were intended to support, as those projects create jobs.

The Public Works Trust Fund has been used a lot in the 19th District, just about every one of the smaller cities has used it, he states.

Retaining the capital budget is also important to Takko, as there are monies that could benefit projects in Seaview, South Bend, North Willapa and Chinook.

I cant imagine not having a capital budget, its just a question as to the size, he explains. ... Thats the frustrating thing. The governor put out a budget, which doesnt mean anything because shes not the governor anymore and new things will be put out.

A lot of the stuff is big picture things, but it will be useful for every county, he explains. If its good for the state, its good for county.

Were probably going to come out with a transportation package, he says. Theres obviously things in the 19th District, but probably the bigger projects wont be in Pacific County.

Takko says what he enjoys most about his job is that he gets to see and experience things that most people dont, such as spending a day on a dredge on Columbia River, riding ferry boats, touring gold mines in Republic, checking out windmills and dams, touring biomedical, technical and manufacturing facilities, and visiting farmers on the east side of the state.

[As a legislator], youre always being invited by public entities or private businesses to see what theyre working on ... Ive always enjoyed it. Ive got this incredible curiosity of how things or made or how things are done.

Even though he has an active role in the legislative process, Takko says even he is challenged with the frustration that thereís things that we should be able to move forward but it takes forever for things to change. One example that comes to mind was when the House was putting through legislation to replace the SR 520 bridge.

Its just frustrating when you cant just sit down and say, By golly we want to build a bridge and were going to build a bridge. Im not impatient person, but I hate that the wheels of government turn so slowly. Im a shoot-from-the-hip kind of person.

And some days, its tough being away from home.

By Thursday, Friday at end of session Im thinking, God I wish I was home, explains Takko, who lives in Longview with his wife, Debra. I just kind of house-sit ... So I dont have my own stuff. I just basically have my clothes and my toothbrush. And I miss not being able to my garage and tinker around in the evening.

If theres any consolation for some of the comforts that are sacrificed, Takko admits that he appreciates the positive working relationship he shares with Sen. Hatfield and Rep. Blake.

Noting that there are other districts with elected officials that dont work together as well as they have been able to, Takko says the three men never miss an opportunity to tease one another. There have been times where Blake has said to me, or I have said to him, I cant believe you got me sign up for that bill! You got me to cosponsor a bill for what?

We have three different personalities, we work on different issues and yet we can kid each other on stuff, he says. Blake and I go hunting together and he missed one time  and hes still paying for that. When he tells people what a great hunter he is, I have to remind him.

Actor has battled virus symptoms for months. Hear his message