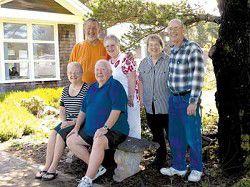 <I>LYNDA LAYNE photos</I><BR>Three couples celebrated their Golden anniversaries Sunday at a family reunion at the Peninsula Senior Center. All were married in the Longview area in 1960. Seated are Ruth and Tom Anderson of Chandler, Arizona. Standing (left to right) are Jim and Sharon Crayne, also of Arizona and Peninsula residents Sandy and Bob Stewart. 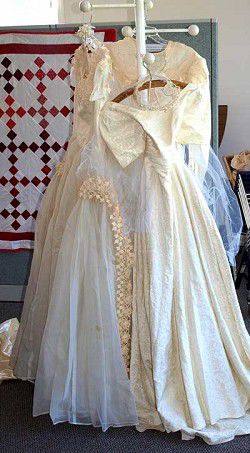 Wedding dresses hanging in a corner at the Peninsula Senior Activity Center on Sunday during a family reunion were originally worn in 1960. They signified the vows taken 50 years ago by three couples whose triple wedding anniversary celebration was the focus of the reunion festivities.

<I>LYNDA LAYNE photos</I><BR>Three couples celebrated their Golden anniversaries Sunday at a family reunion at the Peninsula Senior Center. All were married in the Longview area in 1960. Seated are Ruth and Tom Anderson of Chandler, Arizona. Standing (left to right) are Jim and Sharon Crayne, also of Arizona and Peninsula residents Sandy and Bob Stewart.

Wedding dresses hanging in a corner at the Peninsula Senior Activity Center on Sunday during a family reunion were originally worn in 1960. They signified the vows taken 50 years ago by three couples whose triple wedding anniversary celebration was the focus of the reunion festivities.

OCEAN PARK - In 1960, when three women of the Leak family walked down the aisle, they took their vows seriously. Back then, if anyone might have even suggested "it will never last," those naysayers would now be eating crow. Lots of it. Probably at least 50 pounds worth. They could have scarfed it down Sunday at the Peninsula Senior Activity Center, alongside a huge sheet cake decorated with the names of those three couples who, this year, each celebrate 50 years of marriage.

Sandy Stewart of Ocean Park was one of those 1960 brides. And from what she says, 50 seems to be the lucky number for this family line. She explained that her grandmother had 10 children. Five were girls. "And there's been four of the five sisters that have had 50th anniversaries," she said. One of those four, "the baby of the family," is Ruth Anderson, Stewart's aunt. She and her husband, Tom, came from Chandler, Ariz. to celebrate their half century together - with, yes - the 50 people that attended the reunion and celebration Sunday.

Also from Arizona were Jim and Sharon Crayne. Sharon is Sandy's sister. All three of these couples were married in the Longview area. Ruth and Tom Anderson recited their vows at the First United Methodist Church in Kelso on May 21, 1960. The Craynes were united in marriage at the Longview Community Church on June 2, 1960. Sandy Stewart and her husband, Bob, were married at Longview's Saint Rose Catholic Church on Oct. 22, 1960.

The brides had strong ties to the Longview area and Washington state, in general. Sandy recalled, "My grandmother was State Mother of the Year in 1955."

The Peninsula was also a part of growing up in the Longview-based Leak family. Before Bob and Sandy Stewart moved here about 10 years ago, "We had come here our whole life," she said. The vacation trips started when she was a baby and continued through her school years and into her adult life. "And then when my husband and I were going together, he came with us - with my family. We got married and had kids and brought them here. And then they brought their kids."

Treasured photos chronicle the trips that several generations of this family have made to this area. One is of Sandy's grandparents and "a few of their friends" clamdigging. The women, she said, "Did it in dresses."

Sandy feels lucky to have had such a solid, loving upbringing. She said they have always been a God-loving family and that from an early age, she saw her grandparents as "great examples." While her grandparents have long since passed, her mother is carrying on the matriarchal torch and was present at the reunion Sunday, with more generations of the Leak family. The reunion is a yearly event. The last one was for mainly two generations and the Stewarts held it in their home. But this year, they knew they'd need more space. Sandy said, "I sent out 45 invitations and that's three generations. We were hoping to get a big response, because we just really wanted to celebrate. We thought this was going to be something unusual, with three couples having 50th anniversaries."

The three generations invited to attended expanded and there were possibly five generations present Sunday, with small children to senior citizens crowding the center. Sandy said she hopes that she and Bob, along with the other two couples that celebrated their Golden anniversaries, can be role models for young people in the family that are married now or soon will be. She said when they were married in the 1960s, "We went into it to stay married for life. For richer and poorer, as it goes. And we've had a lot of those things happen, but all three marriages have survived."

One of the keys, she said, is that, "We've had a very supportive family that's been very close." Some of the younger people at the reunion, she feels, might not have previously known the strong ties she, her sisters and aunt experienced. "They don't know the tie we had in those first three generations." That left her hoping "the younger ones would show up, so they'll know they've got this supportive group."

And show up, they did. Generations of this family laughed, hugged and shared stories. The feeling of love was everywhere.

When it came time for photos of the three couples, the Crayne's granddaughter, smiling, said she would go round up "the kids." And as "the kids" posed under a tree outside the senior center, it was easy to see that even though they've each been married for 50 years, they're still very much young at heart.

After photos, they drifted back inside. Jim Crayne actually rushed to the grill where he was in charge of cooking oysters. The others milled through the crowd, near a long table set up with the anniversary cake and cake cups from those three 1960 weddings. "We even have my grandmother's 50th anniversary cake cup," Stewart noted.

Near the table was a decorative white pole, supporting the young-at-heart ladies' three 50-year-old wedding dresses and their veils, sporting delicate lace and intricate bead work. Can they still fit into those gowns? "Absolutely not," Sandy said, laughing.

Pelosi: Manchin left door ajar on HR1 and I'm not giving up

Pennsylvania lawmaker to GOP: 'Are you not 100 percent white?'