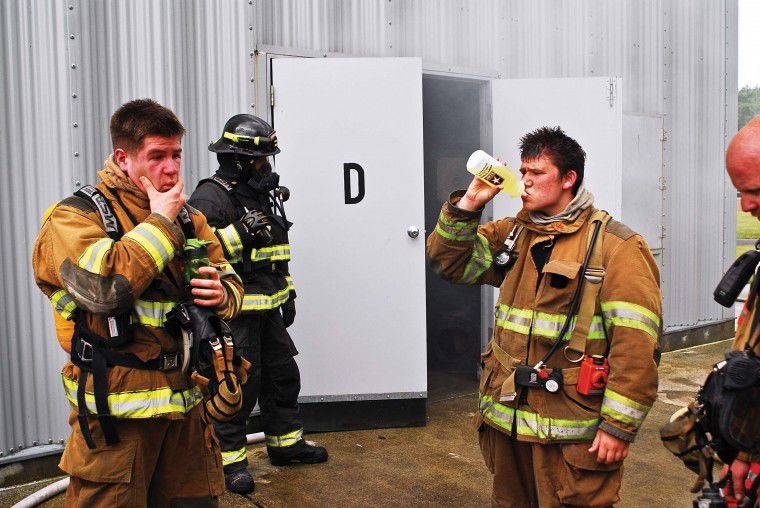 Firefighter cadets, like IHS student Jaykub Bridges (LEFT), got a taste of the heat that comes along with a structure fire during hose drills at Cadet Days, a three-day event at Clatsop College's MERTS campus last week. 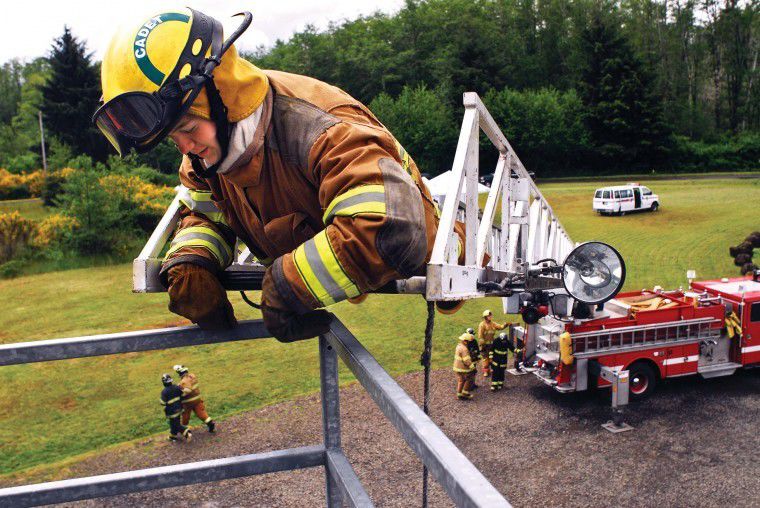 Before dismounting from an aerial truck ladder, Tanner Weidner has to answer some fire-related quiz questions. 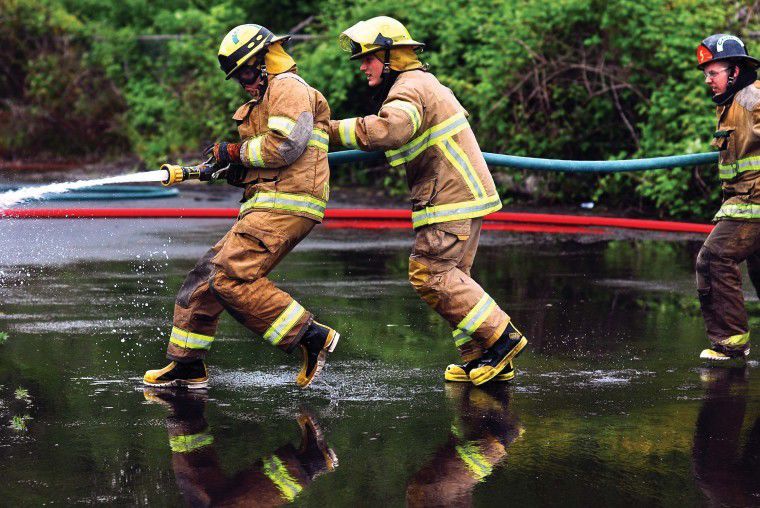 Marcos Diaz takes the lead for his team during an activity where two hose-wielding groups battle with water spray to push a bowling ball one way or another. 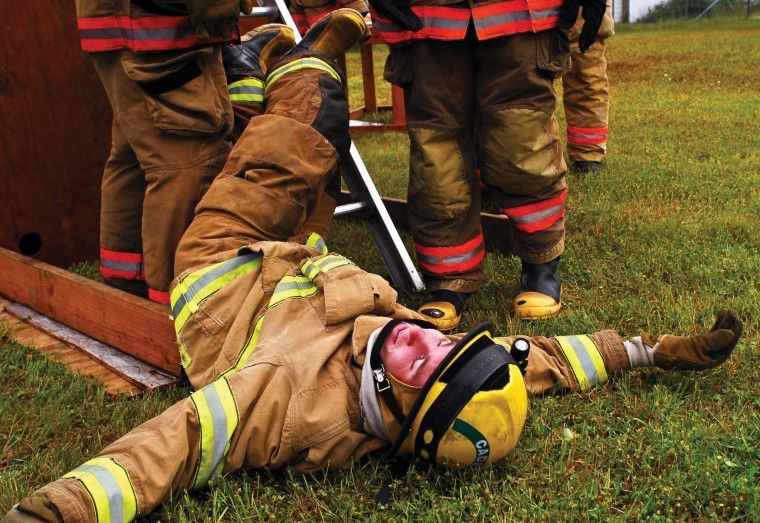 Ilwaco's Tyler Shaw is placed on the ground after being extracted through a small windowed structure during a drill that simulates the rescue of an unconscious person.

Firefighter cadets, like IHS student Jaykub Bridges (LEFT), got a taste of the heat that comes along with a structure fire during hose drills at Cadet Days, a three-day event at Clatsop College's MERTS campus last week.

Before dismounting from an aerial truck ladder, Tanner Weidner has to answer some fire-related quiz questions.

Marcos Diaz takes the lead for his team during an activity where two hose-wielding groups battle with water spray to push a bowling ball one way or another.

Ilwaco's Tyler Shaw is placed on the ground after being extracted through a small windowed structure during a drill that simulates the rescue of an unconscious person.

Ilwaco High School students Tyler Shaw, Jaykub Bridges, Tanner Weidner, Taylor Odneal, Richard Willis, Marcos Diaz and Michael Weatherby were seven of the 111 16- to 18-year-olds who participated in Astorias annual Cadet Days, a three-day event that allows cadets to use the firefighter 1 skills theyve learned throughout the school year and experience what a typical firefighters shift might entail. This was the fourth year that Pacific County Fire District No.1 (PCFD1) cadets have participated in the camp.

Though this was Odneals first year in the cadet program, he confirmed that one year was enough to inspire him to pursue further in fire science.

My first year, it went perfect, it was all that I thought it would be, he said of his cadet class work. It was a lot of fun. It was a good experience of what they did in the fire district, its pretty awesome. I like how it was all set up  I couldnt believe all that stuff actually prepared us for MERTS.

Astoria Fire & Rescue Deputy Chief Steve Straily says Cadet Days is a place where the kids develop and work as a team, build character, and learn skills to build relationships.

Each cadet pays a fee to participate in the event, and some cadet classes hold fundraisers in order to attend.

Tara Constantine, public information officer for Astoria Fire & Rescue, says Cadet Days has grown greatly since hosting the first group of 25 cadets seven years ago. Its such a fun experience, the kids have a blast.

On Wednesday, all the instructors and cadets arrived at Camp Rilea, which was their home base during Cadet Days.

Their first day included Field Leadership Assessment Courses (FLAC), where cadet groups are split up and grouped with cadets from other departments, creating four battalions. Each battalion consisted of six companies. The company assignments resulted in the cadets meeting and working with new people, and sharing their knowledge and skills.

Quite possibly one of the strangest FLAC tasks of the day was a brainteaser where the instructors set a weighted coffee can on the ground inside a 10-foot circle. Standing on the outside of the circle, cadets were given only rope and large rubber bands to pick up the can and move it.

The students also played a firefighting trivia game where singing karaoke was the punishment for every wrong answer.

At the end of each day, they returned to Camp Rilea for dinner and were allowed two hours of free time before bed. Several times each night, the cadets are woken from their slumber to respond to emergency drills, just as a firefighter is often jolted out of bed for a fire call.

According to Straily, the cadets had three minutes to suit up and put on their SCBAs (self-contained breathing apparatus), and be in formation within five minutes. Sometimes the calls were cancelled and the kids could return to their beds; other times a company or battalion would be given training drills to complete. Instructors said that some cadets were sleeping in their turnout gear so that theyd be ready for their wakeup calls. Those cadets were forced to change into their sleeping clothes, so that they would have the real firefighter experience, with only minutes to suit up and respond.

Lights were on again at 6 a.m. The cadets were expected to be up and out of their units, eat their breakfast and be at the drill grounds by 7:30 a.m., so that they would arrive at MERTS at 8 a.m.

Karvia spent much of his time among three fire hose operation stations. Each station had two four-person cadet teams competing against each other to hone their hose handling skills.

At each station, cadets were practicing nozzle control and teamwork. Karvia said the person in front, operating the nozzle, is like the accelerator in a car, while the three people handling the hose behind him work together as the steering wheel  they have to anticipate where the nozzle operator will move next, how much hose is needed, and whether the hose will be angled upward or downward.

One of the stations featured hose roll bowling, where cadets fling a tightly coiled fire hose down a makeshift bowling lane to knock down bowling pins with the other end of the hose. There are points, foul lines, spares and strikes, just as there would be in regular bowling, but when one team gets a strike, the other team has to do push-ups.

Most of the training we did was to build up teamwork, working with other people, said Odneal, who graduated a day after Cadet Days concluded.

We didnt really work with our own cadet class but with other cadet classes from Everett and Kelso, and it built up teamwork amongst other people, and we played a lot of games. People might think its a lot of work and it sucks, but its a blast.

Inside the 8,000-square-foot, three-story Fire Response and Research Center, the cadet teams were given hands-on firefighting experience in structural and makeshift maritime settings with computer-controlled burn props fueled by natural gas.

In a nearby classroom, master controls on a computer monitor showed which prop fires were burning, the temperatures at which they were burning, and other information. The props can be controlled with the computer or by remotes. To make the experience as close to real life as possible, the props are designed to reignite if the cadets dont put enough water on the fire.

Hansen says the facility is a lifesaving tool in that, unlike in a real fire or rescue, if a task isnt executed correctly, theres an opportunity to try it again and correct the mistake. And in case of a real emergency, the facilitys high-powered fans can clear out the artificial smoke out in about 45 seconds.

Various ladder and stairway designs  from angled and upright ladders to stairwells that one might use at an apartment building  provide access to the three floors at the Center. Some doorways are like an average household door, while others are like a smaller, rounded door found on a ship.

The first floor rooms simulate fires that one would encounter on a ship. In one room, the cadets are sent in to put out a pressurized fuel fire by shutting off the fuel supply. They also demonstrate their skills in a simulated fire  when the flames rise and spread across the ceiling.

Another room replicates what might happen in a class B (flammable liquid) bilge fire aboard a ship. When cadets aimed a solid stream of water at the fire, the prop responded by increasing the size of the fire. But when they used the more appropriate fog stream setting on the nozzle, they were able to put out the flames.

The second floor is equipped with moveable walls to create a kitchen or galley fire, as well as a bunk bed or bedroom fire. The top floor is wide-open area for search and rescue operations.

After filling the space with harmless, but realistic mineral-based smoke, the cadets were sent into an environment where they cant even see their hands in front of their faces. Its dark, disorientating and nauseatingly hot, and their only reliable guide to maneuver through the mess is a hose line, which leads them into the fire or back to the exit depending on which way they follow it.

Hansen says the cadets know which way theyre going by feeling the hardware that connects the hoses together. One coupling  the female  is made from two metal pieces and will always guide them toward the exit. The other coupling  the male  will be guide them to the nozzle end of the hose, where the fire is.

On the buildings exterior, a rope rappelling station required cadets use the techniques they have learned to rescue someone out of the depths of a ship. Hansen says his department uses similar rope techniques to rescue people when they suffer medical emergencies at the top of the Astoria Column.

I didnt know how our skills were going to compare to other cadets, said Odneal. I was kind of worried, because were not always up to date around here. There was Everett and Kelso there, so I thought we might be out of the loop, but we competed really well. I felt we had a lot of knowledge, and used it during live fire drills. I felt like a real firefighter.

The highlight was the first day at MERTS. The rollover fire and putting that fire out, going through that was pretty awesome. I mean Ive never seen that before, and when you go in the room and all of sudden the flames are over your head, its pretty impressive.

Karvia noted that even though the MERTS campus hosts training sessions for local volunteer and career firefighters every year, its a shame that many dont realize how valuable the $2.7 million facility is, not only to the Pacific Northwest, but to the entire West Coast.

This is the future of firefighter training  a natural gas or propane facility, he assured. The value of this three-day event is that all cadets from seven different departments are split up into different companies to teach leadership, safety, responsibility, accountability and management of their actions. The instructors learn, too. They network with one another, share knowledge, skills, their vision and what they want to do next year, debriefing and managing resources.

At the end of the day Friday, the cadets and instructors exchanged challenge coins, which commemorate their participation in Cadet Days 2011  three days that likely impacted each student with an experience worth its weight in gold.