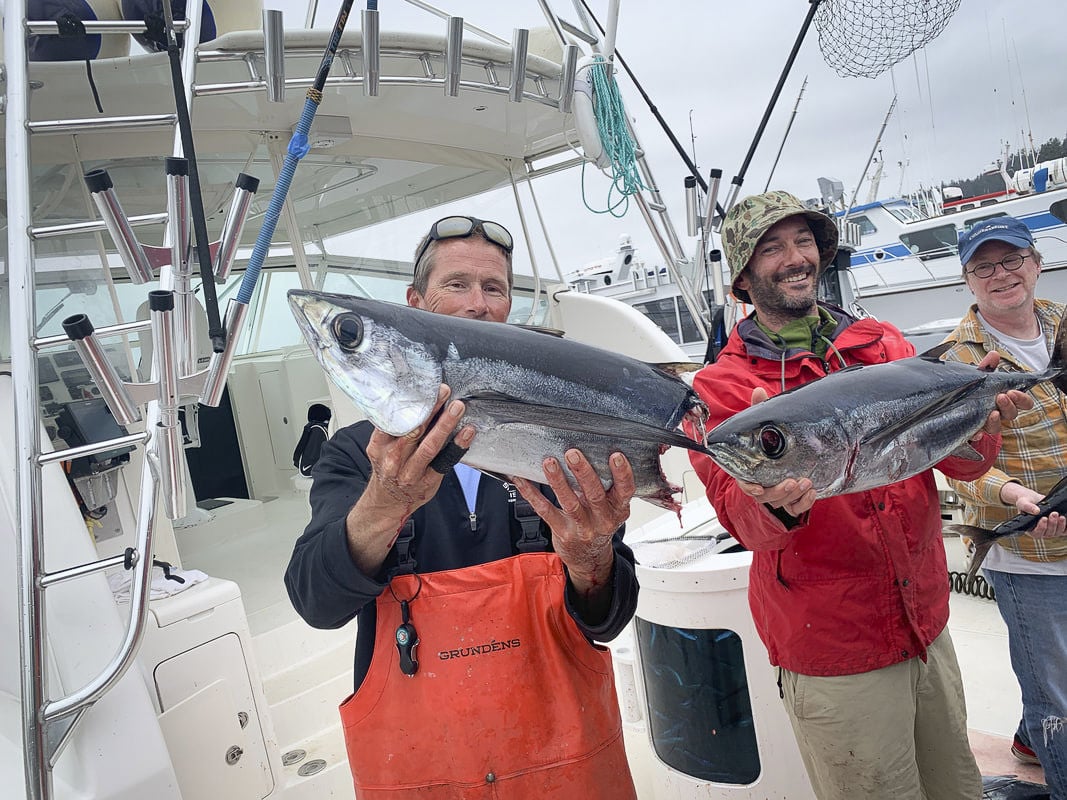 Shake N’ Bake deckhand Clark Von Essen, left, holds an albacore tuna that was bitten by an estimated 200-pound mako shark during a charter trip in July. Fishermen are reporting increased interactions with fish species typically found in the southern Pacific, including marlin, sharks and mahi-mahi. 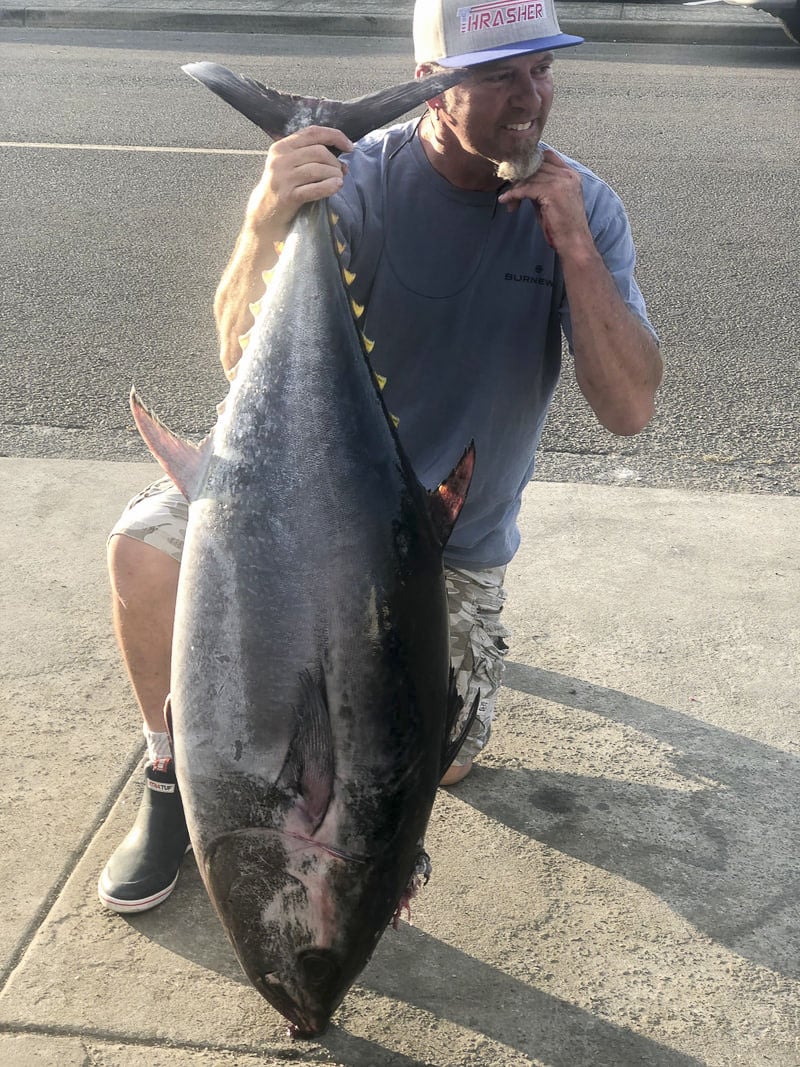 A Washington state record 92-pound bluefin tuna was reeled in off the southern coast from Ilwaco by a recreational angler Aug. 12, shattering the previous record set in 2014 by more than 50 pounds. He preferred not to be identified. 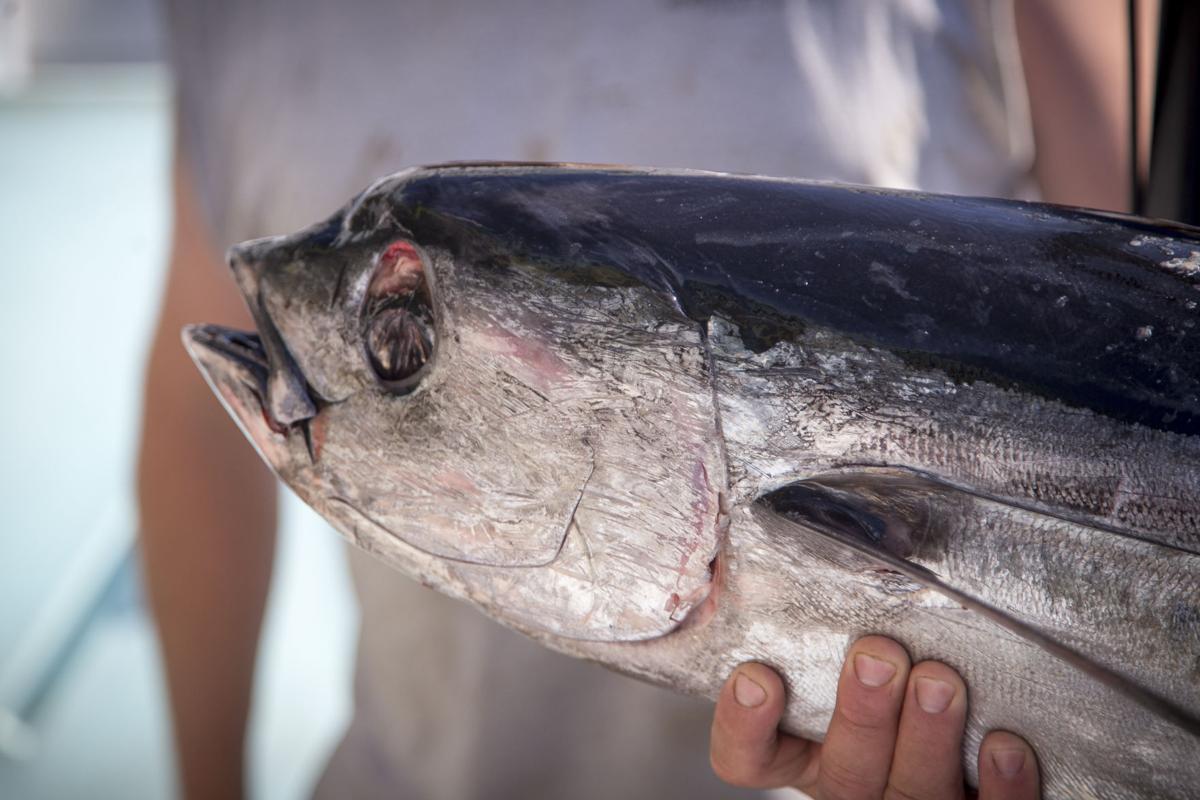 This unusual looking tuna was caught during a July fishing tournament in Ilwaco. 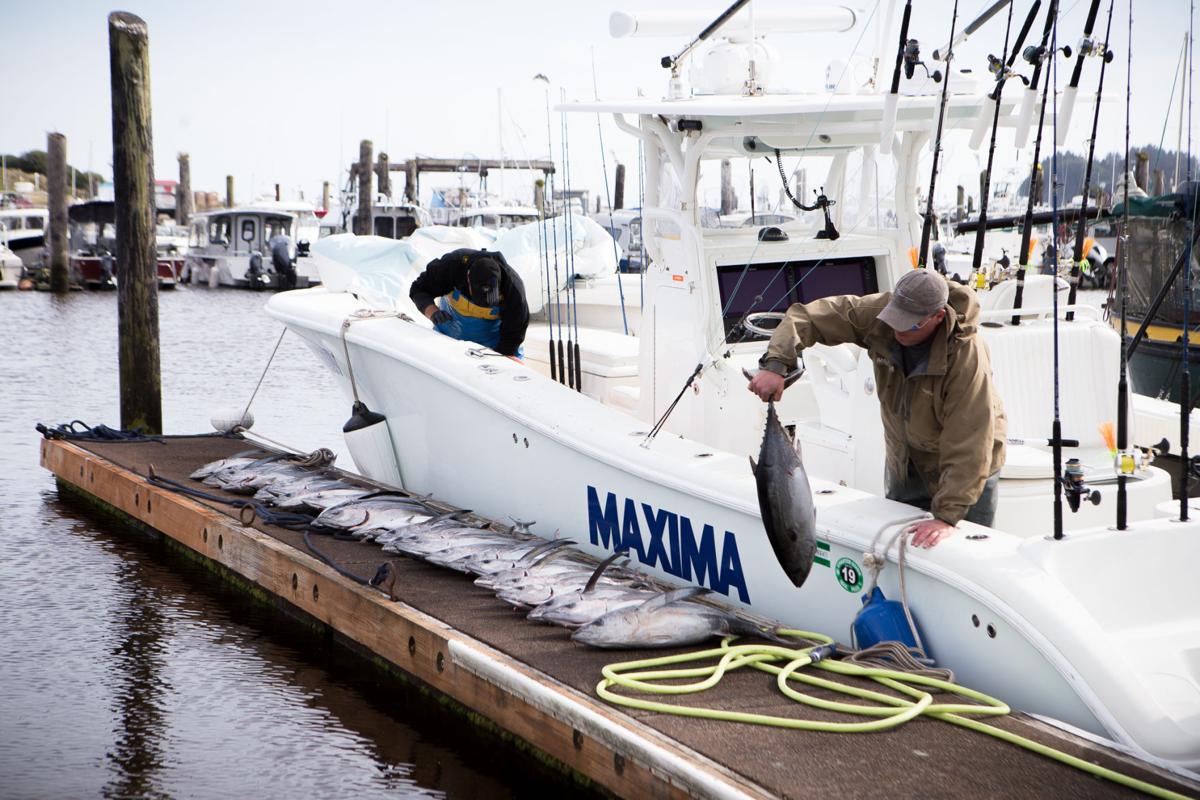 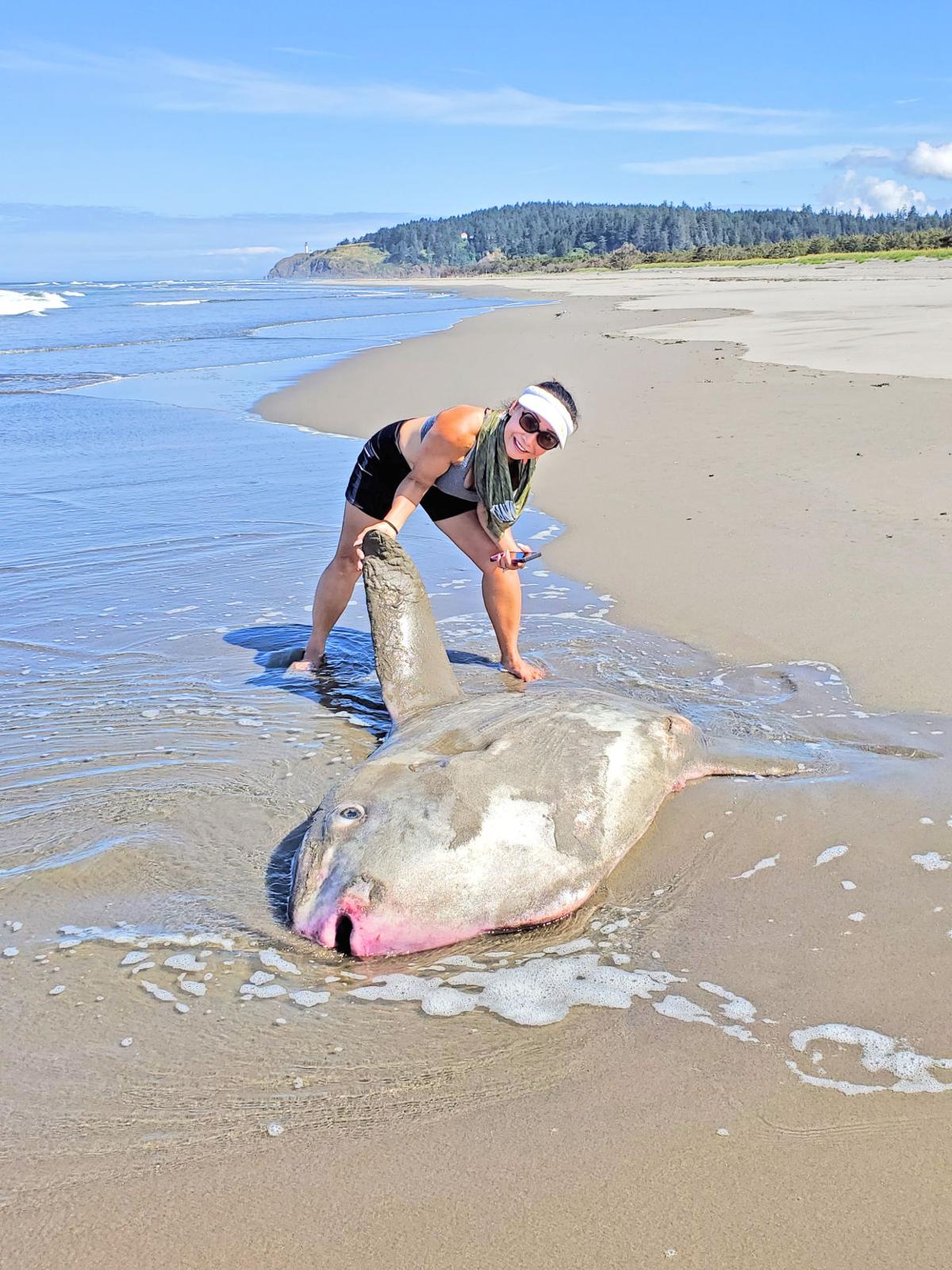 Maimai Benson examines a washed up sunfish on Benson Beach in Cape Disappointment State Park in August 2019. Also called mola mola, they’re somewhat uncommon in ocean waters with temperatures under 54 degrees. They occasionally turn up in the North Pacific around the mouth of the Columbia.

Total Fisherman Guide Service owner Kevin Newell, pictured, said it’s been the best tuna fishing in his nearly 20 years of guiding. Oregon is on track to set a new seasonal record for recreational albacore landings, according to the Oregon Department of Fish and Wildlife.

PACIFIC NORTHWEST — It’s been a summer of frenetic fishing in the Pacific Northwest, with rare sightings and record catch.

Recreational fishermen along the Oregon and Washington coasts are reporting some of the best albacore tuna fishing in years, in addition to unusual sightings and reeling in some unusual bycatch, a perceived result of warm-water conditions offshore.

A Washington state record 92-pound bluefin tuna was reeled in off the southern coast of Ilwaco by a recreational angler Aug. 12, shattering the previous record set in 2014 by more than 50 pounds.

An abundance of albacore tuna close to shore, some less than 30 miles, has resulted in a boon for local recreational fleets as their relative proximity has permitted more boats to reach the fish in a manageable amount of time.

Several recreational charter skippers are reporting the best tuna fishing in years, with dozens of tuna being caught daily on trips out of Ilwaco, Warrenton and Astoria.

Oregon is on track to set a new seasonal record for recreational albacore landings, according to the Oregon Department of Fish and Wildlife.

With no set daily limit for albacore in Washington, recreational fishermen are permitted to “plug the boat” with as many fish as they can fit.

Shake N’ Bake owner Mike Colbach has had several 50-plus fish days on his Ilwaco-based charter this season. In 2018, Colbach curtailed charter trips due to poor tuna fishing, but this summer he’s adding dates to the calendar and encouraging customers to book.

During the Offshore Tuna Classic in Ilwaco in late July, each of the 30 participating boats caught tuna, a rare occurrence according to tournament chairman Del Stephens, who also reported tuna were spotted less than 15 miles offshore. Typically albacore are found between 40 to 80 miles offshore, but can be further depending on water surface temperatures.

Hookups of Pacific blue marlin and striped marlin, often caught in the warmer waters off the Baja California coast, have surprised several fishermen trolling off the Washington coast. No official landings have been reported as the big fish regularly break off lighter albacore rigs.

Increased landings of bluefin, big eye tuna, mahi-mahi and mako sharks, more commonly caught in the South Pacific, have been reported along with sightings of rare species including Humboldt squid and blue whales. A large sunfish washed ashore on Benson Beach in Cape Disappointment State Park.

Heikkila said ocean conditions could be causing the catch anomalies.

“I think this warm water is doing some strange things and we just don’t quite know good or bad. With all those other species showing up this high in Washington and Oregon, you really don’t see that. I’ve seen it in California during years when we’ve had El Niños, sometimes you catch some different species off central California, but there’s been a lot of different species around this year,” he said.

The warm water is impacting fisheries elsewhere too.

“The water offshore is 70 degrees and (if you look at water charts) it goes way up toward Alaska,” Heikkila said.

“Alaska is having real problems with hot water this year. There seems to be a narrower band of cooler water anywhere from 30 to 100 miles off the beach, the area where we normally catch fish in the summer, and it seems there a lot of hot water offshore. I can’t really say I can compare this year to any so far. It’s just a little bit different.”

Adviser to Iran's Speaker of Parliament: US has constantly lost opportunities