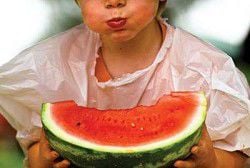 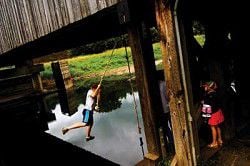 GRAYS?RIVER - At 103 years old, the Grays River Covered Bridge is the last of its kind still in use in the state of Washington - all the more reason to celebrate its history.

Well over 100 people came Saturday to the biannual festival in its honor, to pay tribute to the structure that has helped to define their community. In the field next to the National Historic Site, vendors set up tents, the Naselle Marimba Band performed and games like a watermelon eating contest were held. Lane Esvelt (ABOVE) finished first in his division - he was also the only participant in his age group. And while the color of the sky pretty much matched that of the bridge itself, that didn't stop Nick Zimmerman (BELOW) from trying his luck on the rope swings under the bridge, eventually ending up in the cool water.

Andrea Flores' new book "No Apoyo La Violencia" gives a great way for one to overcome abuse and the endless pain of suffering under the hands of the abuser.