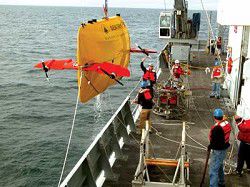 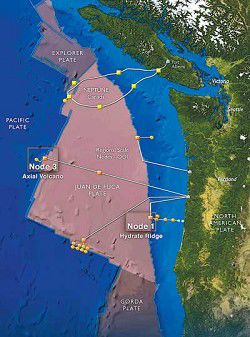 <I>UNIVERSITY of WASHINGTON graphic</I><BR>Scientists have finalized the locations of two observatory sites, or nodes, for the Regional Scale Nodes Project. The site at Hydrate Ridge gives them a chance to learn more about icy, energy-rich methane deposits and the life found there. The Axial Volcano west of Long Beach is a key research target.

<I>UNIVERSITY of WASHINGTON graphic</I><BR>Scientists have finalized the locations of two observatory sites, or nodes, for the Regional Scale Nodes Project. The site at Hydrate Ridge gives them a chance to learn more about icy, energy-rich methane deposits and the life found there. The Axial Volcano west of Long Beach is a key research target.

LONG BEACH - Like a deep-sea bloodhound, Sentry - the newest in an elite group of unmanned submersibles able to operate on their own in demanding and rugged environments - has helped scientists pinpoint optimal locations for two observation sites of a pioneering seafloor laboratory being planned off Washington and Oregon.

Successful selection of the two sites is a crucial step in developing an extensive sensor network above and below the seafloor on the Juan de Fuca Plate, according to John Delaney, University of Washington oceanographer and chief scientist for a two-week mapping expedition.

The network, which will be connected to land by underwater cables from locations near Warrenton and Pacific City, Ore., will help unlock secrets about such things as the ocean's ability to absorb greenhouse gases and help scientists learn how seafloor stresses cause earthquakes and tsunamis. The network is one component of a wider project being overseen by the Consortium for Ocean Leadership as part of the National Science Foundation's Oceans Observatories Initiative.

"The ocean community is on the threshold of a new era in which an ensemble of novel technologies will provide us with an increasingly powerful capacity for exploring and interacting with the global ocean system," Delaney said. "The cruise itself is an example of the coming generation of systems, where highly capable autonomous underwater vehicles like Sentry will be integral components. Today's AUVs are helping us develop the power and high-speed communications network we'll need to explore powerful and potentially dangerous processes at underwater volcanoes, within powerful tsunamis or in the wake of large storms and hurricanes."

In plans thus far, cables from two places on land will extend to five primary nodes - each about the size of a large dinner table. Like underwater extension cords, the nodes will supply power to - and communicate with - instruments, robots and smaller secondary nodes.

Choosing the right sites involved mapping and imaging in remarkable detail using sonar instruments, a towed camera and Sentry. Sentry, for instance, produces maps precise to within 1 meter, or about 3 1/2 feet, as it glides about 250 feet above the seafloor. Operators program the vehicle with directions of the area to map but the vehicle is on its own when it comes to maneuvering up and down cliffs, basins and other terrain that it encounters, all while keeping a consistent distance from the bottom.

The one-of-a-kind autonomous underwater vehicle - built by Woods Hole Oceanographic Institution with funding largely from the National Science Foundation - made six dives during the July 22 to Aug. 5 expedition. It was the first time the vehicle has been used during an actual oceanographic research cruise. Sentry surveyed 212 linear kilometers of seafloor, or about 53 square kilometers, as it traced parallel lines like a lawn mower making a pattern across a yard.

"Seeing the first maps pop up on our screen was a real thrill for us, they represent the results of hard work by all members of our team," said Dana Yoerger, the lead Woods Hole Oceanographic Institution engineer of Sentry.

The work made it possible to finalize locations for two critical sites. One is near an area 50 miles off Newport, Ore., where scientists would like to learn more about the icy methane that collects on or below the seafloor where the Juan de Fuca plate dives beneath North America.

"Most developed nations have major research efforts focused on understanding - and learning to use - these energy-rich deposits of methane," Delaney said. "Our plan is to build the infrastructure that will allow entire generations of scientists to study these deposits firsthand using robotic telepresence - no other country is there yet."

The other site is about 300 miles west of Long Beach and in a decidedly different environment. That one's on top of Axial Seamount, the largest active submarine volcano east of Hawaii and north of Baja California, Mexico. Earthquakes, eruptions and hydrothermal venting at Axial Seamount are representative of what happens worldwide along the 43,000 mile Mid-Ocean Ridge System.

"The key to choosing these locations is to find sites that are protected but within reach of really interesting processes that we're trying to investigate," said Deborah Kelley, UW oceanographer and co-chief scientist on the expedition. For details on all of the tools used, as well as preliminary surveying for other parts of the planned observatory, see the expedition's Web site at http://ooi.ocean.washington.edu/cruise/.

"This investment into emerging technologies is paying off in delivering state-of-the-art science support," said Julie Morris, director of National Science Foundation's Division of Ocean Sciences. "In the near future, Sentry will conduct high-resolution oceanographic surveys that would be otherwise impossible.

The expedition was funded by the NSF through the Consortium for Ocean Leadership, Arizona State University and the UW School of Oceanography. There were 32 scientists, engineers, marine technicians and students on board, representing the UW, ASU, WHOI, College of Charleston and the National Institute of Advanced Industrial Science and Technology, Japan.

What's left of a glacier that's thousands of years old

Two dead and others injured in South Carolina club shooting