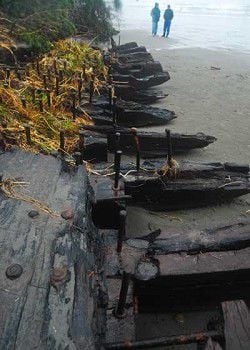 Since being uncovered by recent beach erosion, many have come out to Washaway Beach to see the exposed wreckage of the vessel Canadian Exporter which went aground in 1921.<I><BR>Photo by DAMIAN?MULINIX/Chinook Observer</I> 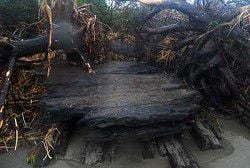 When the ground above the wreckage gave way, so did several trees atop the old ship.<I><BR>Photo by DAMIAN?MULINIX/Chinook Observer</I>

Since being uncovered by recent beach erosion, many have come out to Washaway Beach to see the exposed wreckage of the vessel Canadian Exporter which went aground in 1921.<I><BR>Photo by DAMIAN?MULINIX/Chinook Observer</I>

When the ground above the wreckage gave way, so did several trees atop the old ship.<I><BR>Photo by DAMIAN?MULINIX/Chinook Observer</I>

WASHAWAY BEACH - Last week beachcombers discovered a framework hewn from and partially decked with foot-thick wooden beams in the sands of Washaway Beach, on State Route 105 west of Raymond near the mouth of Willapa Bay.

Jutting hundreds of thick metal rivets, the wreckage was discovered on the extremely unstable beach area between North Cove and Tokeland and just south of Warrenton Cannery Road.

Its location prompted Pacific County officials to caution all who may be curious about the wreck.

"The public is warned to stay away from this shipwreck and the entire area," County Administrative Officer Bryan Harrison said in an e-mail last Friday. "Residents and tourists should consider the entire Washaway Beach area as potentially hazardous. It is not a safe place for the public to visit."

Immediately speculation began as to what the wreckage was and where it had come from. Rex Martin, executive director of Westport Maritime Museum, told local media that the wooden structure could be what remains of the Canadian Exporter, a vessel that went aground in dense fog late on the evening of July 31, 1921, or possibly early the first day of August that year.

The Canadian Exporter is no stranger to being discovered as the Chinook Observer reported March 11, 1999, when 2'x2' fir timbers each worth $2,000 to $7,000 began washing up between Willapa Bay and Grays Harbor. They were marked "HRM" - short for timber company H.R. McMillan - and were believed to have worked their way loose from an unsalvaged portion of the Exporter.

Strong westerly winds typical for that time of the year and continual erosion at Washaway Beach evidently unearthed some of the Exporter's wooden structure and those large timbers washed ashore.

Efforts are underway to positively identify the wreckage and to determine if it lies on public or private lands as much of Washaway Beach has washed away. If the wreck is on public lands and any private ownership rights have lapsed, Martin wants to acquire it for the Westport museum by petitioning the State Department of Archaeology and Preservation.

It appears to be virtually impossible to move the wreckage en mass and restoration would be out of the question. There was concern that it may go the way of much of Washaway Beach and be washed out to sea.

In James A. Gibbs book, "Graveyard of the Pacific," he chronicles the demise of the Canadian Exporter. Unseasonable fog caused the cargo ship to miss the entrance to Willapa Bay and when the fog lifted the tug Wallula and salvage steamer Algerine tried to pry it from the sands of Washaway Beach.

As early as the next morning the Canadian Exporter showed signs of breaking up and indeed the 100-foot ship that was going from Vancouver, B.C. to Portland, Ore. when the mishap occurred did split in two according to Gibbs' report. H.R. McMillan and Percy Sills from British Columbia purchased the salvage rights to the vessel, but by October the U.S. Coast Guard wouldn't allow anyone near the wreckage because of treacherous surf conditions and blustery weather.

Eventually lumber from wreckage was sold for $17,500, but McMillan and Sills still suffered a $4,500 loss on their venture, a substantial amount of money in the early 1920s. A chair and photos of the Canadian Exporter can be found in South Bend's Pacific County Museum at 1008 West Robert Bush Drive.

Gibbs' book shows the Exporter was a steel-hulled ship, calling into question whether the wooden wreckage has been correctly indentified thus far. It is possible the metal hull was removed during earlier salvage operations, however.

Lyn Hayes, operations director for Westport Maritime Museum, asserted Monday that all evidence points to the ship found at Washaway Beach last week is indeed a 100-foot-long section of the Canadian Exporter.

"As far as we know the wreckage is the Canadian Exporter," he said. "It seems to resurface every several years or so. The last time it was visible was 17 years ago."

States with the most conservatives