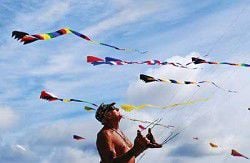 <I>DAMIAN?MULINIX/Chinook Observer</I><BR>Amongst the varied colored kites that populated the skies along the Bolstad beach approach, multi-kite flyer Ray Bethell manuevers his kites over the festival. 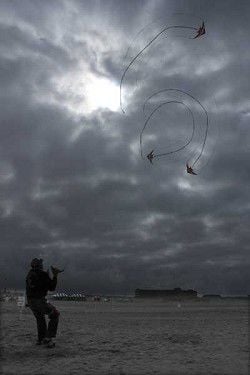 <I>MADDIE?DICKERSON/Chinook Observer</I><BR>At the age of 83, Ray Bethell gets his kicks from flying not just one kite but three at the same time.

<I>DAMIAN?MULINIX/Chinook Observer</I><BR>Amongst the varied colored kites that populated the skies along the Bolstad beach approach, multi-kite flyer Ray Bethell manuevers his kites over the festival.

<I>MADDIE?DICKERSON/Chinook Observer</I><BR>At the age of 83, Ray Bethell gets his kicks from flying not just one kite but three at the same time.

LONG BEACH - "This is my 29th visit to Long Beach for the World Kite Festival and I have loved them all," Ray Bethell says as he deftly maneuvers three "heavy wind" Kestrel kites in Long Beach Wednesday afternoon. The 83 years young Bethell has been invited to be a featured flyer at 17 different international kite festivals worldwide during his career that began in 1980, one year before the Washington State International Kite Festival (WSIKF) began.

Bethell is from Vancouver, B.C., and is known as the world's premier multiple kite flyer even though he says with his ever-present wide smile, "I'm hoping to be 84 next spring." In 2003 at the WSIKF he flew a world record 39 kites simultaneously and he holds 11 other multiple-kite flying world records. Bethell grasped sturdy home-made wooden handles as he coordinated the three kites with tails 30 feet long in a complex, yet graceful ballet in the sky just a few yards from the Pacific Ocean.

He is a craftsman by profession and develops and manufactures his own handles and kites from wood and graphite and he finds just the right material for the lines and the bodies of the kites. Bethell began by flying a pair of kites in 1984 and it wasn't long before he was flying three, with one tethered to his waist and the other two controlled by each hand.

He has received perfect "10" and perfect "100" scores in international competition and is the only person to have achieved either of those scores in those events even as he has approached the age of 80. The jovial, yet intense Bethell says, "I am three days younger than Santa Claus and he's three days older than I." He calls everyone "mate" and when he shakes hands he then clasps yours in his powerful fist and finishes with a happy "thumbs up" gesture.

"I try to do things with my kites that have never been done before in front of an audience," Bethell relates. At a festival in United Kingdom in 1996 he flew his three kites while standing on the footrests of a moving motorcycle. During the 2003 WSIKF he stopped traffic at high noon on Main Street in Long Beach when, escorted by police cars, he flew his three kites from the back of a red convertible. He often flies his kites blindfolded. "It is more juggling than flying, but the spectators love it."

In 2005 he made a multiple kite flying video called "Good Stuff." His clip won best short film in the New York City Tribeca Film Festival that year. At age 67 he flew his three kites for 12 hours and 12 minutes, for yet another world record. When asked how he went to the bathroom during the record-breaking effort, Bethell laughs, "Just like everyone else. I'm no different."

Ray Bethell may not be different, but he is very much a special person. Telling him to "go fly a kite" is like telling Michelangelo to paint your ceiling or Mozart to make some sounds. For more information on Bethell, on how to fly multiple kites and a plethora of other "good stuff," go to his website, (www.raybethell.com).