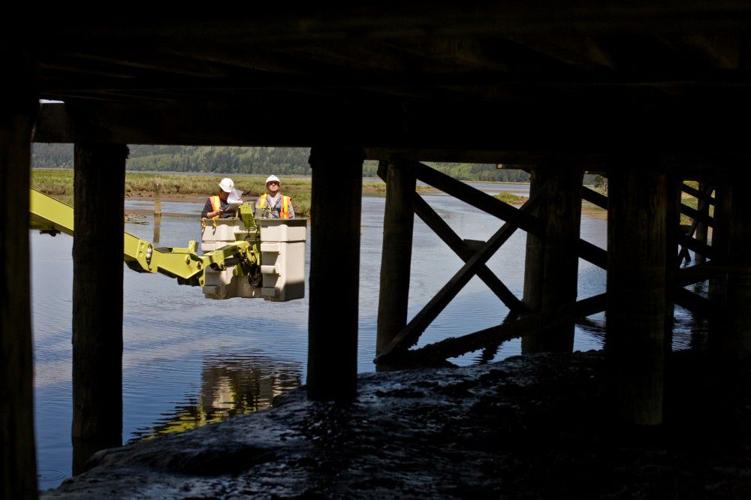 <p>Using an under bridge inspection truck, a WSDOT?crew examines the pylons of a slough bridge on the Willapa Bay Monday.</p> 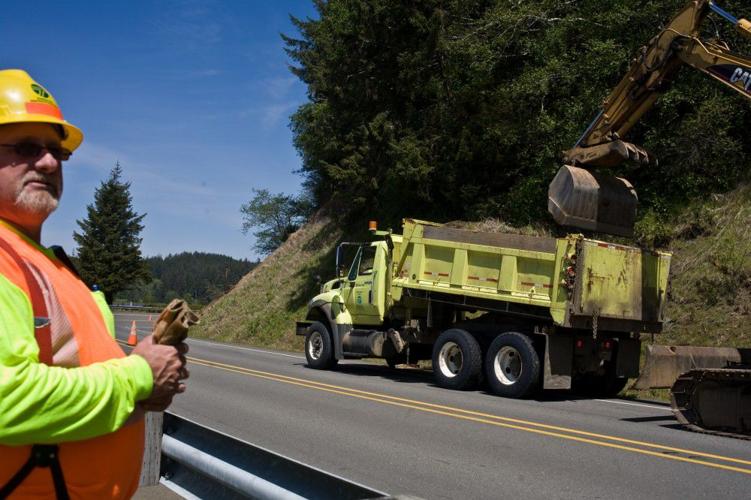 <p>Spring is a time to catch up on problem areas created in the winter, like landslides.</p>

<p>Using an under bridge inspection truck, a WSDOT?crew examines the pylons of a slough bridge on the Willapa Bay Monday.</p>

<p>Spring is a time to catch up on problem areas created in the winter, like landslides.</p>

NASELLE  After coming up through the Washington State Department of Transportation ranks at various places around the state, Charley Hazen feels hes truly home settling in as the new maintenance supervisor at WSDOTs Naselle office.

Hazen, who arrived here from Bingen, took over as supervisor in December following Herb Messicks retirement. He and his crew deal with everything from landslides to bridge inspections in our vast, mountainous county and two others east along the Columbia River.

A WSDOT employee for the past 23 years, Hazen started out on a bridge crew, working his way up from an operator, lead tech and eventually supervisor.

Now, he joins the rest of his family in Pacific County, a place where he has long frequented for hunting and fishing adventures. He and his wife, Linda, are making their home in Naselle, where she raises Chihuahuas and he collects steel traps (he has over 400) and cow bells.

The local crew is assisted by separate WSDOT teams that are responsible for traffic signals, striping projects, and maintenance of bridges, tunnels and overpasses.

With 198 lane miles of coverage, Hazens jurisdiction includes sections in Pacific, Wahkiakum and Cowlitz counties: State Route 4 from Johnsons Landing east to Stella; all of SR 401; U.S. 101 from the Megler Bridge to Johnsons Landing; SR 103; and SR 409.

Everything that happens on this highway is my responsibility, being supervisor, he confirms.

Every day is a new challenge. Every time I think I have everything figured out, a new monkey wrench is tossed in.

One monkey wrench that WSDOT crews tackle on a regular basis is grinding and resurfacing what Hazen calls The Knappton Bump, where earth movement creates a lump under the road east of the Megler Bridge.

To get from point A to point B, we really try to accommodate the public, we really do. Thats our job, Hazen states. But our biggest challenge is environmental  Things just dont happen anymore like it used to. We used to be able to get in there and take a log jam out, but now you cant just go down and pull it out  we have to take photos first.

The environmental challenge he refers to is the process obtaining the proper permits and getting permission from the appropriate wildlife and environmental agencies to ensure that the project will not negatively affect endangered species in the area or that storm water runoff will not impact fish bearing streams. Whether roadside tree limbs are to be cut back or a rock needs to be pulled from a ditch, WSDOT must document and take photos of the conditions and submitted them to the Department of Fish and Wildlife, Army Corps of Engineers and other agencies for approval. Any violations committed by WSDOT could result in fines, depending on the severity of impact.

WSDOT performs culvert inspections and ensures that ditches are properly maintained so that the fill under the road doesnt become saturated with water and erode away. But when it comes to maintaining approach culverts  the culverts between private property and state highways  Hazen says its a task to be done by the property owner.

They had to have gotten an approach permit to put a culvert in  even if its on state right-of-way, that culvert is their responsibility, he confirms. Its the owners responsibility to maintain those, DOT only does the culverts under the road.

Hazen says that due to the states 2013-15 budget for maintenance, citizens can expect to see a lot of chip seal repairs and other temporary fixes (lasting three to five years) than more intensive repairs, such as paver installation (lasting 12 to 15 years). Hazen says when you compare the two options, the temporary repairs are 15 percent of the cost, and he expects paver funding to be allocated to areas along the I-5 corridor.

Money is spent where the population is, so we try to be more efficient and smarter, explains Hazen, noting that chip seals can be beneficial in that they add traction to the road. We need to live within our budget, and I think we do a good job with that.

Since WSDOT has a limited quantity of equipment, areas around the state have to get on a schedule in order to receive the vehicles and machines needed to get the project done. Taking into account the small window of dry weather, paving projects are typically scheduled in July and August. This summer, drivers should anticipate installation of new signage, sidewalk updates around the Ilwaco stoplight, and a full chip seal project on the 100 loop and down to Cape Disappointment State Park.

At a time when legislators are trimming fat from the budget, citizens ask Hazen how the state can afford to fund a roadside destination project, such as Station Camp-Middle Village near the McGowan Church.

A lot of these projects are scheduled far in advance  the money was already appropriated for Station Camp, he explains. A lot of it was federal money, some of it was DOT money, and there was some private funding. And the process of giving back money is harder than you would think.

According to Hazen, the biggest annual expense for WSDOTs Southwest Regions Area 3 is approximately $750,000 that goes toward treating roadways for snow and ice. Within the 120-day winter season in 2011-12, Hazen says his department treated for icy conditions on 52 of those days.

Though the crews dont pre-treat the roads, they closely follow the weather reports in the winter months and monitor the roads day and night to check for ice, snow, debris and slides.

He adds, We have a lot of area to cover in short time. Our goal is to get everything bare and wet in a short time.

Whether using calcium chloride liquid or pre-activated rock salt to melt frost and ice, or plows to clear snow, WSDOT crews fine-tune application rates so that the roads are treated but money and materials arent wasted. Areas of particular emphasis include Bear River Hill, Knappton, Highway 101 around Willapa Bay, curves, hills and sections of road that are in constant shade.

WSDOT crews also keep the right-of-way clear of roadside vegetation that doesnt fall within city jurisdictions. Theyre are also tasked with removing unpermitted items from the right-of-way, such as vehicles for sale or political, real estate, and garage sale signage.

If someone hits a sign, were responsible for allowing the sign to be put there  its called a tort liability, and we want to avoid that, explains Hazen, who stores the signs at his office for retrieval. Were stewards of the roadway and the right-of-way.

Though he says there is a public misconception about the effectiveness of his department, Hazen says WSDOT vehicles are equipped with GPS systems to record where workers go, how long they stay in one place and when the equipment is used. Even when crews appear to be standing still, Hazen says they are usually waiting for an asphalt patch to cool or conducting some on-site planning.

While many associate transportation workers with pilot cars and fluorescent vests, not all road construction-type delays are WSDOT projects. Hazen says the department also issues permits to other agencies in order to work in the road, such as PUDs and other utilities, or contractors who need to install fiber optic cable.

Hazen says they calculate commute times so that lane closures and work zones have the least amount of impact on school bus routes, log truck drivers schedules and other motorists. Crews also take into consideration the forecasted temperatures, precipitation, and any glare that could impair drivers vision.

But no matter the reason for a lane closure or temporary deduction in speed, drivers do get frustrated from time to time, and have been observed exhibiting road rage, driving too closely to machinery, or putting workers in danger by attempting to pass other cars in work zones.

People get really upset when they have to wait in line  theres gestures thrown at us and words vocalized to us, he chuckles. Theyd rather have us work nights or weekends so we dont impact them, and I understand that  But some things are done every year; theres no way to avoid it.

At the end of the day, Hazen says he feels confident that his department spends its dollars wisely, advocates for highway safety, and keeps highways in tip-top shape.

My maintenance crew is the best of the best, he praises. Theyre at the top; they have the best work ethic; they show up to work on time. The crews I work with have made me what I am. I do not make the crews, the crews make me.

Where the rubber meets the road, it sounds like WSDOT workers are working full-throttle.

This graph shows the limits of Trump endorsements in the primaries

Get up-to-the-minute news sent straight to your device.

Submitting this form below will send a message to your email with a link to change your password.

An email message containing instructions on how to reset your password has been sent to the e-mail address listed on your account.