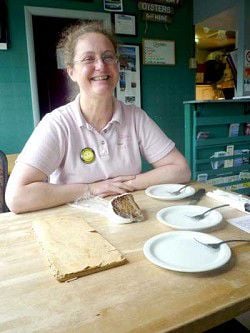 <I>Photos by AMANDA FRINK/Chinook Observer</I><BR>Laurie Carter of the Imperial Schooner checks out a piece of her great-grandmother's delicious old wedding cake. The cake and recipe are pictured left.

<I>Photos by AMANDA FRINK/Chinook Observer</I><BR>Laurie Carter of the Imperial Schooner checks out a piece of her great-grandmother's delicious old wedding cake. The cake and recipe are pictured left.

ILWACO - Laurie Carter of the Imperial Schooner restaurant was radiating with excitement last week as she returned from the post office.

You see, instead of bills or junk mail, Carter carried home a cardboard box mailed from relatives in Ontario, Canada. Inside the box was a note from her cousin, Kathleen Botting Pletsch, and a piece of her daughter Laura's wedding cake.

Laurie and Kathleen found each other back in 2006 while they were researching genealogy on the Internet.

What made the nondescript package so special is that the wedding cake was made from a 118-year-old fruitcake recipe written by Carter's great-grandmother. In Canada, wedding cakes are commonly made from fruitcake and covered with marzipan.

Laurie says she grew up in an ancestral home in Spokane, where she remembers seeing an aged notebook in the kitchen. As a youth, she didn't know what the book was for or why it was there. But as an adult, she discovered that the notebook was a handwritten cookbook created by her great-grandma, Margaret Ryan Mitchell, who was born in 1836 and moved to Spokane in the early 1900s.

Among the frail pages of the cookbook were recipes for mustard pickles, beer, pies and even wallpaper cleaner. At the bottom of one page is an entry dated March 1892 - her fruitcake recipe, titled "Wedding cake." Laurie shared the recipe with Kathleen.

Though the ingredient measurements aren't exactly clear, Kathleen and her mother, Ruth Harris Botting, were able to decipher the recipe so that it could be served at Laura's wedding recently. Now the fruitcake recipe has survived six generations.

This isn't the first time Margaret's cookbook has received attention. The small notebook was part of the "Key Ingredients: America by Food" exhibition at the Columbia-Pacific Heritage Museum last fall.

'What research did you do?': Brown presses GOP lawmaker on election fraud claims

Learn more about the heroic officer who distracted rioters