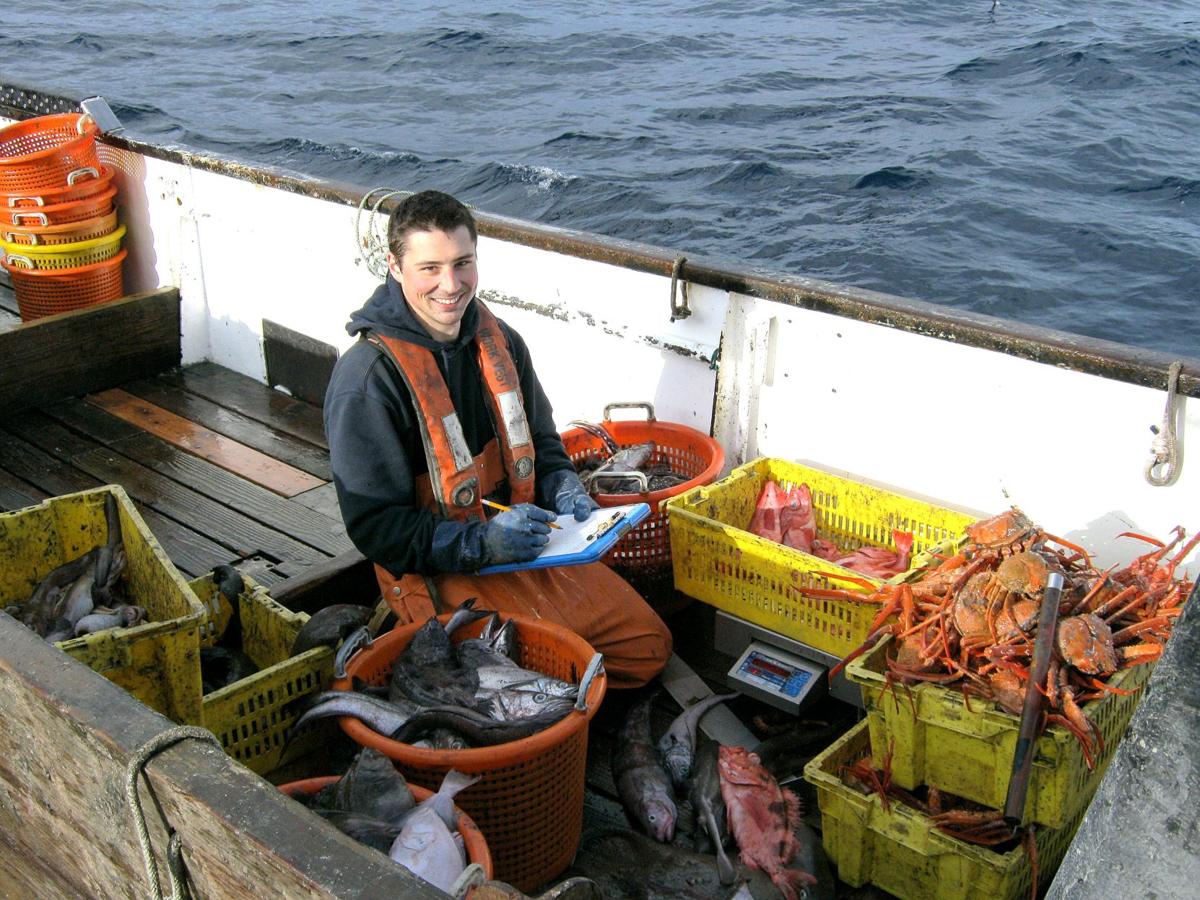 NOAA PHOTOSean Sullivan, a biologist and federal fisheries observer, checks a catch. Although fishermen object to bearing part of the expense of the program, it is partially credited with helping return a number of West Coast fish stocks to healthy harvestable levels. 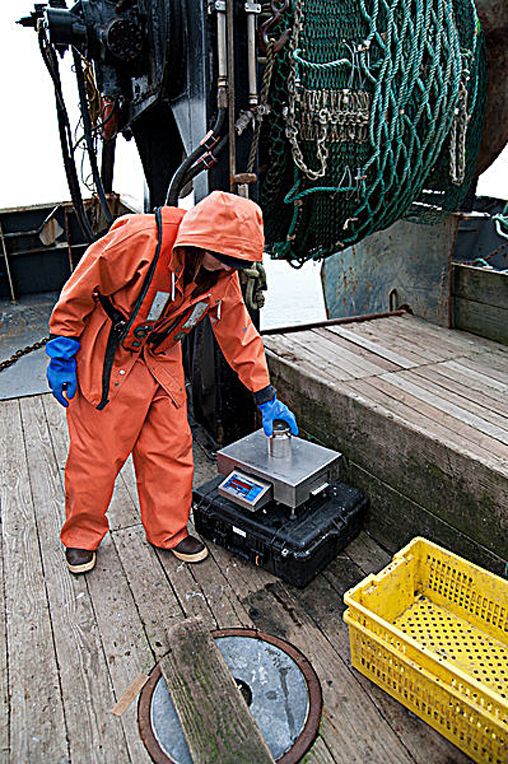 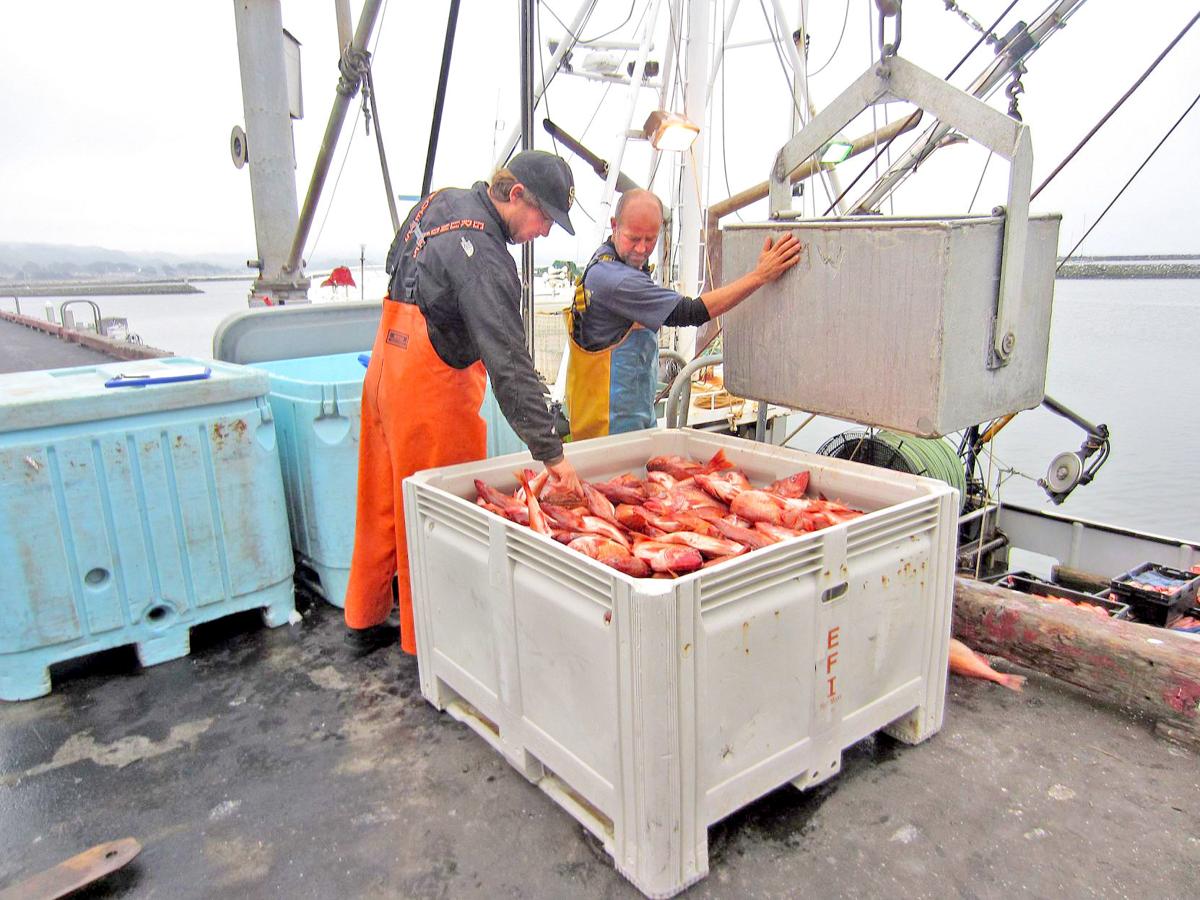 Strict harvest limits and other steps including observers aboard fishing boats are credited with a comparatively quick rebound in groundfish stocks along the West Coast.

NOAA PHOTOSean Sullivan, a biologist and federal fisheries observer, checks a catch. Although fishermen object to bearing part of the expense of the program, it is partially credited with helping return a number of West Coast fish stocks to healthy harvestable levels.

Strict harvest limits and other steps including observers aboard fishing boats are credited with a comparatively quick rebound in groundfish stocks along the West Coast.

PACIFIC OCEAN — In the nearly four years since fishermen in the troubled West Coast groundfish fishery took on catch shares as well as federal observers for every trip, many things have improved while others haven’t changed at all.

The most obvious change has been the quality of the fishery itself.

Not quite a decade after being declared a disaster — overfished and collapsing — the groundfish fishery flipped that diagnosis. This June, following vast and sweeping changes, it was awarded MSC certification, designating it a sustainable and well-managed fishery. It was a sea change those involved in the industry and in conservation efforts attribute to the implementation of the catch share program which divided the total allowable catch into separate shares controlled by individual as well as groups of fishermen.

Brad Pettinger, director of the Oregon Trawl Commission, called the MSC certification “a renewal of the social contract that we have with the public.”

But what hasn’t changed is the cost of doing business on the ocean. If anything, costs have gone up with the requirement in the groundfish fishery to have a federal observer aboard for every trip. And while, many vessels and crews are now used to having the observers on board, sorting through bycatch and monitoring the catch,  the potential for conflict still exists. This summer, a deck boss of a groundfish trawler based out of Astoria, Ore., allegedly assaulted an observer and is scheduled for trial next month.

Meanwhile, experiments to replace human observers with electronic monitoring technology could change the face of West Coast fisheries yet again.

Between 80 and 120 observers — biologists who monitor and log a boat’s catch and discard activity — work aboard fishing vessels on the West Coast, covering 15 different fisheries.

“In the very beginning, nobody knew exactly how things were going and there were a lot more situations, trying to figure out where observers stood, where skippers stood and how they worked with the [seafood processing] plants and the boats,” said Sean Sullivan, an observer who was among the first to go through training for the catch shares program in 2010.

But, he said, “All the big stuff worked themselves out really quickly and then it seemed like over time all the observers have kind of picked a stance. Everyone’s kind of gotten on the same track with everything.”

Still, Sullivan added that he tries to avoid situations where he would have to say any variation of, “Well, you have to listen to me! I’m an observer!” Instead, he says he tries to explain how he works to the crew before they get underway. He doesn’t want anything he does to be a surprise to them.

When she boards a vessel, observer Kara Jaenecke will typically ask how the last observer the crew worked with did things. If possible, she wants to continue that same working rhythm, she said.

All the observers The Chinook Observer interviewed said they try to keep in mind that they are guests — contracted by NOAA and required, yes, in both catch share and non-catch share fisheries, but still stepping aboard a place that is not entirely theirs.

Observers and fishermen live in close quarters at sea. There is very little privacy and very little room to hide if there is a clash of personalities aboard, said a former observer who worked in the NOAA program in the early days.

“You try and consolidate and make yourself as small as possible so you don’t infringe too much because you’re walking into their house basically,” said Lane Kester, a federal fisheries observer based out of Astoria. “I always try to walk on as a guest and appreciate the fact that they’re allowing me to, cordially, be on there. They could put up a big stink.”

The costs of not cooperating are high. Richard C. Palek, the deck boss arrested this spring for allegedly assaulting an observer while at sea, faces a federal misdemeanor violation of the Magnuson-Stevens Fishery Conservation Management Act, which besides prohibiting anyone from assaulting, intimidating or sexually harassing an observer also prohibits resisting, opposing, bribing or interfering with a fishery observer. If convicted, Palek could face a fine of up to $100,000 and up to six months in prison.

Observers gather important information — information that literally determines how much fishing can occur and, to some extent, when. In the catch shares fisheries, the paperwork they turn in at the end of each trip reveals how much quota remains and whether certain vessels can continue to fish with the quota allotment they have.

But, NOAA and fisheries managers have long been exploring other options for gathering that same suite of data: everything from simple video camera monitoring to facial recognition technology that could identify species on its own. These electronic monitoring technologies are being tested in a number of escorts, especially in Alaska and off the northeast coast, said Jon McVeigh, NOAA’s observer program manager and a former observer himself.

At the heart of the discussion are questions of money and efficiency.

Electronic monitoring is objective, can work 24 hours a day and doesn’t get seasick. But, say fisheries managers, a camera can’t take into account what it does not see: conversations and interactions happening off camera, the wider context. Still, human labor is not cheap and some fishermen say observer costs, and rising costs of fishing in general, are forcing them out of the fishery entirely.

“The best I can figure from talking to the contractors, it’s costing [fishermen] about $400 a day,” said Brent Paine, executive director with United Catcher Boats a non-profit trade associations representing a number of trawl catcher vessels in Alaska and off the West Coast.

These are costs that some fisheries — whiting, for example — can more easily absorb than others. They hit the groundfish fleet hard, though, Paine said. In addition to observer costs, it also must juggle other fees: a limited entrance fee and a percentage taken to repay a loan under a federal buyback program.

“The cumulative effect of those three fees or taxes can make it very difficult and not knowing what the true costs are going to be on a year to year basis, it sets the staff to make things a little more uncertain,” said Paine.

When the catch shares program for the West Coast groundfish fishery began, NOAA agreed to cushion the spike in observer costs with a federal reimbursement. That reimbursement began in 2011 at around 90 percent, but dropped to 80 percent in 2012 and then to 60 percent in 2013.

“We don’t yet know what the 2014 reimbursement amount will be but it will be lower,” said Michael Milstein, public affairs officer for NOAA, in an e-mail Nov. 20.

“It was never designed to be a permanent reimbursement,” said McVeigh. “The way it was initially set up was to help through the growing pains of the new program … and eventually it would go away.”

NOAA collects economic data for the catch share programs, but the most recent reports only come up through 2011. A draft report for 2012 is in the works.

However, “The Economic Performance of the U.S. Catch Share Programs” released August 2013 shows that as fishermen dropped out or were bought out of fisheries and the number of active vessels decreased, the revenue increased. In the whiting IFQ (individual fishing quota) fishery, revenue per active vessel tripled in 2011, but the number of active fishing vessels had been reduced by a third.

‘I always try to walk on as a guest and appreciate the fact that they’re allowing me to, cordially, be on there. They could put up a big stink.’