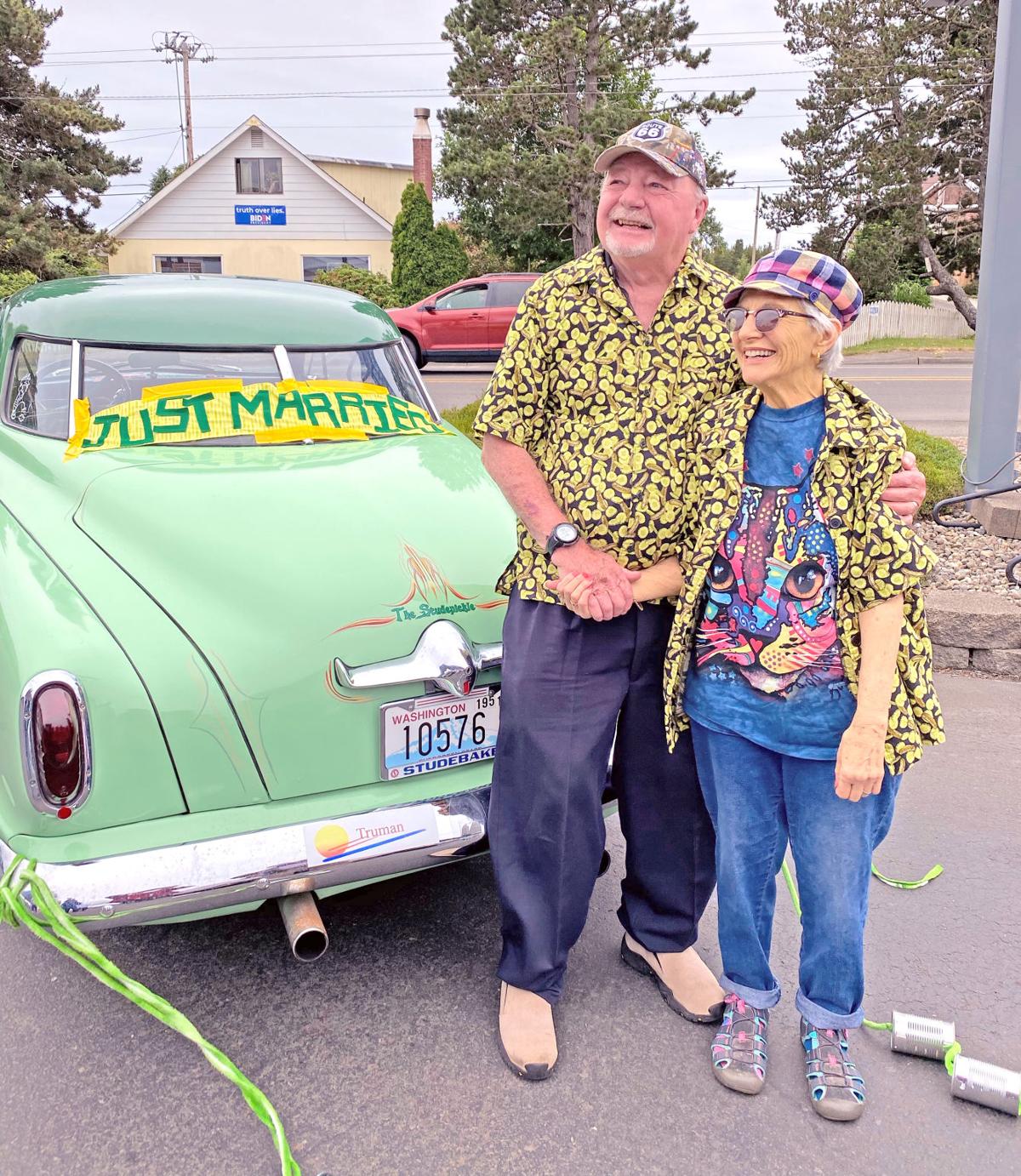 Lovebirds Jon Cox and Vicki Libby married this past weekend after 18 years together. Jon’s “Studepickle” led-off a Beach Barons’ Parade in celebration. 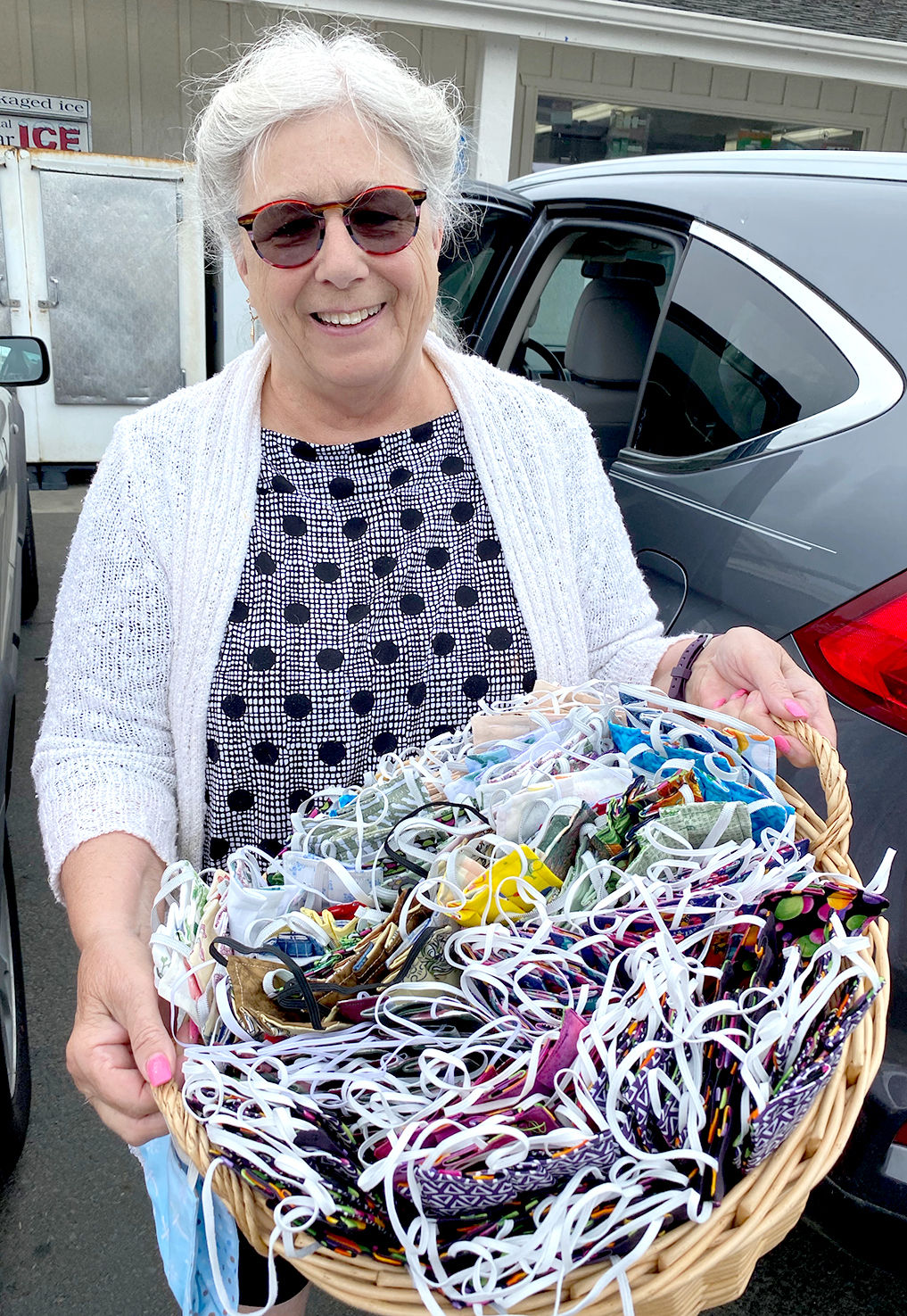 Dixie Cooper, Libby’s sister, arrived at the event with a basket of handmade Covid-19 masks.

These days of covid-19 have been filled with joy, wonder, and dunderheads. For many of us the natural world has been a balm. Now we have time to watch the incremental changes of the seasons: the crocus wilt and the plum blossom plump; the raspberry blooms set to berries; the ceanothus fade and the crocosmia flame up; the apples form and redden.

So it’s not been a joyless time — and, if you’ve found a little pod of friends you feel comfortable with, even outdoor gatherings amid the isolation have provided camaraderie. We’re counting our blessings.

Fireworks on the beach

Unfortunately our idyllic wonderland was cracked open by the appalling decision of our tone-deaf county commissioners, Ilwaco and Long Beach mayors, and our local law enforcement officials who said yes to fireworks on the beach. And this in the midst of the covid-19 issues we’re already suffering through. (The real viral effects of the beach gatherings may not be felt directly by our county, as those who become sick go back to their own corners of the world.)

One of our commissioners wrote me an email in response to my questions about why this was the decision. Every time I read it my blood pressure goes up. I’ll share one little tidbit: “Someone said the State considers the beach a ‘highway.’ Whether that is true or not is above my pay grade. But they do tend to act that way. So, ‘closing the beach’ seems to mean (to the State) ‘close the beach to driving.’”

“Someone said”? We now conduct county business based on rumors and innuendos? You don’t know what’s legal in the county you serve?

I sent this comment to another friend who immediately wrote back, “It took me about thirty key strokes to find out the following on my computer. (And I have no pay grade.) ‘Many people are attracted to Long Beach because they can drive on it. Long Beach is actually an official Washington State highway with a 25 mph speed limit…’” which, I might add, everyone exceeds.

Even the Chinook Observer downplayed this event with its front page headline, “Crowded but not rowdy.” All you had to do was turn to the large photo on the back of the front section to see thousands of cars crowded onto the Boulevard beach approach and on up the beach to imagine the war zones those Long Beach residents must have experienced. Many neighbors I heard from said, “This was the worst Fourth yet.”

I call it a dereliction of duty that our local officials let our community down… again. Yes, the fireworks issue is complicated. Yes, it will take conversations and cooperation from Washington State Parks, State Patrol, and local enforcers to make changes. Maybe we can no longer count on our so-called leaders to have the community’s best interests at heart. Maybe it will take grassroots outrage to catalyze change. I note that our beach is part of the Seashore Conservation Area, including the state’s coastline between Cape Disappointment from the mouth of the Columbia River to Leadbetter Point. Surely the state cannot approve of all the fireworks, camping, cooking, trash, and group detritus that washed out into the ocean on the high tide following this July 4th fiasco. And no one needs an entire week of boom-booms on residential streets.

We either need to go over the heads of our local miscreant “leaders” and appeal to the governor, or vote out this band of dunderheads and vote in a new set of people who aren’t part of the good ol’ boy network, people who aren’t afraid of changing the status quo and listening to local residents and business people. (I don’t recall anyone talking to us about the issue this year.) Two years ago in a survey conducted by the “Not a Ban, a Better Plan” committee (who by the way met nearly every week for three years!), they discovered that even a majority of local business people wanted fewer fireworks days and more regulation and enforcement. ‘Nuf said (for now).

OK, let me step off my soapbox to share another note on “fireworks,” those that hit you squarely in the chest — the fireworks of love.

This all started with Dixie Cooper who’s been an indefatigable maker of Covid masks. Dixie and her quilter band have made upwards of 8,000 cloth masks for Peninsula workers, Senior Center volunteers, and local citizens. At $4 a pop they are a bargain and beautiful besides. (You can purchase one at the Senior Center, Adelaide’s, and Bay Gallery, among other locations.)

When I called Dixie last Saturday to talk about masks, she couldn’t help but tell me about what was happening later that same day. “It’s a special story — my sister, Vicki Libby, was diagnosed with an aggressive and terminal cancer last Friday. This is huge for our family of course. Vicki’s a nurse and took blood pressure at the Senior Center for years. She’s helped so many families with hospice care. She’s kept up her nursing expertise — Nurse Lulu we call her. Anyway, since she got the diagnosis she’s been trying to do something special every day and just a couple days ago she and her long time partner Jon Cox said to each other, at exactly the same moment, “Should we. . .get married?” They both said, yes!

As Jon says, “It only took us 18 years!” Jon, a long time Beach Baron, first called his old police buddy, Tom Cleary, from Portland with the news, hoping he could marry them. Tom got the call Friday afternoon and hot-footed it to the Peninsula for a Saturday wedding ceremony. As Tom said, “I dropped everything. If Jon needs me I’m here. We’ve known each other for a long time. I’m a prosecutor and I was assigned to the police department in southeast Portland and assigned to Jon who got assigned to make a lawyer a cop!”

Jon and Vicki tied the knot at noon on Saturday. According to Tom, “They did great!” Because of the virus, these lovebirds couldn’t have a big celebration, but the Beach Barons took care of that. Starting around 2:30 Saturday afternoon, classic cars started arriving and parking in the Pioneer Market lot, all waiting for the newly-weds.

Jon and Vicki arrived a little after 3 p.m. Jon pulled two strings of tin cans out of the trunk of his famous “Studepickle” and, after a few photos, they pulled out onto the front road followed by a parade of classics: (I’m indebted to Beach Baron president Joe Natoli for cueing me in on this): ‘38 La Salle, a bright red ‘66 Chevy Nova, ‘37 Chevy truck, ’66 orchid Impala Super Sport, ’50 Buick, ’40 Chevy, ’72 Ford truck, a deep blue ’64 Ford Falcon,’63 Split Window Coupe, an early ‘90s Crew Cab Dually, a red ’64 Volkswagen Bug (famous for wearing antlers and being Rudolph in a Christmas parade), a ’64 Thunderbird, a couple Camaros, and a ’31 Model A. (I hope I didn’t blow this too badly, Joe.)

Off went the parade of friends — or, as Joe said, “This is their Honeymoon!” — down to the Long Beach approach, looping back up Sandridge and ending again at Pioneer. The bride wore a crazy green pickle shirt, a psychedelic cat T-shirt with multicolored Keen sport sandals; and the groom was a dandy in matching pickle shirt, a Route 66 baseball cap, and hushpuppies. They beamed while the paparazzi popped pics.

These days have been difficult, full of divisiveness, tomfoolery, and trepidation. I can barely describe how full of love this scene with Jon and Vicki was. Our hearts were bursting, star-spangled.