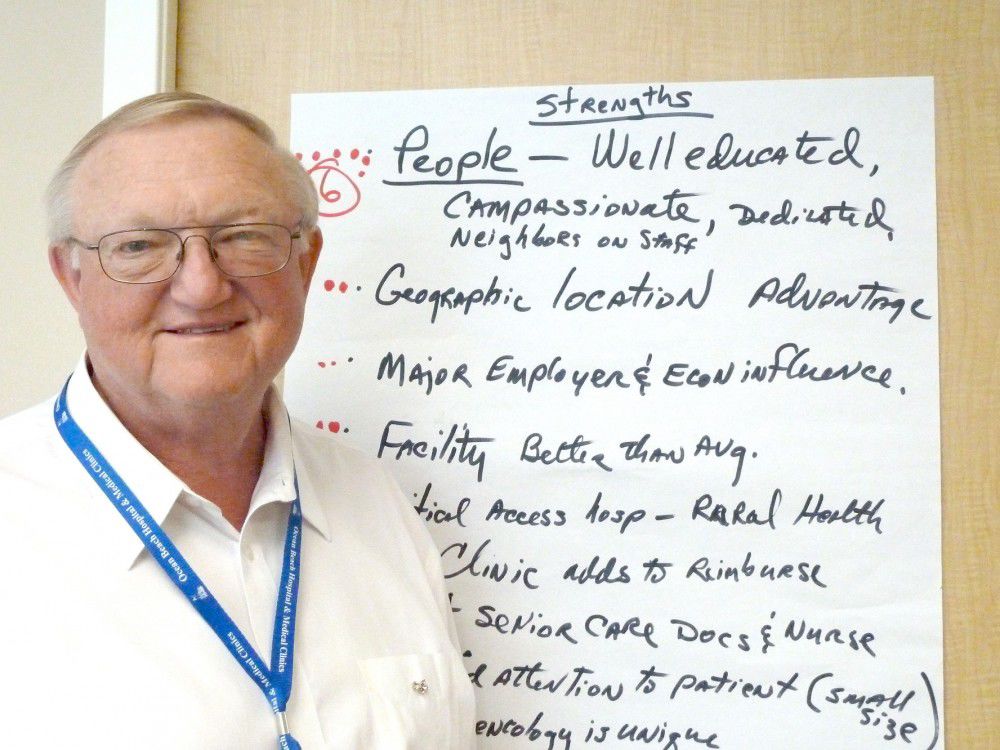 <p>Ocean Beach Hospital Interim CEO Terry Finklein stands next to a listing of strengths for our hospital — “People” gets the top vote.</p><p></p> 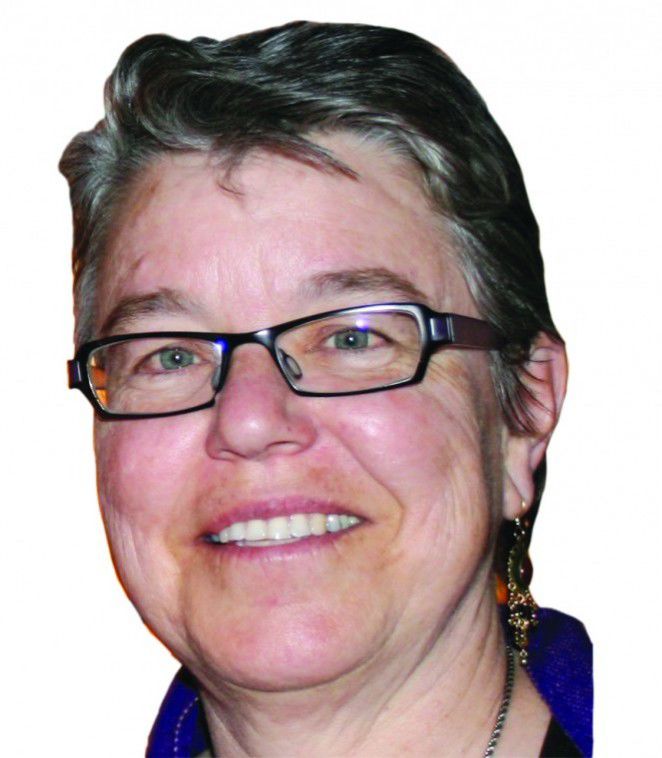 <p>Ocean Beach Hospital Interim CEO Terry Finklein stands next to a listing of strengths for our hospital — “People” gets the top vote.</p><p></p>

Were going in the right direction.

Thats how Finklein, interim CEO and turn-around steward for the Ocean Beach Hospital (OBH), summed up his work so far. We had a chance to talk on a grey Monday morning in his corner office where I notice a pile of flip chart pages with various headings and bullets  the sure sign of a business meeting.

Yes, we just completed a SWOT analysis [an acronym for a standard business planning process that identifies strengths, weaknesses, opportunities and threats] and these are the results of our session, said Finklein. Were basically trying to reinvent the organization  set some priorities and reevaluate our mission, vision and values.

Key OBH staff including Terry and Linda Kaino spent part of their Saturday in a strategic planning session facilitated by Dennis Long, Bank of the Pacific CEO and president.

Our key strength is our people. We have highly qualified licensed professionals. The community is showing a great deal of loyalty and support for the hospital and its success. I can say that our medical staff is very solid and willing to do whats necessary to make the hospital succeed. And the board has been thoroughly engaged.

The facility is great, he continues. Its well-maintained and the new portion of the facility is outstanding. I know this for a fact as I wrote an article about OBH for the Sustainable Business Journal the first year I moved to the Peninsula. OBH was one of the first Pacific Northwest rural hospitals to incorporate green-design features like natural lighting and people-friendly spaces.

Everybody Ive talked to in the community has voiced their support and the need to keep quality healthcare delivery here on the Peninsula. The support has been remarkable, Finklein said.

On the other side of the ledger, The weakness are financial. We just need to have a more focused and methodological approach to financial management and strategies to maintain a strong financial base. Another weakness has been in the stability [or instability] of management.

As a way to stop the financial bloodletting, seven OBH managers were let go around April 10, just weeks after Finklein took over as interim CEO March 13 in the wake of Joe Devins firing. Finkleins philosophy was get it done and get it over with so we can start building for the future.

One of those managers was Suzanne Staples who was in charge of quality control. Sue was one of those highly-skilled quality individuals, very motivated. I just felt that it was time to make difficult decisions about staffing. I needed to look at what could be absorbed by other positions and make the cuts deep and one time only.

Julie Oakes picked up the medical quality assurance task; and hospital quality care, control and improvement is now being coordinated by Kaino, although, as Finklein said, thats the job of everybody in the hospital.

Another area where Finklein is looking to cut costs is in contracted services.

Ive been looking at contracts we have for a lot of different services, said Finklein, everything from online policies and procedures, online educational programs, and different operational contracts weve had with our vendors and providers. Im reevaluating them on a one-by-one basis, and if in my opinion they dont benefit the hospital, they might require renegotiation or termination in collaboration with the board.

Its not uncommon for hospitals to contract for emergency physician services, for instance. This has been the case for every hospital Ive worked with.

We guarantee Emcare physicians a salary for the month and if we dont generate the business, we subsidize that agreement. We do benefit financially for the technical component, for whatever we generate on the hospital portion of that bill; but we dont benefit on the physician side.

Its a great program in terms of providing board-certified physicians. That has been one of our primary areas of focus  providing high quality emergency and urgent care. Finklein estimates that OBH gets roughly 408 emergency room visits a month.

Finklein was actually brought into the OBH story first as a consultant to review the situation and give the board suggestions about reparative measures. Then, months later, in March he received a call from board chair Darren Thorsen asking if he would step in as interim CEO.

I was not looking for a job. I was enjoying retirement, said Finklein. My background is in clinical pharmacy [meaning pharmacology for institutions]. I graduated in the first class of clinical pharmacists at the University of Washington. Then my fifth year I was with medical students and residents. I got a great education and I came out being Joe Clinical. That was my love.

My career initially was working in a hospital or institutional setting and focusing on consultative services and expanding clinical roles for pharmacists. I had the opportunity to become the director of pharmacology at Southwest Washington Medical Center in Vancouver, originally St. Josephs Community Hospital. My job kept changing every two years and I ended up as senior vice president and site administrator of Vancouver Memorial Hospital. Then I had the opportunity to be CEO.

How did Finklein get to Columbia Memorial in Astoria? Well, I like to fish and I was actually in a boat at Buoy ten when I got a call from a friend telling me that Columbia was looking for a CEO. I got the job. My wife Christine and I thought wed stay for three to five years, max. That was in 1989. The community was wonderful and though I had other opportunities nothing was sufficient to pull me away. I was CEO for 20 years.

The Finkleins had another opportunity to experience local community when daughter Dianne Marie died of an embolism while at Oregon State University. It was a terrible loss and the community outpouring was tremendous  I dont even have words for it. It was pretty powerful to see how many lives Dianne had impacted in 26 years of life.

The family has set up a scholarship fund that awards one to four scholarships a year to OSU students studying student services, Diannes field. She was living and supervising Sackett Hall when she died. The couples son Mike and daughter-in-law Trisha live with their three children in Seattle.

On succession plans, Finklein says, Ill stay as long as is necessary but Im hoping to transition [to a new CEO solution] by the end of the year, or perhaps as soon as the end of the summer. Finklein mentions several possibilities from hiring a hospital administrative management firm like Brim or Quorum to finding a qualified CEO, though he admits that with the current state of the hospital this could be a challenge.

Finklein also feels that there is great opportunity to be found in collaboration with Columbia Memorial, OHSU and PeaceHealth (a system of regional coastal hospitals). As for his general philosophy, he says, Everybody should be entitled to healthcare, at any stage of life, without worrying about whether they can afford it.

When Finkleins job at the hospital is completed, he says, Id like to get back to fishing and golf, traveling and spending time with family and friends. My life is truly family-focused.