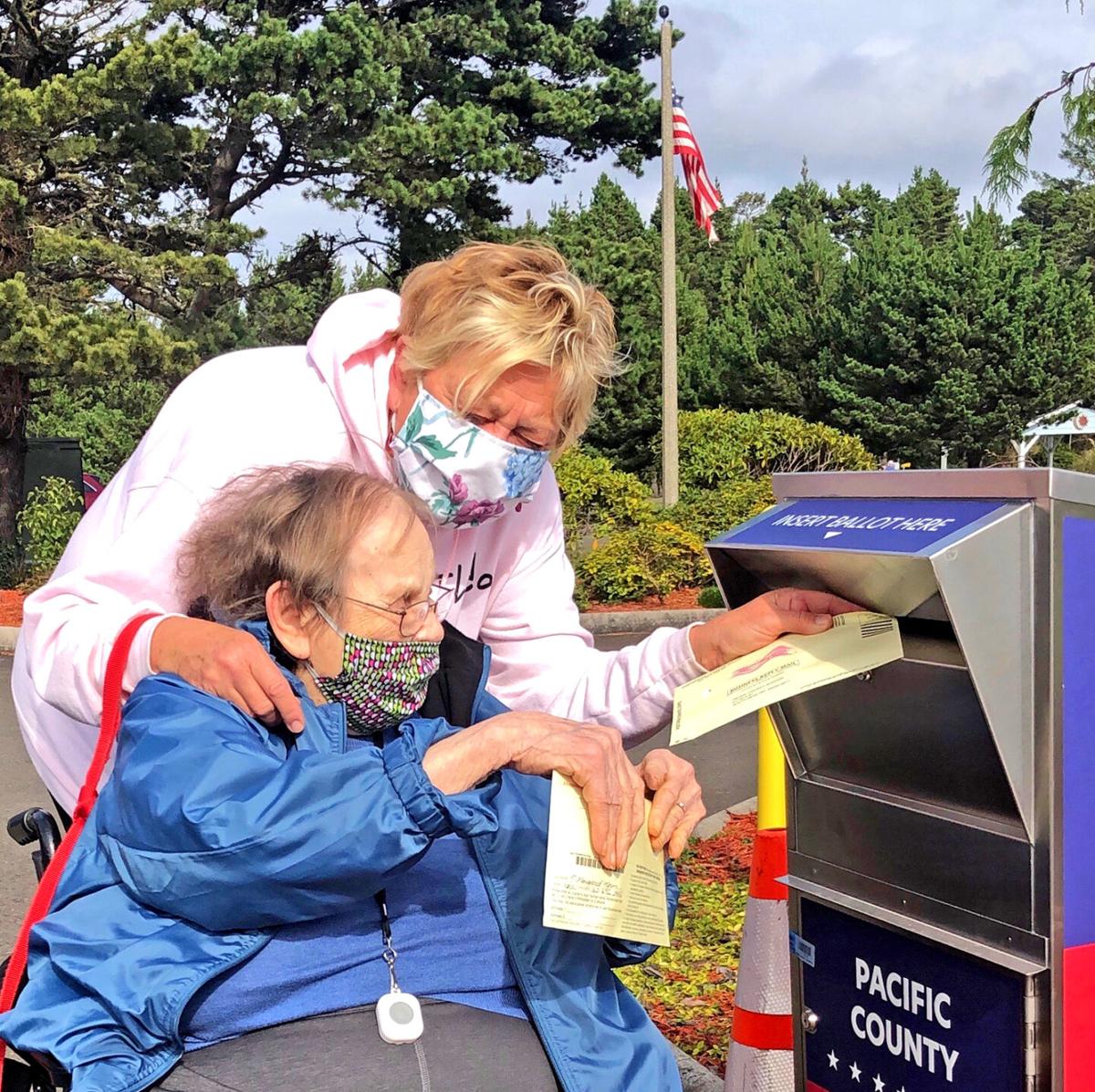 Nanci Main and her mother Margaret Main put their ballots into the Senior Center ballot box installed across from Golden Sands. 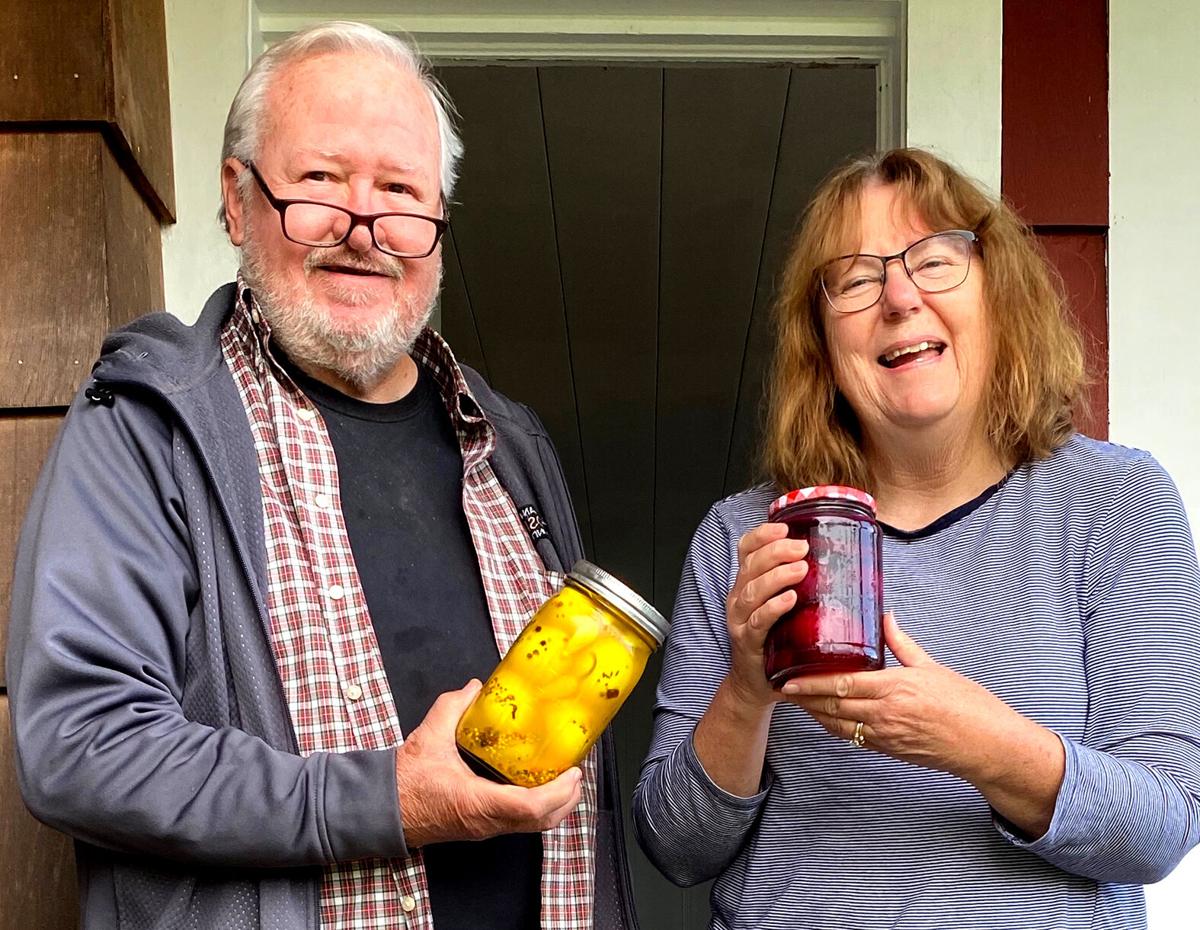 E. Margaret Main, resident of Golden Sands in Klipsan, arrived on the Peninsula in 2016 from her home of 66 years in Castro Valley, California. Daughter Nanci Main remembers that the first thing she requested was “to get registered to vote at her new address.” As Nanci says, “My mom was born in 1925 and her family of nine went through the Depression and WWII together. She remembers that all seven kids, especially the boys, got whatever jobs they could during the Depression — caddie at a golf course, helping neighbors — and at the end of the day they put the money they’d earned in the middle of the dining room table and that’s what the family lived on.”

“Mom was born on February 1st and the story goes that her father, a huge 6’4” policeman, wrapped her up in a blanket and went door-to-door to all the neighbors showing off his one-day-old daughter in the middle of a brutal Flint, Michigan winter. She and her younger sister Helen grew up sleeping on the living room couch because they had only two bedrooms and the five boys had one. She had one drawer for her things.”

A lifelong Republican, Margaret respects the sanctity of the American voting traditions. Nanci continues, “She feels really strongly about voting. She and my father taught me to value and respect the privilege of voting because dad went through WWII and he talked about how many people died and suffered in order for us to be able to vote. I grew up with that — voting was a sacred act in our family.”

“Even though mom is 95, she watches the news and we have a lot of conversations. She’s a practicing Christian — we sing hymns together and we read the Bible — so when she hears about children in cages, or what’s happening to minorities, she says, ‘I can’t believe a president would do this. How can anyone be so unkind?’ Recently she said, ‘I can’t vote for somebody who’s doing these kinds of things to my country.’ She’s proud of the fact that she voted for Joe Biden this year.’”

“When I think what it took for her to change parties — it was a big move. I was proud to vote along side my mom this year. We put our ballots in the Senior Center drop box together. Mom’s hands were on her own ballot as she put it in that ballot box. I wanted her to feel that much empowerment — she’s lost so much, she can’t see very well, she’s not able to have friends visit, she’s in a wheelchair. She’s seen a lot of presidents come and go. This year means a lot to her.”

I want to thank Margaret for her commitment to making her voice heard. My hope is that we’ve all taken our civic responsibility to vote as seriously as Margaret Main has this year. And anyone, from local officials to members of the Supreme Court, who want to sully that privilege by not counting every single one of our votes is, in my opinion, not a true American.

As I write this, we’ve got only a few more days until election night, though whether it’s a blow-out so big that a winner can be called, or whether we’ll have more painful weeks of courtroom shenanigans is still up in the air. We’ve made it through nearly four years of chaos and outrage, and most friends I know simply want it to be over. The other thing I’m hearing from folks is either, “No, I have no intention of watching the news on election night:” (basically the pillow-over-the-head approach) or “I will be with a small group of friends and alcohol will be involved:” (the dull-the-nerves, that’s-all-I-can-think-to-do methodology). Nonetheless, left or right, we’re all going to be a bundle of nerves on Nov. 3.

Like many others, to calm myself in these last weeks, I’ve become more of a homebody than I ever in my life anticipated: right down to sourdough starter in the fridge to having both garlic and onions sets for my garden (if my yard can still qualify as a “garden” and not merely a plant hospice center). I’ve also fallen back to some favorite family recipes as a soothing device: one of which is the lovely “Gabley” Pennsylvania Dutch tradition of red beet eggs.

Pickling is a country tradition — a way to make precious eggs last longer. In fact, one online site says pickled eggs can last three to four months. (I’m doubtful, although Hunan century-eggs last, well, longer.) Once they’re cured properly, red beet eggs in our family never lasted more than a day because they’re so delicious. And even waiting that two or three days for proper curing is excruciatingly hard.

The recipe we use came from my grandmother on my dad’s side of the family. There are five or more generations of Gables mostly all in a tight circle around New Oxford, Pennsylvania, Adams County (where there are 119 registered Democrats, and 159 Republicans — we don’t talk about politics). The recipe is simple and scrumptious.

First clean fresh beets and put them in water on the stove. (You don’t need to peel them — the peels will come off if you rub them in your hands after they’re boiled). Then put eggs in to boil, but not too hard or when they’re pickled they’ll be rubbery. Cool and peel your eggs and put them in a big jar. Then when the beets are cooked and peeled, slice them. Add one cup of the beet-water to one cup of sugar and three cups of apple cider vinegar. Put back on the stove just until the sugar is completely dissolved. Pack in your sliced beets on top of the eggs (otherwise the eggs will tend to float up) and pour over the pickling liquid while it’s still hot. Now the hard part — wait three days!

The perfect red beet eggs have that glorious red color just up to but not into the yolks. And the taste? — I truly do not know how to adequately describe it. You’ll just have to try them.

Friends Phil and Nancy Allen just delivered to me spicy pepper eggs based on a recipe from Joe Jost’s Tavern in that other Long Beach (California). Joe Jost’s was founded in 1924 and is one of the oldest continually operated taverns west of the Mississippi River (https://joejosts.com). Joe’s recipe is more complicated than my down home red beet eggs. If you’d like it, email me at categable@aim.com and I’ll send it along. Put “pickled” in the subject line.

However, there’s a different kind of pickling some of us may be looking for on election night. I’m not advocating drinking and driving, nor overdoing of any kind, but one good cold Cosmopolitan, a dry martini with olives, or a simple G & T might be in order. I’m not sure Margaret would approve, but I think she would forgive us.