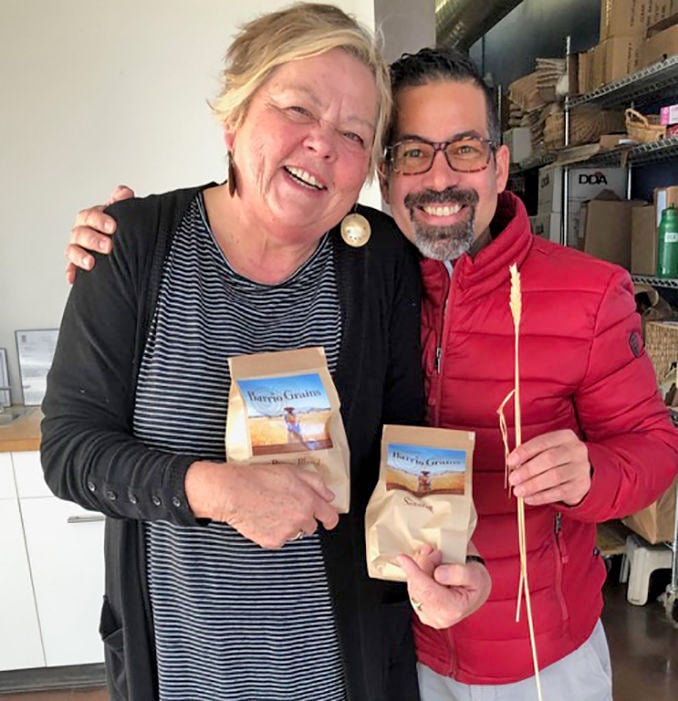 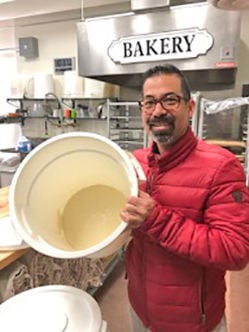 Don shows off his sourdough ‘mother starter” which, in 24 hours, will fill this plastic tub.

Don shows off his sourdough ‘mother starter” which, in 24 hours, will fill this plastic tub.

It’s a cold morning in Tucson, and I’ve been in line for 30 minutes waiting for the door of Barrio Bread to open. There are probably 50 people in line behind me with more arriving. We are chatting with each other, sipping hot coffee (if we’ve done this before and know the routine), and comparing notes on which breads we’ll be taking home.

I’m totally in love with jalapeño cheddar, but the Tucson native I’m standing next to says, “Cranberry walnut is my favorite.” The fellow in front of us is calling his neighbor, “I’m at Barrio Bread — should I pick up a loaf of rye for you? Or a couple seeded Cubano rolls?”

Conversation fragments waft to us from the line: “I want olive bread… should we get four loaves?” “How long do you think the line will take? — I’m going to be late for work.” An older fellow drives up in a truck, looks at the line and says, “Can’t do it…” But us stalwart devotees know the wait is worth it. The door opens promptly at 9 a.m. and people start drifting by with brown paper bags full of loaves just out of the oven.

When I get to the front of the line, there’s the owner/baker Don Guerra himself, putting baguettes from the riser into the Polin oven and scoring them before closing the door. He’s been up since 2 a.m. and tells me about the rest of his day. “We’ll sell out soon, probably, then I’ll go home and take a nap, visit with my kids, then I’m taking my son to a basketball game tonight. I’m calling this not ‘life balance’ but ‘harmony’ because it’s never really balanced.” Though part of what I’m impressed by is that Don has created a magnificently successful business and still manages to have a life.

Tour with the master

Yesterday, I was fortunate enough to get a tour of the bakery. Don came in on his day off to meet our own baking-luminary Nanci Main (she was visiting Tucson for a little R&R). Nanci and Don bonded immediately because they both understand that bread is not just something to eat — it’s a metaphor for nourishment, for community, for open-heartedness. When you put a warm loaf of bread in someone’s hands, you’re sharing with them part of yourself and part of the earth. This concept is even more apparent when you walk around with Don behind the scenes.

As Don says, “When people first started coming in for my bread they weren’t necessarily thinking about what goes into it. The grains were an afterthought. But now we’re becoming more interested in the revival of local grain economies.”

“White Sonoran is the first grain we revived — traced back to Father Kino in the 1690s. [Father Eusebio Francisco Kino, 1645-1711, was a Spanish Jesuit missionary and an early Spanish explorer of the Southwest.] We received a sustainable education grant that allowed us to find the seeds and plant four acres of this wheat. Then people said, ‘What do we do with it?’ and I said, ‘I’ll make bread.’ We tried it and, wow, it worked! This grain hadn’t been around or used in baking since the ‘50s.”

From that first glimmering potentiality for the revival and use of regional grains, Don and his compadres — botanists, farmers, milners and bakers — created not a “supply chain” as it’s called in an industrial process, but a “grain chain.”

White Sonoran wheat was a start and served as a model for how the process from seed, to grain, to milling, to baking could work; but as Don said, “White Sonoran is a soft wheat, but it’s not right for everything — we needed hard grains too. All grains are different; they have different expression, functions, applications, and flavors. So I encouraged more experimentation and now we have eight different varieties of regional wheat.”

“We’ve continued to push what we do, to develop food products based on what grows locally and to help stimulate other businesses to take an interest and get the community involved to leverage their support. We’re hoping more locals can buy flour from me and other retailers instead of going to the grocery store for out-of-state products.”

Nanci asked about the nutritional aspects of Don’s bread. “Well, the first thing is buying local — that’s a big deal because you’re eating what’s in the soil that’s around you. And it’s all fresh milled. Some grocery flours from out of state sit in warehouses for months or who knows how long. So with fresh milled and local grown grains used in my process of slow acidification — a sourdough basically — you get a breakdown of the proteins and starches, which makes it low-glycemic and low-gluten. Supermarket bread gives people a lot of irritation because it’s not broken down. My bread is more easily digested. I have gluten-intolerant people who haven’t eaten bread for 10 years who are eating my bread and saying, ‘You changed my life!’”

“What makes this possible is the grain and the slow fermentation — here’s my ‘mother starter.’” Don opens a plastic tub to show us and we peer into its very bubbly bottom. “By tomorrow morning this will be up to the top of the tub. With 500 grams I can build 40 kilos in 16 hours because these microbes have an appetite for starch.”

Nanci marvels at the ‘mother.’ “I had one at the Ark that was a 100 years old and then an employee forgot to feed it. But that’s another story. What you’re doing… well, your time has come. People are stepping into an awareness of local and organic. And you’re such an articulate spokesperson for the process.”

“This has been my life for the last 10 years,” Don says, “ — this is what I’ve done with my life.” He is speaking around the world now on the “grain chain” process he’s helped to create. In fact, this summer he’ll be speaking in Bellingham in conjunction with a Washington State University interest in reviving our local wheat products.

Nanci suggested I call chef Jerilyn Brusseau who might know about this Washington state grain movement, so I picked up my cell phone — only to find her on the other end of the line in Vietnam! (You might remember I spoke about her founding of PeaceTrees Vietnam in my column a couple weeks ago.) “Oh yes, there is a big movement for revival grains in Washington,” Jerilyn said. “Take a look at the Cascadia Grains Conference coming up this month in Olympia (https://www.cascadiagrains.com/about-us). I’ll bet this is an outgrowth of the Bread Lab in Skagit County (http://thebreadlab.wsu.edu) and a stone grinding mill in Burlington. We need to talk!”

So the Southwest / Northwest connection continues, and it’s not just about snowbirding. The fertile and dry eastern part of our state — all that beautiful Horse Heaven Hills country — is similar to the wheat growing fields of Pima County. It makes sense that there would be local partnerships with the work Don is doing in Tucson. (Stay tuned for other food partnership stories.)