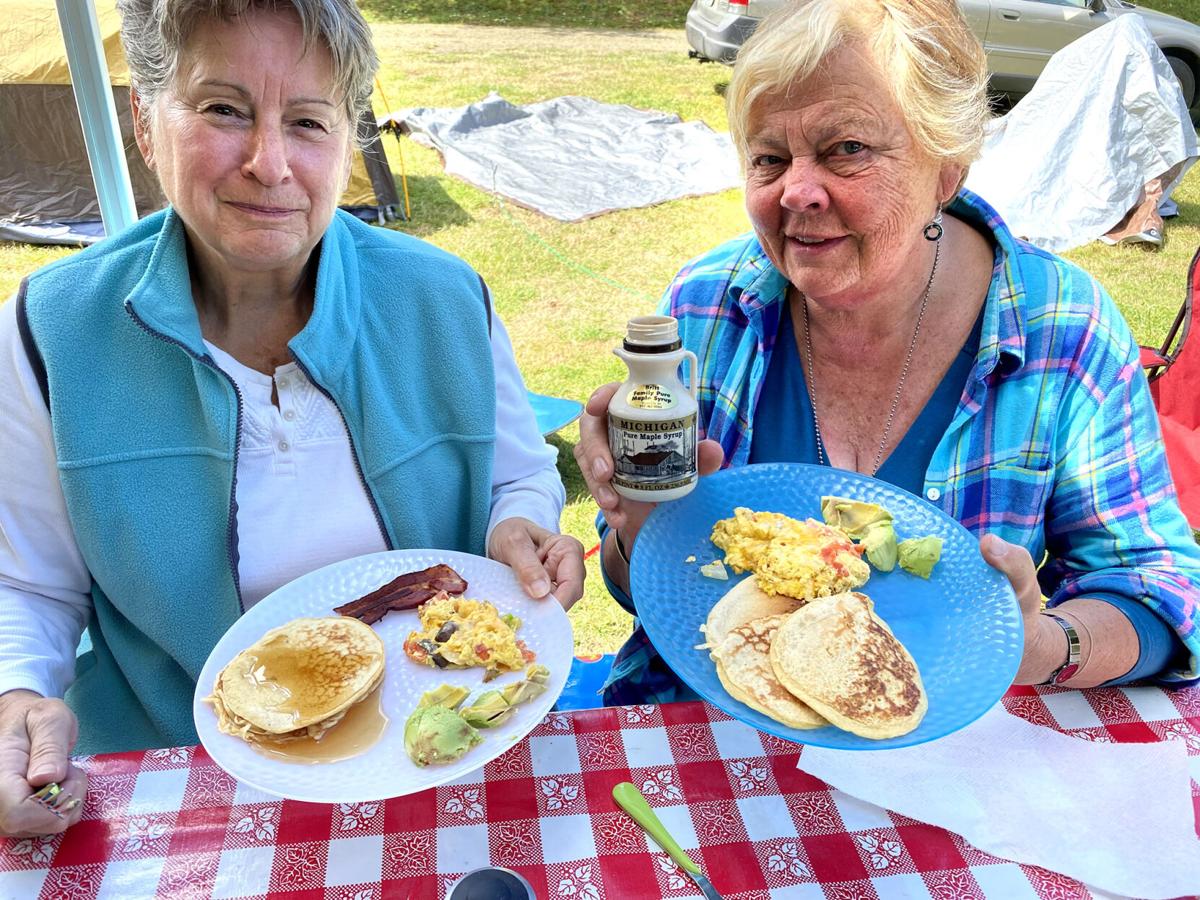 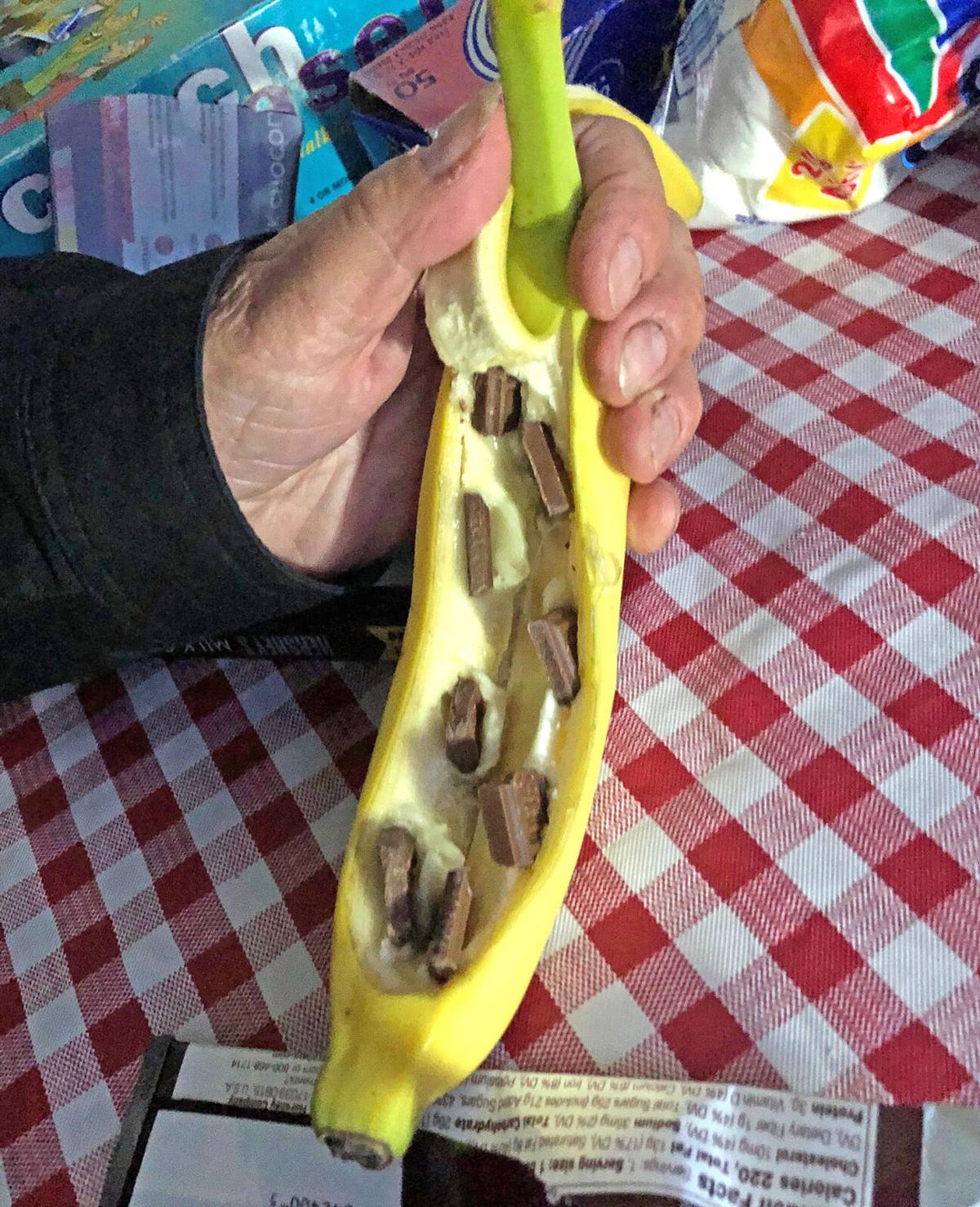 This is step one for making a “banana boat.” 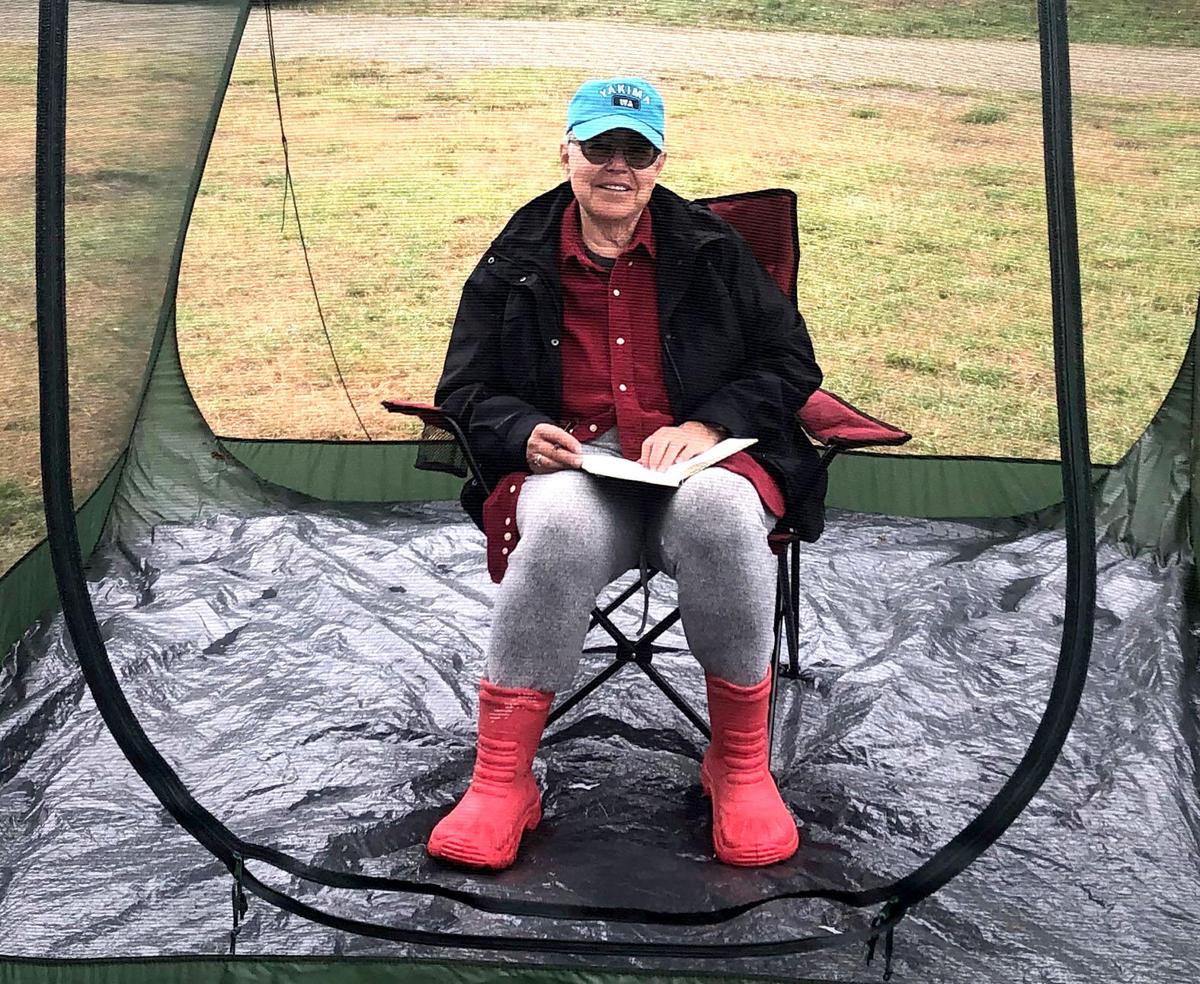 Columnist Cate Gable works on her personal journal in the insect-free space of an anti-mosquito cube.

This is step one for making a “banana boat.”

Columnist Cate Gable works on her personal journal in the insect-free space of an anti-mosquito cube.

Roll out those lazy, hazy, crazy days of summer

Those days of soda and pretzels and beer

Roll out those lazy, hazy, crazy days of summer

You’ll wish that summer could always be here

We’re so spoiled at the beach. Our mostly Mediterranean weather provides us with a narrow range of pleasant days — not too hot, not too cold. But — OK, I’m whining a little — a couple of these days lately have been almost too hot. I say this with apologies to sister Starla, suffering through 102 degrees in Yakima, and friends Susan and Paul at 110 degrees in Tucson (complete with an extra dose of uncontrolled virus and fires).

Heat at the beach means watering the tomatoes and roses every day and making sure the bird bath is full. Yes, I know I’m in the immensely privileged position of not having to worry about keeping the kids home, and teaching or feeding them; the prospect of getting grabbed by ICE; or the threat of being sent back to some country I’ve never lived in (like our Dreamers). As an elder American, I’m more worried about our endangered Democracy, what with Federal BORTAC (border patrol tactical units) teargasing protestors in Portland and Seattle; trampled voting rights; and no national strategy for covid-19.

So these do seem like the lazy (filling the birdbath), hazy (every summer beach morning), crazy (see above) days of summer. Not sure about the beer part — I’d much rather enjoy an occasional cold martini with my favorite mixologist, Phil Allen.

There’s something else I can highly recommend for these summer days. Do take advantage of the incredible resource we have in our own backyard — Cape Disappointment State Park. On a lark a couple of us (we’re pod-mates) sallied down to Cape D and — so lucky — managed to snag two adjacent dry (no hook-up) camping spots along the lake.

We saw every kind of camping set-up: from the minimalist guy with his hammock on a line tied from his car to a tree; to vehicles with I-can’t-even-count how many pull-outs. We saw truck-top campers, boats, tent pop-ups, tiny tents, sprawling tents, screen rooms, and car camping.

It was fun to walk the length of road to the restroom (one person at a time, masks de rigueur) and eye-ball all the campers — kids of all shapes, ages, and colors; elders; Gen-Xers; Millennials; singles, doubles, and family mobs.

The place was packed, but we had plenty of room to spread out and create a homey campsite for ourselves; though even I have to admit it was a tad bit over the top. We had Vicki Reece’s 20 foot Pleasure Way with awning out. Lulu, Nanci Main’s Volkswagen Westphalia; my Volvo wagon and exoskeleton tent; two picnic tables; two addition tables; a screen cube; an umbrella; camp chairs; camping dog bed; and scads of cooking equipment: grill, Coleman stove, electric skillet, two ice chests, and a couple of fire pits (provided). Looking back on our three days and two nights, I realize most of our time was spent cooking and cleaning up — essential activities.

The rest of our days were gloriously absent the Internet or much cell phone coverage. (No — news!) We were simply immersed in the beauty of the day, the shifting clouds, the changing light, the croaking of Jeremiah Bullfrog, Rocky Raccoon’s shenanigans, watching the fire, and — in the evening — playing games. Time slowed, there was an inordinate amount of uproarious laughter and even some guestimated gossip about our neighbors (who were of course strangers).

We decided that the one single guy who sat on his picnic table all alone all day staring at the fire was suffering from some hideous heartbreak. The old guy next to us who left at 4:30 a.m. every morning to salmon fish was a widower. Right next to us was a minimalist couple who smoked dope — the skunky smell wafted over to us — and kept such a low profile we never saw them even fixing food. One family-combo had so many kids they moved next to us at the dead end of our road because they had “disturbed” campers in their original spot. We liked them a lot and loved hearing the kids talking, yelling to each other, and bombing by on their bikes, one young fellow with a green brontosaurus bike helmet.

Campers are friendly folk. One fellow stopped to talk to Nanci about her Westphalia — “I can jump it for you if you need,” was the first thing out of his mouth. (Despite the Westphalia unreliability, [sorry Lulu] there is a fiercely loyal group of Westy-owners who help each other and pass on much-needed mechanic referral information.)

Some of our favorite times were in the evenings after dinner and clean-up. Our go-to games were Catch Phrase, a hysterical timed competition to get your partner to say a word only you can see; and RummiKub, a fast-moving board game that’s sort of a marriage between dominoes and gin rummy. We laughed so hard into the wee hours that we thought the camp police would take us away (as nearly happened last year when we had too many cars parked in one camping spot).

A couple of us hiked down to Beards Hollow through the luscious forest on what turned out to be a beautifully misty afternoon. The beach was sparsely populated with a couple perch fishermen in the surf and a car or two. Above us on the cliff an eagle perched on the tippy-top of a spruce surveying his/her domain. I remembered many family picnics just in this same spot in the ‘50s when us kids and moms would be dropped off while the dads fished the tide in on the jetty.

How lucky we are to have this dynamic wildness so close at hand!

On our last night we built a fire and waited for the coals to burn down so that we could make banana boats for desert. I’d nearly forgotten about this campfire girl treat from so many years ago; something we made on the last evenings at Camp Roganunda on the Chinook Pass Highway just past Whistlin’ Jacks.

Here’s the recipe. Get a banana — not too ripe. Surgically cut a flap in the top from the stem side down the upturned side and back. (Don’t cut it off because you need it later.) With a spoon, scoop out a portion of the banana and eat it. Then push into the banana flesh all up and down the opening little squares of Hershey’s chocolate — or chocolate chips if that’s what you have — and little pieces of marshmallow. Stuff it as tight as you can; then put the banana skin-flap back over and wrap it all securely in foil. Now move burning wood away and set your banana boat(s) in the coals and cover them for 10-15 minutes, depending how hot your fire is. When you take them out, the banana will have cooked down and the chocolate and marshmallow will be all melted into every yummy bite. The hardest part is waiting for your banana to cool enough to eat.

We had ice cream with ours from Serious Grocery, right across from the park. One “scoop” is an incredibly large volume and they have a luxurious range of flavors. (Tip: get firewood before you enter. They often sell out.)

We got wet, we were cold, we got mosquito bites and dirt under our fingernails, and we slept badly. (Jeremiah was very loud!) We had some of the best fun I’ve had in months. Try it.