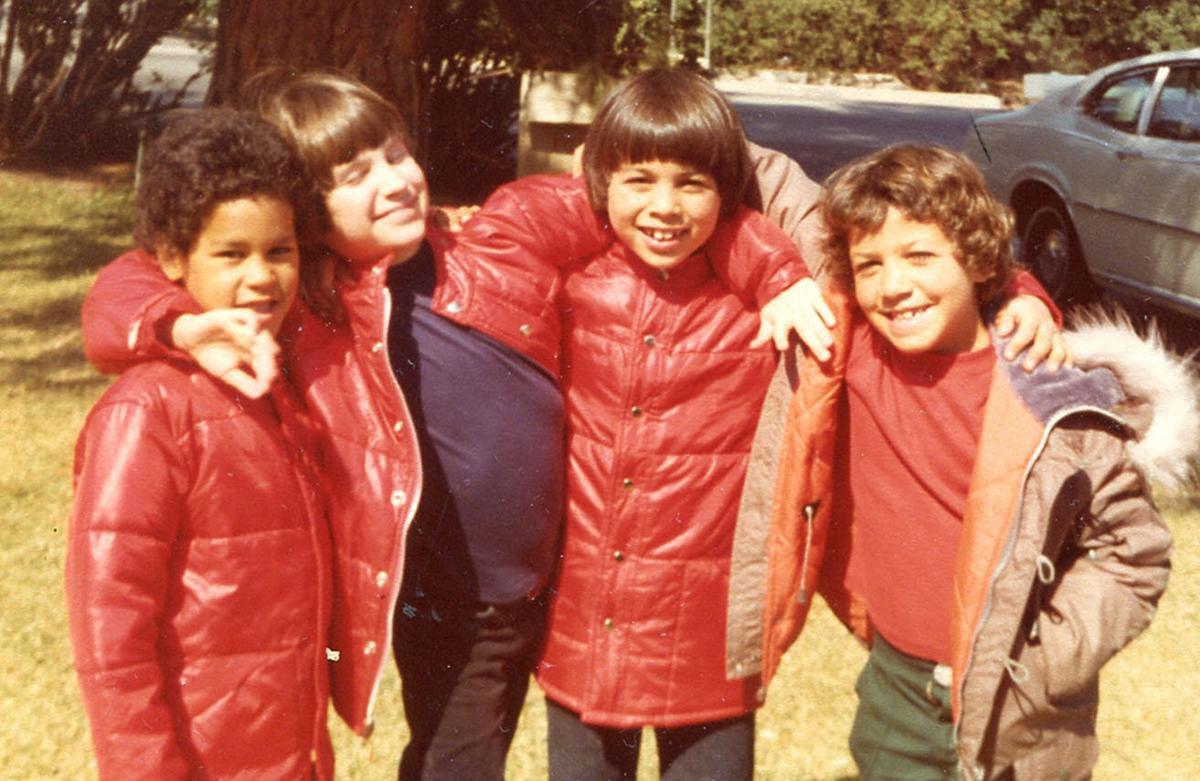 The “first four.” Tucker became the adored youngest member of the first foursome of kids. (There would be a span of 11 years before the next bunch of four.) From left, Tucker, Jordan, Jamie, Lindsey. Photo taken in 1977. 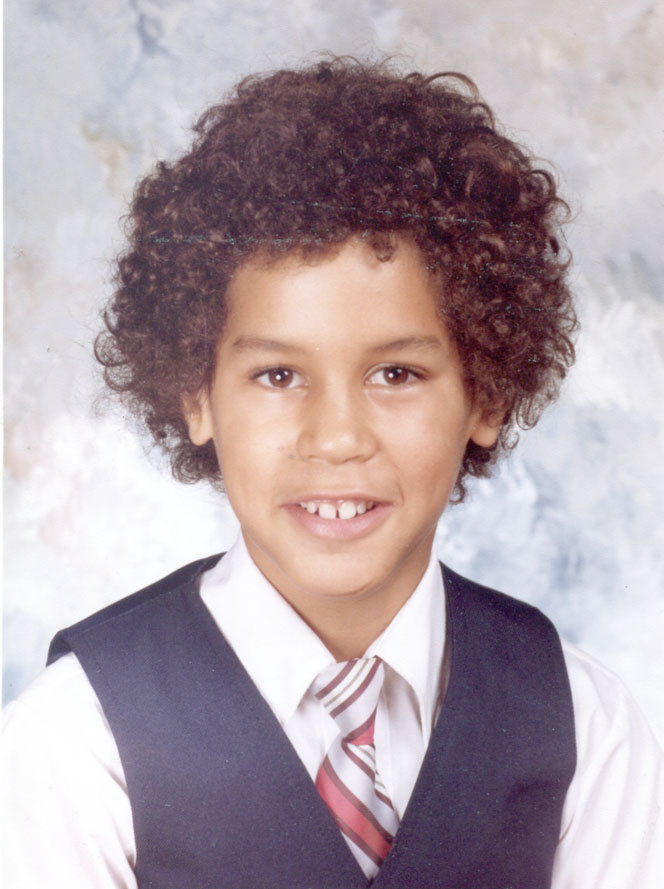 Tucker (school photo, face) at 9, the age he was during the 1980 trip and also during the Atlanta Missing Children Crisis — a polite, well-spoken young man. 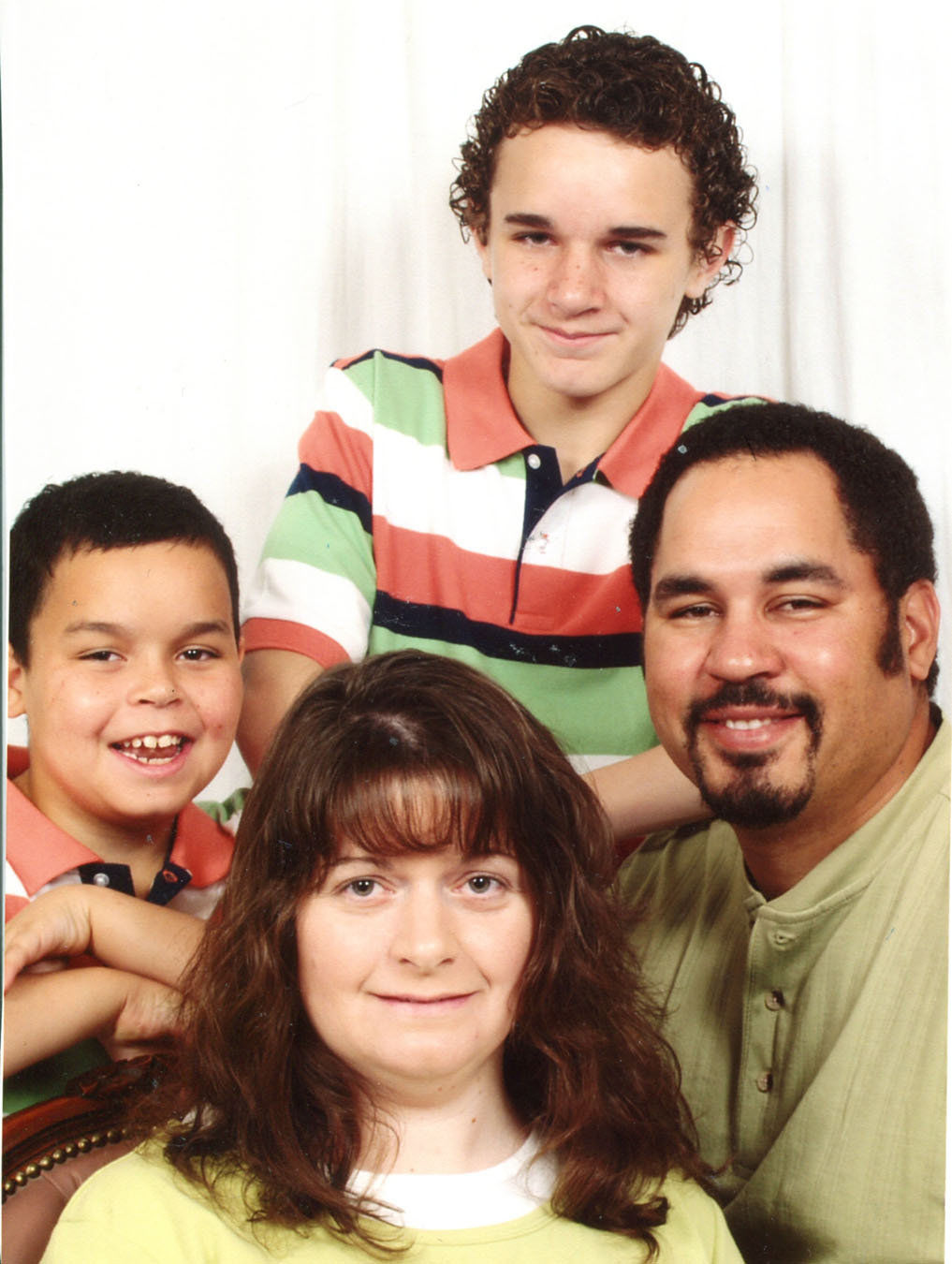 Tucker's foursome. From top, clockwise, Jacob, Tucker, Cela, Justin. Photo taken in 2007, 40 years after photo 1. Tucker is a devoted father and husband, and has held the same job for more than a decade, a family record.

The “first four.” Tucker became the adored youngest member of the first foursome of kids. (There would be a span of 11 years before the next bunch of four.) From left, Tucker, Jordan, Jamie, Lindsey. Photo taken in 1977.

Tucker (school photo, face) at 9, the age he was during the 1980 trip and also during the Atlanta Missing Children Crisis — a polite, well-spoken young man.

Tucker's foursome. From top, clockwise, Jacob, Tucker, Cela, Justin. Photo taken in 2007, 40 years after photo 1. Tucker is a devoted father and husband, and has held the same job for more than a decade, a family record.

His little body begged to be cuddled. He slept half-curled, half-kneeling, in yellow footed pajamas, cheek pressed to the mattress, eyelashes flicking. Precious boy! We knew he was five months old, African-American/Polish-American. We didn’t know he would scream at strangers, jump at noises, struggle with learning and judgment, well beyond his teens.

Tucker was a drug baby. That’s what we believe. His mother tested negative at his birth, but we think she used drugs earlier in pregnancy, causing what he would call “a problem with my brain.”

He was loved, by all of us! Jordan was 4 when we adopted Tucker, Jamie, 3, Lindsey, 19 months, and they swooped him into their “can do.” We would need every bit of togetherness. We were in for a shock.

Griggstown, New Jersey, near Princeton, was a friendly place, we thought, for our racially varied family. We picnicked with neighbors, had the best babysitter ever, Dale Langeland. Burt’s job required travel, and being alone never frightened me. Until lately.

On several occasions, the phone rang around 2:30 a.m. When I answered, I heard a man breathing heavily. The calls came only when Burt was away.

One night, Burt and I were enjoying a late dinner, drapes open to the stars. The house was dark except for candlelight.

A fire flashed in the yard. We stared in horror. It was in the shape of a cross.

Burt ran out the door. No one was there; a truck roared off. He doused the fire. We called the police, shivering. Hate had come that close!

Three huge policemen filled the kitchen with clanking. Jordan and Jamie watched, wide-eyed, from the hall. One policeman brought in a charred, hand-carved cross, 10 inches high — a baby cross. Our beautiful babies! How could anyone do this? The police had seen this craftsman’s work in other cross-burnings, in KKK activities in the Princeton area.

It didn’t take long to decide. We returned to California. In a way, the KKK won. But the move turned out well. We settled among mingled cultures, and the kids blended right in.

Tucker was a fun-loving boy who often had no “stop” gear. When he was five, we lived on a steep gravel road, above a canyon of live oaks. We had one rule: No bike-riding down the road! Burt knotted heavy rope into a ladder and swing, tied them to a towering eucalyptus, and happy kids flew over the trees, hollering like Tarzan (while I nearly fainted). Tucker also flew down the road on his bike, and split his chin open. He sobbed in Emergency, “Sorry! Sorry!” It makes me cry, even now.

Age nine for Tucker was a mellow stage. I felt comfortable taking him, Jordan, Jamie, and Lindsey around the globe to visit aid projects for six weeks. I wrote for World Vision Magazine, and the four kids were my adaptable sidekicks — polite, delightful ambassadors! We were privileged to visit Mother Teresa in Calcutta, India. After she and I talked on her stone bench, she took time with the children, asked if they’d like to work with her. To the boys, she said, “You could wear clothes like mine!” and held her skirts as if to curtsy. She noted Tucker’s sweet Africa-rich looks — his skin color near that of her beloved babies — and he caught extra sun-rays of her smile.

Tucker hung on for five weeks. He finally buckled in the Bombay Airport, crying loudly, “I can’t do this any more!” He was right. It was time to go home — to our new city, Atlanta, Georgia, where Burt waited.

But in March 1980 Atlanta was in crisis. Black children were being abducted from our neighborhood and murdered. (When Wayne Williams was arrested for the crimes in May 1981, 28 victims had been identified.) The Atlanta Constitution published photos of victims — children who looked like Tucker.

For safety, kids traveled in groups. One afternoon, Jordan, Jamie, Tucker, and their friends took a bus to a movie. Afterward, Tucker disappeared. The others looked everywhere, came home without him. Frantic, we called police. We searched for hours. Near dark, a police officer knocked. Tucker was with him! He had decided to go home alone, boarded the wrong bus, ended far away.

As Tucker grew up, he had more close calls. We, and he, worked hard at finding answers. Great news: He conquered his challenges!

Tucker has his own foursome with his wife, Cela, and sons Jacob and Justin, now strong young adults, and enjoys an extended in-law family, including Cela’s parents, Connie and Cecil Norman. He’s held one job, city landscaper in Wichita, Kansas, for a decade-plus, and he rides with a motorcycle club that benefits St. Jude’s Hospital.

When his first child was born, Tucker asked the doctor, “Is his brain OK?” It is; Jacob heads soon for a Ph.D. At our last reunion, Jacob was a baby. The family count was 14. Now it’s 32. Tucker pushes for another reunion, “ … you know, before it’s too late!” (We’re getting up in age.)

So we’ll have a jam-packed Christmas Eve, same as when the kids were small (except more packed!), candlelight, firelight, teeny skiers on the tree, Burt reading Luke’s account of Jesus’ birth, pocket puzzles, giggle gifts, hooting in huggy bunches, pumpkin pie and whipped cream, safe against the night.