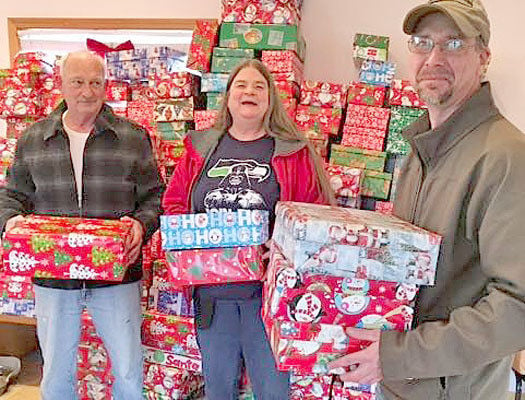 (From left) Scott Lough, Gail Ahrens and Robert Hauff were at work stuffing Shoeboxes in preparation for holiday deliveries. 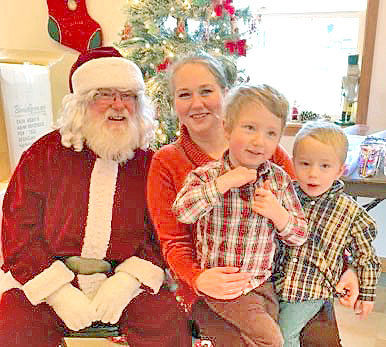 Santa stopped by Shoebox of Joy at the Old Long Beach Depot to deliver some joy to mom Jenae and her sons Josiah (left) and Adrian. (Papa Cameron was taking photos.)

(From left) Scott Lough, Gail Ahrens and Robert Hauff were at work stuffing Shoeboxes in preparation for holiday deliveries.

Santa stopped by Shoebox of Joy at the Old Long Beach Depot to deliver some joy to mom Jenae and her sons Josiah (left) and Adrian. (Papa Cameron was taking photos.)

He has all the wrong instincts. He has put forward a ghastly array of all the wrong cabinet picks. He continues to embarrass himself and all Americans with insipid and petty tweets. He may prove to be our most incompetent and dangerous president.

CIA intelligence shows Russia hacking teams “Cozy Bear” and “Fancy Bear” were able to get into both Republican and Democratic national committee emails, though they sent only D.N.C. information to Wikileaks (full story: tinyurl.com/NYT-on-Russian-Plot). Trump has refuted this. He says it doesn’t matter; drop the inquiry because “the November 8 election ended a long time ago in one of the biggest electoral victories in history.” (Note that eight of the 12 most recent elections have been decided with larger electoral winners.)

Pointing out the falsities perpetuated by this soon-to-be (but not my) president would take a fleet of full-time fact-checkers. I’m hoping there may still be a majority of Americans for whom “facts” and “the truth” might be meaningful. After all, Hillary has now won 2.7 million more popular votes than the Donald, so a majority of us were not fooled by his con job.

Most of my friends have simply gone to ground this past month, unable to watch the news, unwilling to witness the latest outrage in the flabbergasting (if it weren’t real) “reality show” our political scene has become. After Ivanka’s “60 Minutes” interview with her dad, she hawks the bracelet she wore for $10,000 in a “Style Alert” email which read, “Ivanka Trump wearing her favorite bangle from the Metropolis Collection on 60 Minutes.” Welcome to presidential capitalism Trump-style.

On the Twitter-front: Alec Baldwin’s satiric portrayal of the Drumpf is “unwatchable!” “not funny,” and “sad” (Dec. 4). Boeing’s 747 Air Force One jet “is ridiculous” with “costs out of control. Cancel order!” (Dec. 6). Just before the twitter tirade hit, Boeing gave one million dollars to Trump for his inauguration. Just after, their stock fell one percent.

“Nobody should be allowed to burn the American flag — if they do, there must be consequences — perhaps loss of citizenship or year in jail!” (Nov 30). Trump doesn’t seem to know that this offense is explicitly allowed under our free speech rights.

Chuck Jones, Indiana union leader, criticized Trump’s so-called job saving maneuvers at Carrier. Jones says that 550 of his union members are losing their Carrier jobs, yet the company is still getting paid $7 million dollars to keep 350 engineering jobs which weren’t moving to Mexico anyway. He was promptly blasted by Trump as a “terrible leader.” Jones, who only has a flip phone and doesn’t follow the Donald, didn’t understand why he was suddenly getting death threats until one of his buddy’s called to tell him he’d been trolled by Trump.

Trump can’t stand it when he’s a loser. “I won the popular vote if you deduct the millions of people who voted illegally” (Nov 27). There is no evidence of voter fraud. However, if there were such horrendous fraud, why would Trump be fighting the recounts in Michigan, Pennsylvania and Wisconsin? Oh well, who cares? — on to other “presidential” activities.

Trump said he’d “drain the swamp.” Instead he’s nominated multi-million-dollar power-brokers like professional wrestling mogul Linda McMahon to the Small Business Administration; she donated $7 million to his campaign. Secretary nominees for Labor, Treasury and Commerce were all six-figure donors.

Then there’s the simple question of suitability and qualifications for cabinet nominees. First we have past Alabama attorney general and senator Jeff Sessions, put forth for U.S. Attorney General. Sessions was nominated for a federal judgeship in 1986 but was denied confirmation when even his fellow Republicans called him too racist for the job.

Oklahoma state Attorney General Scott Pruitt has been nominated to head the Environmental Protection Agency. He’s the same fellow who has sued the EPA numerous times because he thinks clean water and air regulation should be up to the states. As Stephen Colbert said in a recent skit, “If Missouri dumps chemicals into the Mississippi River, they tell those chemicals, ‘Remember, you just stop at the Arkansas state line! You’re on your honor, OK? No further!’” (See his stand-up routine here: tinyurl.com/hfumr5j.)

Then there’s pediatric neurosurgeon Ben Carson who’s been nominated for the department of housing and urban development, which he knows nothing about. (Trump once said about Carson, he has a “pathological disease;” now, though, he’s evidently been absolved of past idiocies.) Or what about Amway Corporation heiress Betsy DeVos as Secretary of Education? DeVos has made it her life’s mission to dismantle the public school system by promoting voucher programs for private schools that cherry pick students, leaving the poorest, least equipped to learn in public schools.

These are just the facts, ma’am. And, no doubt, there’s more fun in store.

But, thank goodness, back on the home front, cozy fires are burning. Friends and I enjoyed a lovingly prepared pancake breakfast at the Senior Center in Klipsan. Beside the Christmas tree and dressed in elf hats, Janet, Bill and Chuck provided festive music while we chatted with neighbors.

And don’t forget you have until Wednesday to become a Christmas Angel and help out a local child. Pick up an “Angel Card” at one of our local banks or credit unions; purchase the items suggested: socks, a special toy, or a new winter coat. Then wrap your present and drop it back where you picked up the card. Our local Rotary Club, sponsoring this great idea, will take it from there.

Or consider “Shoeboxes of Joy” for the elderly, low-income or otherly-abled folks who may not have family close. DeAnn Kettewig and Scott Lough began this program nine years ago and it’s grown every year. Now 660 shoeboxes are given out during the holidays. Come by the old Train Depot in Long Beach — 102 3rd Street NW — from 11 a.m. to 1 p.m. or 4 p.m. to 7 p.m. Monday through Friday, or 1 p.m. to 4 p.m. Saturday or Sunday, and fill a shoebox with personal items: soap, razor, hand lotion, a can of soup, cookies, a book, a pet toy, even BlankieGrams (boxes, wrapping, everything donated by local businesses).

Santa’s elves have been busy wrapping and stuffing boxes, but they could use your help or donations. On Dec. 23 and 24 volunteers will also be needed for Shoebox deliveries. Call DeAnn, 642-1105, for more information.

So despite chilling news on the national front and our 15 minutes of snow last week, our community continues with warm-hearted holiday traditions. Keep the faith.