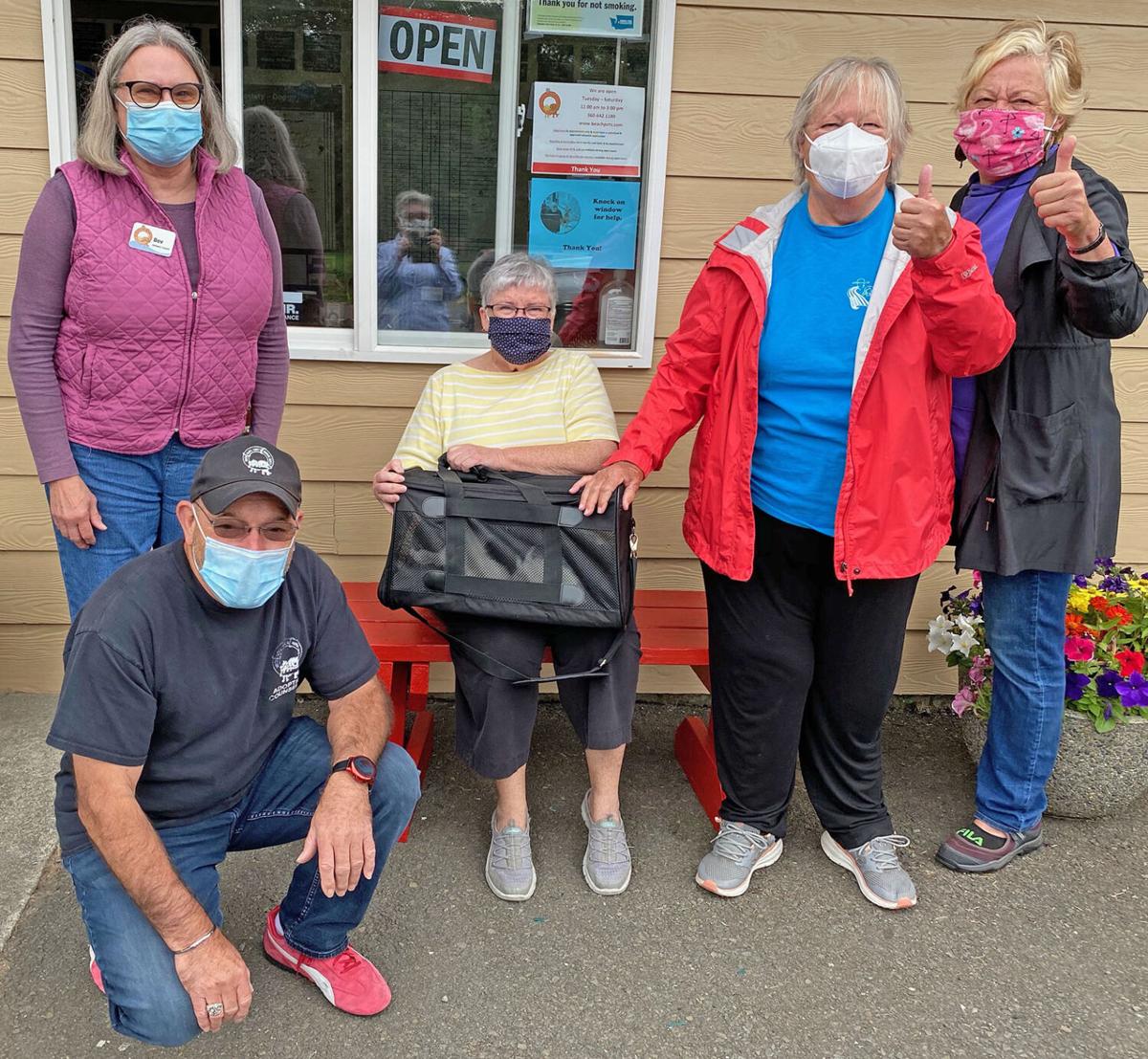 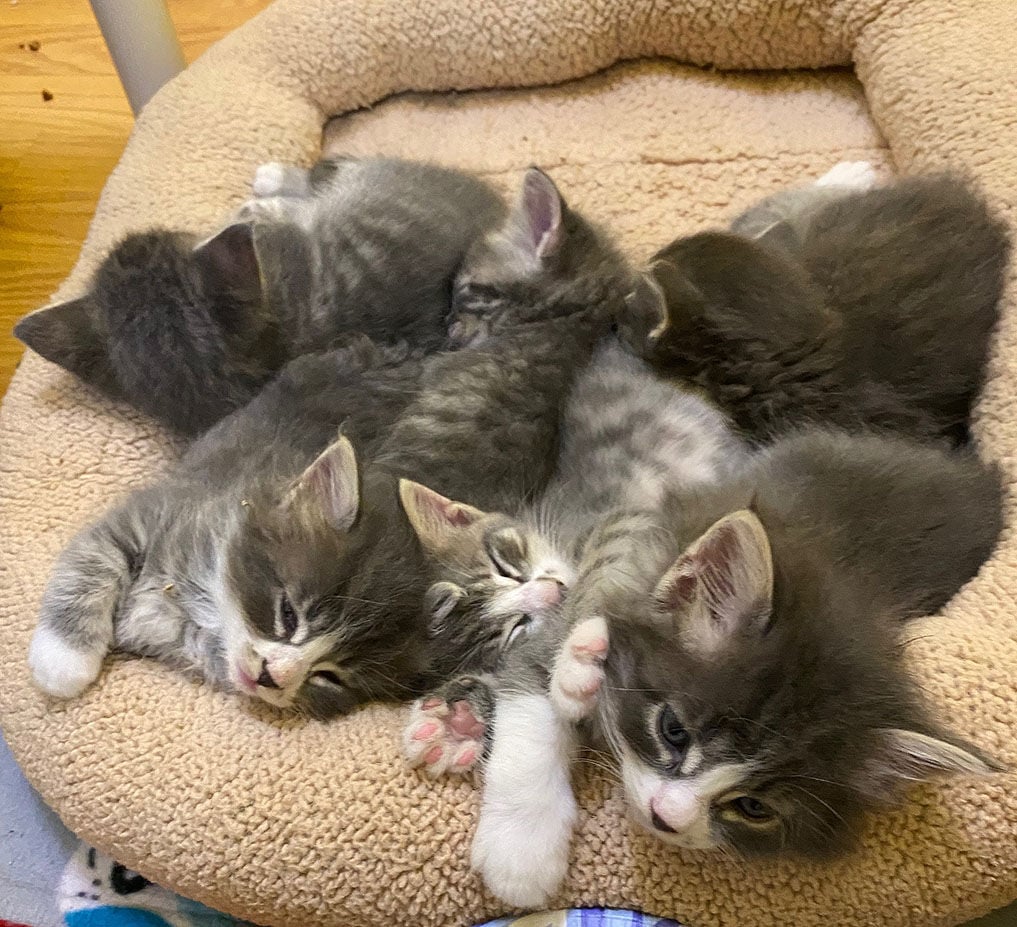 Pile o’ kittens — this year there’s been a kitten explosion at the shelter.

Pile o’ kittens — this year there’s been a kitten explosion at the shelter.

I’ve always had fond feelings for our local South Pacific County Humane Shelter for a number of reasons. First, we’ve shared this page over the years, so I think of us as journalistic partners waltzing through time hand-in-hand, week-by-week. I can’t help but look at the photos of the lovely furries and hope they find their fur-ever homes as soon as possible.

Secondly, I’m by nature an animal lover. In fact, I love all of earth’s creatures — except perhaps mosquitoes. I gently rescue spiders from the bathtub and flies from the windows. I’m struck to my heart when I see all the cormorants and gulls dead on the Megler Bridge; or any animal by the side of the road. If I can, I stop and move the small body into the bushes — a tiny act of respect.

So, I loved hearing from good friend, Rosemary Hallin, a couple weeks ago that she was going to take home a beautiful tabby named Lux (Rosemary calls her Dee Lux), a featured pet on the shelter page. Lux ended up at the shelter pregnant, had her kittens, was spayed and — though she didn’t know it yet — was heading for her own purr-manent home. When her picture appeared two weeks in a row, Rosemary thought, “She’s waiting for me. That’s my cat.”

Last week when Rosemary stopped in on Dee-Day and entered the adult cat room, both Lux and her “boyfriend” Mustang came right to her. Well, actually Mustang approached Rosemary first and curled around her feet. “Mustang really caught my eye, but I came to take Lux so I didn’t want to go back on my word,” Rosemary said.

Sure enough, Dee Lux went home with Rosemary and, in true cat fashion, immediately hid under a bathroom dresser for the remainder of the next couple days; while Rosemary found herself still thinking about Mustang. Was he lonesome without his girlfriend? Was Dee Lux missing him? Could she have a two-cat household without becoming a certifiable “cat lady”?

The next morning Rosemary returned to the shelter for Mustang — we all figured it would be a feline Romeo and Juliette story (without the suicides). I checked with her the morning after Mustang arrived and received this text message. “Get a cat, they said. OK. I got a cat. You can’t leave her boyfriend behind, they said. OK. I got the boyfriend. He remains ensconced under my dresser. Except for the middle of the night, when he came out for a roiling two hours of cat madness — making noises more like growling words, creating visions of the devil incarnate…in MY bedroom. He is under the dresser now, resting for tonight’s purr-formance.” My LOL was a barely sufficient response.

All of us in Rosemary’s pod have encouraged her. “He’ll settle down.” “This is only his first day.” “He was in the cat room for four months — he just needs more time to adjust.” We’re cheering her on because, truth be told, we’d all like a cat but… well... cats. We’ve even organized a kitty shower so we can help her with cat-merch: beds, food, cat tree, treats, toys.

A couple of us had morning coffee with Rosemary the night after Mustang made his feelings clear — we’re carefully watching this story unfold. (Meanwhile, Rosemary has gone back home for a nap.)

Back at our no-kill shelter

I’m sure this romance will have a happy ending. And while we’re waiting for that, I decided to go back to the shelter to speak to board member Patti Lee about all things rescue-related. I’ve followed our no-kill shelter for years — the work they do is phenomenal. They even accept animals from other states’ shelters, poor cats and dogs that are about to be killed. I locked eyes with one of these from California, an adorable three-year-old full-blooded Shih Tzu named Quasar. Fortunately he had a family coming for him. I could think of no good reason any time anywhere for a dog like that to be killed.

They even accept animals from other states’ shelters, poor cats and dogs that are about to be killed. I locked eyes with one of these from California, an adorable three-year-old full-blooded Shih Tzu named Quasar. Fortunately he had a family coming for him

Patti mentioned that some folks think both the adoption cost and the process for matching an animal to a family or an individual is out of line. But the shelter staff have crafted policies that ensure their return rate for a pet is very low — which is better for everyone; they’re committed to finding the best match for pet and guardian. Once you apply for a pet, you may need a vet reference (to show you’ve properly taken care of an animal in the past), though if you’ve never had a pet to care for this can be waived. You need a fenced yard for the safety of the dog; and the whole family needs to do a “meet and greet” with the animal. If you already have a dog and you’re introducing a rescue dog into the mix, you must bring your original dog to see if both dogs get along. (No need if you’re adding a cat to a dog-household, says Patti. “Cats are always in charge no matter what!”) The price of adoption depends on the age and breed of the animal or whether it has special needs but can range from $50 to several hundred.

Something else I learned from Patti is that the designation for “feral cats” has changed to “community cats.” Often a cat belongs to a whole neighborhood; and a “managed community” means that the shelter staff feeds and traps cats for spaying or neutering in order to keep a neighborhood feline population healthy. There are two areas of community cat populations on the Peninsula: Ilwaco harbor and Port of Peninsula, at the Ark. People who feed these cats, thinking they are doing good, actually disrupt the shelter’s ability to trap cats for spaying. Patti told me about one woman who was cooking chicken to feed the Ark cats — which attracted coyotes and raccoons and, thus, endangered the cats she was trying to help.

This year the shelter has had 80 plus cats or kittens instead of the usual 40 or so. And because covid also meant that the usual fund raisers had to be cancelled, the shelter has been running a deficit for several months. (Their annual budget is $250,000.) They’re about to start a new virtual fund raising effort — so please help support the incredible work this team provides by sending a check or clicking on the donate button of their website at beachpets.com. And, of course, volunteers are always needed to clean cages, do laundry, cuddle cats, and walk the dogs. The shelter is also looking for some younger generation board members to help carry the mission forward.

When Nanci Main and I walked into the shelter last week to provide moral support for Rosemary, it was difficult not to walk out with Thomas (a little black and white tuxedo) or Argo (a tiny tabby just back from his neutering) or one of the teeny weeny grey striped kittens all in a pile (they won’t be ready for several weeks). Second best to bringing home a cuddly furry is watching a friend revel in catness; and/or sending funds to make sure our dedicated animal saviors can continue to do the good work they do.

I’m going to check with Rosemary later today to see if Mustang and Dee Lux have renewed their romance and have settled into their purr-fect new home. And I’m hoping Rosemary gets a good night’s sleep sometime soon.