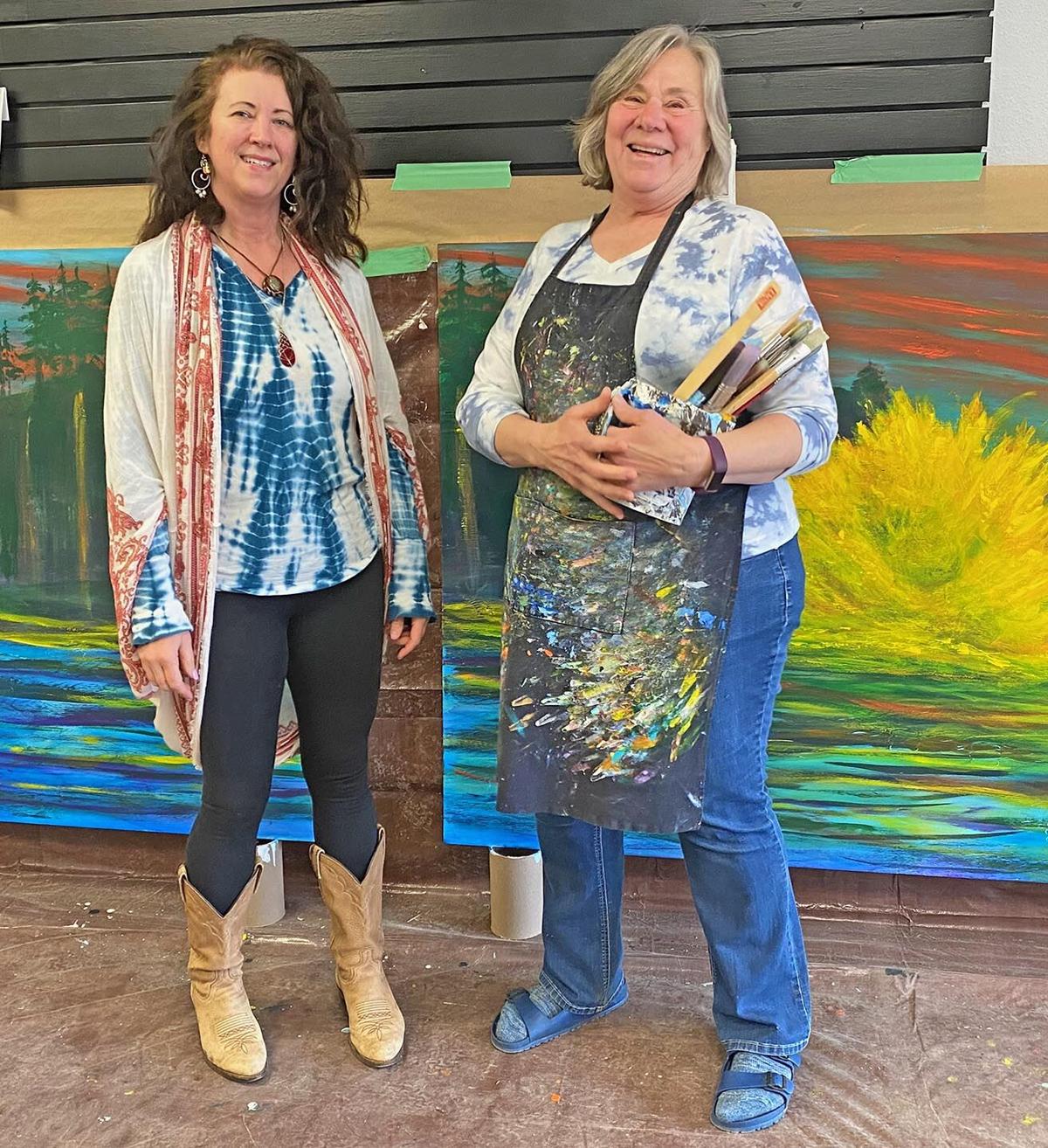 Building owner of 304 Pacific Avenue South, Shelley Ausmus, stands with artist, Bette Lu Krause, in front of mural panels which will eventually be mounted outside at the Lewis and Clark Plaza. 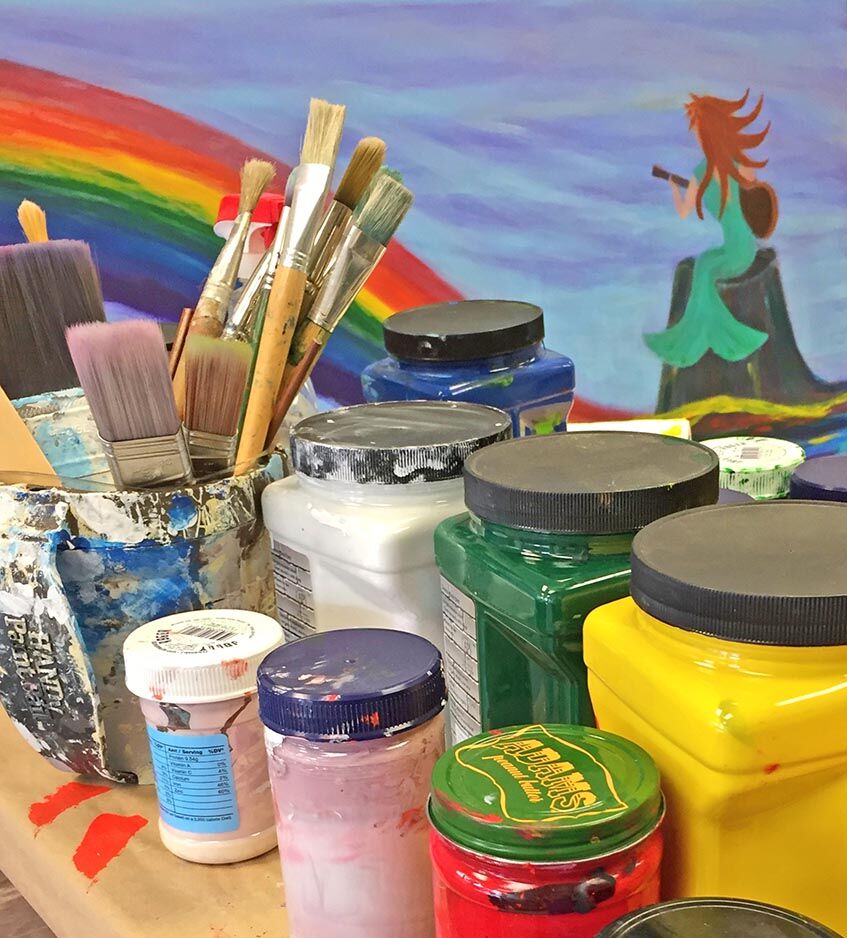 Bette Lu’s paints sit ready for application while the mermaid sings in the background.

Building owner of 304 Pacific Avenue South, Shelley Ausmus, stands with artist, Bette Lu Krause, in front of mural panels which will eventually be mounted outside at the Lewis and Clark Plaza.

Bette Lu’s paints sit ready for application while the mermaid sings in the background.

First we had the pink full moon — one of only two supermoons this year — and now the Kwanzan cherry petal-fall that has pink polka-dotted the driveways, pathways, grasses, and cars. Although the “pink supermoon” wasn’t really pink, it was super — about 7% closer and 15% brighter, so they say. (It’s pretty hard to see the difference unless the regular and the supermoon appear side by side — an occurrence you probably don’t want to admit to, ever.) Pink-tinged apple blooms are popping, a bit earlier than usual (another sign of climate change). And, as I said last week, we’re going to need more water this season to keep the garden happy.

Although, finally, in the midst of our sunny spring days we had rain — just enough to remind us why we live here: everything is beautiful, green and lush.

House prices are off the charts and there are scant rentals to be found. The other day I spoke to Robbie Wright, photographer and owner of Bloomer Estates. He says he’s always looking for spots for mid-term rentals (30 days or longer) as it seems our commissioners have shut down any new short-term vacation rentals in residential areas.

I hardly know where to start on this policy, let alone others that one way or another affect all of us. My career took place in the business world, and I’m an adamant proponent of entrepreneurship, as long as it’s balanced, fair and sustainable. So I can recognize a dysfunctional system when I see one. Our county is stumbling along with a governance structure that was created in the middle of the last century and IMHO it’s inadequate for 2021. But, as I found out when I began talking about this 15 years ago, no one wants to change anything.

The Peninsula, especially the north end, is the biggest revenue provider for the county, yet we have only one commissioner representing us. And there are only two legal municipalities in south county — Ilwaco and Long Beach — which means that our three county commissioners bear the weight of all the governance, policy, and decision making. Try getting help removing an abandoned motorhome or junker. There is no local jurisdiction; you have to go to the county. Try to find out how to enforce the community right-of-way on the verges beside the roadways, many of which are being taken over by homeowners for purposes other than what they were intended for (i.e. walking, parking, utility access, etc.). All these issues must go to the county, and our overburdened county staff and commissioners feel they have “more pressing issues.” It took three months (!) for me to get approval for a simple drain field repair (the engineered plans were exactly the same as the original ones already on file).

Yes, we’re rural. Yes, we’re country. Yes, we like all that. But can’t we still be effective and efficient solving our country problems, please? Our issues — and my whining — will likely continue to grow as we add more new homeowners to our little piece of paradise. Eventually, little by little, something will need to change.

I’d like to introduce you to a new businessperson with plenty of duende — Shelley Ausmus. Shelley purchased the building at 304 Pacific Avenue South, right downtown next to the Lewis and Clark Plaza at the corner of the main drag and Third Street. This building has three storefronts and will have three apartments upstairs. As usual for newcomers, Shelley has family here — an aunt and a dad — who had already discovered the Peninsula. So when a change in her lifestyle prompted her to look for a new challenge, she looked no further than Long Beach.

Shelley is still finalizing leasees for the storefronts but one will include clothing and interior design/home goods. In addition to renovating the entire building, upstairs and down, she is a musician and made early contact with other musicians and music lovers at the Pacific Performing Arts Center open mic nights. There she met Bette Lu Krause and, to make a longer story shorter, they have teamed up to create a quadriptych (or tetraptych: four panels) that will eventually be mounted on the plaza side of the building.

Bette Lu, one of the Oyster Crackers trio and a well-known visual artist, has been working on the four panels, each four by eight feet. When I met her last week she said, “Shelley wanted a mermaid playing the guitar — it’s really her — and once we decided on that, I thought, ‘Well then, I can paint a fantasy world!’”

There is an enormous rainbow spread across two panels that ends on a tree stump where the mermaid strums her guitar and sings. As Bette Lu says, “She may be creating that rainbow with her siren song and singing the salmon up the river.” The other two panels depict the Cape D lighthouse and headlands, nearly inundated by a huge breaker the color of the sun. The ocean fades into a Columbia-style river rushing past big trees. The colors throughout are vibrant and eye-catching, a signature Krause style. As Lu says, “We want these to appeal to everyone. We want kids walking by to point and say, ‘Hey, dad, look — there’s a mermaid!’”

These are the first big murals that Bette Lu has painted, though she was the co-founder of the Bay Avenue Gallery in Ocean Park (now owned by Sue Raymond) and painted a large outdoor scene for that business. These are a little more challenging. When she finishes the panels (she’s been working part-time for six weeks in one of Shelley’s storefronts), she’ll put a seal down (she wants to thank Lonnie at Jack’s for material suggestions) and then, “We’ll need to find someone with a lift to put these up on the building — they’re heavy!”

Shelley has a refreshing take on life and on Long Beach. She jumped full-speed-ahead into this project with confidence and faith that she both needed a change and could make change happen. She was part-owner in a construction company before coming to the Peninsula, and she’s been her own contractor for the building renovation. I have no doubt that she’ll be a great addition to our Peninsula, and that is obvious by the dedication she’s shown in her rehab of this classic downtown structure. She’s also on the lookout for other businesses that can augment what Long Beach already has to offer. “I’m not sure we need another T-shirt shop,” she says laughing.

Her building, which she calls “The Beach Place,” will have a grand opening around the first of June. So keep your eyes peeled and ears open for that. Welcome, Shelley, and thanks for being one of our new community members and an entrepreneur with a vision for how to add to what we love about where we live.