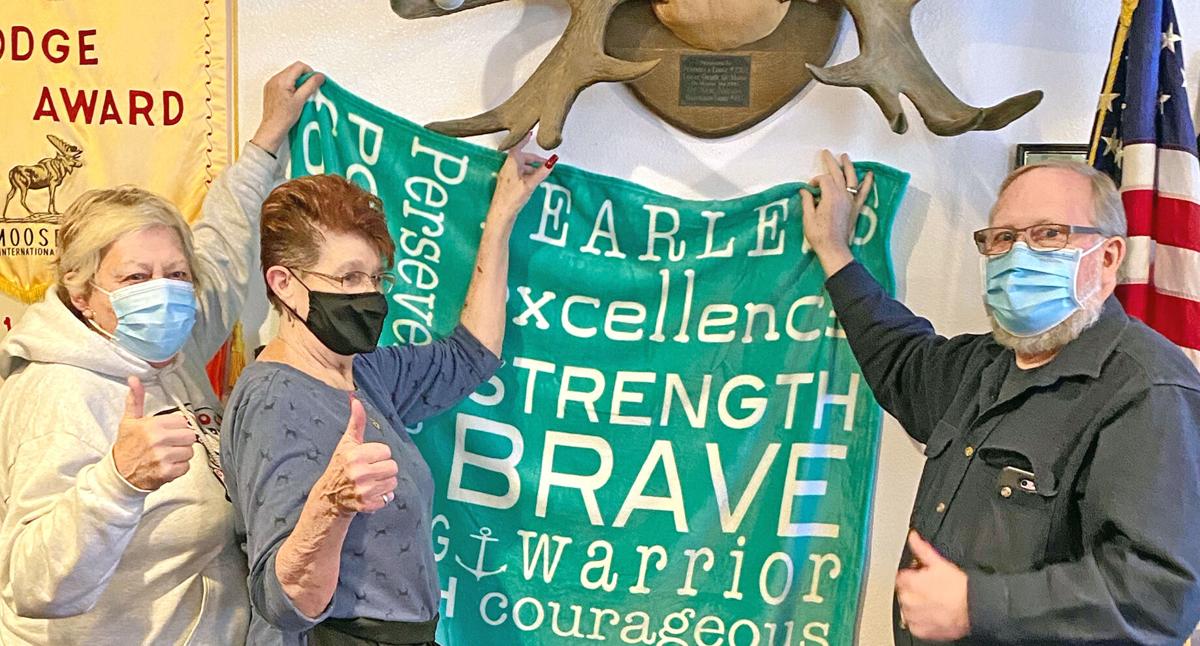 Nanci Main, Kathy Haney and Cliff Pederson, the organizers for the Vet Lunch Nov. 23, 11 a.m. to 1 p.m. at the Moose Lodge in Ocean Park, take a break from their planning meeting. 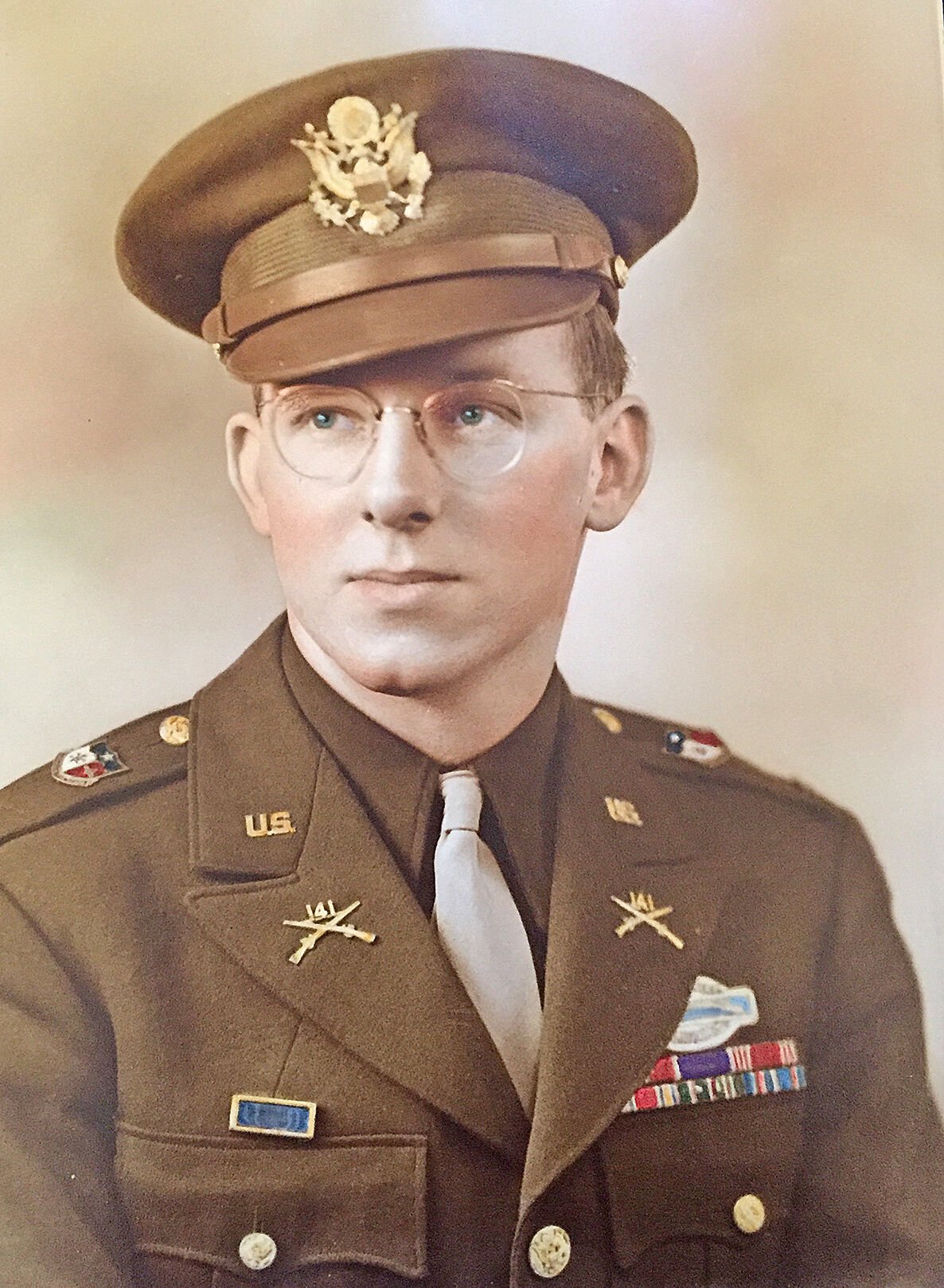 John Daniel “Jack” Krause, father of local artist and musician Bette Lu Krause, entered the infantry at 19. He earned a Purple Heart, both a Bronze and Silver Star, Presidential Unit Citation, and Marksman Badge among many other military honors.

I don’t too often think about what it means to be a Boomer — someone born after the end of the war — but every so often it comes home to me: we’re the generation that was raised by veteran moms and dads. Our parents had their young lives interrupted by two catastrophic events: first the Depression and then World War II. And it’s also a known fact that these parents were notoriously tight-lipped about the struggles and heartbreaks they lived through.

I heard no stories whatsoever about my dad’s wartime experiences as an Army commissary officer in the Pacific theatre on ships out of Seattle. All we knew was that he’d left a couple weeks before his graduation from West Chester State Teachers’ College in Pennsylvania (all senior students who registered to serve our country were granted honorary degrees) and that the University of Washington, in an extremely uncharitable move, would not honor that. He’d just married and needed a job; so, instead of being a junior high school history teacher, he became a salesman for the multinational packaging company Bemis, Inc. — his dream not just postponed but discarded.

And what about mom? Only when she was in her 80s did we discover that she’d lost her first fiancée, a pilot who was part of the elite team designated to drop the bomb on Hiroshima. He went missing in action on a training run and was never found. Mom was a gorgeous, grieving young woman and her story was wartime fodder for the Seattle newspapers for weeks after. Finally she met dad at an officers’ club, and together they picked up the pieces of their lives.

For the “Greatest Generation,” post-war times were prosperous. The GI bill meant returning heroes could purchase their own homes and earn a college degree if they wanted; the country was booming with the values of hard work, motherhood, and apple pie. Our parents’ traumas during the war were put into a box, shut tight, and locked. (A similar lock-down happened when our generation’s Vietnam vets returned, with the addition that this war was divisively controversial. No one wanted to talk about it; these men and women were shut down too.) Now, decades later, sometimes stories slip out of that lockbox.

A friend’s father on his deathbed revealed a few wartime tales to his family; they also knew that on his way home there was a horrific accident. The bus he was in rolled off the road and caught fire. Because he was so skinny, he was able to squirm out a window only to hear the screams and terror of others dying inside. Somehow, he landed on his feet.

In our last weeks, at the conjunction of Dia de Los Muertos and Veteran’s Day, a few of us met (masked and distanced) to talk about loved ones we are missing. The experiences of our veteran parents rose to the surface.

Bette Lu Krause’s dad, John Daniel “Jack” Krause, was a fresh-faced graduate of Escanaba High School in Michigan’s Upper Peninsula, when he entered the military at 19. He was a replacement assigned to the 36th Division, Company E. 141st Infantry on Dec. 6, 1943 in Italy. As he writes in a speech he gave to the American Legion (found by Bette Lu after his death), “I was introduced to screaming meemies while watching the U.S. shelling of the Million Dollar Mountain.”

“As green recruits most of our first jobs were to carry water rations and ammo to the platoons on top of the mountain overlooking the Rapido River and the Liri Valley. It was tough because of the mud, snow, and rain which caused us to spend nearly a full night going up and then carrying dead and wounded down to the aid station or graves registration.”

“My squad leader was Sergeant Perez. He didn’t much like the new replacements. The men in our squad barely knew each other. We didn’t know anything about the Rapido River Attack except that it was to begin on the 19th of January, 1944. That night we went down to the river bottom area. I was a 16mm mortar ammo bearer so had six rounds in my ammo pack, an M1 rifle and extra ammo. We were assigned to a barge-type boat with high sides. We were not instructed on how to carry it so while sliding it along the ground we hit a mine and blew a hole in the bottom. When we returned to pick up another one, an engineer told us to turn it upside down so that it didn’t drag on the ground. So our squad arrived at the river and launched the barge. We climbed in and started across but about halfway over, the swift current shoved us into a stump or something in the river and we overturned. Our platoon leader and most of our squad drowned. I managed to get loose from my gear and swam ashore. In addition to all my gear, I lost my glasses so I wasn’t even sure which side I was on. Fortunately, it was the American side. Company E. 141st was nearly wiped out that night. Without my glasses I couldn’t be an effective soldier so I was given duty in the company kitchen until I got a new pair.”

“The night of the 21st of January didn’t go any better. So the end result was that the attack failed miserably with many casualties and U.S. POWs. The German defenses were just too well set up and controlled all the high ground.”

“After consolidating our defenses we sat on top Mt. Castellone and watched the Mount Cassino Abbey being bombed in mid February. The division was relieved at the end of February and rested, trained and refitted until in May when we went to Anzio.”

Jack Krause earned a Purple Heart, both a Bronze and Silver Star, and too many other medals and honors to list here. In addition to Italy, he fought in Africa, Rhineland, France and Germany. He was discharged in 1945 and started his civilian life by marrying Elaine Dahl in Bark River, May 14, 1947.

Honor our vets, support our democracy

This is just a peek into the wartime experiences of a young man barely out of his teenage years, as were so many of the soldiers who became the parents of us Boomers. We had no idea what they’d been through. I can only imagine now how our free love, hippie gatherings, and revolutionary political agitation must have seemed to them — though, in fact, they fought for our freedom of speech and gave us a foundation from which to demand social reform and a deepening understanding of how to ripen and mature our democratic republic.

Our elections are central to our democracy, to our style of governance. Nothing about what the White House is doing now will help us toward that “more perfect union” our founders envisioned and our veterans fought for.

Reminder: The free Vet Lunch (pick-up style) is happening Nov. 23 at the Moose Lodge from 11 a.m. to 1 p.m. Call Cliff Pederson at 360-244-0086 to help the kitchen get a head count. Donations, especially during this increased shutdown time, are so needed now. And special thanks to Rita Nicely, who personally called 70 vets to invite them. “They were all so kind!” she says.

Let’s be kind, let’s care for each other, wear our masks, wash our hands, and keep the faith.