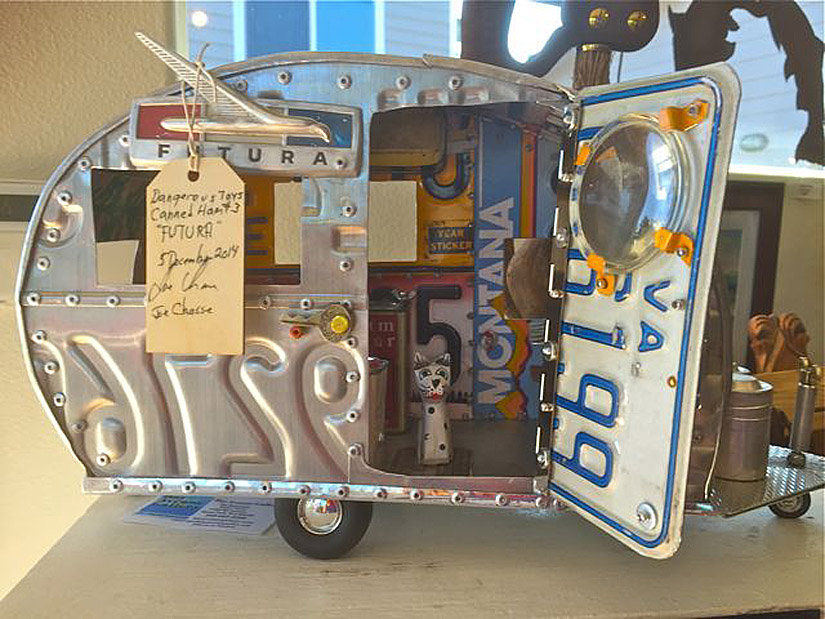 CATE GABLE PHOTOSJoe's Canned Ham Trailer, one of his signature sculptures, at the Bay Avenue Gallery. 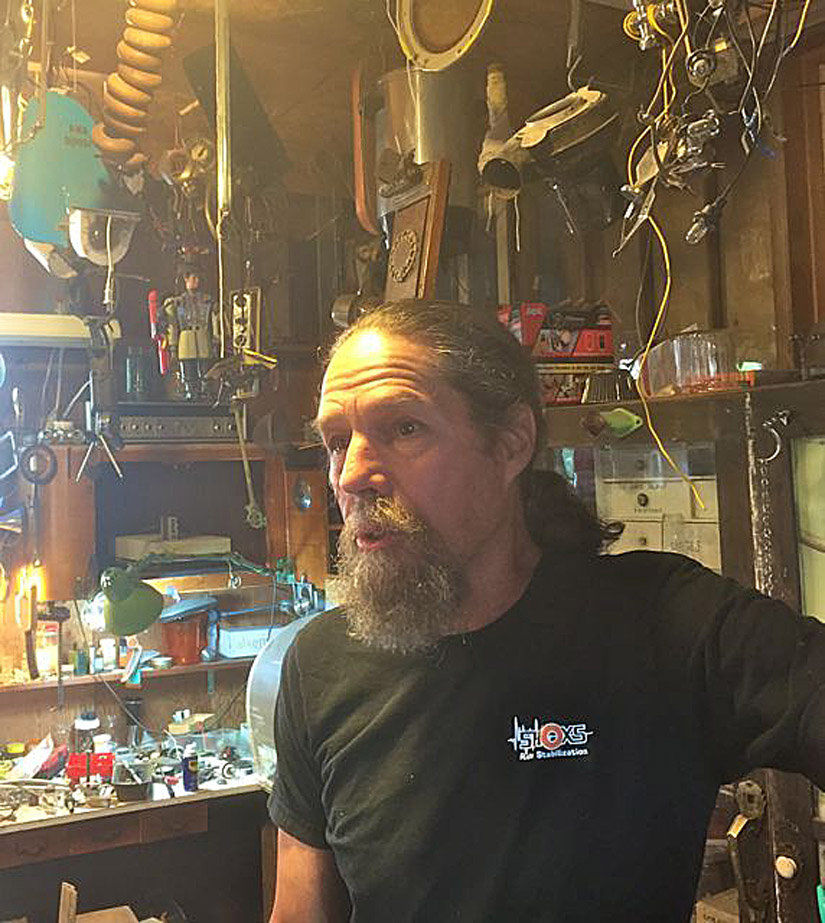 CATE GABLE PHOTOSJoe Chasse, sculptor extraordinaire, in one of the studios on his Klipsan Beach property just south of Ocean Park.

CATE GABLE PHOTOSJoe's Canned Ham Trailer, one of his signature sculptures, at the Bay Avenue Gallery.

CATE GABLE PHOTOSJoe Chasse, sculptor extraordinaire, in one of the studios on his Klipsan Beach property just south of Ocean Park.

Some artists create with paint — oil, watercolors, or aqua. Some use clay, bronze, brass, glass or even marble. Joe Chasse uses the stuff of life. And I do mean stuff, in the best possible sense.

I visited him a couple weeks ago and, as he says, “My whole home is my studio.” He is so right. You can’t miss his place. On nearly every square foot of his rambling property he has accumulated the raw material for his next project: hubcaps, clock parts, bicycle chains, odd pieces of wood and metal, license plates, springs, wires, cans, box tops, jars, rotary phone dials, light bulbs, tools, and innumerable other unidentifiable bits and pieces and gadgets large and small.

His whimsical sculptural pieces hang on his front porch, his back porch, his gate, and lead the way up his driveway. Folks have even started to drop things off at Joe’s place, things they think he might be able to use someday.

“I come by my art honestly,” Joe said, “My parents never threw anything away. They were master crap-stackers. I grew up in Camas, WA and my father had a wood shop in the basement. He made our bedroom furniture for me and my brother and he kept every bit of wood he cut off and didn’t use. He managed to keep boxes and boxes of little tiny bits of wood. You never know what you might need.”

Joe’s property is a veritable rabbit warren of small rooms and studios, each with their own flavor and variety of objects. After a tour of the grounds, we make our way into Joe’s living room where — no surprise — there are more art projects in various stages of completion.

It seems that Joe’s mother was a bit of an artist too. “I think I was my mother’s favorite. She dabbled in ceramics and had two kilns in the basement. At home, we had this giant kidney shaped table of faux marble — it sat in the dining room and it became the place for art projects. We’d scoot them out of the way to play cards.”

Joe has a life that seems sort of like his art — a little bit of this and a little bit of that came together to make something magic. When Joe and I start talking about what constitutes good Art with a capital “A” he demurs. IN many ways, his life has been his art. “I dabbled with painting out of high school, but then came the Viet Nam War. I got a little note from Uncle Sam but there was no way I was going to bungle in the jungle. So I went into the Coast Guard. My father and my uncle were both Coasties. That was ’68.”

“My mom found me a Coast Guard post in Yakima first, but then I transferred every chance I got. I went to Puerto Rico and other places. But finally I ended up in Bellingham on a 65-foot tug. We did search and rescue, but we were so slow that usually the Anacortes boat got there first.”

“I was in Portland, Maine; and on a ship stationed in Kodiak on iceberg patrol just as the first sputnik was launched. My father died when I was up on the North Slope.”

Joe settled down for awhile on 60 acres just north of Kettle Falls. When the woman he had fallen in love with died, he made a box for her ashes. “That was be my first significant piece of art,” he said. “I took some of her jewelry — turquoise — and inlaid it into a wooden box. It was supposed to be a replica of a Viking ship. But that leads to another story... well, everything leads to another story.”

Joe leased his Kettle Falls place out for gold exploration and that gave him enough money to buy two lots on the Peninsula, maybe around 1995. When I ask when he started doing art in earnest, he pauses, “Time and I aren’t the best of friends. Let’s see, I didn’t start doing my art until about ten years ago.” But once he did start, he decided he was quite good. I have to agree; it looks to me like Joe could fix or make anything.

He started by showing a few pieces at the RiverSea Gallery in Astoria — “ray guns, trucks, big funky things” — and he would occasionally sell a few things to collectors. “I just started making things and somebody said wow! Then I had an interview on KMUN and I’ve had a couple stories in the local news.”

At some point Joe hit on a signature item — a miniature RV complete with a tricked out interior — that he calls the Canned Ham. “The first one was in a Peninsula Artists’ show and it sold the minute the doors opened. That’s when I decided I had a winner and that I had priced it too low.”

Joe bends a car license plate for the top of the Canned Ham and a motorcycle plate, which is smaller, for the doors. He has a form he uses to bend the metal; and he uses a drummel tool to cut out the windows. A cream of tartar can with its oval lid is outfitted as a sink, complete with faucet. There’s a trailer hitch on the front and even two propane tanks — metal film canisters. There are wheels, of course. And the one I saw at the Bay Avenue Gallery was complete with a resident guard cat sitting just inside the door.

As far as Joe is concerned making art gives him the best end of the deal. “What does the art do for me? It makes me feel useful,” he said. “I could sit here all day and watch football and NASCAR and OPB until my eyes bleed, but making something, that brings me a lot of joy, it’s gratifying.”

“I don’t produce a lot — things come in their time and if they don’t, they don’t — a Canned Ham trailer can take me six months. A lot of artists make their art because they need to, or they need to make a living, or are compelled for some reason. I don’t have any of those reasons — I do it because I feel like it.”

“My eyes always turn to interesting things,” he says as he picks up a black steering wheel knob lying next to him on a table. (Who knows what that will become.) “Being an artist was always there — I guess it’s in my genes.”