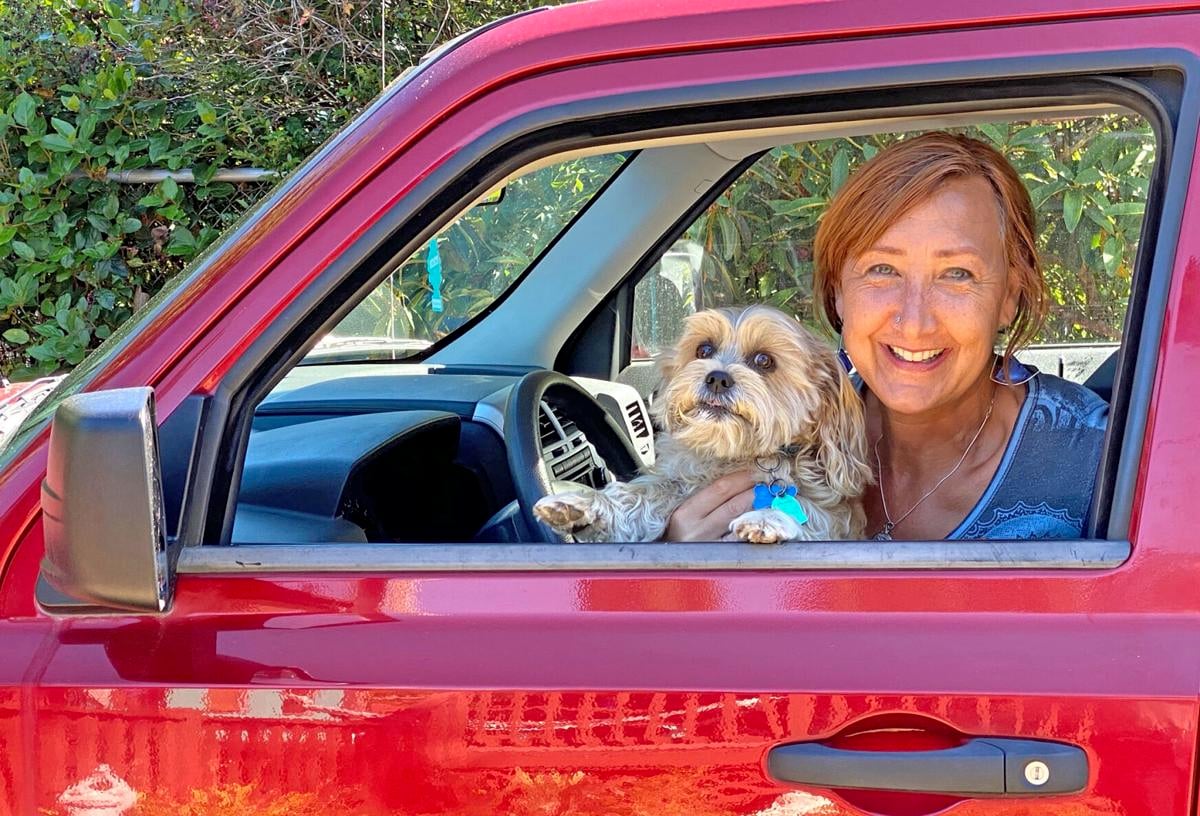 Beth Bauer and her companion Ozzie prepare for a cross-country road trip or, as she calls it, a ‘coddiwomple.’ 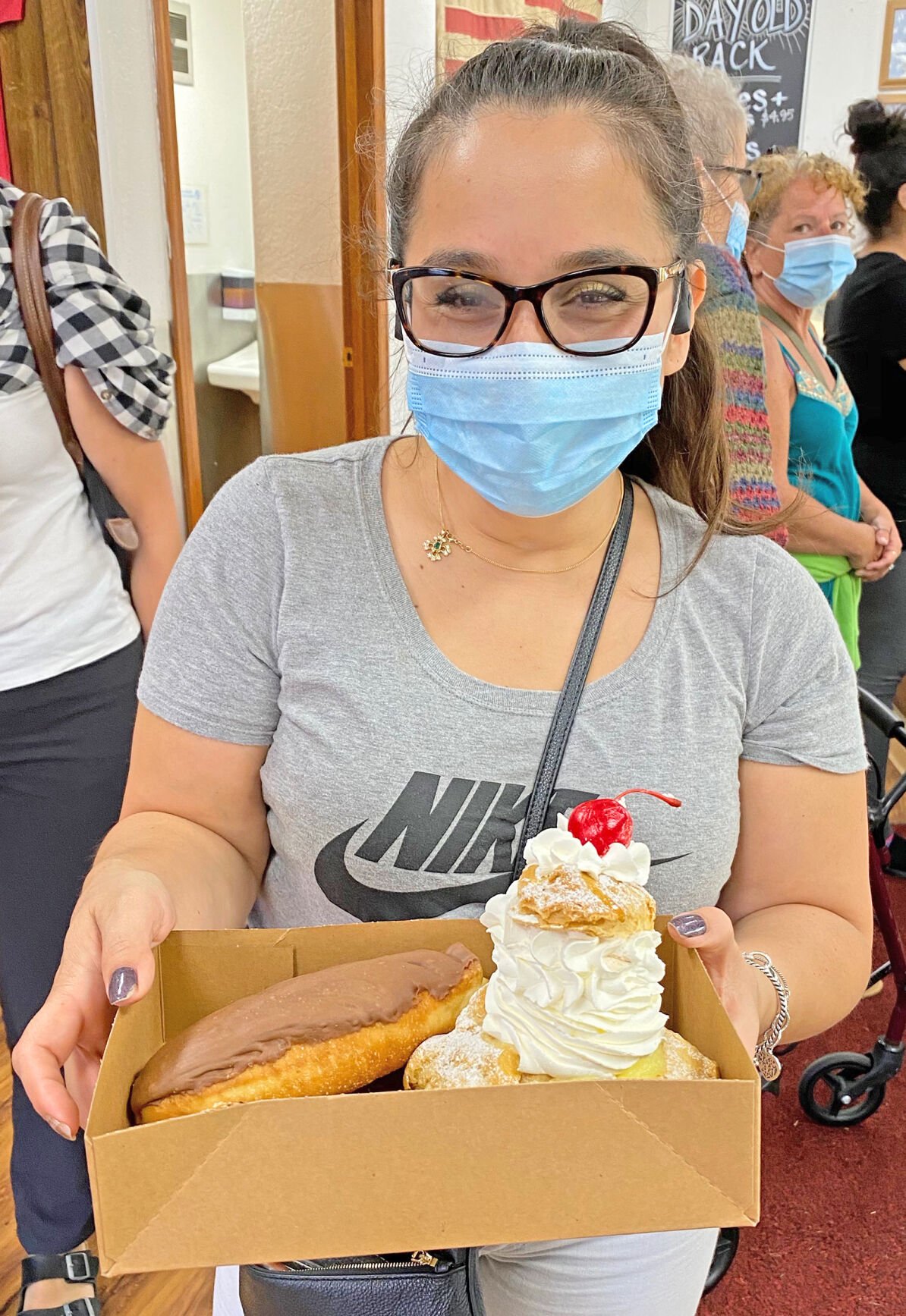 One satisfied customer with an incredible multi-story cream puff from Cottage Bakery.

Early in 2020 — pre-virus lockdown, when life was more-or-less “normal” — I published a story about the Jiva Yoga and Mindfulness Center coming to Ocean Park (CO link: tinyurl.com/Ocean-Park-Yoga). The visionary for this business venture is Beth Bauer: world traveler, adventurer, writer, and yoga instructor who studied in Rishikesh, India (where the Beatles found their guru). I spoke to Beth late in 2019 about her project, and by March she was in escrow to purchase the building for her dream business across from the Ocean Park post office at 25501 Vernon.

It may be hard to remember now, but between the end of February and mid-March, a mere two weeks later, the news about the virus took a decidedly serious turn. On March 15 Gov. Inslee announced a statewide shut down. Like many entrepreneurs, with both new and established businesses, Beth had several weeks of soul searching about what to do.

Perhaps as we look over her shoulder we too can fall in love with America again. We so need that right now.

Now, six months later, Beth and I are sitting outside at a distance from one another at a picnic table, talking about her decision. “After the March lockdown, I went up to Friday Harbor to visit my brother, a very successful businessman, to think this over. Did I want to proceed or not? I watched the news every day and looked for info on the Internet. How long would this virus last? Would my business be able to succeed? Everyone I talked to — my brother, my angel investor, my mentors — everyone said, ‘Go for it. Stay on the path.’ But I had a gut feeling.”

Beth has several degrees — one is a master’s in business administration. She balances this practical knowledge with a keen and abiding belief in spirituality. “On April 1st, my birthday, I was meditating and I just felt strongly, this is not the time to start my business. It was hard to understand because everything had worked so smoothly before — all the doors opened and everything fell into place so easily for my dream to happen. It seemed meant to be. But then, just as quickly, everything fell apart. I went through all the stages of grief, anger, bargaining. But finally I knew I had to let it go.”

We’ve all watched on the news or spoken to friends who’ve had similar business decisions to make. Some small businesses have closed or gone bankrupt; though many larger businesses are thriving — grocery stores have geared up as more of us cook at home; mail order behemoths like Amazon are booming; UPS has hired additional drivers to deliver the goods we want brought to our doorsteps. Some restaurants and cafes stayed open for take-out. Surfer Sands is thriving. “We’ve been busy all summer,” said one counter person. “Today, we’re sold-out of tuna fish.”

I spoke to Kaarina Stotts, owner of the Neptune Cinema in Long Beach. “When I bought the theater, Oct. 12, 2018, business was awful. The place was so run down, I said to myself, ‘Oh my gosh, what did I do?’ But we repainted, put in more insulation, and a better sound system, replaced the heating. Luckily, I’ve lived here my whole life — I owned Pioneer Market and my parents owned it before I was born — so I know lots of people and people know me. I got on Facebook and talked about all the changes, and then things just took off, people were consistently coming in. We had a ‘Frozen II’ premiere and we had so many people I ended up putting it on in both theaters and we still had to turn people away! We all dressed up as characters and our painter, Kathy Minish, made a big mural. Then we did ‘Star Wars,’ too, and Kathy painted face cut-outs for photo-ops. It was awesome!”

“Then covid hit and the theater had to close. It was a hard time,” Stotts says. “And even when we could open again, we were not getting first-run movies because no one was releasing them. Some were only being streamed. So even at 25 percent of our capacity — 50 people in the large room, 25 in the small one — we didn’t have the movies like we have now.” [Mainstream movies are beginning to be released to cinemas again.]

“We have survived because of our killer locals. We have some really, really loyal fans. Even when they couldn’t come in — they were afraid to or whatever — they were buying gift cards, or T-shirts and apparel. That got us through. I think we’ll be OK now with new releases arriving again. We have hot food, and you get local service. The covid hit was so unfortunate for so many people. It’s awful, awful! I’m grateful for the tourists, but it’s literally our locals that keep us going.”

As I said to Kaarina, seeing a movie on a big screen is such a different experience than watching on your laptop; so I was glad to hear that things are looking up for the Neptune. (For information, the number is the same as always: 360-642-8888.) On my way home I swung by the Cottage Bakery, now under new ownership and managed by Katie Witherbee-Allsup. There’s no covid-effect there: the place was hopping — 12 people in line and four or five people hustling around behind the pastry case.

Time for a coddiwomple

But not everyone’s so lucky. Back at the picnic table with Beth, I ask — now that she’s come to grips with losing her yoga studio dream — What’s next?

“For the last two years I’ve had no time to travel because I was building my business. I worked six days a week. But I love traveling, so Ozzie [her 10-year-old Yorky Shi Tzu mix] and I are going on an extended road trip across the United States. It feels much like it did when I was called to India.”

“I’m starting a coddiwomple. You know, that means ‘to travel in a purposeful manner towards a vague destination.’ And I do have a purpose: I want to fall back in love with America again. With the election, there’s been so much division, anger, and fear in our country. I haven’t felt too patriotic lately. So this gives me an opportunity to explore small-town America, make some new friends, see our natural beauty, find a sense of pride in my country again. Perhaps a book will come of it.”

“I love traveling on my motorcycle, but then I can’t take Ozzie with me, and he’s such a good companion. This will be a long trip, so we’ll go in my jeep and camp along the way — to the East Coast for the changing colors, then south to Florida and across to the West Coast again. I’m packing carefully because I’ll need warm and cold weather gear. I’m going to keep my eyes open for new opportunities along the way. And I’m taking my passport with me, in case they open the borders to Canada or Mexico. I’m going with an open mind and open heart to see what the next door has behind it.”

Beth is taking the trip many of us might like to take. Wouldn’t it be refreshing to pack a bag, lock the door, and go? Be open to what fate might have in store for us? Though most of us with elders to care for, kids to wrangle, or jobs don’t have that freedom, we can follow Beth’s adventures either at her blog https://thejourneyofbethb.com or on her Facebook page, https://www.facebook.com/JourneyBethB. Perhaps as we look over her shoulder we too can fall in love with America again. We so need that right now.