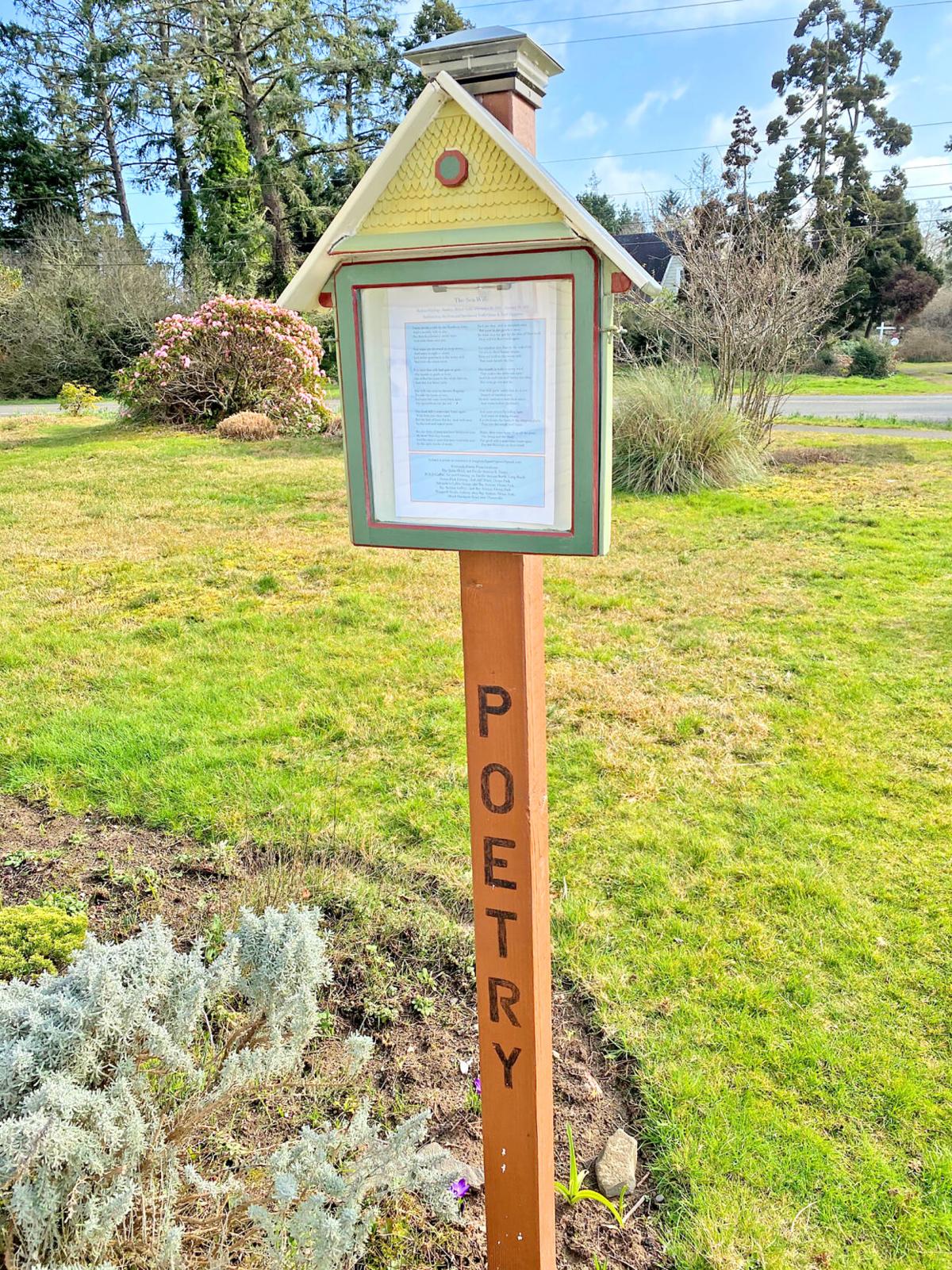 ”The power of words hasn’t gone away,” says Kevin Young. Check out one of the Peninsula poetry boxes to see why. 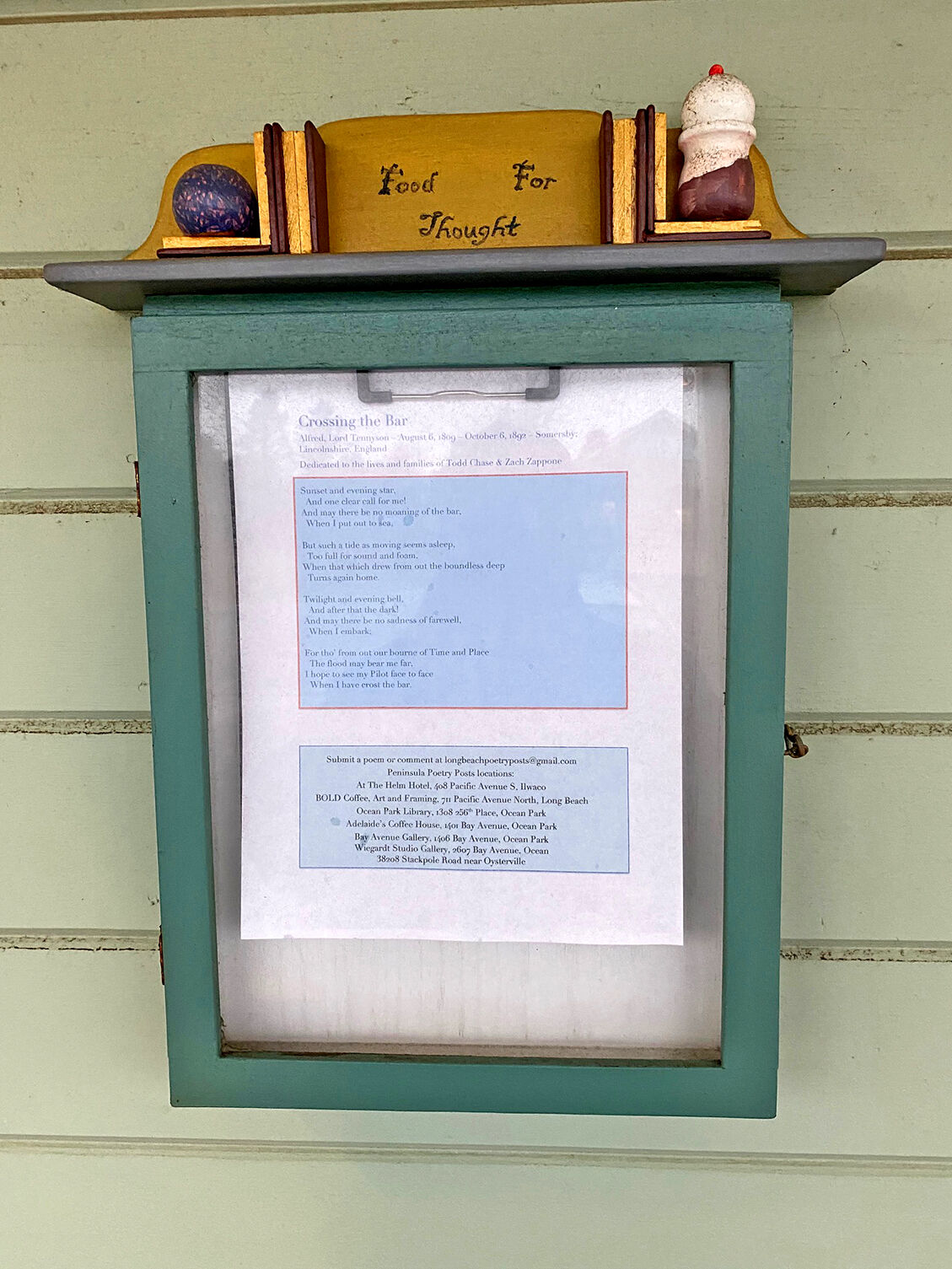 Look for a poetry box in a neighborhood near you.

“Poetry is the lens we use to interrogate

the history we stand on and the future

I had just exited Intersate 90 East heading to the Cle Elum Bakery when I heard that a verdict would soon be delivered in the Derek Chauvin trial. Unless you’ve been living under the bed since the shutdown, you probably know that ex-policeman Chauvin kneeled on George Floyd’s neck for nine minutes and 29 seconds killing him on the streets of Minneapolis. George, or Perry as his family called him, was face down on the cement, knee on his neck and wrists handcuffed behind his back, while two other officers pinned down his legs.

Without the video made by quick-thinking 17-year-old Darnella Frazier, the police’s initial report would have stood unchallenged. Titled “Man Dies After Medical Incident During Police Interaction,” it concludes simply “Officers were able to get the suspect into handcuffs and noted he appeared to be suffering medical distress. He was transported to Hennepin County Medical Center by ambulance where he died a short time later. No officers were injured in the incident.” (The full 188-word report: tinyurl.com/4mpxtwsw.)

There are several literary devices at play here. Let’s start with understatement. “To note” is an action that means to glance at and, in the most incidental way, notice something. It’s hardly the verb witnesses on the scene used as they watched George Floyd die. They testified that they pleaded for his life. They screamed, “You’re killing him!” They shouted, “He is not resisting, let him go!” and other perfectly appropriate and reasonable rejoinders. There was nothing incidental about George’s death throes, despite what the “officers noted.”

That he “appeared to be suffering medical distress” seems the height of understatement. In fact during the trial, pulmonologist Dr. Martin Tobin pinpointed the exact moment when George stopped breathing. As stated in a Slate article by Elliot Hannon, “Dr. Martin Tobin provided a powerful rebuttal and excruciating testimony Thursday outlining just how Floyd died — down to the very second his life was lost. Tobin, a Chicago-area pulmonologist with 40 years specializing in the science and mechanics of breathing, broke down the video of the arrest, explaining to the jury in plain terms what was happening to Floyd’s body over the course of the nine-and-a-half minutes that he testified left Floyd dead on the street.”

Understatement is often used in literature as a humorous device such that the reader understands the obvious gap between what is real and what is being minimalized. Here the understatement is treacherous. (PS: Floyd died under Chauvin’s knee — not “a short time later” in the hospital.)

I also love the creativity of “medical incident during police interaction” rather than “murder caused by police misuse of power,” or “death caused by police violence.” We might even admire, in some perverse way, the exceptional job this report writer did obliterating what actually happened. The power of words — for good or evil — is evident here.

The most astounding sentence in this report is probably “No officers were injured in the incident.” Well, thank goodness—we were all holding our collective breath waiting to hear that bit of good news! My last sentence is sarcasm, folks. I mean the opposite of what I wrote, as no one was waiting to hear whether the police were OK. Instead we wanted to hear how and why George Floyd died, his life evidently worth less than the $20 bill he tried to pass off at Cup Foods.

Is this shocking police report satire, sarcasm, or irony — or all three? Good friend and literary luminary Paul Nelson, founder of Seattle Poetics Lab (splab.org), offers some thoughts. “We’ve had the militarization of the police perhaps since the Reagan era when military surplus equipment and training began for our local police; and the assumption that the police are good people killing bad people.” This report simply reiterates that the “good people” were unharmed.

It’s certain this report writer did not intend to be satiric or sarcastic and surely had no idea how ironic these words would be after the truth came out.

It’s sad that we cheered for guilty verdicts against Derek Chauvin; but so many of us feel that justice was served. What’s unconscionable is that we were surprised by these verdicts when the guilt should have been obvious. What’s tragic is that this trial’s conclusion does not bring George Floyd back to his family and his community. It’s unsatisfactory for everyone involved. What will Chauvin learn in prison; will he be changed for the better? Will this case change police practices or future judicial procedures or is it simply an aberration? Will it help us as a nation deal with — and finally heal — intransigent racism?

In Elizabeth Bruenig’s article “Chauvin Was Convicted, but Suffering Remains,” (New York Times, 4/25/21), she writes “Pain lasts, grief lasts, anger lasts. The life you had before loss is never returned to you. There’s a hole in the world.” She continues, “I want to live in a world where it is possible to forgive and to be forgiven. I think it emerges not from a place of moral victory, but from the realization of human brokenness.”

So to the four kinds of justice — distributive (determining who gets what), procedural (determining how fairly people are treated), retributive (based on punishment for wrong-doing) and restorative (attempting to restore relationships to “rightness”) — I am going to posit a fifth by creating a new definition for “poetic justice.”

Poetry is transformative — it may be one of our most powerful tools, and you only need “poetic license” to pack it.

Let’s imagine poetic justice involves forgiveness, understanding, empathy, even beauty. Let’s imagine that poetry can restore us to ourselves and to our own humanity. Let’s imagine we can use the power of words to heal, as Amanda Gorman believes, “Somehow we’ve weathered and witnessed a nation that isn’t broken, but simply unfinished.” Kevin Young, the new director of the Museum of African American History and Culture, agrees, “A good pot of collard greens won’t cure everything, but it will cure a lot. Poetry does some of the same things. The power of words hasn’t gone away.”

It’s not too late to add a little poetry to your life this month. Poet Anthony “Tony” Pfannestiel started a great project before the pandemic hit: the installation of poetry boxes up and down the Peninsula. He and others have both created these beautiful receptacles for words and refilled them monthly.

You may not have noticed these around town, but now you have no excuse. Steve Kovach is the poetry tender for At The Helm Hotel, 408 Pacific Avenue S, Ilwaco; the Wiegardt Studio Gallery, 2607 Bay Avenue, Ocean; and the Timberland Ocean Park Library, 1308 256th Place, Ocean Park. Shelley Weaver tends the poetry box at Bay Avenue Gallery, 1406 Bay Avenue, Ocean Park. Janice Thompson keeps up Abbracci’s (now defunct coffee house), 408 Pacific Avenue across from Marsh’s Free Museum in Long Beach.

Tony refreshes the one in front of his house at 32402 J Place in Surfside; another at BOLD Coffee, Art and Framing, 711 Pacific Avenue North, Long Beach; Adelaide’s Coffee House, 1401 Bay Avenue, Ocean Park; and 38208 Stackpole Road north of Oysterville. Port of Peninsula in Nahcotta will soon install another poetry box as well as the RE/MAX real estate office in Ocean Park.

If you’d like to make a poetry box, fill one monthly, or help out in any way, give Tony a call at 503-720-6786 or email him at tonypfan@aol.com. Poetry is transformative — it may be one of our most powerful tools, and you only need “poetic license” to pack it.