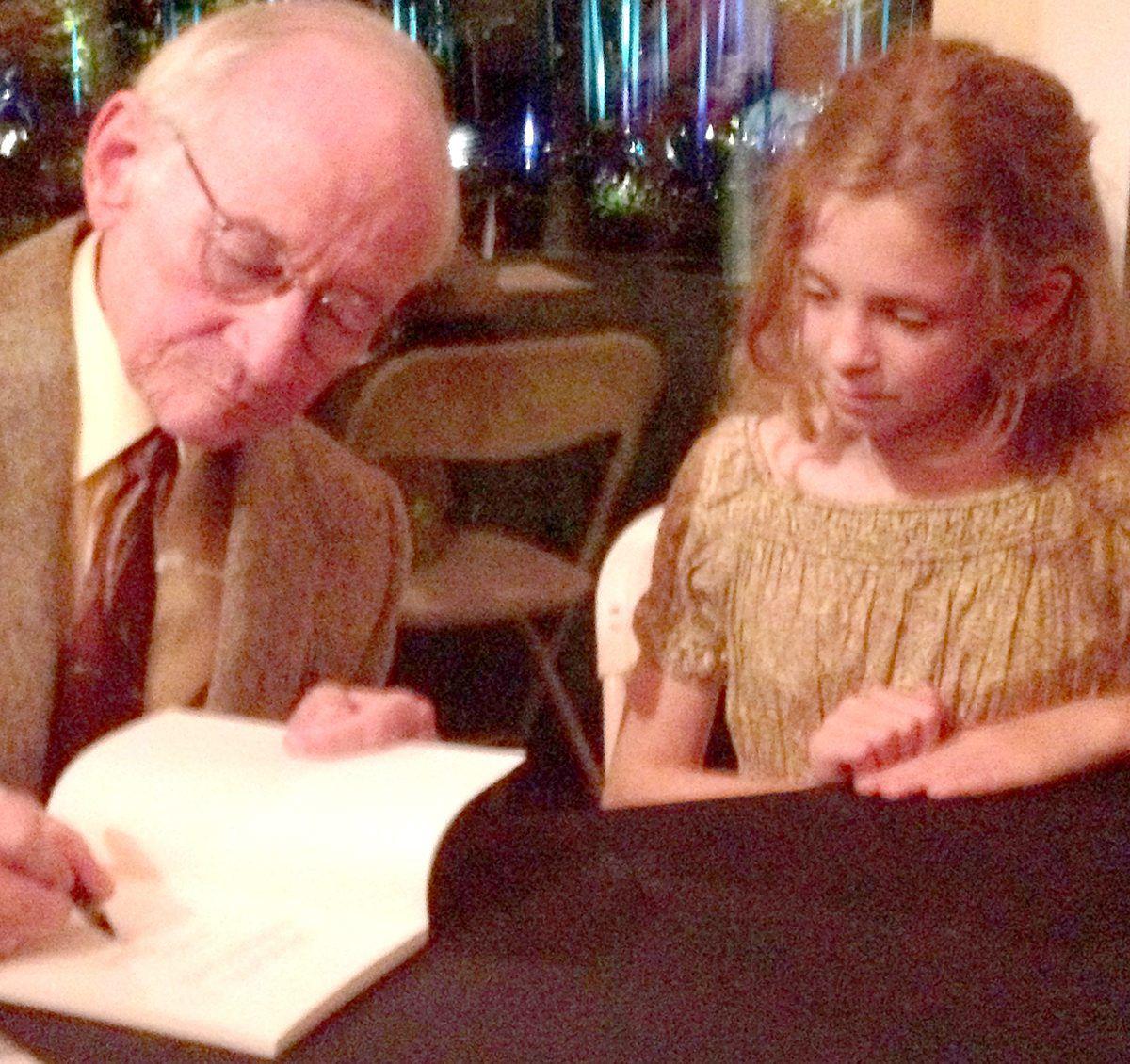 Past poet laureate and Pulitzer prize winner, Ted Kooser, signs his recent book for Abbie Chipps, Eckstein Middle School, who read her poem “Rain Birds” before Ted came onto the stage in a Seattle Arts and Lectures event. 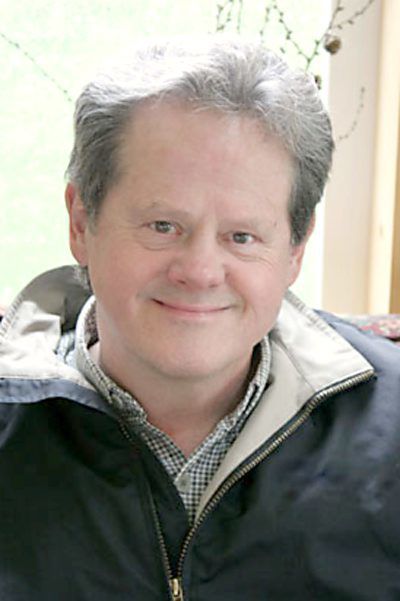 James “Jim” Bertolino has published 25 books of poetry; his work has appeared internationally in books, magazine and anthologies during the past 40 years. He will be reading with our legendary local, Robert “Bob” Pyle on Oct. 12 in Oysterville.

Past poet laureate and Pulitzer prize winner, Ted Kooser, signs his recent book for Abbie Chipps, Eckstein Middle School, who read her poem “Rain Birds” before Ted came onto the stage in a Seattle Arts and Lectures event.

James “Jim” Bertolino has published 25 books of poetry; his work has appeared internationally in books, magazine and anthologies during the past 40 years. He will be reading with our legendary local, Robert “Bob” Pyle on Oct. 12 in Oysterville.

Last week past U.S. poet laureate and Pulitzer Prize-winning poet Ted Kooser read from his latest book, “Splitting an Order” (Copper Canyon Press, 2014) at the Chihuly Glass Garden in Seattle. The evening was nearly balmy as the dusk light settled over the guests wandering the garden. Otherworldly glass objects, like plants from outer space, erupted from the earth and gradually took on dramatic lighting from within; the colors of the sunset tinted the clouds over the Science Center arches on the western horizon before fading to dark.

It seemed a perfect setting for poetry: a magical combination of the natural world — the real plants in the garden are well-tended and luscious — set beside stunning man-made creations. Many criticize Chihuly, who only designs and doesn’t any longer craft his glass forms, but I was stunned by their beauty. (And I also understand that it would take decades for one man to create the array and volume of glass pieces that fill this space.)

Retuning to the interior of the conservatory, we looked up through the glass ceiling past Chihuly’s floral disks of orange and red floating over our heads to the eerie Space Needle shining above us. Then we all settled into our seats.

Into this mesmerizing ambiance walked Ted Kooser, a tiny man in a gray suit and tie, hardly taller that the microphone at the podium. An enormous ball of glassy yellow snakes and curling spires was the lighted backdrop behind him so that his head seemed to be bursting, Medusa-like, with poems spoken aloud.

Kooser’s poetry, which I admit I hadn’t read before, couldn’t have been more in contrast to the dramatic sci-fi setting. Ted writes about everyday occurrences and objects with a loving linguistic precision that allows his audience to experience them anew, to understand them for the tiny miracles they are. Here’s one of his poems to illustrate:

By the toe of my boot,

one drop of the earth’s milk,

I held it to the light

and could almost see through it

into the grand explanation.

Put it back, something told me,

Put it back and keep walking.

Kooser has no pretensions of grandeur, no haughtiness or exclusivity. Opening for Ted was the fifth grade student-poet Abbie Chipps, who last year worked with our state poet laureate Kathleen Flenniken. (I have had the honor of workshopping with Kathleen and I recommend her book “Plume,” about the ambivalence she felt growing up in the shadow of Hanford). Poets-in-the-schools is a program that fell to the axe decades ago but was a robust investment in our youth in the 70s when there was monies for bringing artists and art expression to our young citizens. In some states it is being modestly revived. Chipps read a poem about watching raindrops on the window, a decidedly Seattle activity, and a fitting introduction to Ted’s work.

Kooser’s light touch, his ease with language, and unpretentiousness — no highfalutin vocabulary for Ted — put me in mind of a question I’ve been asking myself lately. It seems only poets read poetry anymore. Do we still need poetry? I suppose most of us remember memorizing a few lines from Tennyson or Shakespeare and being forced to wander through a painful exhibition of erudition from some earlier grade; and we’re just grateful to be released from that requirement as we make our way in the “real world,” leaving poetry and its irrelevance in the dust bin of elementary school.

But — full disclosure: I must admit as a poet I hope for a revitalized role for poets in our society — can we bring poetry back into our lives? Is poetry still useful to us in the 21st century? I want it to be.

This weekend Peninsulites have a chance to judge for themselves when lepidopterist, author and naturalist Bob Pyle reads poetry with accomplished Bellingham poet and friend Jim Bertolino at Sydney and Nyel Stevens home, Oct.12, Sunday, 3 p.m. (RSVP required please at 360-665-4716).

Bob’s work is well known to most of us. He’s a writer devoted both to the natural world and to us (even when misguided) humans who share the earth with our fellow creatures. Bob has been talking about the magic of our natural world for decades in the fashion of a salute to a beloved — with tenderness, intimate knowledge and dedication. Bob will be reading from his recent book of poetry “Evolution of the Genus Iris” (University of Washington Press, 2014).

Jim, in similar fashion, has found a secure place for himself in the midst of our unique Pacific Northwest literary eco-culture. He says, “I met Bob many years ago when the owner of Village Books in Bellingham invited us both over for some adult beverages. We hit it off immediately and have kept in touch. I think we both have a certain sensitivity to nature — we have that in common. He’s come up here often to read.”

“And I know Oysterville,” he continues, “first as an invited Espy artist, and then as part of the new residency Willapa Bay AIR. I was an art major in the ‘60s in Madison, Wisconsin, but I was already beginning to get my poetry and short stories into print, so I shifted my major to English.”

Jim is now retired after teaching English and creative writing for 36 years in various institutions, many of those years at WSU. He will be reading from “Every Wound Has a Rhythm” (World Enough Writers, 2012), his most recent collection.

In our current world — Louisiana loses one acre of land a day to the sea; we lost 2,275 square miles of Brazilian rain forest last year; to date, homo sapiens have caused the extinction of 50 percent of the world’s creatures — we need poetry, if only to express the grief of loss. And, of course, we could go on ad nauseam with debilitating facts of devastation: natural, social, political, and spiritual. I suggest you make a modest commitment to your own revitalization by listening to two remarkable and inspiring poetic voices calling out in the wilderness.

May you always have art to charm your days,

a sensible hearth, and friends as dependable

as gravity. May the wind and creatures

be as music to your evenings alone,

and may your dreams leave you renewed.

May you have an appaloosa to ride the outline

of blue hills, and nothing that sickens,

and no black sticks.